Ruth E. Whitfield’s survivors expressed their grief but also their resolve Monday in defeating once and for all the racial animus that led to the shooting deaths of their 86-year-old matriarch and nine other people in a Buffalo grocery store.

“We make no apologies for our suffering and our pain. You can see it,” said Garnell W. Whitfield, one of her sons and a former Buffalo fire commissioner. “We are not going to apologize for that. But we are not just hurt. We are angry. We are mad. This shouldn’t have happened.

“We do our best to be good citizens, to be good people. We believe in God. We trust in him,” Whitfield said. “We treat people with decency. And we love even our enemies.”

But he and the family, along with a trio of lawyers now working for them, said Monday that the nation can tolerate no more mass killings, especially one that bubbles up from bigotry, white supremacy and hatred. One of their attorneys had already mentioned the case of Dylann Roof, a white supremacist convicted in the shooting deaths of nine African Americans at a church in Charleston, S.C., in 2015.

“You expect us to keep doing this over and over again,” Whitfield said, “forgive and forget while the people we elect and trust in offices around the country do their best not to protect us, not to consider us equals, not to love us back. What are we supposed to do with all this anger and all this pain?”

The Whitfields appeared at a news conference led by civil rights attorney Ben Crump, who has developed a national profile representing families victimized by prejudice and racial animosity. For example, he leads the legal team working on behalf of George Floyd’s family.

“We have to get at the root of the hate,” Crump said, blaming the cable commentators who stoke white resentment, politicians who capitalize on it and the fringe websites that give the believers a platform. Crump said the rhetoric resulted in an 18-year-old white supremacist firing his rifle at people of color in a predominantly Black Buffalo neighborhood hours from his mostly white hometown.

Charged with first-degree murder is Payton Gendron of the Southern Tier town of Conklin, near Binghamton in Broome County. He had earlier posted a diatribe that laid out in more than 180 pages how he came to embrace a racist conspiracy theory and why he wanted to kill. He then recorded himself carrying out the attack at the Tops Markets on Jefferson Avenue, where Ruth Whitfield stopped for a few items after her daily visit to her husband in a nursing home.

“Even though they did not pull the trigger, they did load the gun,” Crump said of the pundits, politicians and social media managers he says played a role in shaping the gunman’s actions – “the people who curate the hate,” as he put it. But Crump stopped short of saying those people would be named as defendants in a lawsuit on the family’s behalf.

Instead, two lawyers also working for the Whitfield family, Terrence Connors of Buffalo and Ken Abbarno of Cleveland, told reporters they would drill down on the red flags that were not acted upon and the methods that enabled a young adult to possess a military-style rifle, even after he had caught the attention of authorities in Broome County for threats made against his high school.

Though a federal law protects gun-makers from liability when crimes are committed with their products, Connors once pushed a lawsuit against a gun dealer and a gun manufacturer after a bullet halted a Buffalo youth’s promising basketball career. The case led to an out-of-court settlement, Connors said.

“Why is it that this 18-year-old with a mental health history can buy an AR-15?” Connors said. “How did this evil get so far in its journey?”

Harris will travel to Buffalo to attend the funeral of Ruth E. Whitfield, who at age 86 was the oldest victim of the May 14 mass shooting at t…

Watch now: Garnell Whitfield speaks about the death of his mother, Ruth

Retired Buffalo Fire Commissioner Garnell W. Whitfield, whose mother was one of the victims in Saturday's mass shooting at Tops, was joined by…

Harris and her husband were among several officials who attended the funeral of Ruth Whitfield at Mount Olive Baptist Church in Buffalo. 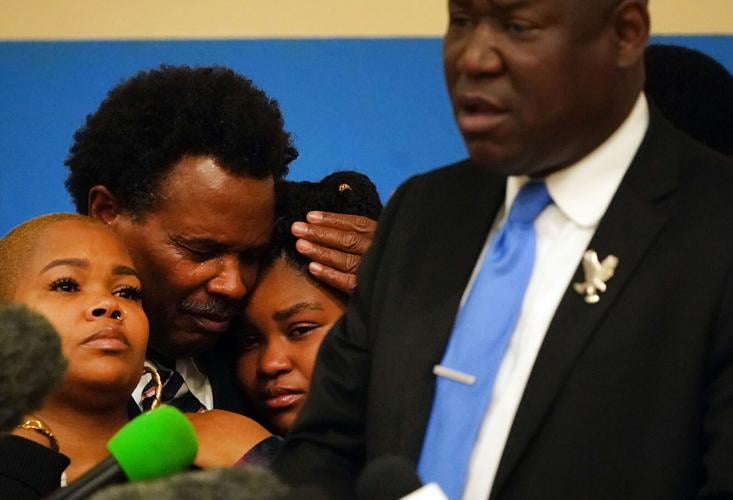 The family of Ruth Whitfield and their attorney Ben Crump, right, speak with the media at Durham Memorial A.M.E Zion Church in Buffalo Monday, May 16, 2022. 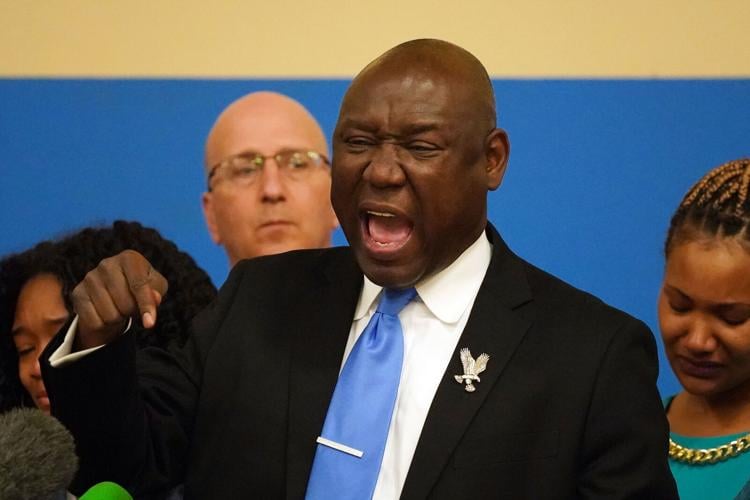 Ben Crump, attorney for the the Family of Ruth Whitfield speaks with the media at Durham Memorial A.M.E Zion Church in Buffalo Monday, May 16, 2022.