Ruth Bader Ginsburg, unbowed by cancer, brings audiences to their feet
0 comments
Share this
Support this work for $1 a month
1 of 7 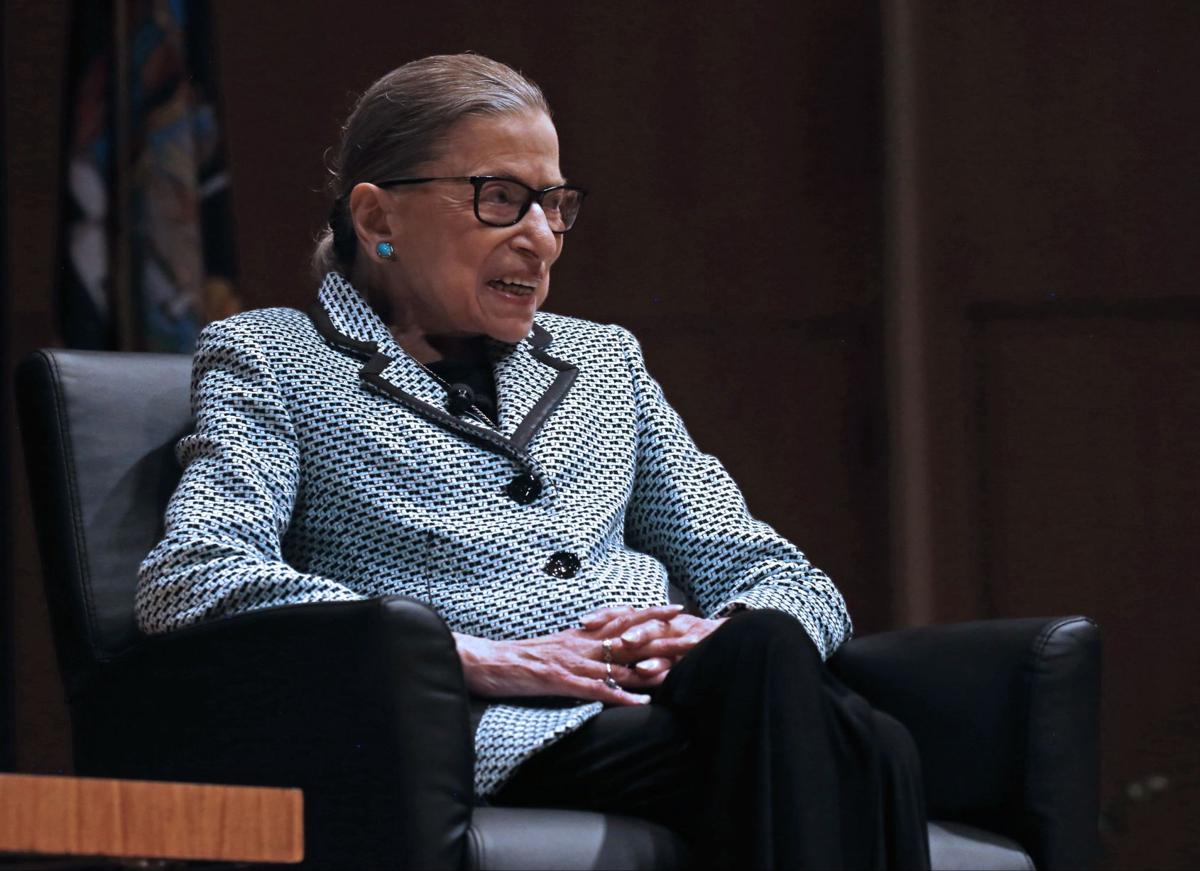 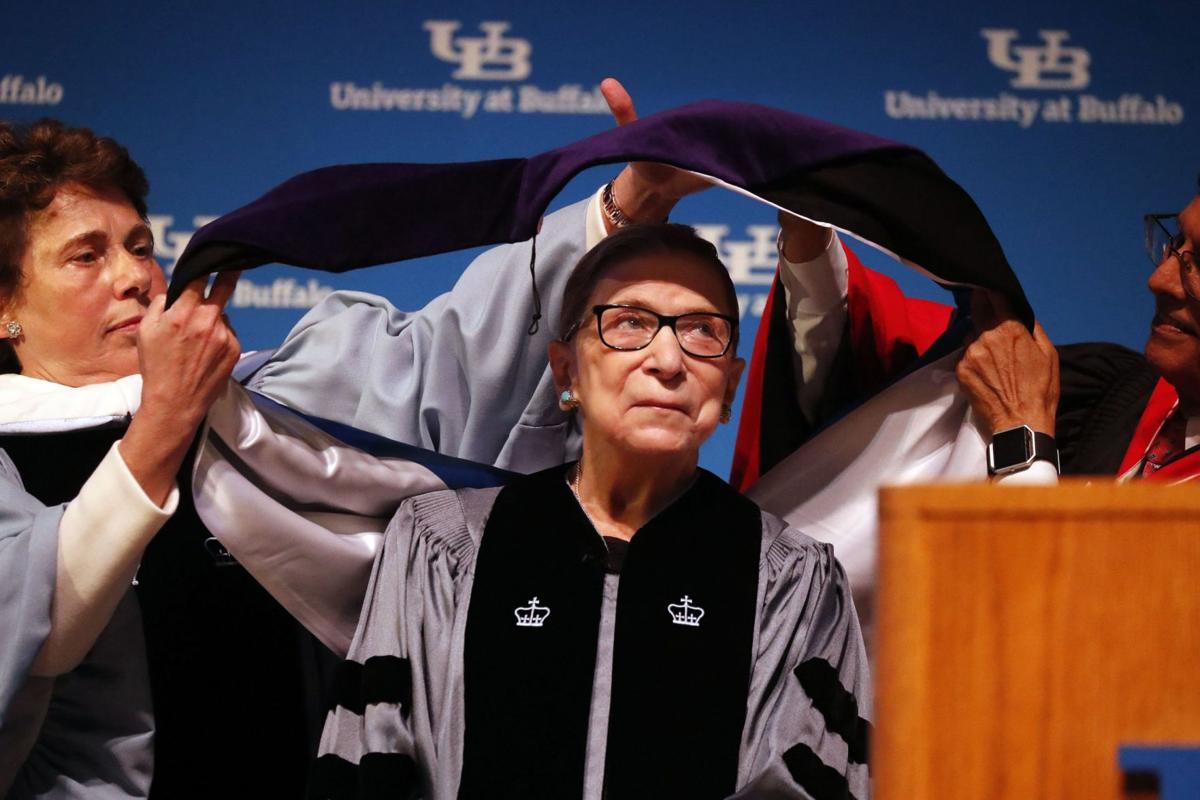 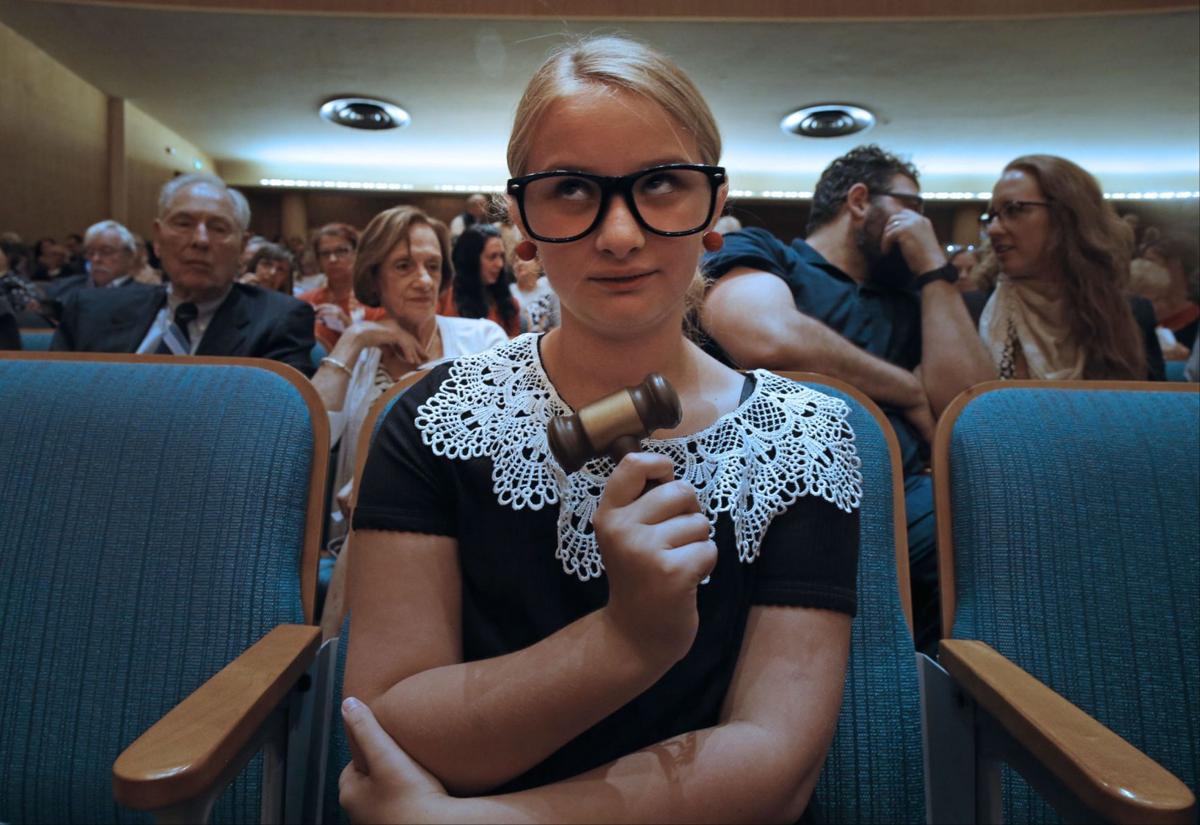 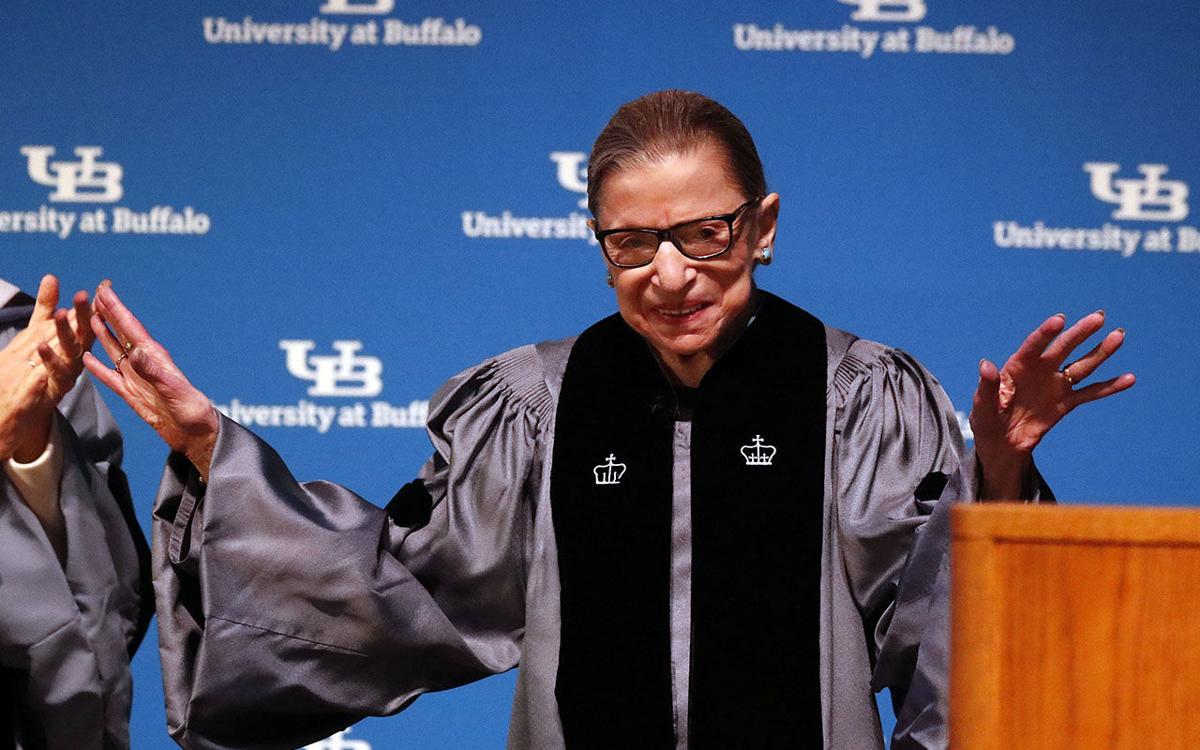 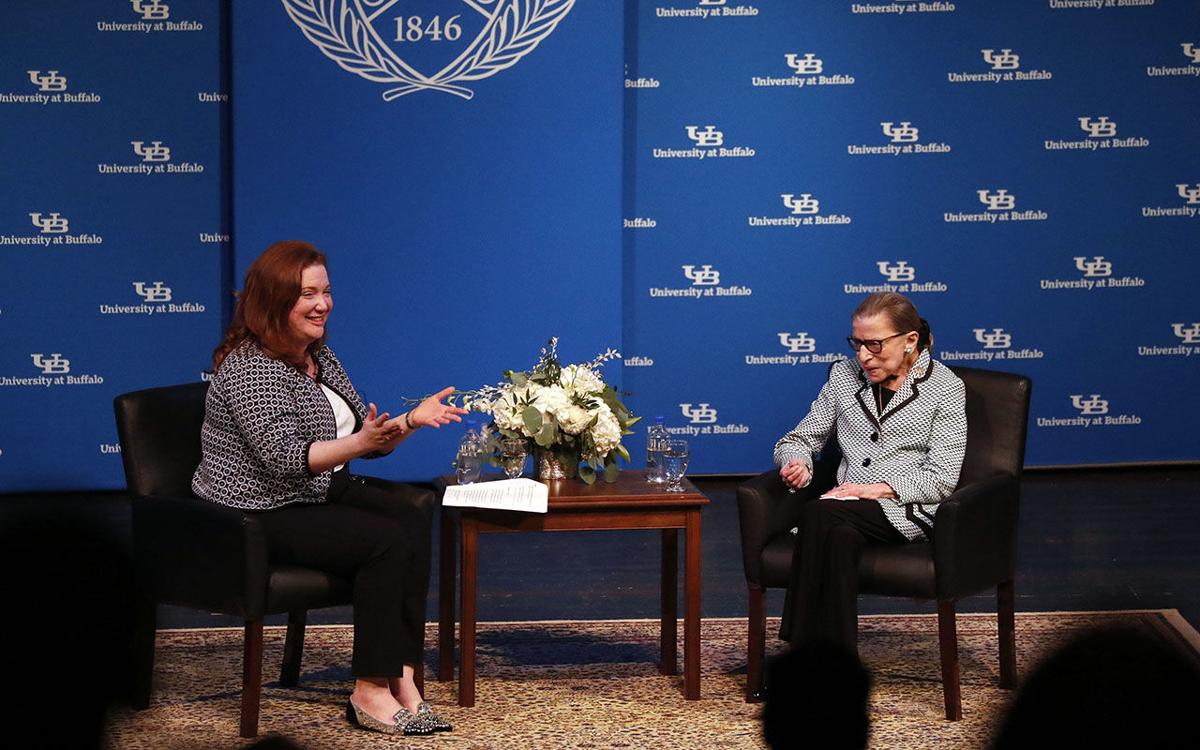 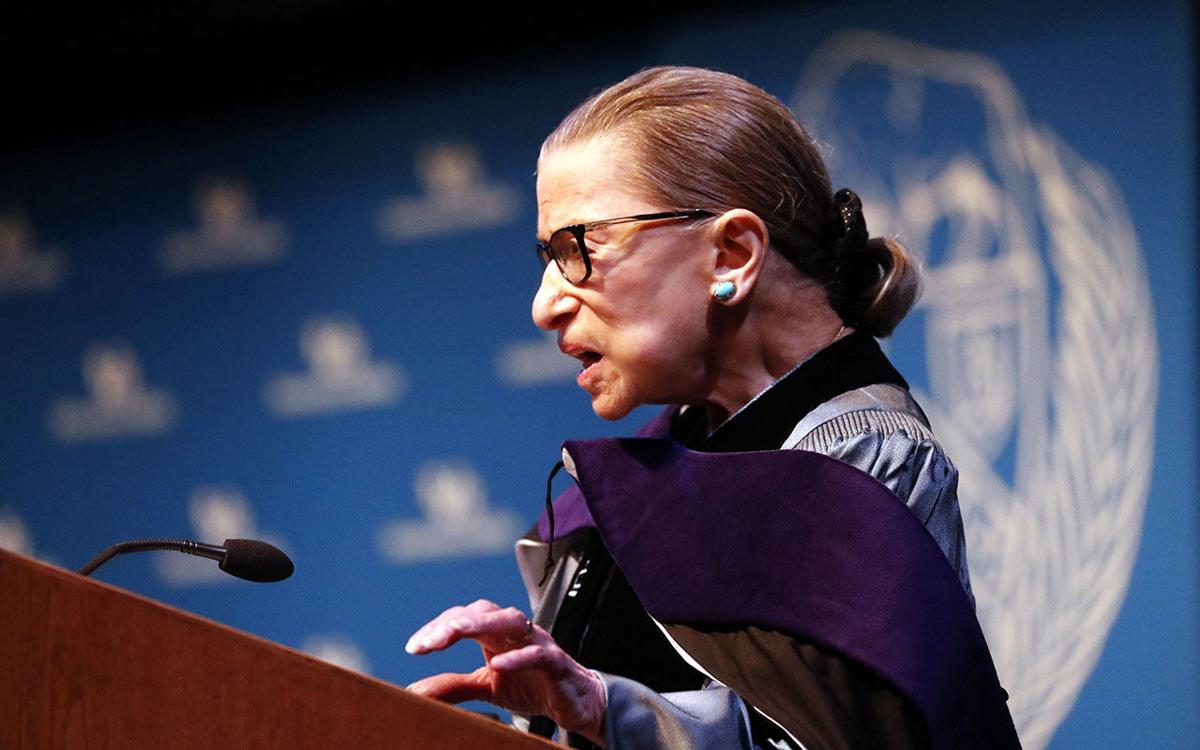 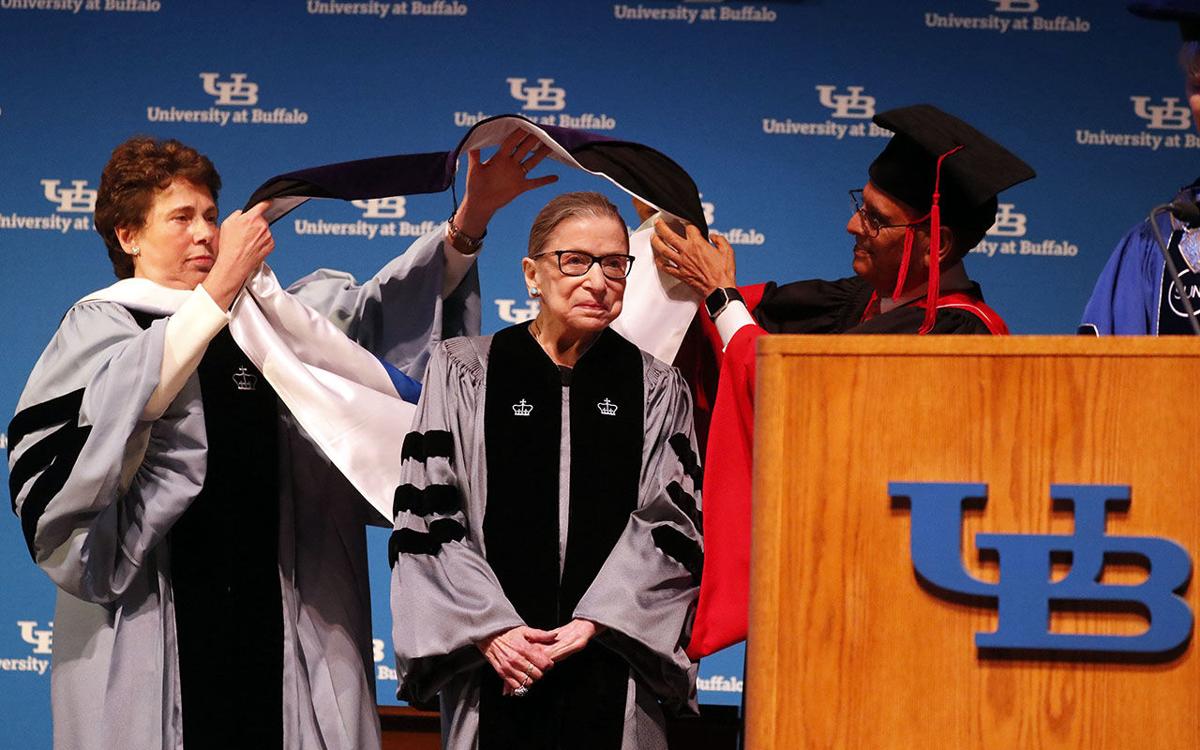 U.S. Supreme Court Justice Ruth Bader Ginsburg has had a storied life as one of the pioneers among women who entered law in the early 1950s at a time when she, as one of nine women in a class of 500 at Harvard Law School, was barred from entering the periodical room merely because she was a woman.

It was among many stories Ginsburg shared with a packed crowd in Kleinhans Music Hall over an hour's time Monday evening.

As Aviva Abramovsky, dean of the University at Buffalo Law School, observed, Ginsburg's work has helped build the foundation of equality for all women.

First appointed to the U.S. Supreme Court in 1993, she was only the second woman on the bench after Justice Sandra Day O'Connor, who Ginsburg recalled as taking on the role of "big sister to her."

Ginsburg recalled that one of the first cases assigned to her by then-Chief Justice William Rehnquist was an extraordinarily tough and tedious one, which was not the usual protocol for associate justices newly appointed to the court, she recalled.

"Ruth, you just do it. Otherwise, you're going to risk getting another unpleasant case," she recalled O'Connor advising her.

Just getting it done, and getting it done well, was a pressure Ginsburg said she felt very early, even in law school. If women didn't perform well in that arena, she said, it tended to reflect poorly on their whole gender, she said.

"And you felt like you were constantly on display," Ginsburg said.

As more women started coming into the profession in increasing numbers, others gained the courage to enter law school, she said, recalling that 1972 was a watershed year.

"Law schools around the country were concerned about losing male students to the Vietnam draft, so there was an over-admittance of women," Ginsburg said.

She described it as "exhilarating" to see women today in the profession as faculty and deans of law schools, as well as students.

"The closed-door era is indeed over," Ginsburg said. "No, it's not perfect, but how far we have traveled."

Ginsburg even recalled the journey to striking down gender-based laws, recalling a 1961 case in which a battered wife in Florida struck her abusive husband over the head with a baseball bat during a physical confrontation.

"It was the end of the fight and the start of a murder prosecution," she said, noting the woman was eventually convicted by an all-male jury."By the end of the 1970s, almost all of the explicit gender classification laws were over,"  Ginsburg said.

Asked about the U.S. Supreme Court nominating and approval process, she said it is far more partisan today.

In 1993, she said, there was a "true bipartisan spirit" in the U.S. Senate. Even so, there were some among her supporters who were worried about her connections to the American Civil Liberties Union. However, not one question about those connections came up during her Senate hearings. Republican Sen. Orrin Hatch of Utah was in her corner then, she said.

"Today, he would not be," Ginsburg added.

She expressed hope for a return to a more bipartisan approach in government.

"Enough of this dysfunctional legislature. We're supposed to serve the people of the the United States," Ginsburg said.

She also expressed her distaste for the idea of expanding the Court from its current nine members.

The evening was held in Kleinhans in honor of the late Wayne Wisbaum, an attorney and former Cornell University classmate of Ginsburg's who served as president and board chair of the Buffalo Philharmonic Orchestra and Kleinhans Music Hall Management. He was a grade below her, but they stayed in touch over the years, she recalled.

"Every time he came to D.C. to attend the American Law Institute ... he used to say the same thing: 'Please come to Buffalo.' And he was persistent,"

"It is to my great sorrow that he is not here with us this evening, but when I promised him I would come, I didn't know this day would be preceded by three weeks of daily radiation. Like I said, I will not cancel Buffalo,"

"It's so beautiful. What an extraordinary concert hall," she said of Kleinhans.

Ginsburg may have recently completed radiation treatment for a pancreatic tumor, but you would never have known it from listening to her speak Monday morning at UB.

Thoughtful, sharp and witty, Ginsburg reflected on her pop culture status as the “Notorious RBG,” noting that she and rapper “Notorious B.I.G.” both hail from Brooklyn.

"I am now 86 years old, yet people of all ages want to take their pictures with me," she said after receiving an honorary degree from UB at the campus’s Center for the Arts.

In her opening remarks on the first day of the fall semester, she recounted how her friend, conservative Justice Antonin Scalia, wrote the lone dissenting opinion in the Virginia Military Institute case, stating that women should not be allowed entry to the military college, which had a male-only admissions policy until the Supreme Court forced a change in 1996.

"As an illustration of our friendship, he came to my chambers one day, and he threw down a sheaf of papers and said, 'This is my penultimate draft of my VMI dissent. I’m not yet ready to circulate it to the court, but I want to give you as much time as I can to answer it.'"

That dissent ruined her weekend, she said, "but I was certainly glad to have the extra days."

She also recounted how Scalia and she were both opera lovers and how Scalia contended that Italian opera was the best. So Ginsburg invited him to see the German opera “The Valkyrie” at the Metropolitan Opera House.

“It was somewhat of a risk on my part because Valkyrie runs maybe five hours, but he was impressed,” she said.

Dan Caves, a second-year UB law student, was one of several who said they found the story of Ginsburg and Scalia's friendship inspirational.

“We live in such difficult times right now,” he said. “It gives us hope. It gives us a model of what we can accomplish together if we just set aside our differences. Not everything is politics.”

Abisha Vijayashanthar, who is in her last year of law school, was struck by the same thing. If Ginsburg can find common ground with her political opposite, she said, “It just shows we can all do it.”

Ginsburg recounted the many women and professors who helped pave the way for her ascent to the Supreme Court, starting with her childhood role models: aviation pioneer Amelia Earhart and fictional girl detective Nancy Drew.

Her appearance at the UB North Campus in Amherst was the beginning of a day of events for Ginsburg, who spoke with law students and members of the Western New York law community after her morning appearance before faculty, staff and students.

“She remembers everything,” he said. “What a mind.”

Ginsburg stood as a hood was draped over her and she received her honorary degree. She also stood to make some short remarks, expressing her sorrow that Wisbaum was not there to see it.

She then took a seat and answered questions on stage from Aviva Abramovsky, dean of UB's Law School.

Long before Ginsburg was even scheduled to take the stage, seats in the Center for the Arts were filling up. Tickets to the morning event sold out within 15 minutes, Tripathi said.

"I was on a wait list," said Debbie Lowe, who works in the UB School of Management. "I was able to get one ticket."

Ginsburg studied law at Harvard and Columbia universities, graduating first in her class in 1959, but no New York City law firms would offer a job to a woman. During the 1970s, she argued a number of women’s rights cases at the Supreme Court.

Recently, Ginsburg's profile has risen through the movie "On the Basis of Sex," the documentary "RBG" and "Saturday Night Live" parodies.

"To see her speak is the opportunity of a lifetime," said Eileen Marutiak Yildirim, an alumna and member of the Alumni Association's board of directors.

"I'm excited just to be in the same room as her," said third year law student Erica Chiodo.

It was announced on Friday that Ginsburg underwent treatment this summer for a malignant tumor discovered on her pancreas.

When Abramovsky asked what advice Ginsburg had for other judges, Ginsburg said it was important to be patient and compassionate.

"The law doesn't exist somewhere in the sky," she said. "It exists to govern society. Law exists to serve that society ... to help keep society operating peacefully. I think it’s important to realize that law is not some sort of abstract exercise. It affects real people, and judges should be cognizant of how law affects the people that law is meant to serve."

Gov. Andrew Cuomo announced a statue of Ginsburg will be erected in her native Brooklyn.