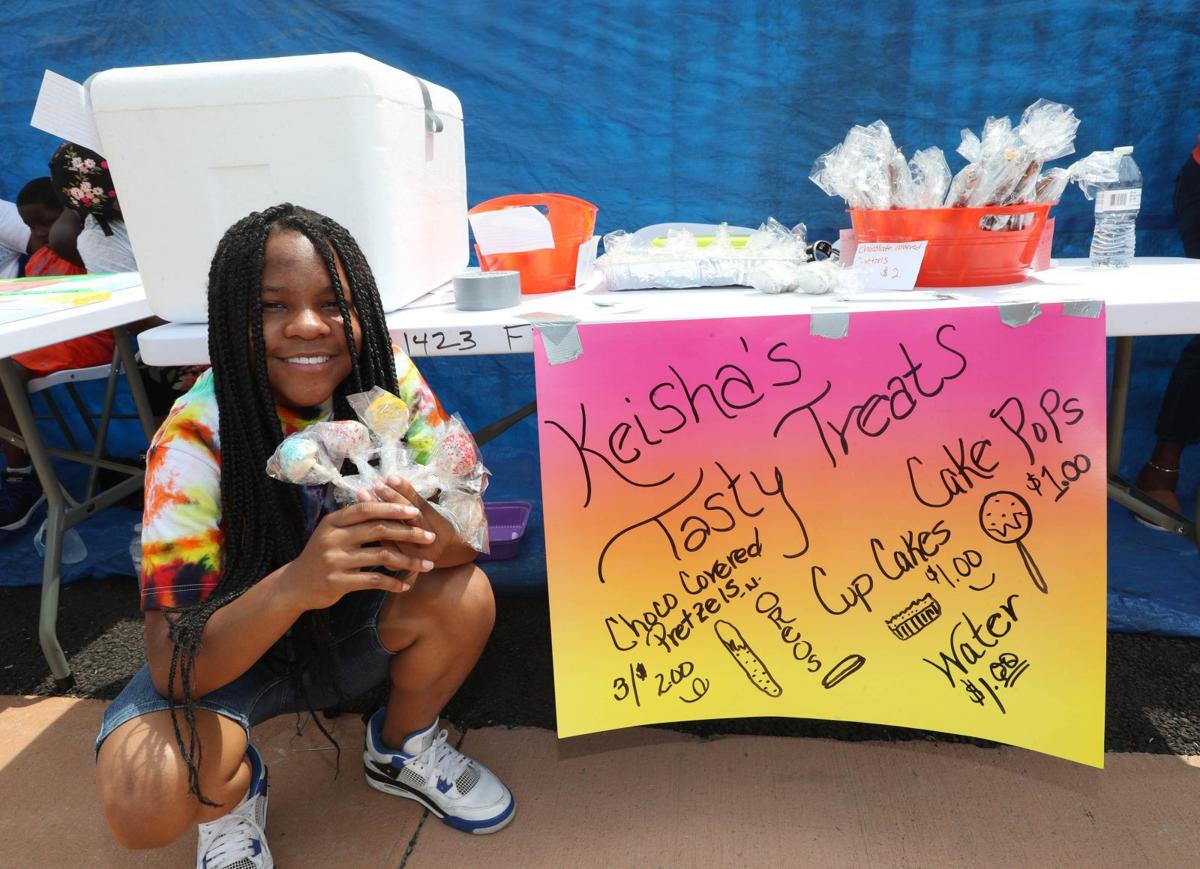 Mikeisha Frazier shows off the cake pops and other goodies she sells as part of the Youth Entrepreneurship Marketplace each Saturday on Fillmore Avenue. (Sharon Cantillon/Buffalo News) 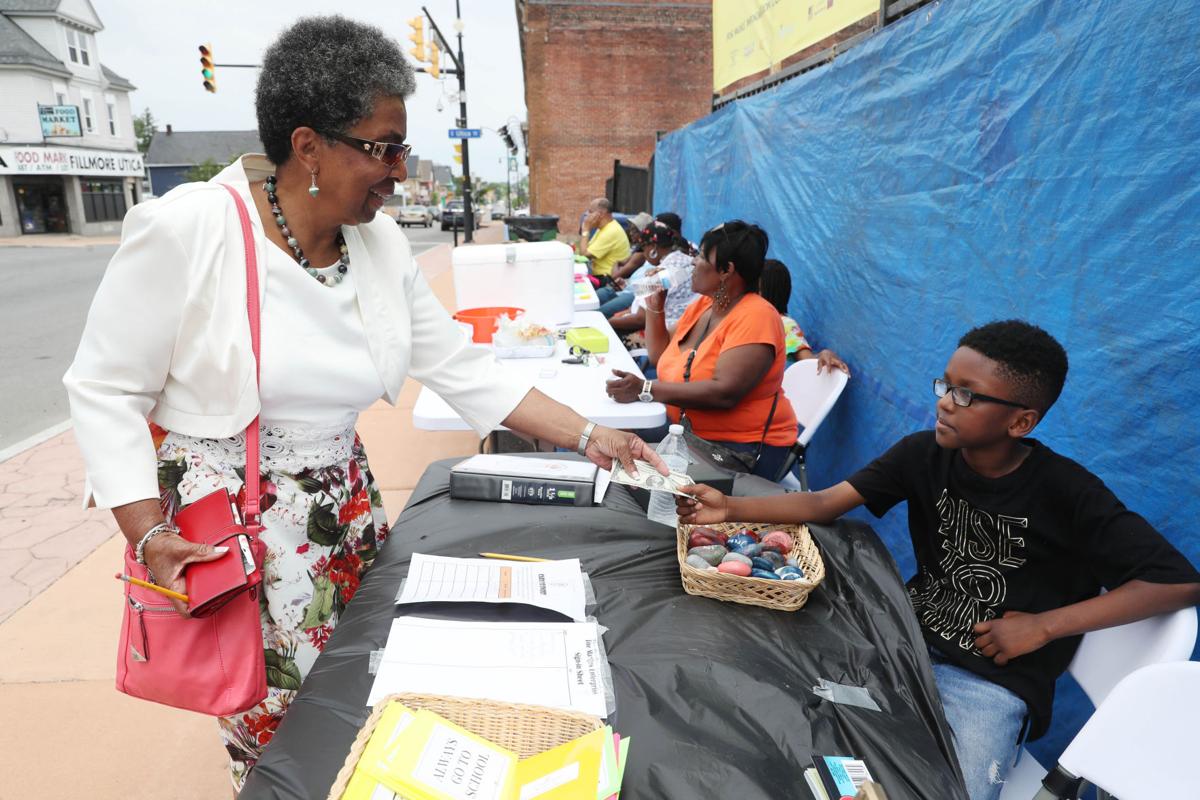 MarQes Diallo, 9, does business with customer Patricia Dupree as part of the Youth Entrepreneurship Marketplace that sets up each Saturday on Fillmore Avenue. (Sharon Cantillon/Buffalo News) 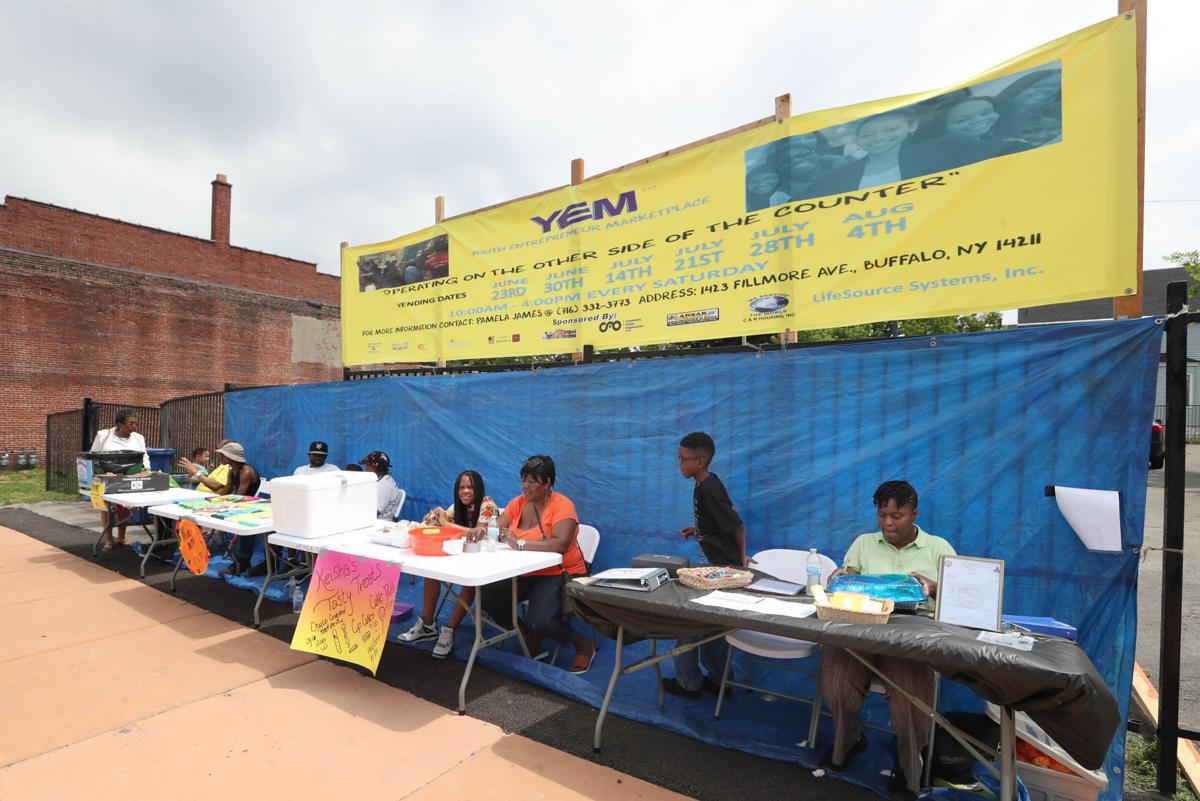 The Youth Entrepreneurship Marketplace teaches young people the basics of running a business and then gives them a chance to sell their creations each Saturday on Fillmore Avenue. (Sharon Cantillon/Buffalo News)

She also hands out frequent-customer cards.

She — with a little help from mom — is one of the vendors in the Youth Entrepreneurship Marketplace that sets up each Saturday on a Fillmore Avenue sidewalk near East Utica Street.

Olivia and other young people like her are one answer to a common lament in the black community: Outsiders come in and open businesses while longtime residents are merely consumers, handing over dollars that will never recirculate in the community or be used to hire their neighbors.

But despite the longstanding complaint, you can’t beat something with nothing.

Hence the effort to groom a class of future entrepreneurs by teaching young people the basics of running a business and instilling early on how integral entrepreneurship is to the well-being of the African-American community.

Some of the young vendors already had learned that at home. Olivia, for instance, had been running Libby’s Lemonade Stand for three years in front of her house and at events like the KidBiz program run by SUNY Buffalo State.

"I saw a lot of people doing lemonade and I thought it would be cool to start my own business," said the second-grader at Frederick Law Olmsted School No. 64. "My mom and I make it and we use organic lemons."

The kids went through weekly workshops on product cost, pricing, Health Department rules for selling food and other fundamentals taught by volunteers from the business community and government.

"The most important thing we learned was the mission statement, and to keep on selling so that you can get a bigger business," said 11-year-old Shermarion Thomas, a Frederick Law Olmsted School No. 156 fifth-grader who came up with the idea of selling bracelets, earrings and necklaces "because I wanted to give people style."

Charter School of Inquiry fourth-grader Nuri Muhammad, 9, learned "how to showcase your art," a lesson he put to good use in displaying the mugs, tote bags and other arts and crafts he designed

The youth marketplace will run each Saturday through Aug. 4, after which a new round of classes will be scheduled. While the classes gave kids a grounding, "the most important thing is getting out there and experiencing the transaction, selling your product," said Duane Madyun, chairman of the YEM program sponsored by the Community Action Organization of Western New York, the Martin Luther King Business District Association and several of other groups and businesses.

The kids pay $30 for the summer to vend,  which covers the cost of tables, banners and other overhead — just like in an adult business. The fee didn’t dissuade the young entrepreneurs, some of whom were repeat vendors. Instead, they factored it in as the cost of doing business.

"I knew I would make it back through all of the stuff I made, my treats," said Mikeisha Frazier, 16, a Nardin Academy junior selling chocolate-covered Oreos, pretzels and other goodies at Keisha’s Tasty Treats.

It will take that kind of spirit to close the economic gaps that still plague the African-American community.

According to the U.S. Census Bureau, the number of black-owned businesses grew 34.5 percent between 2007 and 2012, compared to just a 2 percent growth in the overall number of businesses. Still, black businesses account for only 9.4 percent of all firms, which is below blacks’ 13.1 percent of the population, and they accounted for only 1.3 percent of the sales from firms that were classifiable by race.

In other words, despite progress, blacks still have a long way to go to gain the entrepreneurial parity that is key to reviving black neighborhoods and creating safe, livable environments.

That revival is the ultimate goal of programs sponsored by the CAO and its partners, which want to see new businesses on thoroughfares like Fillmore, Jefferson Avenue and Genesee Street because that is the key to providing jobs, services and economic vitality. The aim is to "destroy the cycle of poverty," said Pamela James, CAO business development director.

The youth marketplace is a key part of that effort, and proof that on the East Side, "children are our future" can be more than just a trite slogan.

Mikeisha Frazier shows off the cake pops and other goodies she sells as part of the Youth Entrepreneurship Marketplace each Saturday on Fillmore Avenue. (Sharon Cantillon/Buffalo News)

MarQes Diallo, 9, does business with customer Patricia Dupree as part of the Youth Entrepreneurship Marketplace that sets up each Saturday on Fillmore Avenue. (Sharon Cantillon/Buffalo News)

The Youth Entrepreneurship Marketplace teaches young people the basics of running a business and then gives them a chance to sell their creations each Saturday on Fillmore Avenue. (Sharon Cantillon/Buffalo News)