Saints vs. Buccaneers: Follow the latest scores and highlights from the NFL playoffs

For decades, boaters in the Buffalo River have passed by the tan and gray concrete walls of century-old grain elevators that tower over the water.

Now an orange and white advertisement that stretches more than three stories tall is drawing sharp criticism that it and other advertisements are changing the character of the river's elevator alley.

"To start turning the Buffalo River into an alley of advertisements, I think, is a terrible decision," said South District Council Member Christopher Scanlon.

Scanlon, the city's Department of Permit and Inspection Services and local preservationists have all called for the sign to come down.

Earl Ketry didn't obtain a permit and used an unlicensed contractor to put a Vinyl Outlet sign over his Buffalo RiverWorks complex on July 24, said James Comerford, commissioner of permit and inspection services. The size and scale of the sign – which can be seen from the I-190 – are also in violation of the city's Green Code and require at least two variances from the Zoning Board for the sign to be approved, Comerford said.

The sign also appears to violate the stipulation that forbids the advertisement from being located within 500 feet of a body of water.

"They circumvented the process," Scanlon said. "You have a Zoning Board that doesn't meet for another month and the sign's going to sit there on the Buffalo River where I don't believe it belongs.

"I think it should come down right now until they go through the process," he said.

Requests for comment from Ketry resulted in a one-sentence statement from Bill Casale, general manager for Buffalo RiverWorks and other Ketry-owned properties: "We are working with the City of Buffalo to resolve their issues with respect to emergency repairs made at 323-339 Ganson Street."

Lou Petrucci, deputy commissioner for permit and inspection services, said the city is not requiring emergency repairs at that address. He would know, he said, because his department is the one that would require such an action.

RiverWorks applied for a permit only after erecting the sign, and received a notice of denial due to the square footage and wrapping the sign onto two sides. The company was also fined $500.

"If the Zoning Board votes against the sign, we told them it will have to be removed immediately," Comerford said.

Ketry tried once before to display a large sign on a grain elevator. In December 2016, his plan to install a 90-foot digital sign was unanimously rejected by the Zoning Board.

"The owners of the property knew they had to apply for a permit because they had done it in the past, and they chose instead to be in violation of the law," said Daniel Sack, vice president of the Campaign for Greater Buffalo History, Architecture and Culture.

"If the city wants to be serious about enforcing the law, they should levy the maximum fine permitted for every day that sign is in place," he said.

Scanlon is also bothered by what he described as Ketry's intentional skirting of the law.

"The fact that they have been through the process, know it well and installed the sign anyway is extremely frustrating," Scanlon said.

He also said Ketry was thumbing his nose at the Green Code.

"We went through countless public meetings in a seven-year process to put in place a brand new zoning code, and they decided to ignore it altogether and install the sign," Scanlon said.

Comerford said a building inspector was told when he showed up on-site that the sign was not actually a sign, but a mesh-like material designed to catch bits of falling masonry from the grain elevator.

The commissioner found that explanation unbelievable.

"I don't know how anything vertical would catch anything," Comerford said. "If they are claiming there are pieces falling from the structure somehow and this would catch it, it's ridiculous."

Buffalo RiverWorks has gone from opening with two ice rinks in 2014 into an entertainment complex whose offerings include dining, bars, a brewery, hockey, curling, concerts and banquets. An outdoor seating area among the ruins of a former grain elevator include the recent kitschy items a double-decker bus and kiddie amusement ride.

But Lorraine Pierro, president of the Industrial Heritage Committee, which preserves and celebrates the history of Buffalo's waterfront, is among those who think the latest advertisement goes too far.

"The only good feature is that it's removable," Pierro said. "If they want to use the elevator for publicity, at least make it related."

RiverWorks also displays a six-pack of Labatt Blue painted on silos, done prior to enactment of the Green Code. A mural promoting Buffalo Niagara Waterkeeper is on the base of the same grain elevator that contains the Vinyl Outlet ad.

"The Labatt's advertisement was more of a novelty," Scanlon said.

"With all of the activity taking place on the Buffalo River and the attraction it has become, I do not think locations along the river are a place for that type of advertisement," Scanlon said.

RiverWorks partners Earl Ketry and Doug Swift plan to redesign and resubmit a proposal for a giant digital display sign on the side of their riverfront entertainment complex after the initial concept was rejected by the city Zoning Board of Appeals. Ketry and Swift last month sought a variance to allow a 90-foot by 80-foot digital sign on the

For more than two decades, Earl Ketry has been defying the odds, and even his own advice, in his personal bid to restore some of his city’s

Editorial: RiverWorks is a shimmering example of how renewal breeds more renewal

Who would have ever thought that the rundown area along the Buffalo River that included an old grain elevator at 333 Ganson St. would evolve into one of the City of Buffalo’s coolest places? A recent Buffalo News story by reporter Jonathan Epstein described how Earl Ketry and developer Doug Swift, with the help of other investors, built something 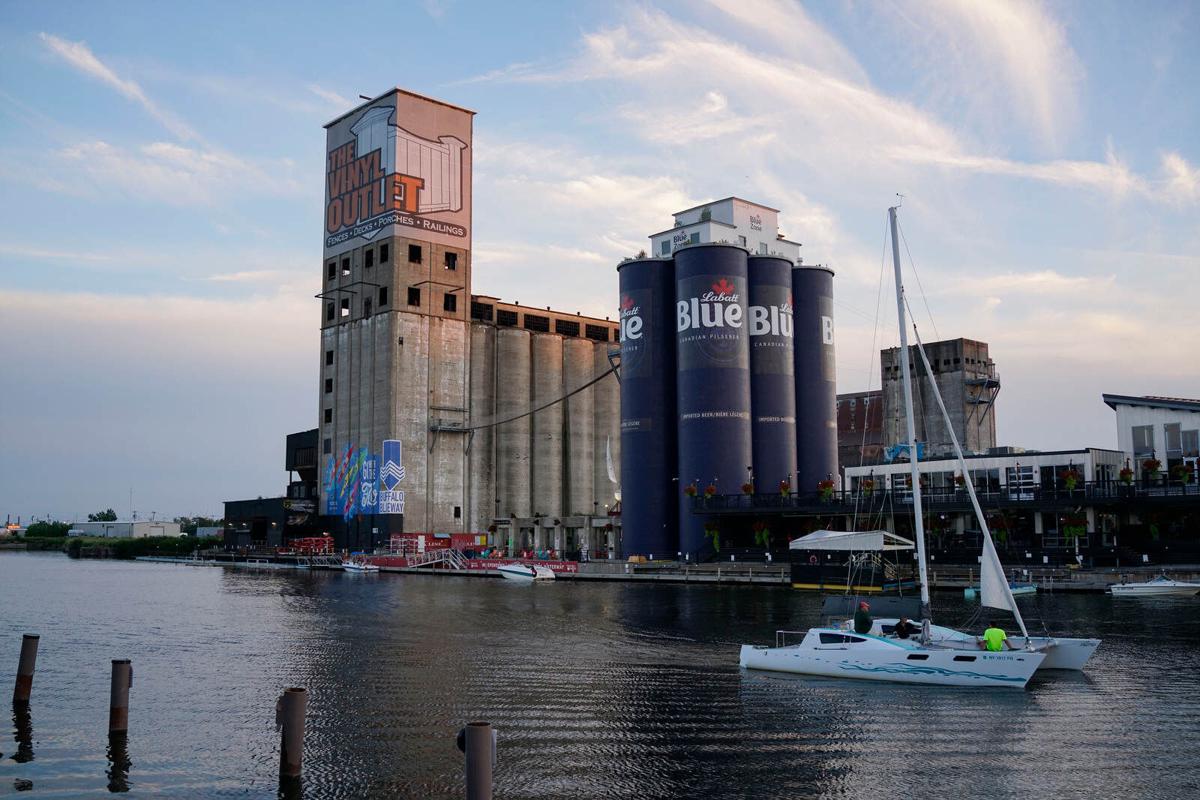 A new advertisement for Vinyl Outlet atop the old GLF Grain Elevator at Buffalo RiverWorks next to the Labatt Blue six-pack, pictured on Thursday, July 30, 2020. 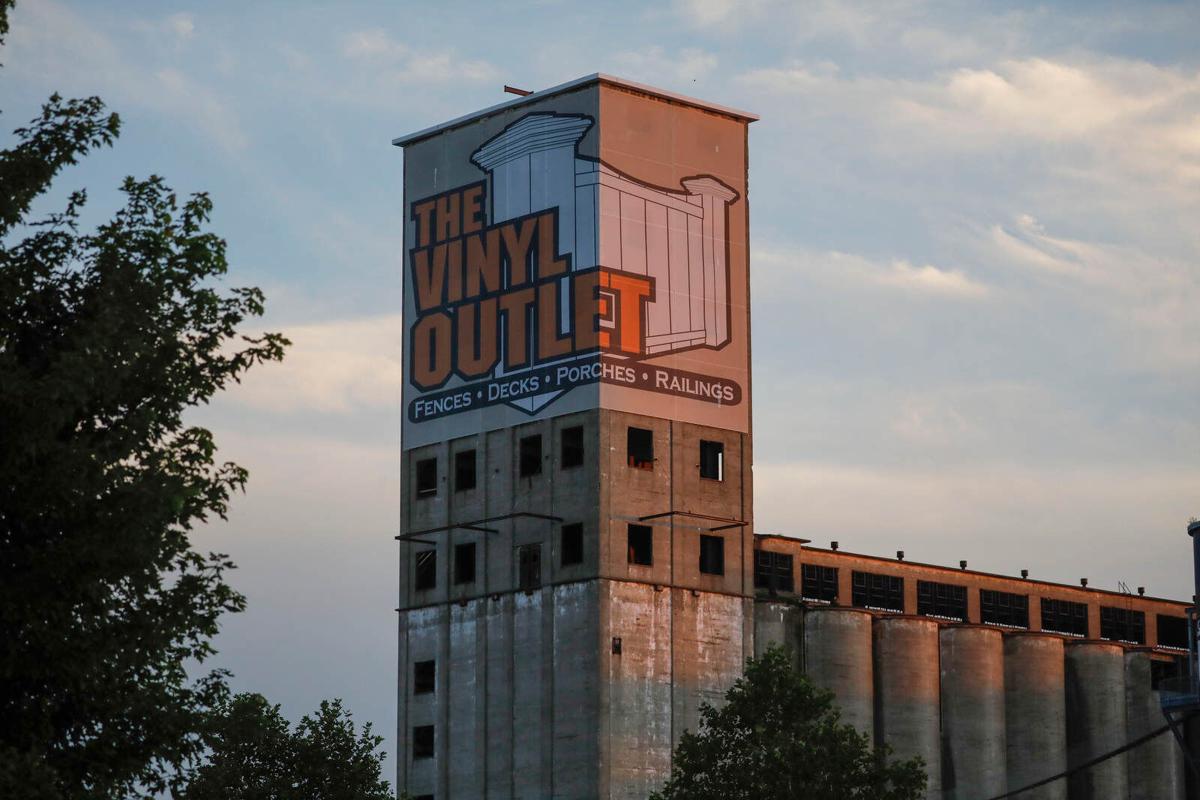 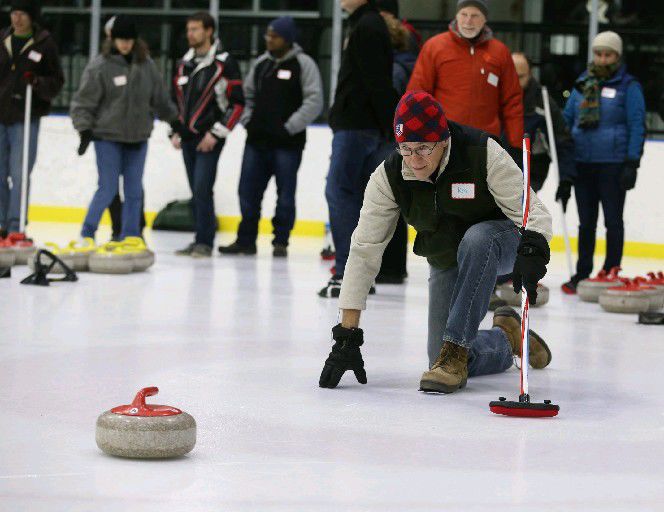 RiverWorks offers curling lessons, ice skating and more on two sheets of ice under cover along the Buffalo River.