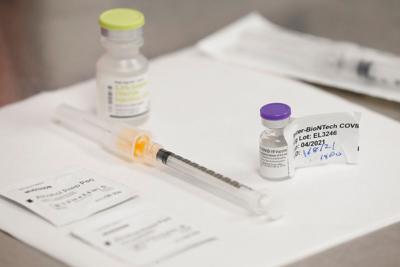 Public health pleas alone may no longer win over those who are still vaccine reluctant. But faced with the threat of being locked out of college, a Buffalo Bills game or a job, more local residents are rolling up their sleeves.

Erie and Niagara County vaccination data provided by the state to The Buffalo News shows increases in first-dose Covid-19 shots after new vaccination mandates have been announced or taken effect.

For most of July, the earliest data provided by the state Department of Health, the number of Erie and Niagara residents receiving first vaccine doses generally hovered between 5,000 and 6,000 a week. By late July, confirmed Covid-19 cases due to the Delta variant began a new upward climb. That corresponds to a small increase in new vaccinations, which began to routinely exceed 6,000 first-dose shots a week.

But it wasn't until late August, as colleges and universities were reopening for the fall semester, that the number of new vaccinations started to swell, reaching more than 8,000 new vaccinations a week. Many public and private colleges, especially in New York, have required all students on campus to be vaccinated. On Aug. 23, the U.S. Food and Drug Administration also gave the Pfizer vaccine full approval, upgrading the vaccine from its emergency authorization status.

New first doses tail off again through the Labor Day weekend. But they show a second smaller spike after President Biden announced his workplace vaccination mandate on Sept. 9. The president's new policy requires that any employer with more than 100 employees had to have their workers either vaccinated or tested weekly for Covid-19.

In the week following his announcement, new vaccinations among Erie and Niagara residents grew 20%.

On Sept. 14, Erie County and Pegula Sports and Entertainment jointly announced that proof of vaccination would be required for future Bills and Sabres games, as well as other events held at KeyBank Center and Highmark Stadium. Two days later, Shea's Performing Arts Center announced a vaccination requirement for its theatergoers.

And starting Monday, all health care workers were required to be vaccinated unless they had a religious or medical exemption. Hospitals ran vaccination clinics through the weekend to get shots to as many unvaccinated workers as possible over the deadline.

Throughout these past few weeks, new vaccinations among local residents have continued to rise, according to data provided through Sunday. This past week, 8,549 people in Erie and Niagara counties received first-dose vaccinations, an increase of 25% over the week before. That figure also represents the highest weekly total for new vaccinations in months.

"This is great data," he said. "I personally was feeling really discouraged that we weren’t making any headway. At least we were able to increase the rate of vaccination, and it’s stayed up. We need to do better, but at least people are listening, and it gives me heart."

By first placing unvaccinated workers on leave, Catholic Health and other local health systems are buying more time for those workers to get shots.

The vaccine mandates are not without personal, professional and social consequences. Some residents have chosen to leave their jobs, retire, or give up season tickets in the face of vaccination requirements. Administrators at local hospitals, nursing homes and other health care facilities are bracing for hundreds of their own employees to stop coming for work due to the mandates.

Though some are choosing to get vaccinated after holding out for so long due to the new policies, many also feel bullied and consider the vaccine requirement an infringement of their personal rights.

Winkelstein noted as have many others that vaccine mandates aren't a new concept. Children are required to get them before enrolling in school. The Covid-19 vaccine is just the newest one.

"Individual liberties are not absolute," he said. "You always have to be balanced against the potential harm and effect your actions have on other people. Putting limitations on unvaccinated people seems well within the structure of civil rights that we have had for a very long time."

A jab or a job? For these health care workers, the answer is life-changing

Whether it's for religious reasons, fears about long-term effects or because they believe it infringes on their freedom, some health care workers have decided to leave their careers rather than get a shot.

About 1,000, or less than 2%, of the 51,000 students attending public colleges and universities in WNY have yet to submit proof that they are fully vaccinated, and most of them are enrolled at ECC.

The Health Department received reports of 1,818 new cases of Covid-19 among Erie County residents, 32 fewer than the 1,850 cases reported for the week ending Oct. 9.

Staffing shortages at nursing homes may worsen with vaccine mandate

“There’s not going to be a change in my position," she said of the vaccine mandate for state health care workers.