Some believe the noise may be from a resident who is protesting development, possibly the Heron Pointe apartment complex pictured here. The project is in the area where the booms are most commonly heard. (John Hickey/Buffalo News) 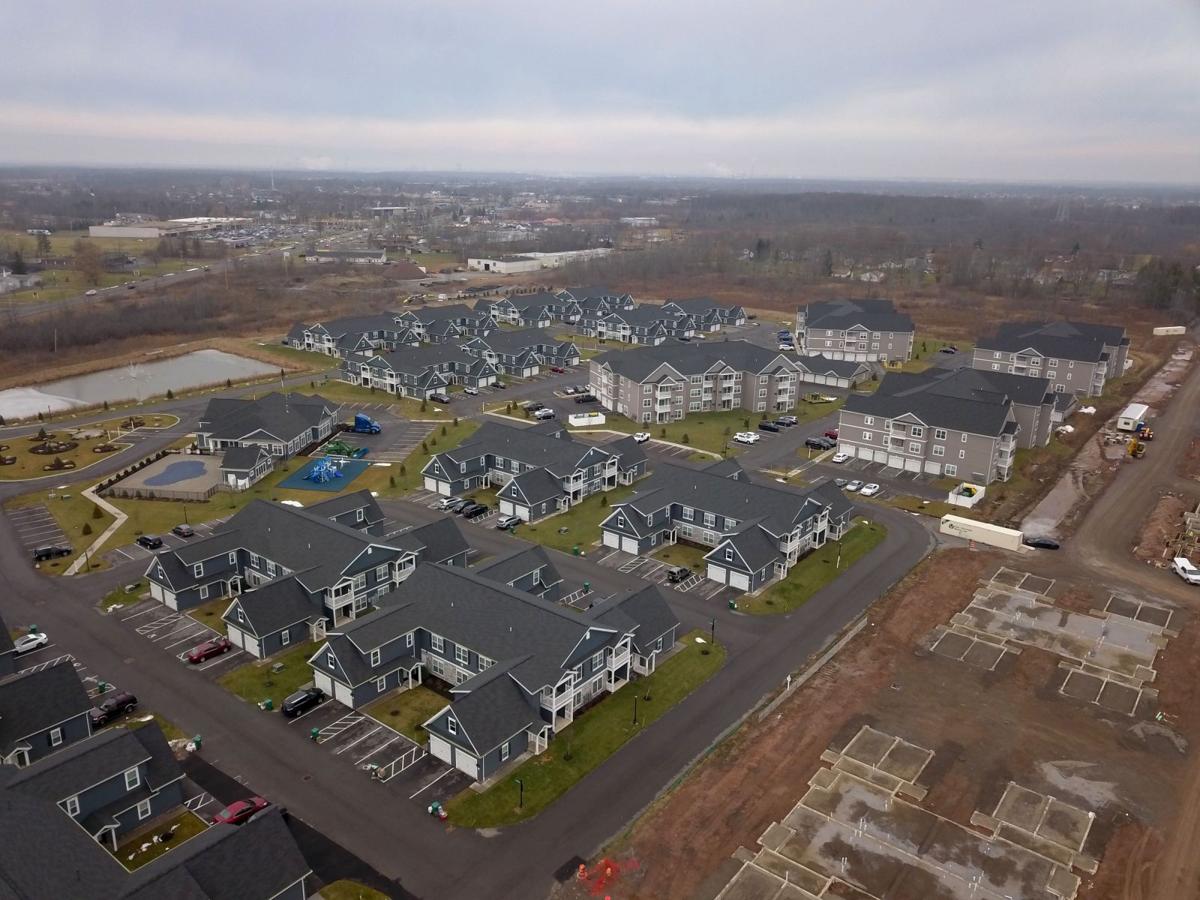 Grand Island residents aren't sure where sporadic booming noises are coming from, but some believe it may be from a resident who is protesting development, possibly the Heron Pointe apartment complex pictured here. The project is in the area where the booms are most commonly heard. (John Hickey/Buffalo News)

Someone – or something – is producing loud, booming noises that people across Grand Island say they can hear and feel.

Town police and the Erie County Sheriff's Office have looked into the noises, but so far they have not revealed what's going on. One official pointed confidently to explosives of some type set off by an opponent of further development on the island.

But without an explanation from police, Grand Island residents have been left to speculate about the cause of the booming sounds.

Some members of the public suggest exploding transformers. Or animal control cannons. Or military aircraft. Or even blasting tunnels under the island.

Sheriff's spokesman Scott Zylka would not answer specific questions about the booms.

"We have received complaints about the noises, and this office is investigating the origin," Zylka said in an email.

Robert Rine, officer in charge of the town's part-time police department, said he asked the Sheriff's Office to send up one of its helicopters to scan for a blast area or other sign of explosives.

"We think we have it narrowed down to an area," said Rine, who's never personally heard the boom.

He said the blasting sounds may not amount to a crime, noting that no one's reported property damage. The town's noise ordinance or a crime of disorderly conduct would be difficult to apply, Rine said.

"If it's sporadic, if there's no pattern," he said, it's harder to trace.

Someone familiar with the sheriff's investigation, who spoke on condition of anonymity, said detectives have determined the source of the noises.

It's a resident who is protesting development — either construction of a 20,000-panel solar array or the Heron Pointe apartment complex, the person said. Both projects are in the area where the booms are most commonly heard.

"It took away this guy's backyard," the source said. "He's letting off fireworks to disturb the residents."

Heron Pointe developer Anthony Cutaia did not respond to a message seeking comment.

The person familiar with the investigation said the Sheriff's Office hasn't made an arrest yet because detectives contend they don't have enough evidence that a crime was committed or tying someone to that offense.

Councilwoman Jennifer Baney said she heard a boom during the Dec. 16 Town Board meeting.

"I'm not overly concerned," said Baney, who doesn't know what is causing the sound but is confident police are handling the matter properly.

"I have discussed it with the sheriff's investigator, and I've reported it to all levels of law enforcement. And I hope the people responsible will be held accountable."

While someone reported hearing a booming sound last year and again in April, according to posts on the "Grand Ideas for Grand Island" Facebook group, the most consistent reports of explosive sounds on the island came on about four occasions in November and earlier this month.

"It sounded to me like a sonic boom, like the planes used to create," said Reg M. Schopp, designer and goldsmith with deSignet International on Whitehaven Road. "It has an industrial kind of sound to it."

Residents have reported hearing them from various points and at various times of the day on the island, though they mostly originate from the south or southwestern portion of the island.

Islanders have come up with theories to explain the booming sounds.

They know it's not fireworks from Niagara Falls — New York or Ontario — because those go off at set times through the year and can be seen in the sky, too.

Other fireworks function more as surface-level noisemakers and could be the source of the noise.

Some suggested propane-fueled animal control cannons, which are widely available and are used to scare birds away from crops. And more than one person mentioned aircraft from the Niagara Falls Air Reserve Station as a possible source of the noise.

Some believe the noise may be from a resident who is protesting development, possibly the Heron Pointe apartment complex pictured here. The project is in the area where the booms are most commonly heard. (John Hickey/Buffalo News)

Grand Island residents aren't sure where sporadic booming noises are coming from, but some believe it may be from a resident who is protesting development, possibly the Heron Pointe apartment complex pictured here. The project is in the area where the booms are most commonly heard. (John Hickey/Buffalo News)