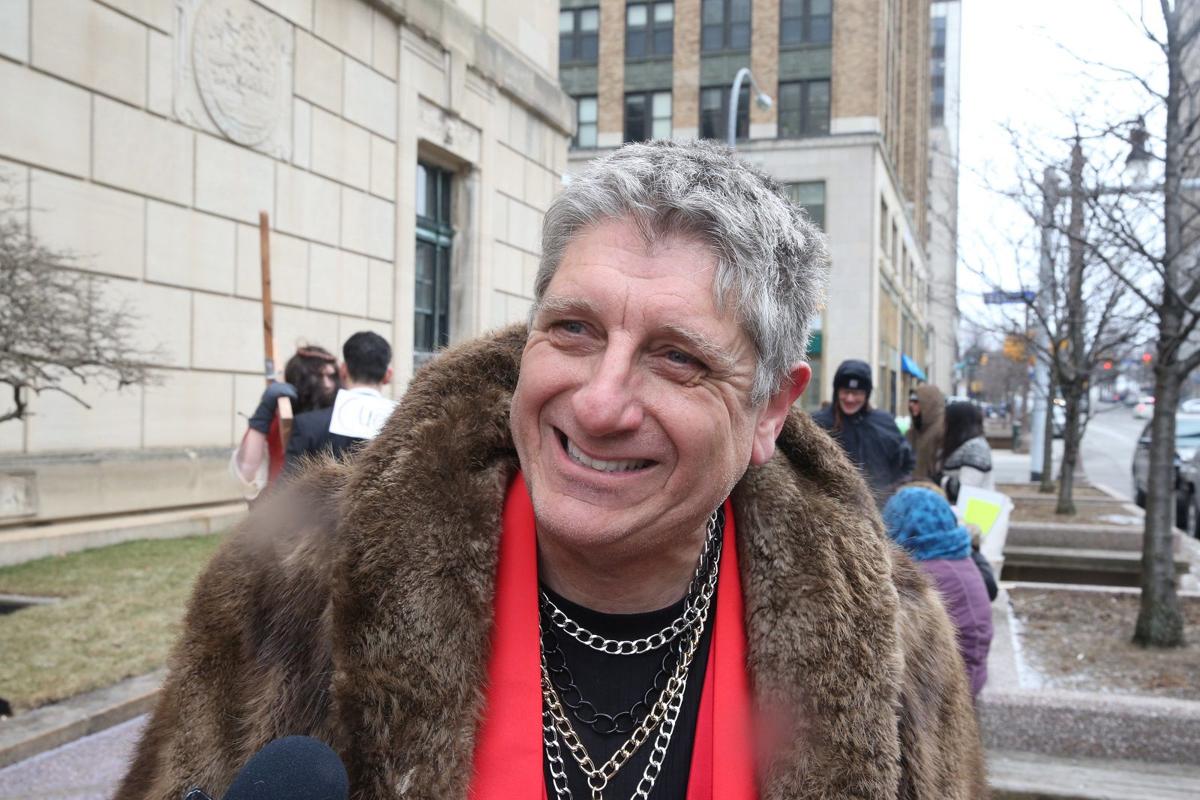 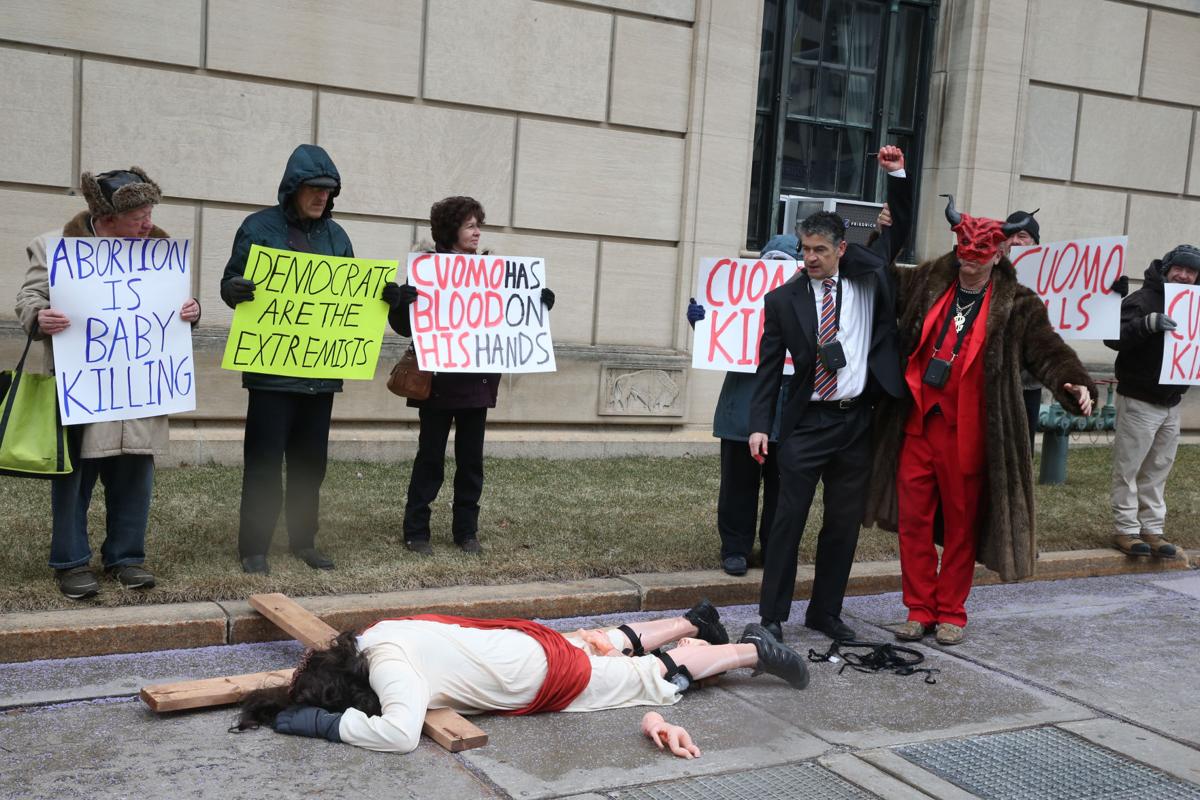 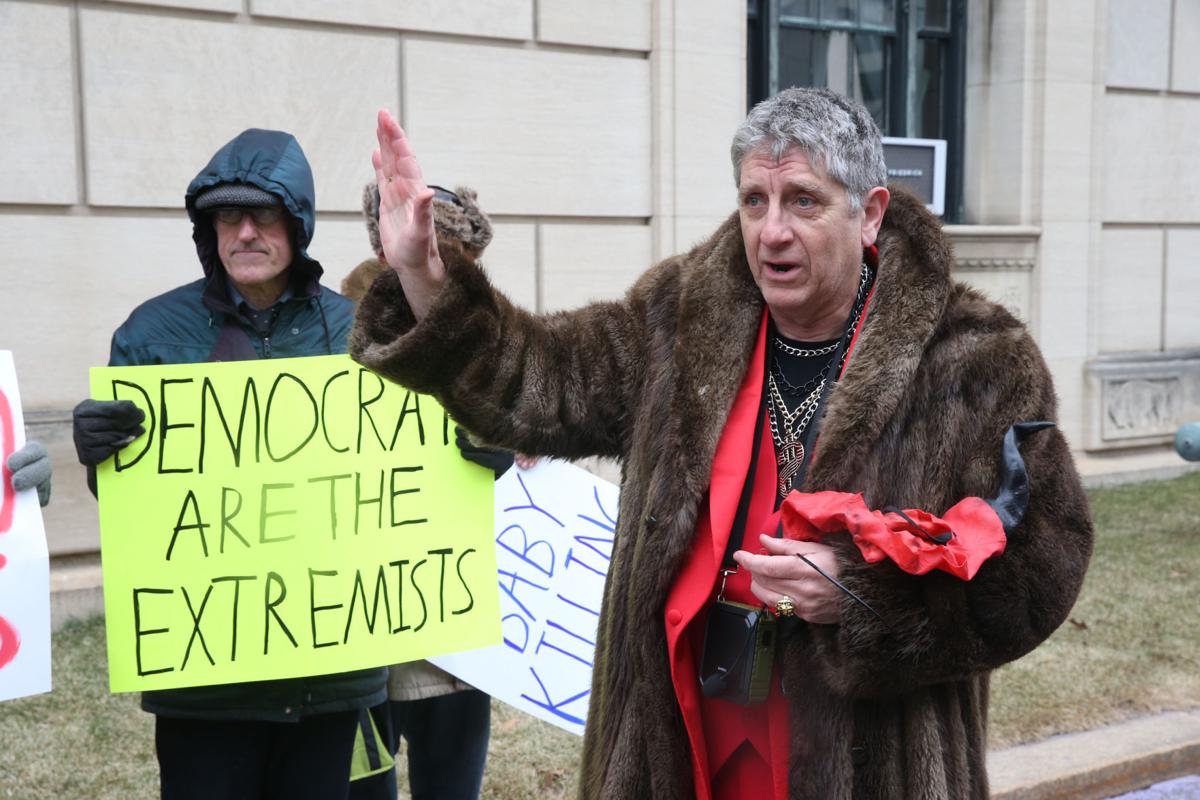 Randall Terry, in costume as "Satan" for a demonstration skit, talks with supporters in front of the Mahoney State Office Building on Court Street. (John Hickey/Buffalo News)

Randall Terry was back in Buffalo on Monday morning in a role he hasn't been in for much of the last decade: activist.

Terry, an outspoken opponent of abortion who founded Operation Rescue and brought hundreds of people to Buffalo in 1992 during the "Spring of Life" protests, embarked on a 20-city tour throughout the state of New York this week.

New York's role in the abortion debate has been highlighted since the state Legislature, newly under Democratic control, passed the long-stalled Reproductive Health Act last month. The law authorized the most sweeping set of protections to the state’s abortion laws in 49 years, and drew criticism from President Trump during his State of the Union address last week.

Terry will lead demonstrations targeting Gov. Andrew M. Cuomo. A skit titled "Christ, Cuomo and Satan" will be performed in front of state office buildings, as it was Monday on the sidewalk in front of the Walter J. Mahoney State Office Building on Court Street.

"I want people to think of Andrew Cuomo as a god-hating, left-wing baby-killer," Terry said Monday morning when asked what he wanted his tour to accomplish. "That’s what I want. When they see Andrew Cuomo, I want them to think, ‘This is an evil man.’ Because he is evil."

Told of Terry's appearance Monday, Richard Azzopardi, a senior adviser to Cuomo, responded: "There is theater and there is fact, and the fact here is that New York codified the current law of the land into state law."

Terry's tour was scheduled to hit Batavia and Rochester on Monday and will wind its way throughout upstate before reaching New York City on Friday.

"There are several elements here," Terry said. "One is that Cuomo is trying to set a pace for pro-abortion states. ... Mark my words, Gov. Cuomo is running for president. That’s what this is about. ... He’ll let Elizabeth Warren and all these other people burn themselves out, and then he’s going to step forward, and he’s going to have his picture on the front page of Time Magazine and front page of Newsweek."

Terry said he has not been in his activist role for several years due to his son, Michael, having been diagnosed with cancer at age 10. Terry and his family moved from Rochester to Memphis so Michael could be treated at St. Jude Children's Research Hospital, and Terry said Monday that Michael was in remission.

Terry could not remember the last time he was in Buffalo, saying it must be "seven or eight years."

In 1992, hundreds of pro-life protesters descended upon Buffalo in a massive protest dubbed "The Spring of Life." Among the 628 people arrested was Terry's father, Michael W. Terry.

Aside from the three main actors, about 20 other people were on hand, either playing protesters or filming the skit. The demonstration drew some curious bystanders who took out their smartphones to record it, attracted a few honks of horns and one notable voice of opposition when a young man walked by yelling, “It’s only in the case of medical emergency! Read the law!”

Randall Terry, in costume as "Satan" for a demonstration skit, talks with supporters in front of the Mahoney State Office Building on Court Street. (John Hickey/Buffalo News)