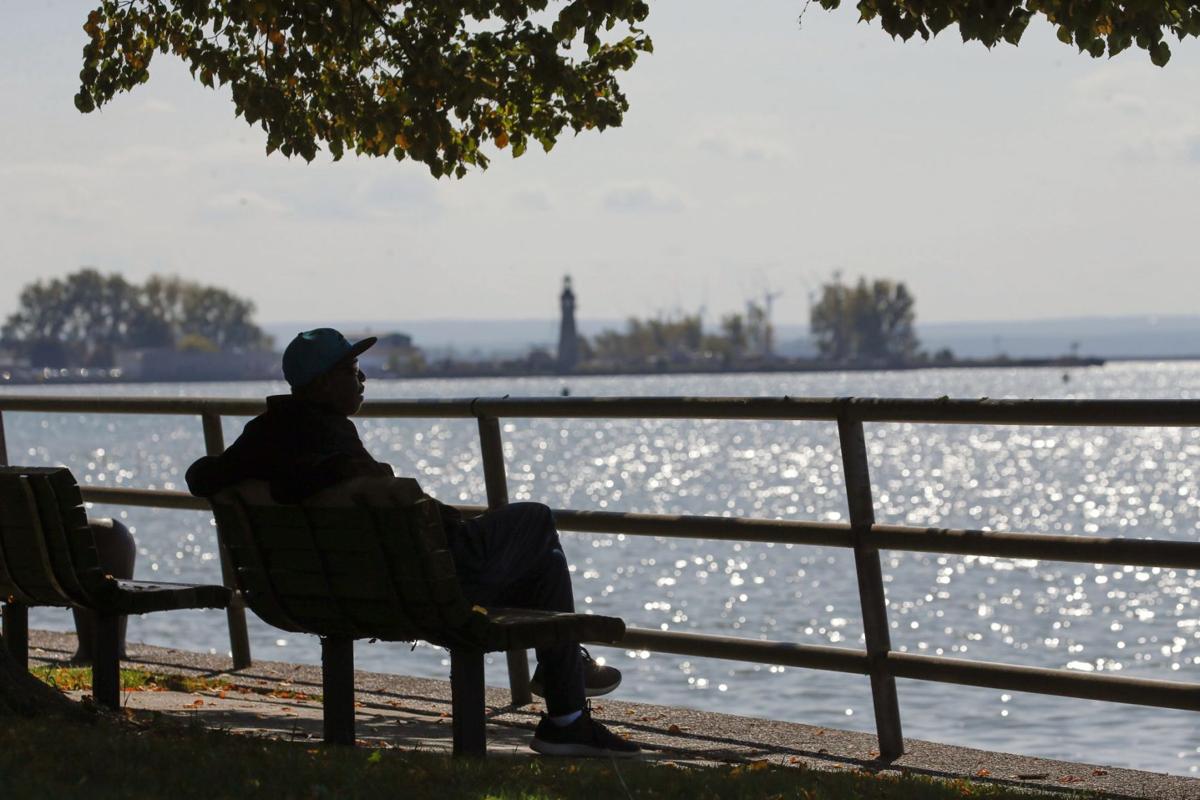 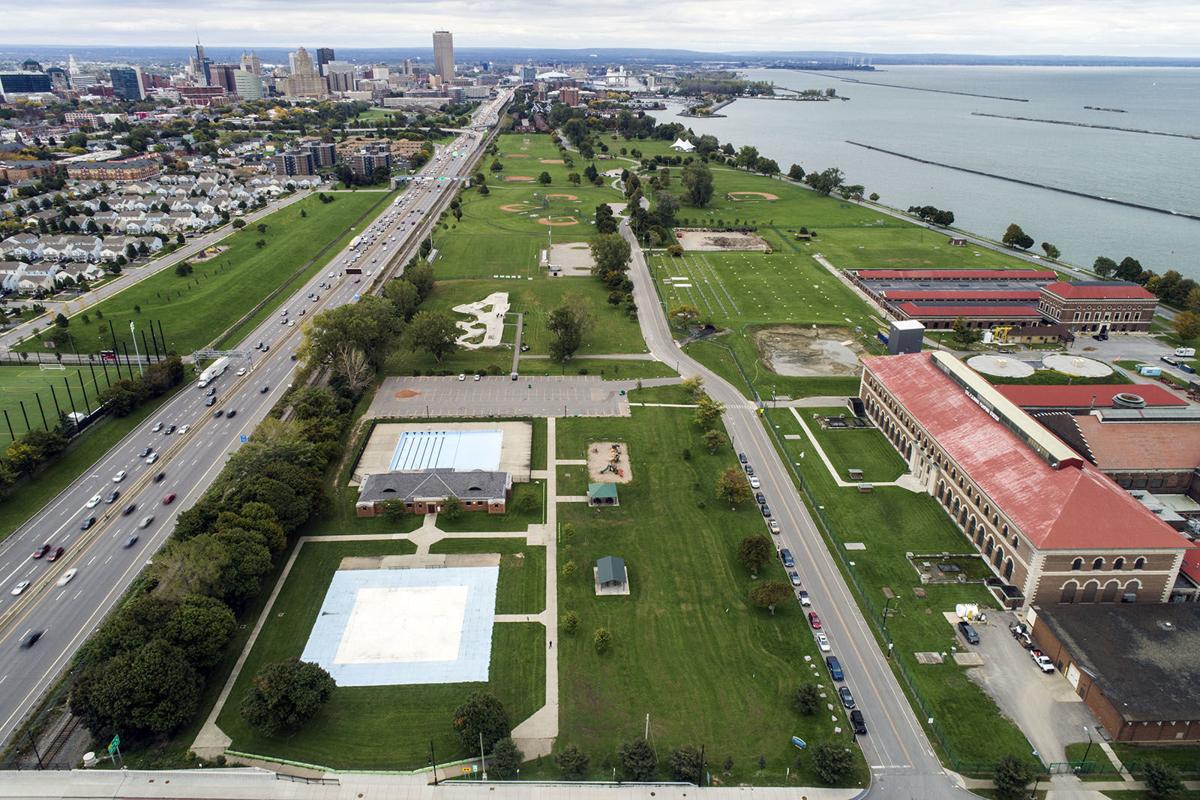 A view of LaSalle Park. At right is the Col. Francis G. Ward Pumping Station, which treats and pumps fresh water throughout the city. (Derek Gee/ News file photo)

The Ralph C. Wilson Jr. Foundation on Wednesday afternoon will announce the largest philanthropic gift ever made in Western New York.

The foundation will give $100 million to turn LaSalle Park on Buffalo's Lower West Side into a signature park and to develop a completed regional trail system.

The timing is no accident: The $100 million announcement comes on what would have been Ralph C. Wilson Jr.'s 100th birthday.

Detroit will hear the same news. The Wilson Foundation will announce in Detroit that it will give another $100 million to remake a riverfront park and connect trails in Southeast Michigan.

The gifts celebrate Wilson's legacy in the communities that mattered most to him.

"We are proud and honored to celebrate Ralph's birthday today with a lasting gift that matches in scale the passion and pride he had for his hometown of Detroit and 'adopted' hometown of Buffalo, where he founded and owned the Buffalo Bills," said Mary Wilson, Ralph Wilson's widow and a lifetime trustee of the foundation.

"Ralph was committed to exercise, staying active and enjoying life," she said. "It would make Ralph so happy to see people of all ages enjoying these enhanced parks and trails for years to come."

The foundation considers boosting parks and trails one of its top priorities.

[From Centennial to Lasalle: How Buffalo's waterfront park has evolved]

"If you look at both regions and their great progress, it's been very impressive," said David O. Egner, the foundation's CEO. "But the one thing parks and trails do that economic development alone can't is connect people.

"It's our hope that by investing in trails and creating a signature park, we can truly make this accessible for every ZIP code, regardless of socioeconomic conditions and race."

Giving both regions $100 million was proposed by Mary Wilson, Ralph's widow and one of four life trustees he hand-picked to oversee the foundation.

"Mary Wilson said it needs to be $100 million in both regions," Egner said. "She thought both were important to Mr. Wilson, and on his birthday we should make a statement of this size and caliber."

As part of the agreement, both parks – with the expectation of city government approval – are expected to be renamed Ralph C. Wilson Centennial Park.

Mayor Byron W. Brown said the donation "will enhance the quality of life for generations of Buffalo residents."

The grant, according to several veterans of Western New York's philanthropy community, tops the list of the most money ever given at one time.

In 2016, billionaire bond trader and Amherst native Jeffrey Gundlach committed $42.5 million to the Albright-Knox Art Gallery for its planned expansion project, and he added $10 million the following year.

In 2015, Delaware North Chairman Jeremy M. Jacobs gave $30 million to the University at Buffalo School of Medicine and Biomedical Sciences, bringing his total contributions to the institution to over $50 million.

Going back to the early 20th century, John J. Albright gave $1 million to build the art museum that bears his name, about $30 million in today's dollars.

Egner said the grant needs to be seen in context of what has come before.

"The city has been working on LaSalle Park for decades," Egner said. "The state and local municipalities concerned about greenways have been funding the state trailway systems and advocating for more funding for decades as well."

"So we feel that while this is a large gift, it's made possible because of all of the work that happened before us," he said. "In many respects, we're just amplifying that work."

Wilson, who died in March 2014, made it known that proceeds from the Bills sale and a portion of his estate would be used to create the philanthropic foundation.

The foundation expects to spend between $1.4 billion and $2 billion on both regions over a 20-year period that ends January 2035.

Outside support for park is expected

The Wilson Foundation grants are not intended to pay for everything. Seventy percent of the remaining costs for the trails initiatives in Buffalo and Detroit are expected to come from states, municipalities, organizations, businesses and other philanthropies.

The foundation expects additional outside support for the parks as well, though it's not yet known how much will be needed.

Getting others to contribute and participate in the initiatives has been a cornerstone of the sustainable model the foundation has pursued in its three years and 10 months of existence.

Last month, the foundation gave $6.5 million to complete a trail network from downtown Buffalo to Youngstown, helping fill gaps along the Niagara River Greenway. That includes the longest segment of the project, a 7.4-mile trail from North Tonawanda to Niagara Falls through the Town of Wheatfield.

The state's $23 million contribution represents the kind of partnership the Wilson Foundation anticipates in the future.

"The pot of dollars we're committing will hopefully be a catalyst to fill those key gaps along the region," said J.J. Tighe, who directs the foundation's parks and trails initiative.

"Our $200 million between the two regions will produce a direct economic impact of about $500 million," Egner said.

The decision to turn LaSalle Park, the city's largest waterfront park, into a signature park came during a community-involved process called "Imagine LaSalle."

Over the summer, a focus group of 22 people from surrounding neighborhoods selected by the mayor's administration visited several parks, including Brooklyn Bridge Park in New York City, Maggie Daley Park in Chicago and Washington Park in Cincinnati to draw inspiration.

Nearly 1,200 people filled out surveys offered in seven languages, and youth from the Belle Center were enlisted to take pictures and write about their thoughts on the park. The University at Buffalo's Regional Institute and local organizations and agencies also were involved.

"The overall goal is to move forward with a broad conceptual design for the park and work collaboratively with public and private partners to realize that design,"  Tighe said.

After a design process lasting 12 to 18 months, construction at LaSalle Park could begin as early as 2020, Egner said.

"We should have a completed park in the next three to four years," Egner said.

That would complete a dramatic transformation of land that was a dumping ground through the 1920s.

Centennial Park, as the park was first called, opened in 1932 after the city leveled, seeded and landscaped the site. The park was renamed for René-Robert Cavelier Sieur de La Salle, the first European explorer to visit what later became the City of Buffalo.

The city has made significant improvements to the park over the past 20 years, and the enhancements will build upon a master plan adopted in 1998 and updated in 2017.

The park is near five distinct West Side neighborhoods: Front Park, Fargo Estates, Lakeview, Waterfront and Columbus. A 2016 American Community Survey found 15,279 people lived there in 2016, according to census estimates.

The foundation expects the park to become a strong regional attraction.

The foundation sees recreation through trail and greenway projects as a way to democratize public space and bring people together.

Tighe, who directs the foundation's parks and trails initiative, formerly led the Michigan Fitness Foundation and the Governor's Council on Physical Fitness, Health and Sports, where he helped develop the Iron Belle Trail Initiative that now stretches 2,000 miles across Michigan.

The foundation envisions developing 250 miles of trails in Western New York and Southeast Michigan over the next five to seven years.

"That is enough trails to ride my bike between Detroit and Buffalo," Egner said, referring to the distance between the two cities when driving through Canada.

With the groundbreaking for a transformed Ralph C. Wilson Jr. Centennial Park one year away, the question of who will operate and maintain the park has become clear.

A million dollars from the trusts of two of Ralph C. Wilson Jr.'s daughters, both deceased, will go toward the Barkyard, Buffalo's first dog park, and a planned entry garden in the park named in his honor.

A view of LaSalle Park. At right is the Col. Francis G. Ward Pumping Station, which treats and pumps fresh water throughout the city. (Derek Gee/ News file photo)