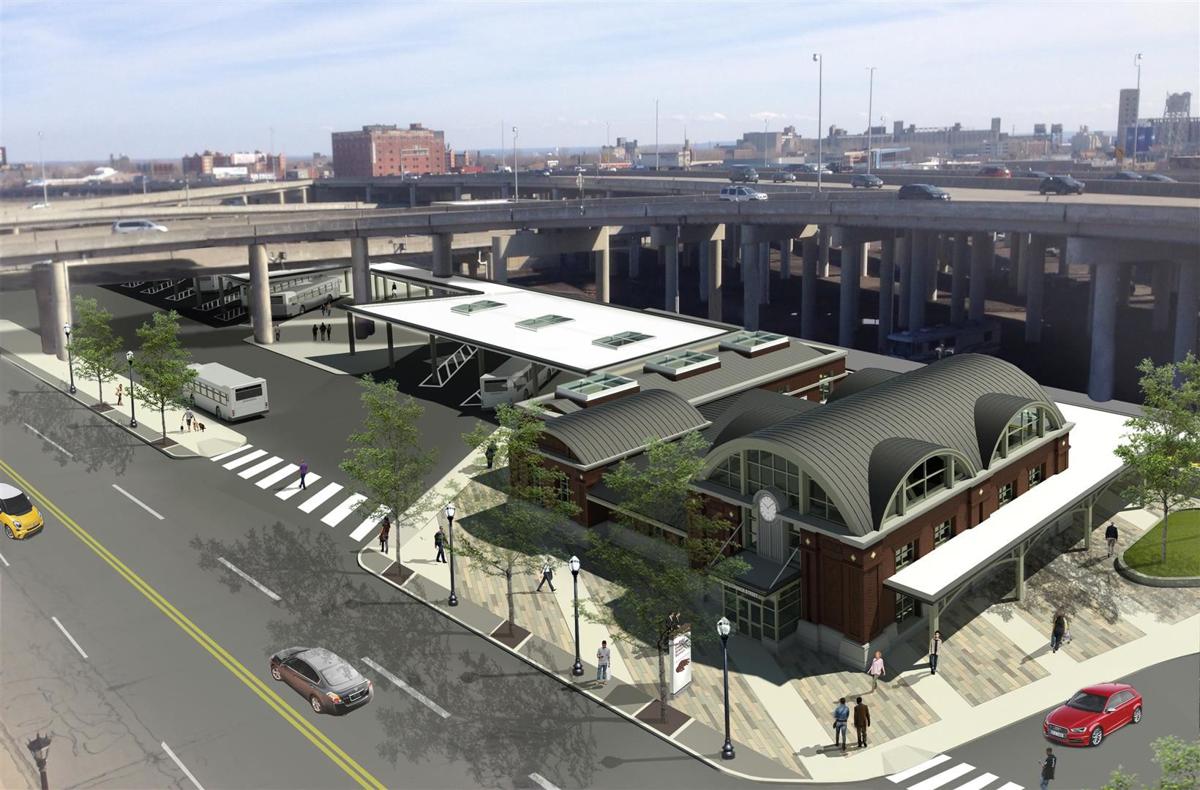 A rendering of the proposed new downtown Buffalo train station at 75 Exchange St. 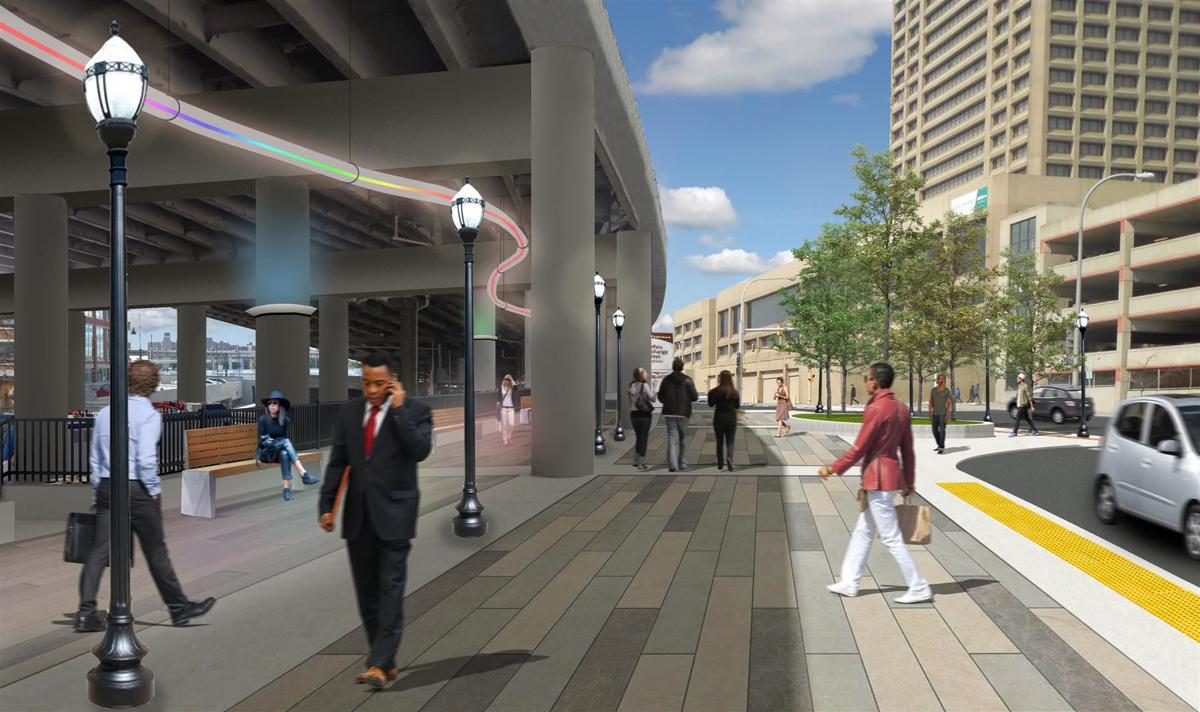 Looking away from the train station. 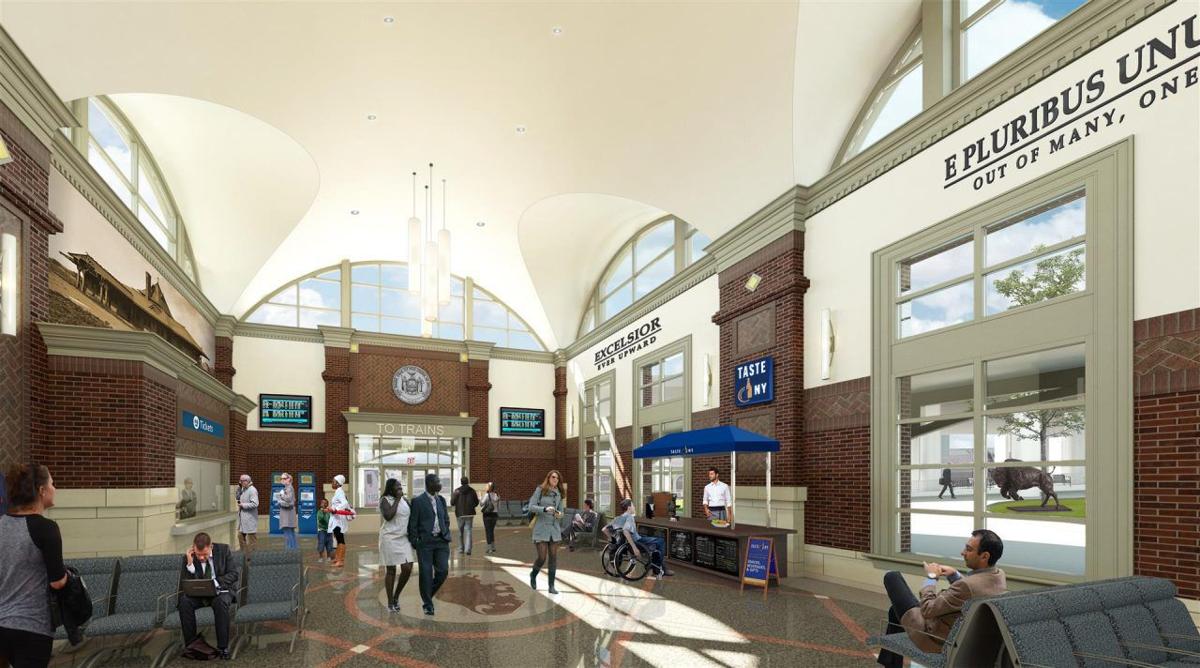 A rendering of the proposed station coming to Exchange Street in late-2020.

The proposed $20 million downtown train station would combine a classic and contemporary look, and would be nearly three times the size and in the same location as the current Exchange Street station.

The three-story station will be at ground level after the land is built up six to nine feet in places – and moved closer to the street.

That's according to renderings shown Monday by state Department of Transportation officials at a public information meeting inside the Buffalo Transportation Pierce Arrow Museum.

The unveiling came nearly a year to the day since a committee convened by Mayor Byron W. Brown chose to put a new station downtown instead of at the Central Terminal.

The train station is slated to be completed in summer 2020.

The brick train station includes a barrel-vaulted ceiling with intersecting barrel vaults that bathe the station in light, according to the renderings. The layout calls for a waiting room, Amtrak administrative office, bathrooms and a space for mechanicals.

The design also pays a small homage to the Central Terminal, with references to that station's art deco style, its exterior clocks and terrazzo floor.

The ADA-accessible station, at 4,800 square feet – compared to the current 1,700 square feet – would have a waiting room that can seat 40, double what's available now. Luggage would be checked.

A lit, covered pedestrian walkway is planned under the I-90 interstate to connect the train station to Metro Rail on Main Street.

The site will also be accessible for bikes, taxis and city buses.

"There are approximately 38,000 riders annually at the Exchange Street station right now, and they deserve better accommodations that what they have now," said Susan Surdej, an engineer and Department of Transportation Regional 5 spokeswoman.

The estimated cost is $20 million for construction and track upgrades. An additional $4 million is anticipated for engineering costs, with $1 million for the study that helped determine the siting of the station.

While renderings can be significantly different than the final result, Surdej said she didn't think that would happen.

"We will get some version close to this," Surdej said.

There are contingencies to add a waiting room on the east side of the building, if intercity buses are added. There are 14 canopied parking spaces for Greyhound and Trailways buses, and room for additional street parking above the 26 spaces planned.

Surdej said there are expectations that an intermodal expansion will eventually happen.

The reception was overwhelmingly positive from the people in attendance.

"I like what I'm seeing," said Joe Vertalino of Hamburg. "It's very aesthetically pleasing compared to what they have here now."

But Vertalino was concerned the station may not be big enough to handle future traffic if rail becomes more popular.

"There's not a lot of room for expansion," he said.

Nick Osinski of Buffalo said he can't wait for the new station to open. "It's a pretty building, and it seems like it will fit in well downtown," he said.

"This is long overdue," said Mike Schultz of Kenmore, who takes the train to New York City for work every couple of weeks."I generally like the look of it. I see some echoes of the Central Terminal, and moving things closer to the street is always good urban planning."

Paul Parker of Buffalo said he was most concerned about safety, having twice been dropped off at the station on off-hours when the doors were locked.

"We don't need a big station but we need something that's functional and is safe for the older people," he said.

Guy Christopher, a retired rail worker living in Ransomville, said it was a "nice station," but in the wrong place.

"I'm a Central Terminal fan, and I think train service should be out there where the rail traffic is," he said.

The new station will be good for tourism between Buffalo and Niagara Falls, said Patrick Whalen, director of the Niagara Global Tourism Institute.

"I think this is a big upgrade," said Whalen, a frequent Amtrak passenger. "The current train station is just embarrassing. What I've seen looks like the right scale and the right size.

"I love this covered link to the light rail."

Tim Tielman, who offered an alternative plan last year rejected by the mayor's committee, thought the station should have been sited on Washington Street.

"By lacking a direct visual link to Metro Rail and the Canal District, it is foregoing a tremendous opportunity," Tielman said.

He also wondered why there wasn't a presentation offered, or a place to write comments.

"Without any other information, we're just asked to judge the shiny pictures," Tielman said.

Surdej said that was intentional.

"There was no attempt to get written comments from the public," she said. "The idea behind this was that there was enough staff from the Department of Transportation so that people could talk one-to-one with them, and we'd take back what we heard and consider it. It was just a less formal process."

That will be the only opportunity for the public to see and weigh in on the renderings, Surdej said.

Plans are to move forward quickly to get the train station started and completed.

"We're going to put a shovel in the ground this year and get this thing built," said Buffalo native John Maggiore, the state's director of policy.

A rendering of the proposed new downtown Buffalo train station at 75 Exchange St.

Looking away from the train station.

A rendering of the proposed station coming to Exchange Street in late-2020.