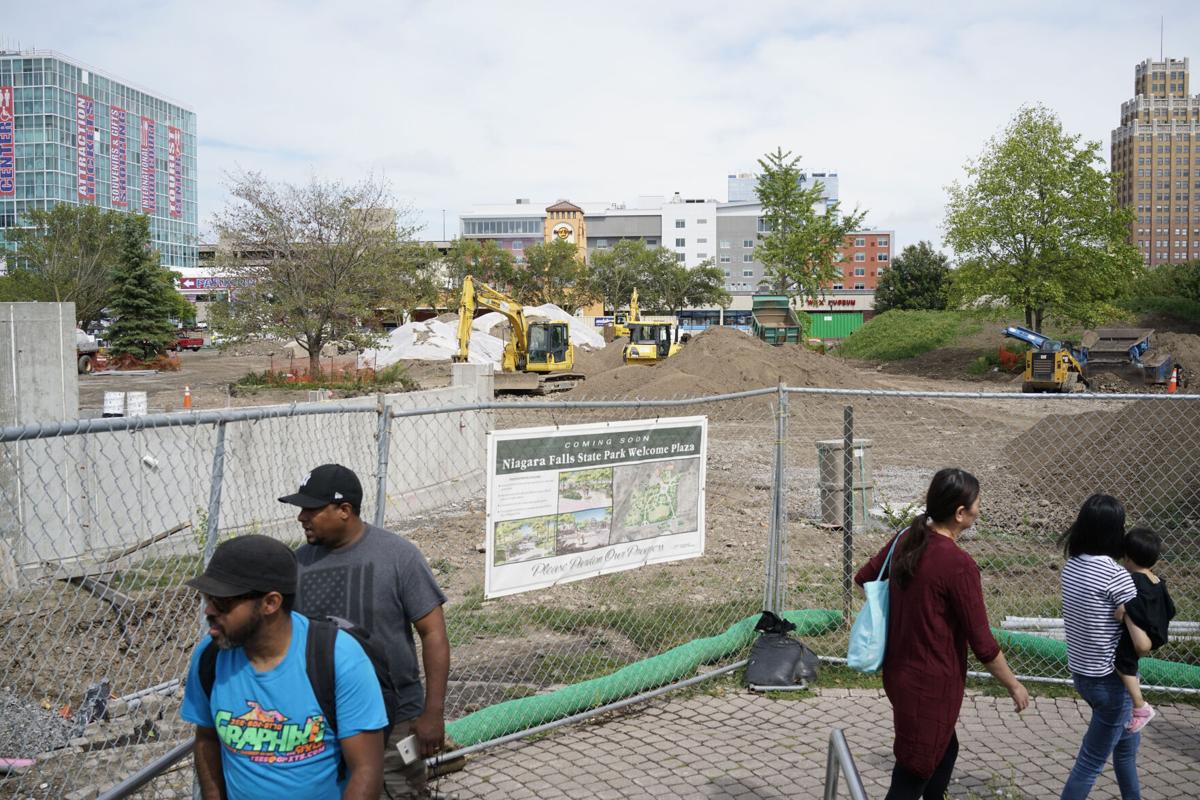 For the past three months, thousands of people every day have walked by piles of dirt at the entrance of Niagara Falls State Park on their way to the falls, one of the world's leading tourist attractions.

What they couldn’t have known was how close they were to radioactive waste.

No warnings are clearly posted. There are only two tiny signs more than 100 feet inside a fence surrounding the site of a new entrance pathway and bus drop-off lane.

The signs do not spell out radioactive waste but refer to TENORM – government shorthand for "technologically enhanced naturally occurring radioactive material."

State officials confirmed to The Buffalo News that tests by the Department of Environmental Conservation found low levels of radioactivity, along with petroleum waste and traces of benzopyrene, a cancer-causing chemical found in coal tar, cigarette smoke and vehicle exhaust.

"All compromised soil has been contained and there is no impact to health and safety," Randy Simons, spokesman for the State Office of Parks, Recreation and Historic Preservation, said in an email to The News.

"This is the same material that has been commonly found and properly and successfully removed in other projects throughout Niagara Falls," Simons said.

"This material has been secured in accordance with DEC regulations and is being shipped out of state over the next week," Simons said.

It will go to a facility approved to store such material, he said.

Besides the radioactivity, Simons said the DEC found "petroleum-based sources of contamination from when it was a parking lot and bus depot. Chemical contaminants associated with these materials have been recognized as nonhazardous and will be properly disposed in a secure landfill."

The waste was discovered in May by the general contractor, Scott Lawn Yard of Sanborn.

"Honestly, it's shocking for that area to be sitting there for so long without knowing the ground was contaminated," said Patrick Proctor, chairman of the city Tourism Advisory Board. "I did notice they stopped construction for a bit. I never even guessed why they stopped."

"I am presuming that because they didn't notify anybody or put up any signs, that it's not a threat to the safety or tourists or locals," City Council Chairman Andrew P. Touma said. "I'm hoping that assumption is correct."

The News has learned about 1,000 cubic yards of dirt is to be removed. The average commercial dump truck holds anywhere from 10 to 14 cubic yards of dirt, according to industry figures. It's unclear if the dirt at the state park represents all of the waste that is present.

The work may keep the $4.6 million entrance project from being completed until next year.

Some tourists were startled when a reporter told them about the radioactivity Tuesday, while others seemed unperturbed.

"Thanks for telling us," said Katie Cochran of Charleston, S.C. "Let's get away from it."

"Surprise, surprise," Diane Benham of New Hampshire said in a sarcastic tone when told there were no visible warning signs.

"It doesn't matter to me. I've lived a long life already. If this is what kills me, so be it," said George Oliver, 65, of Scarborough, Maine. "If they're going to haul it away, no harm, no foul."

"Some types of radioactivity are not dangerous to the people, because the radioactivity is low," said Mario Guelbauld of Saint-Jean-de-Matha, Quebec.

Some public officials regarded the discovery as just another day in Niagara Falls, a city with a decadeslong legacy of toxic pollution.

"Hey, this is Western New York. You dig in something that was put down in the 1940s or 1950s, you might find something you didn't expect," Niagara Falls City Planner Thomas DeSantis said. "Usually, it's not anything particularly hazardous.

"They buried stuff back in the day without any rules," said DeSantis said. "This stuff turns up everywhere."

"It's common in this area to find low levels of radioactive waste," said Touma of the City Council.

"Given the history of previous Niagara Falls projects it is not uncommon when these materials are discovered," said Simons, the state parks spokesman.

Paul A. Grenga, co-owner and managing member of One Niagara, a building across from the park containing tourist-themed shops, said the matter needs to be taken more seriously.

"This is the economic engine for the whole tourist industry in Niagara Falls," Grenga said.

He said the entrance project has impeded pedestrian access between the park and One Niagara, whose business is down about 15 percent this year.

Grenga said he wants a full investigation of what might be underground in the state park, even if an extended cleanup might hurt business.

"Where it's found and exposed, it should be addressed immediately," Grenga said.

"It would just make more sense to use the $25 million the state is using the buy vacant properties to invest in the cleanup of that park," he said.

The legacy of slag

For the past several years, there have been numerous reports of radioactive slag used decades ago as fill for everything from roadbeds to driveways at private homes in Niagara Falls and nearby communities such as Lewiston and Grand Island.

The fill was available cheaply or even for free from companies such as Union Carbide and Oldbury Electro-Chemical, which generated it as part of their industrial work, according to a federal lawsuit filed last year by 28 property owners against the corporate successors of those companies.

John G. Horn, the Buffalo lawyer who represents the property owners, said he knows of no health complaints from his clients.

"The claims we are making are strictly property-based harm claims," Horn said. "The defendants made a mess on our plaintiffs' property, and we want the court to make them clean it up."

In a few cases, the U.S. Environmental Protection Agency has become involved. Federal cleanups of radioactive slag have begun or are planned at such sites as the parking lot of Rapids Bowling Center in Niagara Falls and the driveway to Holy Trinity Cemetery in Lewiston.

A 1986 federal report listed about 100 radioactive hot spots in the region, none close to the park. In Niagara Falls, they were concentrated along Lewiston and Portage roads and Buffalo Avenue.

DeSantis, the Niagara Falls city planner, speculated that radioactive fill might have made its way into the park when the then-Robert Moses Parkway was constructed in the early 1960s.

That section of the parkway, near the main parking lot on Prospect Street across from the Hard Rock Café, was removed in the early 1980s and replaced with the Great Lakes Garden, which was destroyed this spring to make way for the new entrance project.

Niagara Falls' best-known incident involving radioactive slag probably was the reconstruction of Lewiston Road, which turned into a seven-year fiasco.

Officials knew of the slag in the roadbed in 2006, before seeking bids. Work began in 2009, but soon stalled. The contractor sued the city, claiming there was more radioactivity than it was told. The company lost the lawsuit, and another contractor finally finished the project in August 2013.

"When they discovered it on Lewiston Road, I don't think they took any precautions," said Touma of the City Council.

Radioactive slag has been removed from several other sites in Niagara Falls, including a location near the corner of Main Street and Rainbow Boulevard, not far from the Niagara River Gorge, where the state considered building a new State Park Police station.

In 2014, the state decided instead to build the police station along what is now the Niagara Scenic Parkway, opposite the Aquarium of Niagara.

Park Police say they responded to the Lower Gorge Trail at the park after receiving word a 15-year-old boy had accidentally fallen into the river.