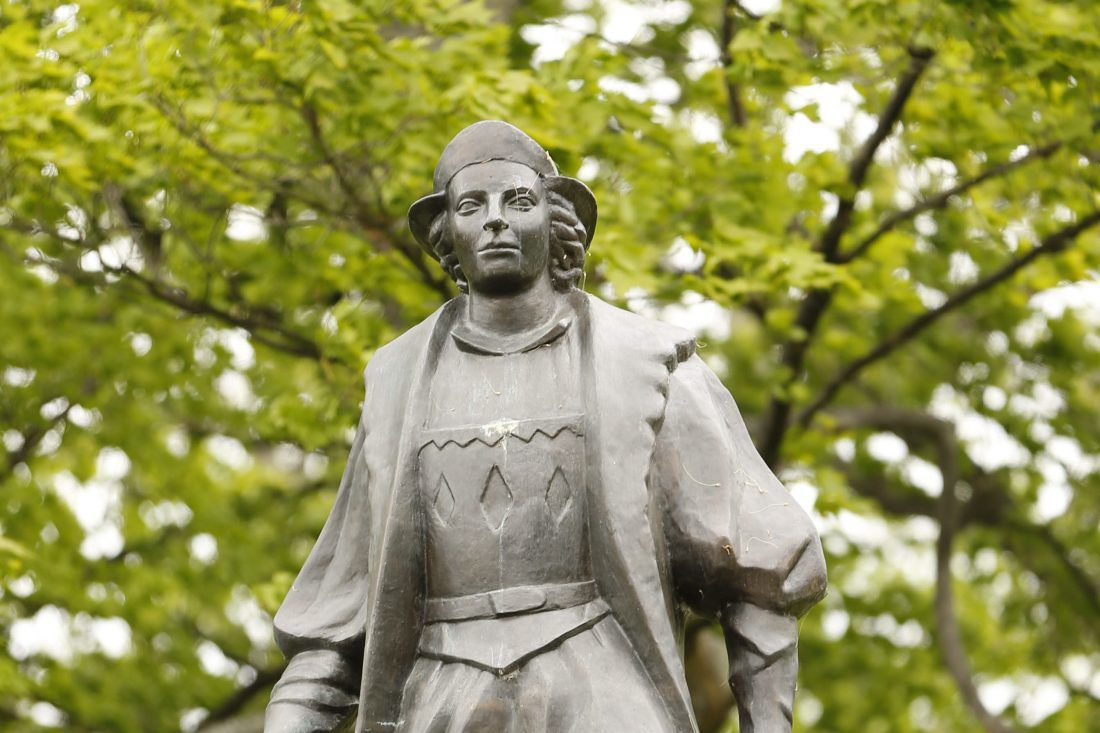 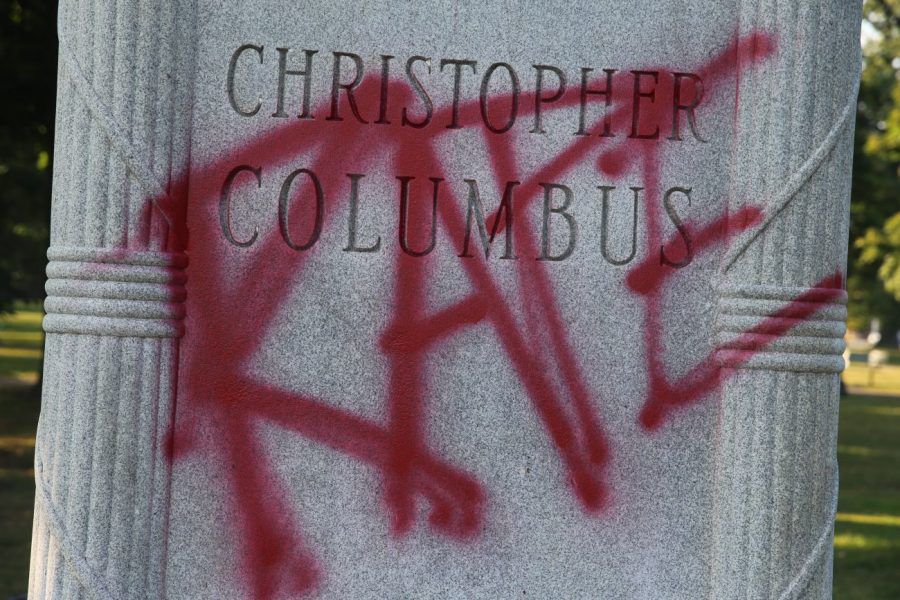 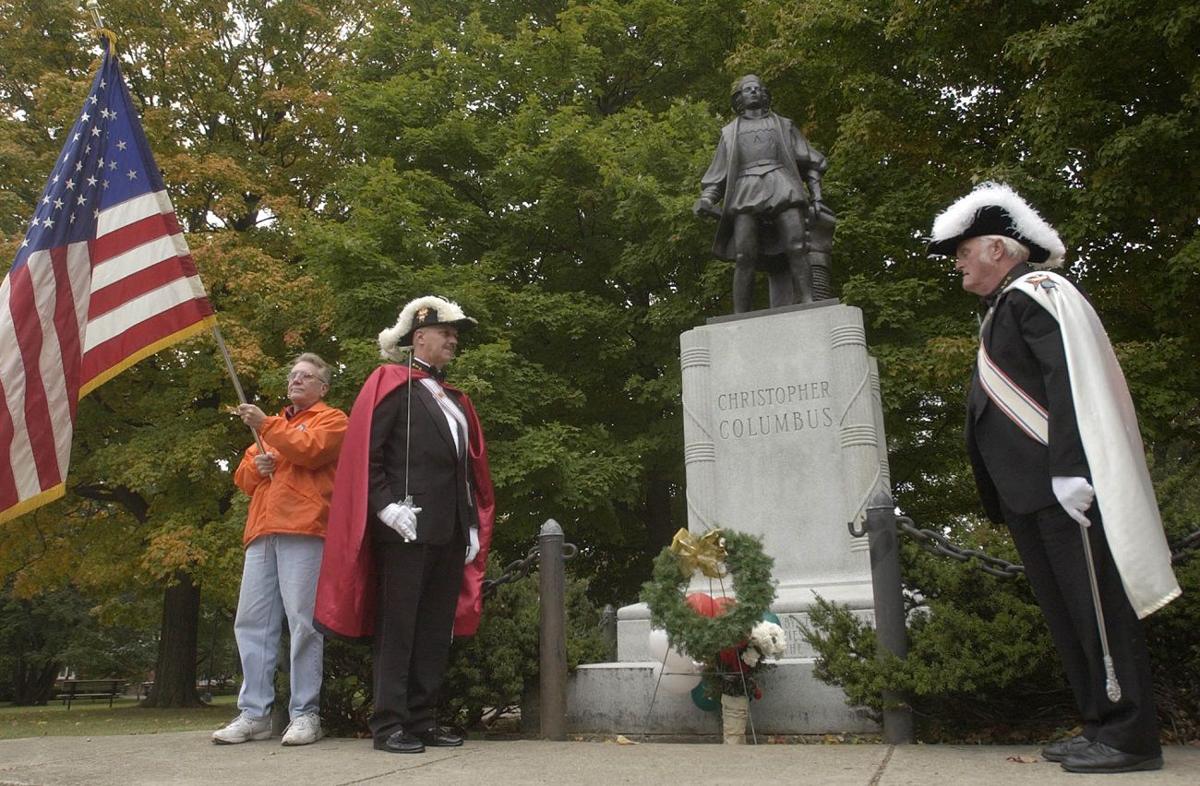 There's a petition to remove the statue of Christopher Columbus and rename Columbus Park in Buffalo. The statue is shown during a 2004 ceremony. (Derek Gee/Buffalo News)

An online petition calls for the removal of the Christopher Columbus statue from Columbus Park in Buffalo -- and for the park's name to be changed, as well.

The petition references efforts to remove Confederate monuments elsewhere in the country.

Columbus Park is located along Porter Avenue and Niagara Street in the city.

"Columbus did not 'discover' anything — the Americas were inhabited by a great diversity of people and cultures. Instead, Columbus established the beachhead for ruthless conquest and settler colonialism and inaugurated the genocidal devastation of whole continents," reads the petition, which was started by Brandon Absher, a Buffalo resident.

Absher, in a phone interview on Thursday evening, said,  "At the time that I started (the petition), it didn't get much momentum, but in the last couple of days it started picking up again. Friends remembered it and shared it on Facebook and it started to get a lot of 'shares'."

Once the petition reaches its signature goal, the plan is to deliver it to Mayor Byron W. Brown.

In September 2015, the statue was defaced with spray paint with messages including "rape" and "genocide."

Last October, someone put a garbage bag over the statue's head and wrote "Columbus was a slaver & a rapist" in chalk on the sidewalk in front of it.

Last year, there was a petition — similar to those in other places around the nation — for the City of Buffalo to rename Columbus Day, the October holiday.

A few local municipalities recognize the second Monday of October as Indigenous Peoples Day, though a push to change the name was rejected earlier this year by the Williamsville Central School District.

Italian-American heritage groups have fought against calls for a change to the name of the federal holiday.

Officials with the Federation of Italian-American Societies of Western New York offered these positions last December.

“We agree there should be great deference paid to Native Americans,” said Donald A. Alessi, a past president. “November is Native American Heritage month. That should be promoted, we feel.”

“We do not condone vandalism to city property in any way, shape or form. We believe it's a cowardly act and never justifiable,” said Peter LoJacono, a former president of the group.

"We wholeheartedly agree that indigenous people deserve their own holiday and proper recognition. In 2008, President Bush signed into law Indigenous People's Day, which is to be celebrated on the Friday after Thanksgiving," he said.

Monuments to Columbus were first erected at the turn of the last century, LoJacono said.

"It was, basically, to put a band-aid on a wound, and it was the fact that one of the largest mass lynchings in U.S. history was against Sicilians in New Orleans. At the time, Italian-American communities around the country were outraged. So they came up with honoring Columbus and giving Italians their day of Columbus Day, and it has been taken on as a day of ethnic pride for Italian-Americans beyond Columbus," said LoJacono.

Absher said he isn't unmindful of the ethnic pride that many attach to Columbus.

"I understand that that was an issue for people. However, I don't think Christopher Columbus is the right person to look to. I think when we choose our heroes, we should look to people whose records are in a good light, people we can admire and people who we would want to follow," Absher said.

"We know for sure from his own journals, his own hand, that was involved in pillage and murder. I don't think that's the sort of person you would want to point to as your hero," Absher said.

LoJacono said that the members of his group believe in diversity, but calls to remove statues of Columbus are divisive, pitting one ethnic group against another. Columbus, he added, should be judged by the times in which he lived.

"We do not believe that he introduced slavery, genocide or disease to this hemisphere. They had been occurring several hundred years prior in this hemisphere by Native civilizations, because they were a product of their times," LoJacono said.

"Taking (the statues of Columbus) down, you're judging him by the lens of the 21st century. If that's the case, where does that end?" LoJacono said. "They'd better look at Millard Fillmore and Grover Cleveland in that regard."

The online petition calls for "Native communities" to be consulted in the process of renaming the park.

Newstead prepares for its first Indigenous Peoples Day on Monday

There's a petition to remove the statue of Christopher Columbus and rename Columbus Park in Buffalo. The statue is shown during a 2004 ceremony. (Derek Gee/Buffalo News)