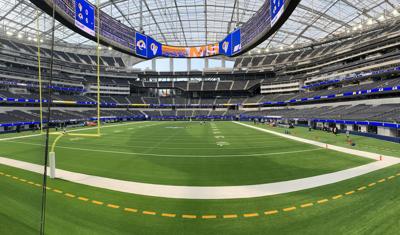 SoFi Stadium is the most expensive sports venue ever built in this country and is the centerpiece of a 300-acre, multipurpose development site in Southern California. Rams owner Stan Kroenke, worth a reported $10.7 billion, covered the full cost as its price tag ballooned from early estimates of less than $2 billion. The city is providing tax breaks that could reach $100 million over time. The stadium will host the 2022 Super Bowl and events for the 2028 Summer Olympics.

Clark County, Nev., wasn’t going to get the Raiders to move from Oakland, Calif., without putting up a significant share of the cost of a new stadium. The county planned to cover its portion with a 0.88% increase in hotel taxes. However, the Covid-19 pandemic battered tourism in Las Vegas, so the county already has dipped into a reserve fund to meet its required stadium debt payments.

The state donated land for the stadium valued at $14 million. A stadium authority raised $200 million in bonds that will be paid back through stadium revenue and a portion of a 7% city hotel and motel tax. The deal kept the team in Atlanta but it raised eyebrows because it replaced a stadium, the Georgia Dome, dating back only to 1992 and constructed fully with public funds.

The state agreed to pay $348 million toward the cost of the stadium, with the Minnesota legislature legalizing a new form of gambling, electronic pull-tabs, to cover its portion of the stadium debt. The City of Minneapolis covered the remaining $150 million by redirecting convention center tax revenue.

The sale of stadium assets such as the naming rights, worth a reported $11 million annually, and seat licenses is meant to cover most of the cost of the stadium. The City of Santa Clara, which lured the 49ers away from San Francisco, agreed to pay an amount capped at $114 million, including $20 million to relocate and upgrade an electricity substation, $17 million for a parking garage and $35 million raised by a 2% tax on guests at eight hotels near the stadium.

Another example where the team, or teams in this case, covered the full cost of the stadium itself but taxpayers still made a considerable commitment to the project. The state provided the land for the stadium and training facilities and spent more than $250 million on improvements to highways, a new train station and utilities. The teams also control hundreds of acres of parking lots around the stadium.

The public share includes a 0.5% city sales tax increase, 2% city hotel tax increase, 5% city car-rental tax increase, 10% stadium admissions tax, 3.5% parking tax for stadium events and a $25 million county payment. The Cowboys, thanks in part to their palatial stadium along with league-high levels of revenue and operating income, are the most valuable NFL franchise, according to Forbes, worth an estimated $6.5 billion.

Critics say the agreement, dubbed a “sweetheart deal” by Forbes, includes too much public money. Negotiators say they were a small market starting with a bad hand. At the old stadium, Indianapolis paid the team $13 million annually – the difference between the Colts’ revenue and the median revenue of an NFL team. Hotel, car rental and restaurant taxes cover most of the public share in the new deal. The Colts get most stadium revenue and the city still was paying off the former RCA Dome more than a decade after it was imploded.

The Cardinals threatened to move unless they got a new stadium, largely financed by taxpayers, to replace the stadium at Arizona State University in Tempe where they played home games. The team also sought a larger share of game-day revenue. The county agreed to impose car rental and hotel taxes, aimed at tourists, to cover most of the public share.

The public share included a state grant and a tax increase on rental cars. Critics complained about secretive negotiations and an end-of-year deadline that have required the city to cover the cost of $80 million in repairs to Veterans Stadium, where the Eagles and the Philadelphia Phillies baseball team played, if a financing deal on new venues for both teams wasn’t struck in time.

Wayne County taxes aimed at tourists – 2% rental car tax increase and 1% hotel room tax increase – and payments from the city of Detroit, the state of Michigan, and a quasi-public development authority covered the public share.

Though the Patriots owners paid the full cost of the stadium itself, it’s important to note the state paid $72 million on road, sewer and other infrastructure improvements around the site. That was part of a last-ditch effort to keep the team from moving to Hartford, where Connecticut had offered to build a $374 million stadium at no cost to the Patriots and their owners.

The biggest part of the public share, $127 million, comes from the Washington State Lottery. A county sales tax and hotel and motel tax also contribute to the public portion, along with stadium parking and admissions taxes. The Seahawks will use naming rights revenue to pay for stadium improvements and capital projects.

A 0.1% sales tax increase across six counties, along with interest earnings and the public share of naming rights revenue for the stadium, make up the public share. The deal gave the team control over nearly all stadium-related revenue but did require the Broncos to pay for a bigger share of operating expenses.

The public commitment included revenue from sales and hotel taxes, state and federal funding for infrastructure, a state grant and ticket surcharges. As is the case with many NFL teams, the Steelers keep the vast majority of the revenue generated at their publicly owned stadium.

Most of the public spending comes from a 0.5% increase in the county sales tax, used to pay off debt and maintenance for the city’s NFL stadium and a stadium built at the same time for the Cincinnati Reds baseball team. The Bengals had threatened to leave town unless they got a new stadium. The lopsided negotiations left Hamilton County taxpayers with what the Wall Street Journal later deemed “one of the worst professional sports deals ever struck by a local government.”

Cleveland had lost the Browns to Baltimore, where owner Art Modell moved and renamed the team in 1996 in frustration after not getting a new or renovated stadium in Ohio. The Browns were revived in 1999 after Cleveland agreed to build a new stadium for the team. The city borrowed its share of the cost of the stadium and initially relied on an alcohol and cigarette “sin tax” to pay off this debt before shifting to the general fund. The city receives some game-day revenue, such as parking and a tax on ticket sales.

The Oilers left for Tennessee after Houston refused to build the team a football-only stadium. They bounced around for two years before work concluded in 1999 in Nashville on what was initially called the Adelphia Coliseum before that company with Buffalo ties went bankrupt. Nashville paid $150 million toward the stadium costs, covered through hotel and motel taxes and surplus funds. The state agreed to pay its portion through sales tax generated by stadium activity.

Maryland lured away the Cleveland Browns, rebranded as the Ravens, with the promise of a new stadium in Baltimore largely financed with public funding. The state borrowed $200 million toward its cost and paid off the debt in part with money from Maryland’s lottery and stadium-related revenue.

Hillsborough County voters in 1996 approved a half-cent increase in the sales tax for 30 years to use to pay off the cost of the publicly financed stadium, among other purposes. The owners of the Bucs had threatened to move if they didn’t get a new stadium. A former Tampa mayor had argued the use of the sales tax money for a stadium wasn’t legal, but his court challenge didn’t succeed.

Note: Costs in dollars are from the time each stadium opened. This list doesn't include stadium renovations. In cases where sources conflict on stadium costs or financing breakdowns, The News relied on the preponderance of publicly available information.

Your guide to the road to a new Bills stadium

From the time we first heard of preliminary talks about a  new Bills stadium, our team has been there to bring you news about the deal. Catch …

An analysis of available financial information found the public paid an average of 50% of the cost of constructing the 21 most recent new NFL stadiums, with the team covering the rest.

"Just do it," said Larry Quinn to whether New York State and Erie County should help the Pegulas construct the $1.4 billion stadium project they are seeking.