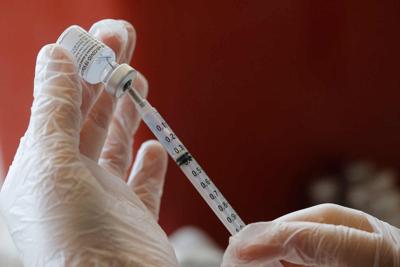 This is a story about what’s next. But first, let’s get nostalgic.

Remember when our second biggest problem was people hoarding toilet paper? Or when it was considered trendy and community-minded to order takeout – and innovative when those restaurants would bring your food to the curb?

Remember in March 2020, when the pandemic started, how we (mostly) all came together?

Not everything has changed. It’s still cool to support your local eateries – when they have enough staff to actually open. And the biggest problem during that short-lived era of toilet paper towering in grocery carts wasn’t hoarding. It was, of course, Covid-19 itself, and the swift, devastating and demoralizing levels of sickness and death it brought across the world.

Today, one in 500 Americans have died of Covid. The virus is still the problem – here and everywhere. If Covid has touched your life directly, you have likely experienced some aspect of that pain. Even if you have somehow evaded Covid altogether, you’re probably tired.

“It wasn’t any fun to begin with,” said Dr. John Sellick, a Buffalo-based infectious diseases physician who has been treating patients – and acting as one of the region’s de facto spokespeople on Covid issues – since the start of the pandemic. “But now a year and a half later, it’s really no fun.”

What, then, can we expect in the coming months and beyond? We explore that question in this week’s Pandemic Lessons.

How is Western New York faring?

By the numbers, not great. But there are some important bits of good news.

Western New York’s average daily case count is 454 as of last Friday. That’s a nearly six-fold increase from one year earlier, when the Delta variant wasn’t a thing – but neither was vaccination, which slows spread. The region’s average Covid hospitalization number is 220 people – more than quadruple from a year ago. Perhaps most critically, the average number of patients in intensive care is 53 – also more than four times the number (13) from 12 months earlier.

On the positive side, the region’s daily death counts are consistently hovering in the low single digits. This is true of counties across New York, and is likely attributable to the high vaccination rates of older, frailer and more vulnerable people, combined with more medical knowledge on how to treat severe Covid.

Vaccination was supposed to make it better. How are we doing?

Our vaccination rates vary widely by county. In Western New York’s most populated county – Erie, with nearly 920,000 people – 66.5% of residents have at least one dose. That’s slightly ahead of the national figure (65.3%) but several points behind the New York statewide number (72.2%).

The region’s smallest county – Allegany, with just over 46,000 residents – is also the state’s least vaccinated: Nearly six out of 10 people have not gotten a shot.

People’s level of immunity – which includes, to some degree, the difficult-to-measure protection that comes from previous infection – will play into what happens next. One year ago, Western New York’s average case count was less than 100 through most of October. But following Halloween and Thanksgiving and heading into the holiday season, that chart jutted steeply upward, like Mount Everest looming on the horizon. By early December, the average case count was nearly 900; by January, it reached over 1,000.

That same dynamic played out across the state and the country, and medical experts are concerned it could happen again.

“Right now, we’re looking at a tough winter if we don’t get higher rates of immunity,” said Dr. Stuart Ray, vice chair of medicine for data integrity and analytics at Johns Hopkins Medicine. “The best way to get there, scalably and verifiably, is with vaccination.”

How does influenza play into the outlook for this winter?

Following an early spike in respiratory syncytial virus – or RSV – among pediatric patients in late summer, doctors are concerned that the influenza virus will mount an aggressive comeback. Both of those viruses were largely invisible last year, when most people were masked and distanced. But now that kids are in school, people are together and mask-wearing is looser, there are plenty of opportunities for those viruses to leap. Our immune system may be less equipped to combat them, too, because we didn’t see them last year.

“The real question is, when we see (flu), how bad will it be?” said Dr. Sharon Nachman, director of the Division of Pediatric Infectious Diseases at Stony Brook Children’s Hospital. “Will we see patients who have flu (and) have Covid at the same time?”

When that happens, medical staff will face a new and daunting challenge: treating two potentially dangerous illnesses simultaneously, while trying to differentiate which physical impacts are tied to flu and which are being caused by Covid.

“All we can do is say, ‘Please wear a mask and please think about getting a vaccine, because that’s going to make a difference,’ ” said Nachman, noting that the likely imminent approval of Pfizer’s vaccine for ages 5-11 will help cut spread and largely keep those children safe.

“While they may still get some infections,” she said, “they actually won’t get significantly or seriously ill or wind up in the hospital.”

What else can we do to stay healthy?

Here are some ideas:

1. If you’re fully vaccinated and eligible for a booster, get it. A study released this week by the New York State Department of Health found that vaccine effectiveness in preventing hospitalization exceeded 86% for people ages 18-64 between May and August, which coincides with the spread of the Delta virus. For people 65 and older, effectiveness in preventing hospitalization dropped slightly for Pfizer (95% to 89.2%) and Moderna (97.2% to 94.1%). The Johnson & Johnson vaccine ranges from 85.5% to 82.8%.

The people included in the study, which is not yet peer-reviewed, were vaccinated between January and April 2021. The drops in effectiveness found in people under 65 seemed to “have leveled off when the Delta variant became the predominant strain in New York,” said Dr. Eli Rosenberg, an epidemiologist with the Department of Health and lead study author, in a release. “Ongoing waning protection may be less of a current concern” for people under 65, Rosenberg said, but the findings also reinforce “the need for boosters in older people in particular.”

2. Keep up on medication and other vaccinations. Be sure to take any prescribed medications for conditions that could make you vulnerable if infected.

Other vaccinations count, too. That includes flu shots for kids and adults, and routine vaccinations for children. Dr. Nipunie Rajapakse, a Mayo Clinic Children’s Center pediatric infectious disease specialist, noted in a press call this summer that many children have fallen behind on routine vaccinations that address conditions such as measles, mumps, rubella and whooping cough.

“One of our concerns as pediatricians is seeing outbreaks of those infections starting to occur as kids start to gather together and mix more and travel more,” she said.

3. Be proactive with your health. You can keep strong and boost your immune system by getting adequate sleep and eating healthfully.

Tim Spector, who is a professor of genetic epidemiology at King’s College London, advised during an interview earlier this year to monitor snacking, cut down on “ultra processed foods,” and focus on macronutrients.

“A good thing from the pandemic is the awareness of how important obesity is, and how important diet is not only to obesity, but also immunity,” said Spector, the author of “Spoon-Fed: Why Almost Everything We’ve Been Told About Food is Wrong.”

How does this play out over the next couple of years?

“I think we need tea leaves for that one,” Sellick said, noting “a general feeling in the scientific community that with enough vaccination, and as this virus circulates more and we get more people with some reasonable level of immunity, that it will move more toward the direction of being like all the other crummy viruses we get usually during the winter. That’s what we’re hoping is going to happen.”

Imagine Covid as the equivalent of the common cold, or manageable and treatable as most cases of the flu? Unlike March 2020, when we were hunkering down and hoping for a return to normal within weeks or maybe months, this is the new dream scenario.

“We can no longer talk about, ‘We’re going to eliminate the pandemic,’ ” said Dr. Gregory Poland, director of Mayo Clinic's Vaccine Research Group, in a summer media call. “We’re going to be now transitioning scientifically into, ‘What does it mean to live with this virus, as we do with influenza?’ ”

Pandemic Lessons: When do we know it's OK to listen to the science?

“Science is not built on a single study,” said Sumit Chanda, an infectious diseases expert at Scripps Research and a Williamsville native. “It’s built on a body of work that is done by multiple, independent people and labs that build a consensus around our understanding.”

In this “Pandemic Lessons,” we explore vaccination versus natural immunity. The questions, it turns out, are more precise than the answers.

After a year of 'Pandemic Lessons,' a question: What do – and don’t – we know?

One year after this series began, Western New York’s average case count exceeds 400 per day, and though the rate of spread is slowing, the steepest rise is among unvaccinated children.