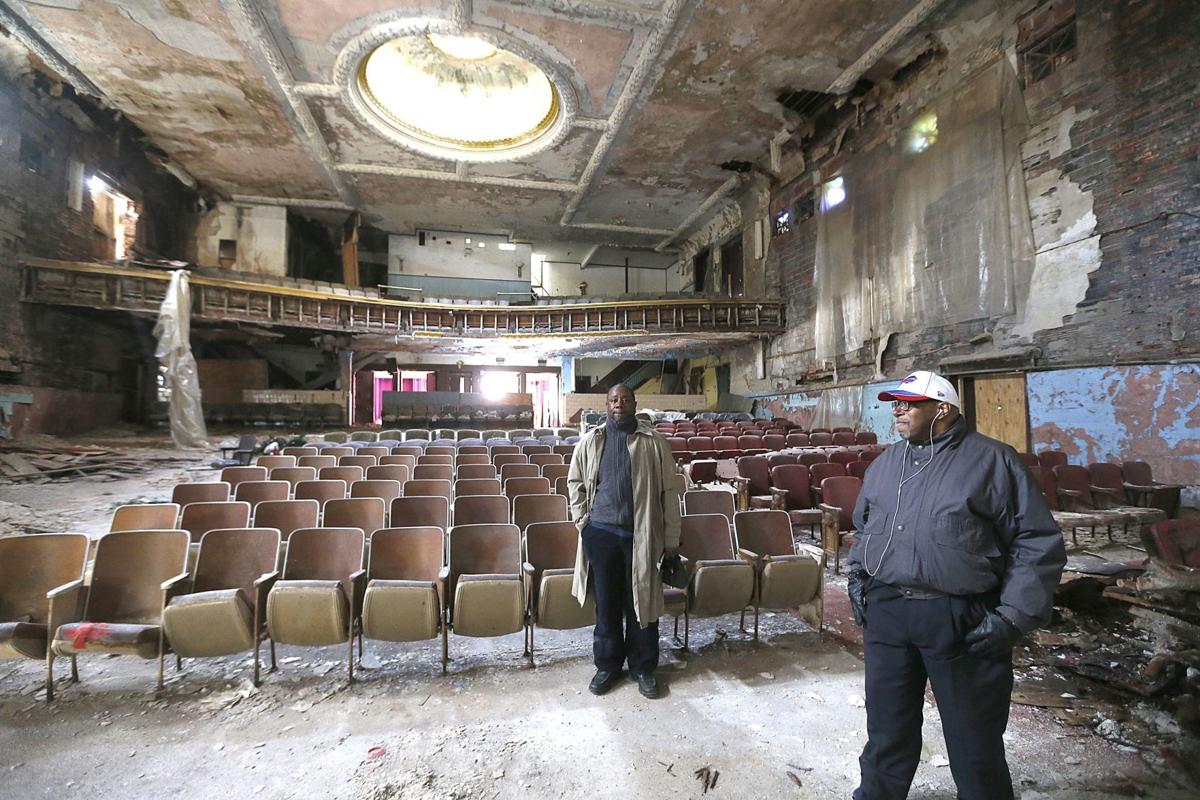 Dwayne Kelly, right, and Michael Quinniey think the old and crumbling Broadway Theatre on Broadway can and should be restored to its former glory. 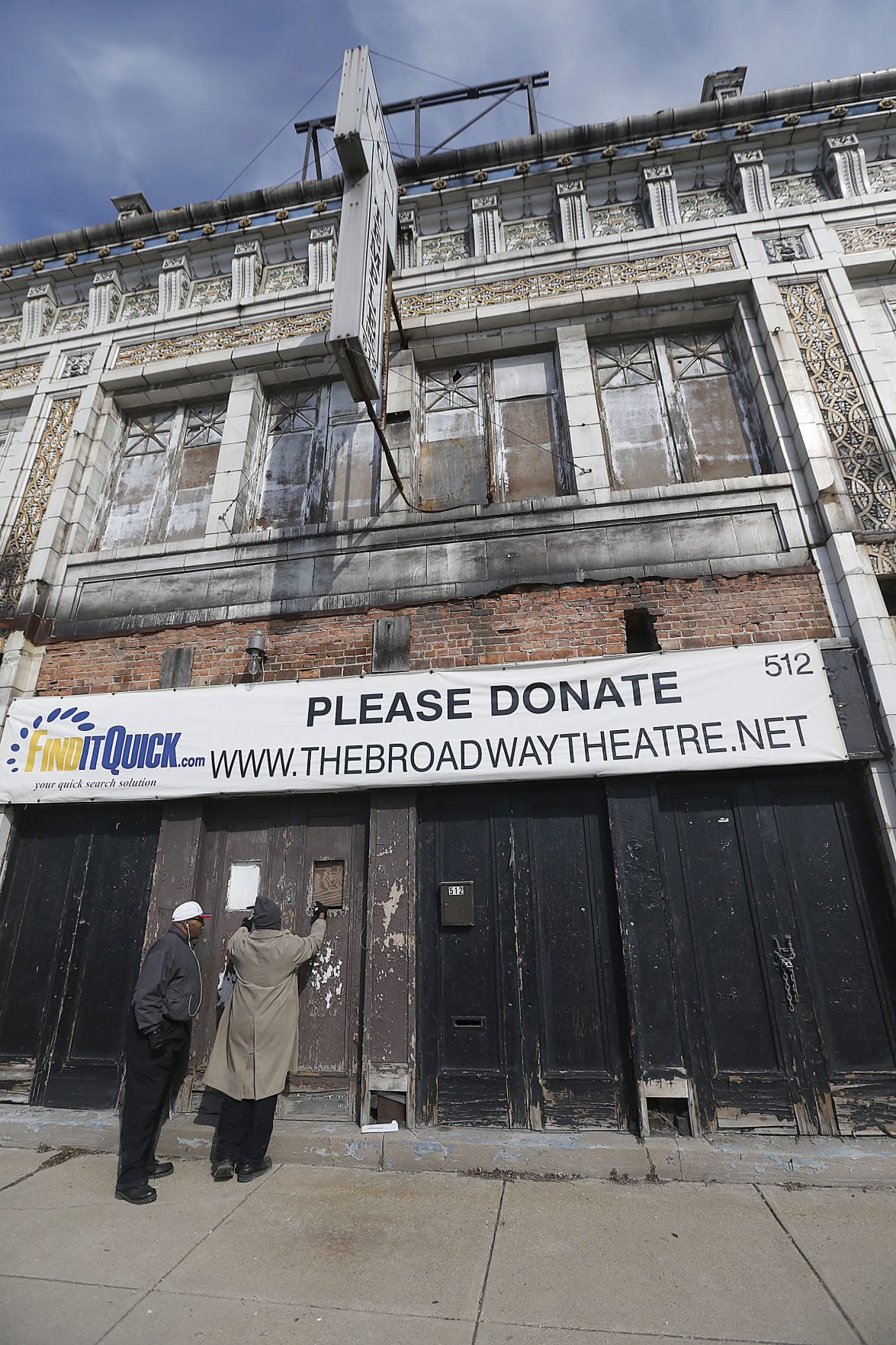 Lovers of the old and crumbling Sattler Theater on Broadway in Buffalo have a dream of seeing the restoration of the old showplace come to fruition with the help of Carl Paladino and Ellicott Development Corp. which have agreed to be developers of this former African American theater that has been shuttered for decades. This was on Tuesday, March 24, 2015. (Robert Kirkham/Buffalo News) 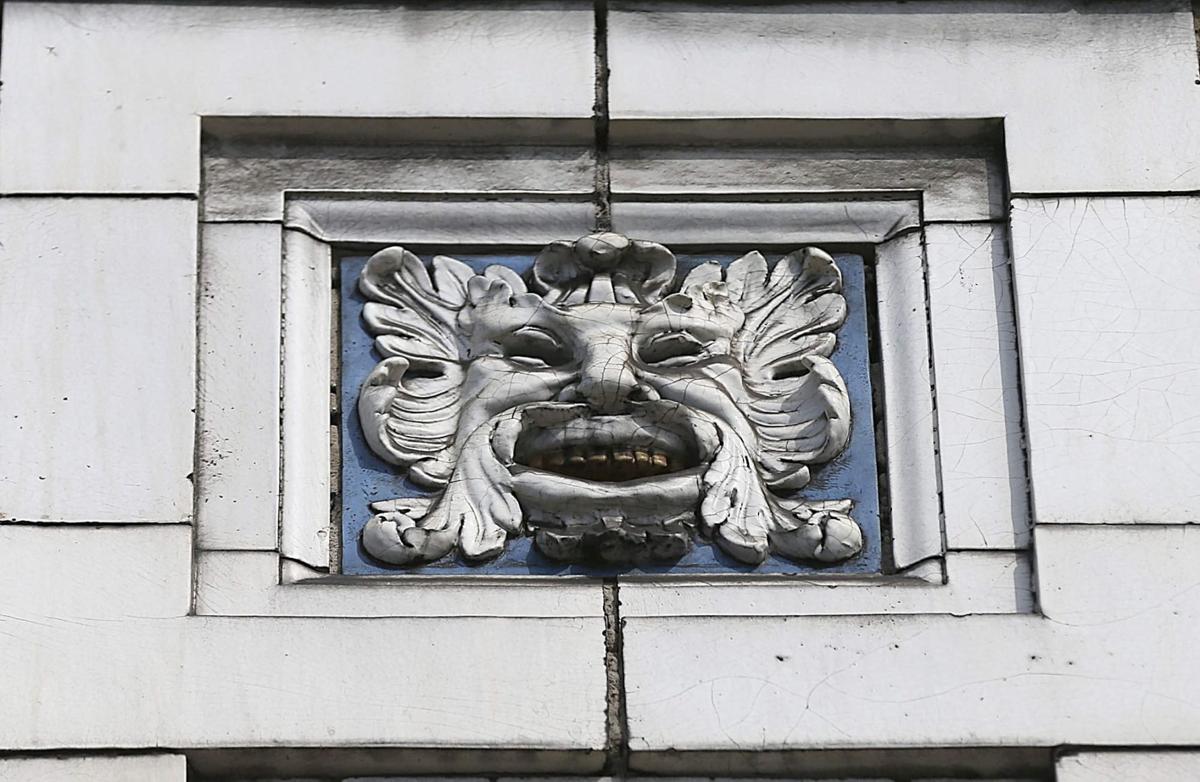 A detail of the cracked exterior. 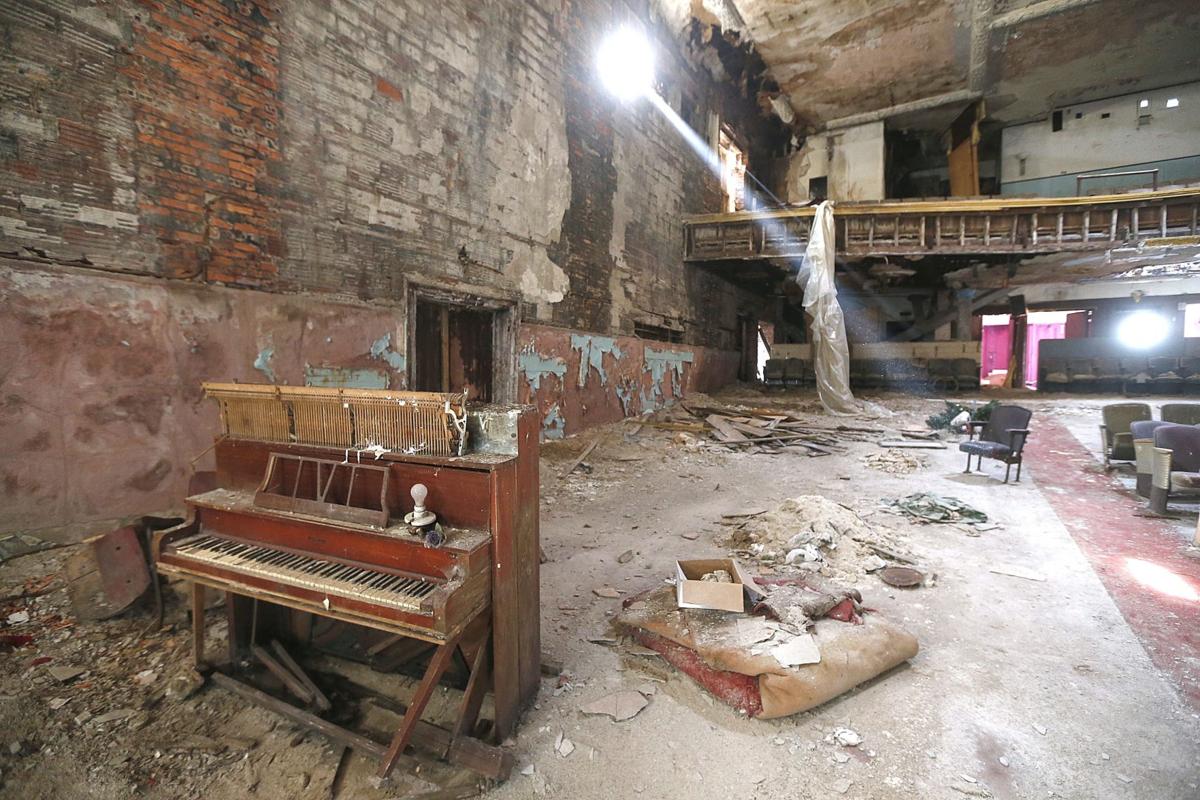 The 100-year-old Broadway Theatre stands as a grim reminder of its East Side neighborhood’s decline.

Plaster has worn off the brick walls of the former movie theater, and most of the remaining, musty seats are damaged beyond repair. The tarnished ceiling dome only hints at its former splendor.

Seven years ago, a group of African-Americans working in media bought the vacant theater at 512 Broadway, just east of Jefferson Avenue. They want to create a multimedia performance space and a place to teach media arts to youth.

They wrote letters to foundations, appealed to the mayor and contacted developers seeking support.

None stepped forward – until Carl Paladino answered their call.

At their first meeting three months ago, the developer offered to have Ellicott Development, his construction and management company, be the project manager to guide the building’s renovation from design through construction. His company’s involvement, he said, could also help attract donors.

“They’re really sincere, straight-up people,” Paladino said. “I have a lot of faith in them, and I’m trying to help by going somewhat public on it. By putting our credibility behind their project, I’m helping them to go out to the community to raise the necessary funds to do the renovation.

“We adopt projects once in awhile for good, earnest people,” Paladino said. “I think, whether it was my church or one of the schools we’ve helped, that we have helped put them on the right track to get the project done. I have a good crew of project managers and construction managers that will carefully watch over every aspect of the project, and make sure it’s done right.”

Paladino’s offer to help floored Michael Quinniey, a founding member of Western New York Minority Media Professionals. He had grown accustomed to having doors shut – if they had cracked opened at all – and found Paladino’s interest genuine.

“He liked that we had put in a lot of hard work, and we didn’t cry when things weren’t going our way. And he liked the project,” Quinniey said.

“We were very flattered to get Carl’s offer to be project manager, because quite frankly it was more than we dared hope for,” Quinniey said.

“We went to him asking him to be an advocate for the building, and he said, ‘I think I can make this work.’ It wasn’t about money for him,” Quinniey added.

The Beaux Arts-style theater opened in 1915 as the Sattler Theatre. It was commissioned by John G. Sattler, who also owned Sattler’s Department Store at 998 Broadway.

The 928-seat movie theater cost $35,000, according to theater historian Ranjit Sandhu. The architect was Henry Spann, who also designed the North Park Theatre on Hertel Avenue and the former Savoy Theatre on William Street.

The Sattler changed hands in 1920, and was rechristened the Broadway Theatre, and later, Basil’s Broadway.

It’s last phase, beginning in the mid-1960s, was as a house of worship. The theater became Muhammad’s Mosque 23 – boxing champ Muhammad Ali visited – before God’s Holy Temple took it over and then leased the building to Joy Temple Church until 1996. It has been unused since then.

The media group wants to revitalize the space by removing the back wall to build a larger stage and add seating. The group will have to put in new seating, sound, lighting and HVAC system. It also wants to build an addition for bathrooms, a refreshment stand and a lounge.

The preliminary price tag is around $7 million.

Paladino said the theater’s problems were only “cosmetic” and not structural, despite its century-old age.

“We’re trying to restore our history and a sense of pride in our community by restoring one building and one block at a time.” he said.

The Broadway Theatre would join a select group of theaters, if it reopens.

Only 27 African-American theaters still operate as performance halls, according to filmmaker Wendy Hacker of Loose Threads Cinema, who researched historic black theaters for a film project.

They include the Howard Theatre in Washington, D.C., and the Booker T. Theater in Rocky Mount, N.C.

“Most of these theaters, with very few exceptions, were smaller affairs and not as splendid as the Broadway Sattler. That theater is such a grand old dame, and it will be magnificent when it’s done,” Hacker said.

Christina Lincoln, director of operations for Preservation Buffalo Niagara, said theaters have the potential to rejuvenate an area. She saw it happen in Cleveland with the revitalization of the Capitol Theater.

“Things do happen gradually, and it took many years for them to open the theater again and make a project like that feasible, but when that theater came back to life, a lot of life started to spring up around it,” Lincoln said.

“I think people are starting to recognize the assets that are on the East Side, and I’m hoping some of the downtown rejuvenation, and on the West Side, starts to spread to the East Side now.”

Paladino’s support of black media workers may surprise some, given the racially tinged disputes he is embroiled in on the Buffalo School Board and his past controversies over emails.

Paladino scoffed at the notion anyone should see his involvement through a racial lens.

“By far, I’m the last person you can call a racist. That’s what people (say) when they have no other excuse for their behavior,” he said. “It’s just terrible the African-American leadership is so devoid of competence.”

“I’m aware what has been said about Carl, and they don’t know the Carl I know,” Kelly said. “He has been nothing but sincere and nothing but helpful.

“If the guy was the bigot they say he was, he wouldn’t have given us the time of day,” Kelly said. “Instead, he gave us two hours, lunch and an offer to help.”

The group and Paladino see eye-to-eye on the project.

“The theater is going to provide opportunities for young people, black and white, as a center not only for entertainment but also media production,” said Kelly, whose father used to take him to the Broadway to see westerns as a child.

“We’re trying to build an entire new middle class in the black community that is not solely dependent on government and that knows how to reach into the private sector to move the community forward,” he said.

Reopening the theater, Paladino said, could spur investment on nearby property where Buffalo Forge Co. once stood.

“The building is in an area that isn’t so pretty,” Paladino said. “I think it will be a jewel that might be an inspiration to others to do other things around it.”

The grants come from a five-year, $5 million fund set up by Empire State Development as part of a $65 million East Side Corridor Economic Development Fund.

Dwayne Kelly, right, and Michael Quinniey think the old and crumbling Broadway Theatre on Broadway can and should be restored to its former glory.

Lovers of the old and crumbling Sattler Theater on Broadway in Buffalo have a dream of seeing the restoration of the old showplace come to fruition with the help of Carl Paladino and Ellicott Development Corp. which have agreed to be developers of this former African American theater that has been shuttered for decades. This was on Tuesday, March 24, 2015. (Robert Kirkham/Buffalo News)

A detail of the cracked exterior.