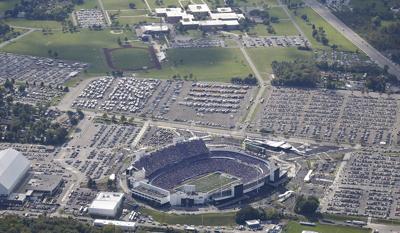 What do the Buffalo Bills mean to Orchard Park?

Ask Mark Ebeling, whose family owns Danny's South, a tavern that opened 22 years ago on Abbott Road in the shadow of Highmark Stadium.

What’s ‘home of the Bills’ worth to Orchard Park?

‘We are on the map as the home of the Buffalo Bills,’ said one town

“Come down here on Sunday and see how much it means,” Ebeling said.

Orchard Park's identity has been tied to the Bills and the games it hosts in the stadium on Abbott for five decades. But the relationship between town and team became more tenuous in recent years as talk centered on building a new stadium in downtown Buffalo. A decision on that key question has not been made, but if the team gets its way, Orchard Park will continue to be known around the world as the home of the Bills.

But some wonder if the town is doing enough to take advantage of being home to the Bills and wonder why more business has not gravitated to the town. While the team's presence may cost more than it earns the community, many in Orchard Park still say it's worth it.

"The Patriots are there in Foxborough, everybody knows that," Keem said, referring to the Bills' hated rival in New England. "People nationally know Orchard Park from the football broadcast."

Niagara Falls and Buffalo may be the only local communities that rank higher than Orchard Park in national name recognition. John Cimperman, a locally based sports marketing consultant, said those bragging rights have value, but he asked: "How do you translate that to a benefit?”

Five decades ago, he noted, when the stadium was planned and constructed, “ancillary development was a foreign term.” Today, stadiums are viewed as a “hub” for surrounding development, Cimperman said.

Orchard Park may be ready to change that. Town Planning Board Chairman Harold Fabinsky said he knows of a number of projects that are being held back from being proposed until the question of where the Bills' long-term home will be is settled. Orchard Park Councilman Gene Majchrzak, who will become supervisor Jan. 1, said the Bills boost the town's businesses, but he said the name recognition does little to boost the town's bottom line. He said he would like to see the Bills move across Abbott, and have a retail area with restaurants and a hotel where the current stadium is located, with a walkway over the road.

As Bills stadium talks ramp up, here are three points to watch

All sides want the same thing: The Bills playing in Western New York over the next few decades in a newly built venue. But even if everyone involved wants to make that happen, it's tough to pull off.

"We've hosted for decades, why not continue hosting when these improvements are going to be here?" Majchrzak said.

If the Bills went to Buffalo, Orchard Park would lose the tailgating, private lot operators would lose income from parking cars and the benefit to small businesses in town would evaporate, Majchrzak said.

Don Lorentz, executive director of Orchard Park Chamber of Commerce, said he would like to see more places for people to visit and stay overnight in town.

"How do we make Orchard Park more of a destination on those game days?" Lorentz said. "We’ve kind of missed our opportunity over the years by not making it a destination."

Some businesses that see a direct boost from the Bills are the restaurants and bars surrounding the stadium. The team’s eight or nine regular season home games and one or two preseason home games each year generate about one-third of the annual revenue for Danny’s South, Ebeling said.

As stadium talks focus on Orchard Park, some question: 'Why not downtown?'

Tuesday's hearing represented a rare opportunity for the community to publicly take a stand on a process that has been mostly behind-the-scenes, aside from consultant reports and occasional statements by the governor, Erie County executive or Pegula representatives.

Fans fill the restaurant before, during and after the game, he said, and Danny’s earns additional money by parking vehicles, including tour buses, in its lot. Ebeling said people who tailgate in campers also stop by the day before to drink and eat.

“Home games, it’s amazing: You have 70,000 people walking past your front door,” said Peggy Cerrone, an owner of O’Neill’s Stadium Inn, who echoed that home games make up one-third of her annual business, too.

She said O’Neill’s will go through about 14 cases of chicken wings the weekend of a home game, with each case containing 220 wings.

She called Bills home games a “cushion” for her restaurant at a time when the cost of everything is rising. But Cerrone wishes more development had taken place around the stadium.

“The town has really not been very cooperative in letting this get built up,” she said.

The deal kept the Bills in Western New York, but put off the more difficult, expensive and controversial decision on building a new stadium.

The Bills seek homes in and around Orchard Park because they like living near the stadium and each other on spacious lots, said Amy Pfister, whose real-estate clients include many current and former team members.

“All I know is I see them coming together and purchasing properties in the Southtowns,” she said.

The benefits of national visibility and visiting fans opening their wallets in town outweigh the inconvenience of game-day traffic, which isn’t as bad as it was, said Erie County Legislator John J. Mills, a former Orchard Park Town Board member. He acknowledged the stadium hasn't produced much spinoff development. That’s partly because the town restricts the height of new construction and partly because of years of uncertainty over the stadium's fate, he said.

When a decision is made to build a replacement in the town, Mills said, “I think it’s going to change.”

In addition to significantly increasing the number of officers on duty for a game, additional dispatchers are assigned. There also are more calls on days leading up to the game as fans pull into camper lots, and it continues the day after a game, when people file police reports about damaged or stolen items. Police also meet with Bills security before and after games.

The costs associated with staffing the stadium for a season's worth of Buffalo Bills games are at least $120,000 in overtime, Fitzgerald said. And none of that is reimbursed by the Bills or Erie County.

There are events at the stadium about 300 days a year, Fitzgerald said, although most are smaller than an NFL game.

It's not just paid first responders who gear up for game day. Windom Volunteer Fire Company firefighters spend about eight hours on game days on standby at the fire hall.

"The people that belong to the fire department have been doing this since the Bills came here," Orchard Park Fire District Chief Jay Knavel said. "We watch the game via television like everybody else."

He said the benefits of having the Bills there outweigh any downside.

"Most people from around here go to the games, too. It's not a nuisance to most of them," Knavel said.

A recently released consultant’s study commissioned by New York State determined construction of a new stadium in Orchard Park would not generate much new development in the town.

“This could change through concerted policy efforts by the municipality, county, state, and/or team, however, community facility uses are likely the most feasible given demand trends,” according to the AECOM report. “Assessed property values are unlikely to change significantly.”

"The benefit of having an NFL team in our community is incredible. There’s only a couple suburban areas that actually have that clout," Lorentz said. "That's something I would hate to see us lose."

With time ticking on Bills stadium talks, what leverage does each side have?

The three sides agree on two major points: A new venue needs to be built to replace 48-year-old Highmark Stadium, and both the Bills and the government need to help pay for it. But the sticking points are complicated.

"I think the Bills are very set on Orchard Park," Higgins said in his first extended comments on the stadium issue.

Car crashes, fires, fights, criminal mischief, intoxication and counterfeit NFL merchandise — it was a busy Sunday afternoon for Orchard Park Police, who responded to more than 100 calls before, during and after the Buffalo Bills football game at New Era Field. Officers and EMS personnel also were kept “very busy” responding to medical calls, the result mostly of