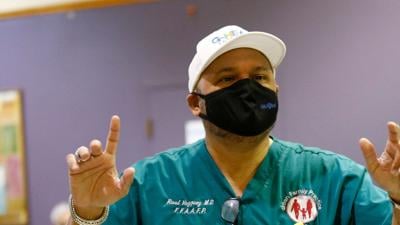 The line out the door is 75 people deep. Inside the building that houses Native American Community Services of Erie and Niagara Counties, social distancing is tricky. It’s too packed with people getting their second shot of the Pfizer vaccine.

On this Saturday morning in March, 360 people are convening in shifts at this vaccine clinic for members of the Seneca Nation community. Indigenous people have been among the hardest hit by the Covid-19 pandemic, which punctuates the life-saving potential of every shot received.

Dr. Raul Vazquez, the physician overseeing this pop-up clinic – temporary vaccination centers that serve a specific community – steps to a microphone positioned in front of a set of 22 chairs.

“I want to ask you all a favor,” Vazquez says to the crowd, who have been asked to wait for 15 minutes of observation in case of immediate side effects. “When you leave here, please share this on social media.”

After a year of a ravaging virus, Vazquez wants to see a different type of spread: He wants the desire – the excitement – over vaccination to become contagious, especially among populations of people who anchor their wariness in a history that is cruel and racist, dating to the decadeslong Tuskegee syphilis study that originated in the 1930s and a 1970s program in which physicians may have sterilized at least one of every four Native American women of childbearing age.

But trust is not the only issue. Access is a problem, even for Vazquez who, through his company G-Health Enterprises, oversees a vast medical network.

“I’ve got 15,000 people, and they’re Black and brown,” he says after setting down the microphone. He's leaning against a wall, monitoring the observation area.

“I’m doing these pop-ups,” he continues, “and listen, I don’t mind doing them. It’s important to the community.” But for the most part, the people at these clinics are not his patients. While the clinics serve a specific population or ZIP code – and the vaccines themselves are allocated for that purpose – Vazquez wants to be able to vaccinate his own patients in his offices.

They want it, too. But on this day, he can't make it happen for them. He doesn't have the doses – yet.

'Let's get the shots'

On that weekend morning last month, a conversation was clawing at Vazquez's mind. Days earlier in Vazquez's office at Urban Family Practice, a G-Health affiliate that has East Side and West Side locations, one of his patients asked for a vaccine. That's normal; Vazquez’s office phone rings regularly with people calling for vaccination appointments. But this woman, a longtime patient whom he treats personally, made it personal. When Vazquez told her the truth – despite asking the state for weeks, his private practice hadn’t been allocated vaccines – she responded, “That’s not right, doc. You know I’m sick. I’ve been with you for all these years. You’re out there giving other people shots, and I can’t get a simple, damn shot.”

It hurt. And it was true.

"Everybody’s talking about ‘have equity,’ " Vazquez said, reflecting on that early March conversation, "but let’s get the shots."

For months, Vazquez had been asking the state for vaccines for his private practice.

That would begin to change.

This candid exchange with his patient, plus the stream of incoming calls from other patients pleading for vaccines, kindled Vazquez’s frustration. He became a doctor so that he could do better for underserved communities. Growing up in the Bronx, he saw health disparities up close when his uncle, who suffered from asthma, struggled to get clear, helpful and direct treatment. Vazquez, who came to Western New York to attend medical school at the University at Buffalo, made it his mission to do better.

He opened Urban Family Practice in 1996 and, over the decades, built a large and well-branded businesses. Affable and plainspoken, Vazquez, 58, has positioned himself as a trusted figure for delivering health care to underserved populations in Western New York. His image is emblazoned on the side of the truck that serves as Urban Family Practice’s mobile medical clinic.

Vazquez has made it his business to bring health care to people and neighborhoods that often can’t get it. But now, in the midst of a global pandemic that has disproportionately impacted people of color, he couldn’t deliver the thing they want most: a life-saving vaccine.

For all the messaging about vaccinations being a race against virus mutations and further infection, Vazquez has been pushing the people who allocate shots to remember something: “It’s also a race,” he said last month, “where certain races are not in there.”

Vazquez is a member of the Western New York’s vaccine hub advisory, a group that includes health, church and community leaders and advises the state on the allocation of shots. In mid-March, Vazquez told hub committee members he was resigning.

“I wish you luck,” he recalled saying, “but this is not working.”

Dean Seneca, a scientist who is a member of the Seneca Nation and once chased the Ebola virus in Africa as part of his work for the Centers for Disease Control and Prevention, was on the call when Vazquez spoke. It was “bold and to the point,” Seneca said, “and I could tell he has a lot of people depending on him to make life better in our community and city.”

Covid-19 has disproportionately affected people of color. According to CDC numbers, Black and Hispanic/Latino people are hospitalized for Covid-19 at about three times the rate of white people. But for American Indian and Native Alaskan people, that figure jumps to nearly four times the hospitalization rate of whites. That’s the official data, but the actual hospitalization and death numbers for native communities is “severely undercounted and probably much worse in Indian Country,” said Seneca, who is the executive director of Seneca Scientific Solutions and teaches a course called Indigenous Health Disparities at the University at Buffalo School of Public Health. He said many states don’t include data on American Indians. “We’d be considered under ‘Other,’ " he said.

The pandemic’s impact on the Seneca Nation is sweeping. Casinos operating under capacity “has definitely had a toll on our economic positioning,” said J.C. Seneca, owner of Native Pride Travel Plaza on the Tallchief Territory in Irving and Dean Seneca’s cousin. He also pointed out that many families live “under one roof.”

“Somebody gets infected with the virus and spreads through their family under that household,” said J.C. Seneca. “We've lost many people,” he said. “Elders have died, even younger folks, in their 50s, have died from Covid-19. It’s a hard thing to fathom. This disease has taken such a toll on the world.”

J.C. Seneca recently hosted an hourlong roundtable discussion on vaccination at Native Pride. The panel included elders who were vaccinated, others who weren’t, younger people who were hesitant. Vazquez came and answered questions: What’s in it? How is it going to affect me? Will it affect my ability to have children? Or to breastfeed?

“It was really good,” said Seneca, who is partnering with Vazquez to host an April 7 vaccination pop-up at Native Pride. “At the end of the discussion, the younger people who were saying, ‘Well, I'm not going to get it,’ their minds were changing. They were more comfortable hearing the doctor explain what the vaccine is about.”

A change for the better

It’s the first week of April, and Vazquez is feeling better about the numbers.

Long before the public started becoming aware of coronavirus testing percentages and vaccination figures – before Covid-19 even existed – Vazquez obsessively compiled and calculated data. He’s not just a doctor; he’s a businessman, too, and he operates on charts and graphs. On this evening of April 1, he shares one that makes him proud: Urban Family Practice has vaccinated 2,808 people and administered just over 4,000 shots. Factoring in the one-shot Johnson & Johnson vaccine and two-dose Moderna and Pfizer vaccines, 48% of the people his office has vaccinated now have full protection. Within a few weeks, so will the other half, and if Vazquez gets his way, the overall numbers will grow, too.

By late March, vaccine allocations began arriving at Vazquez's office. The state sent more than 200 doses. A county official offered another 200. The state then provided several hundred more over the next week.

“ They’ve been flooding me with shots,” says Vazquez, who decided to stay on the vaccine hub advisory committee. He hopes to soon request – and receive – a thousand vaccines each week. That will help him raise his current rate of vaccination – 130-150 does a day – close to 250 daily.

“We still have a way to go,” Vazquez says. “I’m just trying to do the right thing.”

He has thousands of people to vaccinate, and this is a step.

“I feel like I can breathe,” Vazquez says. “I can start giving people shots.”

Waiting for their turn

Eager to get his shot

Eager to get vaccinated

One of the first of the day

Those who are vaccinated

Back at work: A Covid patient's long journey back to teaching

After more than three months battling Covid-19, Valerie Brown is back at work – and couldn't be happier to be there.

Pandemic Lessons: We all agree on something big, so why are we still divided?

In this Pandemic Lessons, we dig into the reasons why people can come together on a major belief, but handle it in entirely different ways. 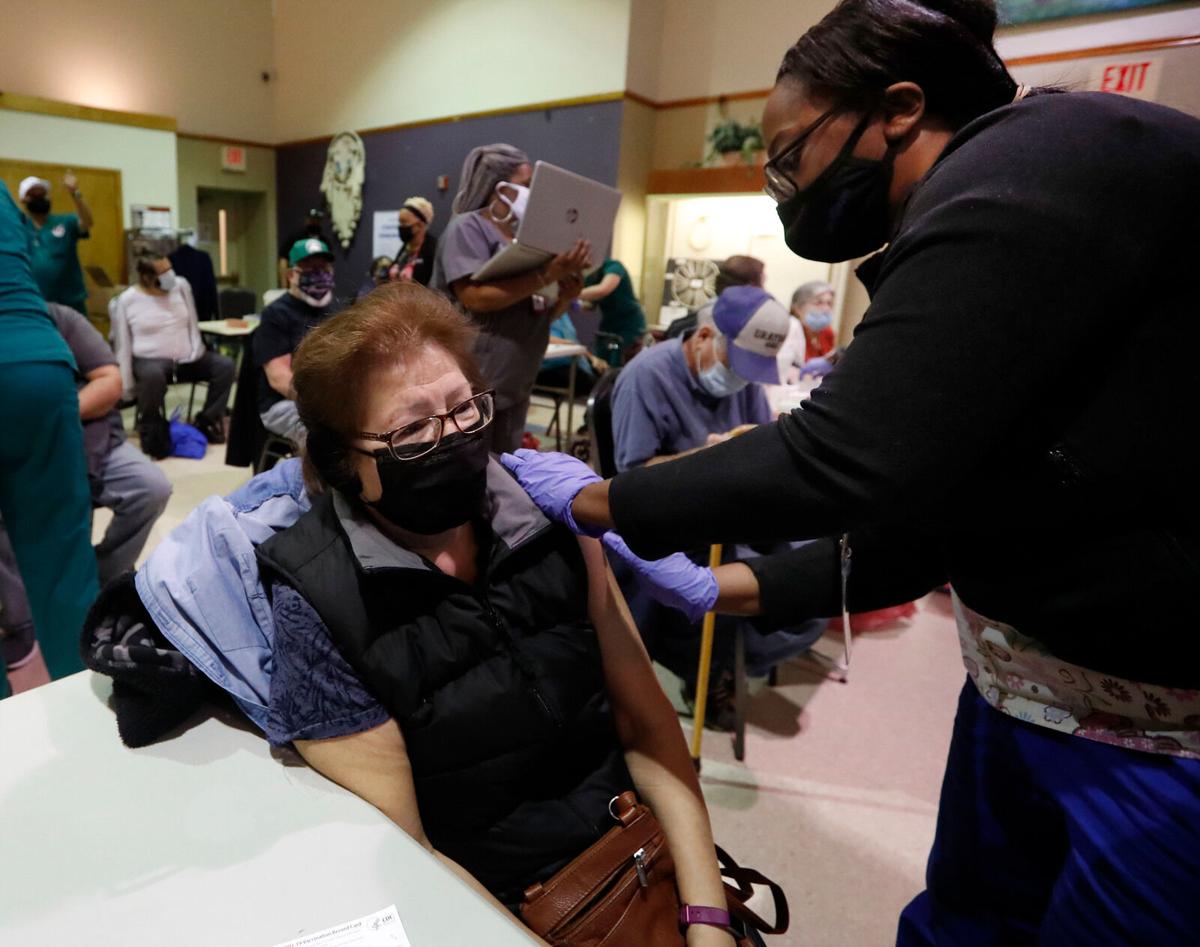 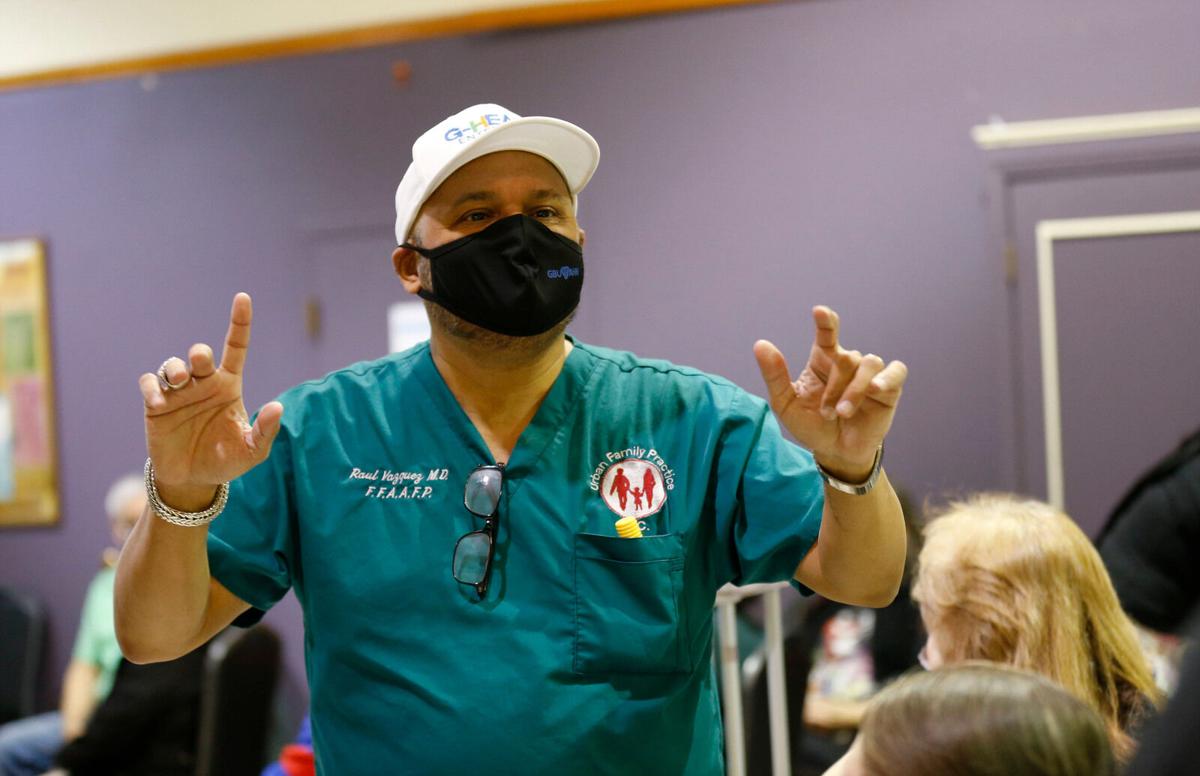 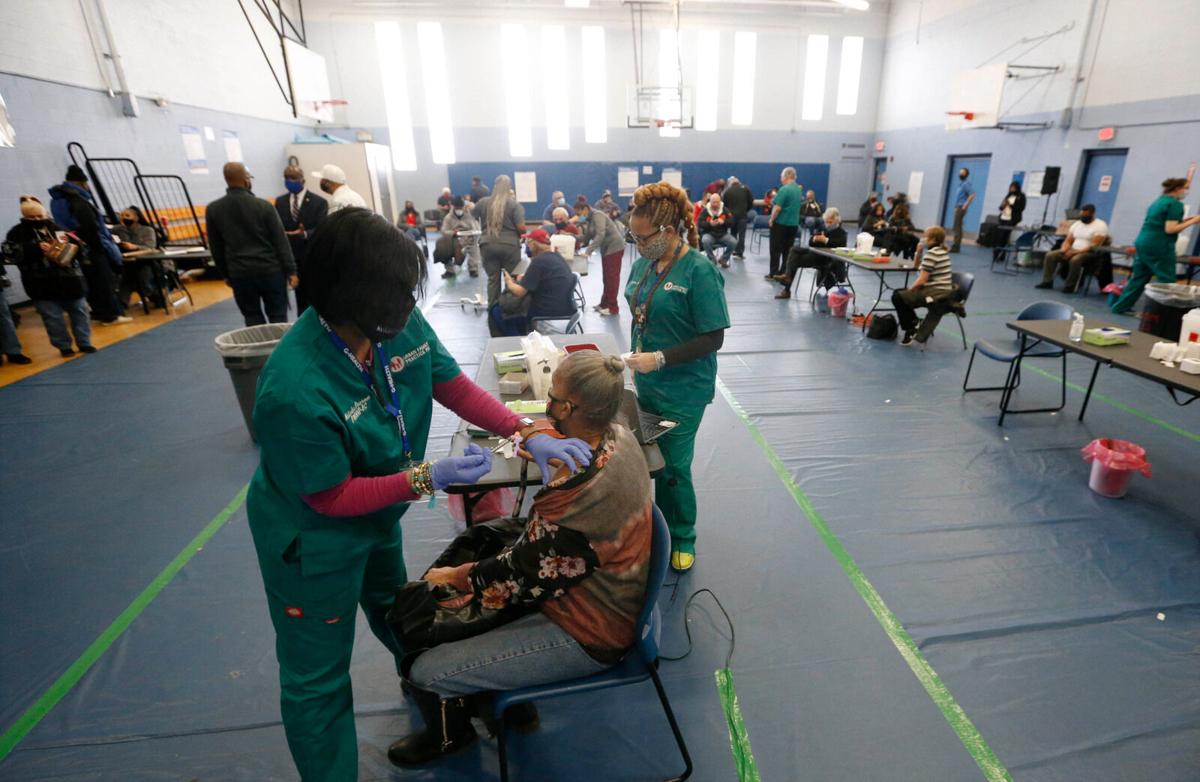 Urban Family Practice gives the second round of the Pfizer vaccine at the Belle Center on Buffalo's West Side, Thursday, Feb. 25, 2021. 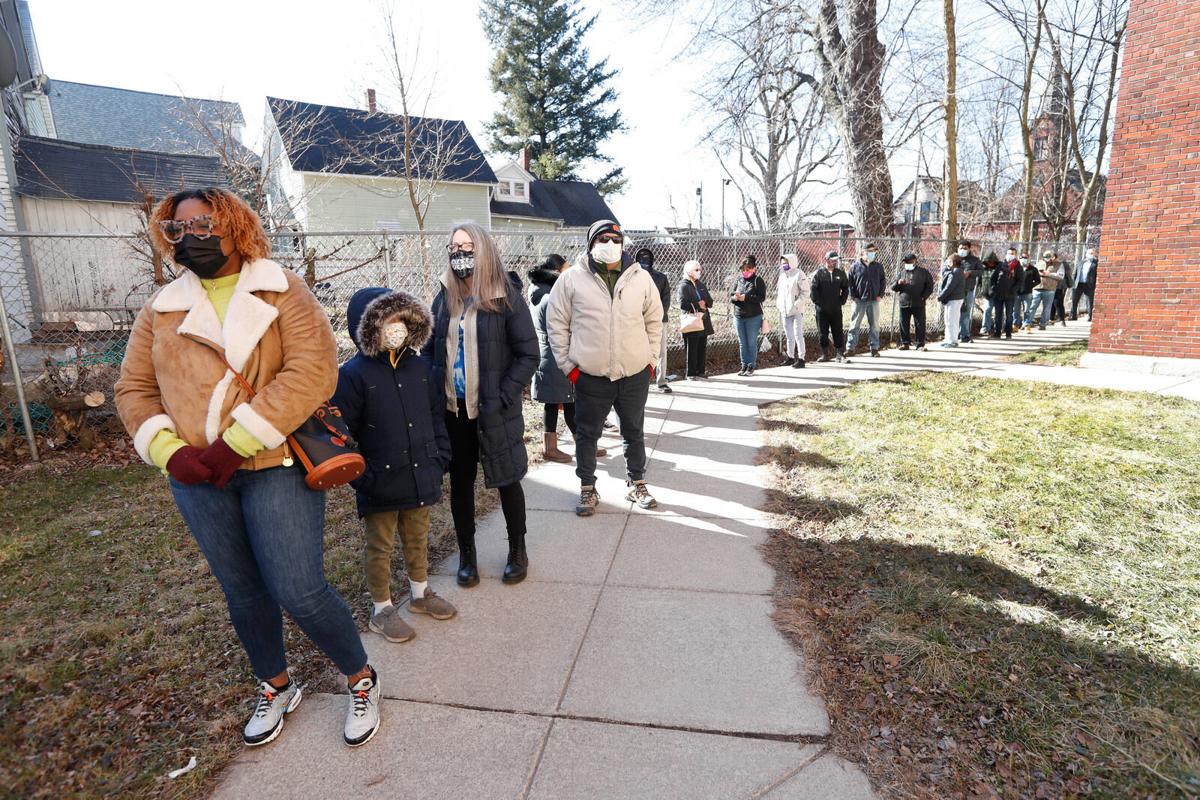 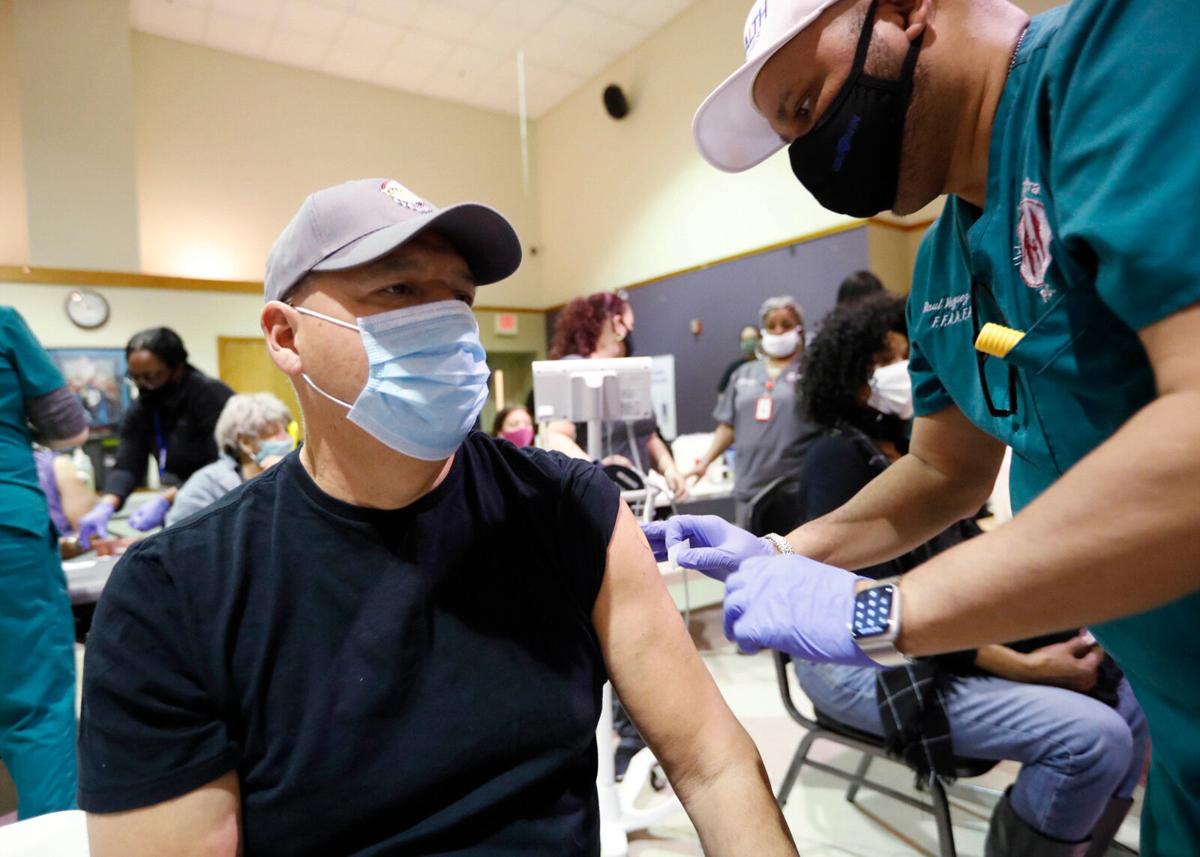 Dr. Raul Vazquez, president and CEO of Urban Family Practice, vaccinates JC Seneca, during a Covic-19 vaccine clinic in March at the Native American Community Center in Buffalo. Leading doctors in the region urge those who are eligible to get Covid-19 and flu vaccines to do so as a way to help themselves as well as children who cannot receive them. 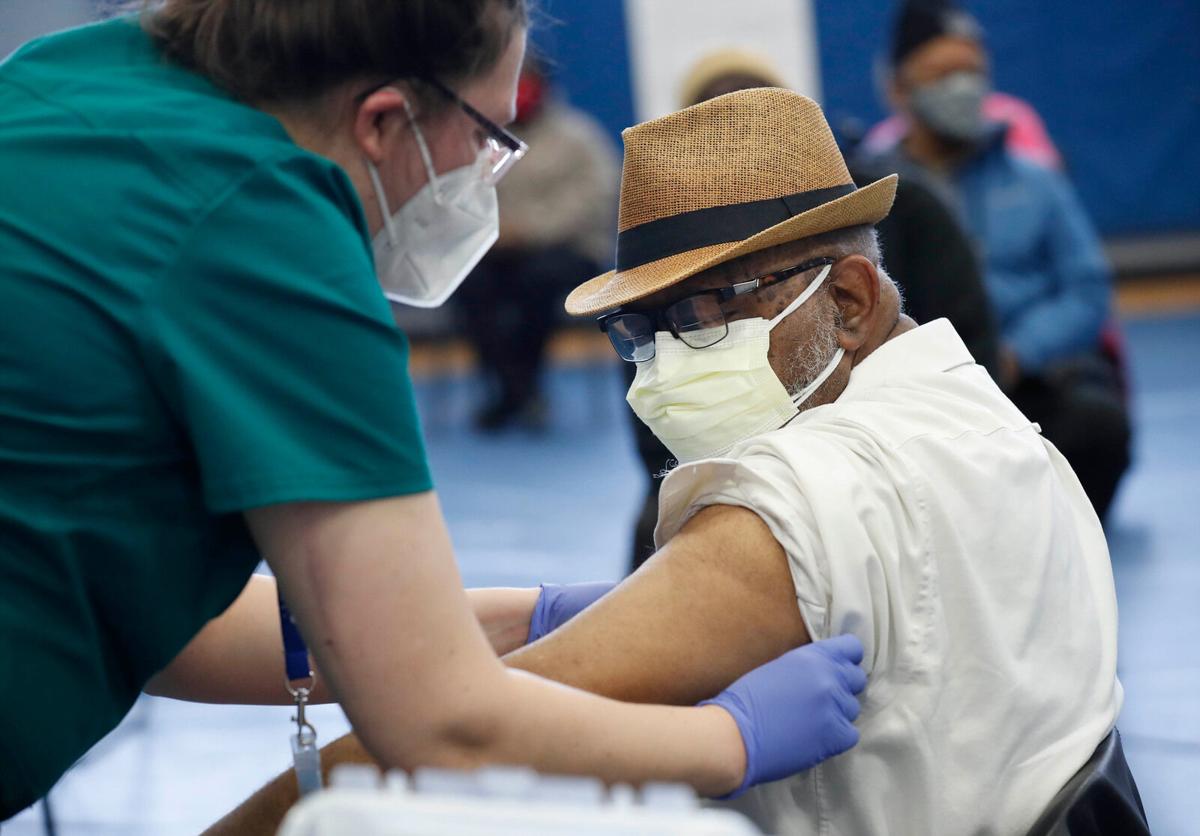 Nurse Practitioner Emily McKeen, with Urban Family Practice, prepares to give the second dose of Covid-19 vaccine to George Grant in February at the Belle Center on the West Side of Buffalo.