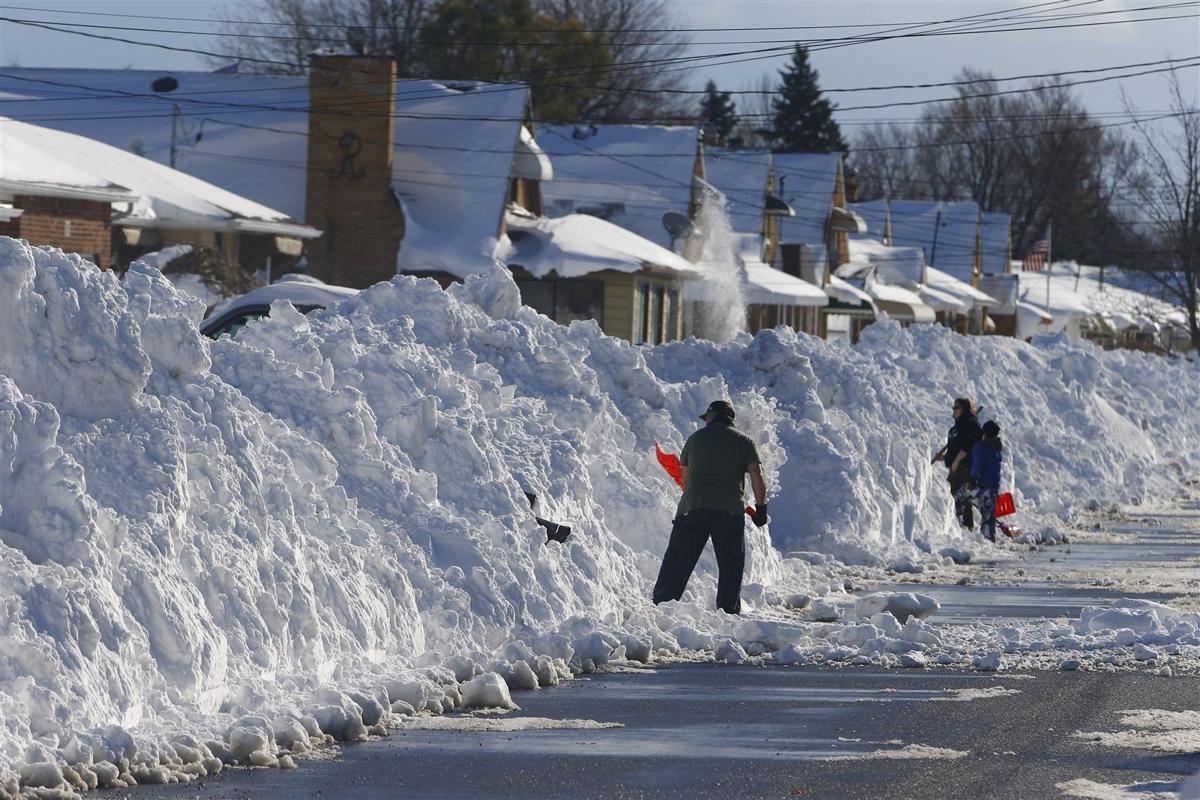 Residents dig out to the street on Collins Road in West Seneca on Friday November 21, 2014. (John Hickey/Buffalo News) 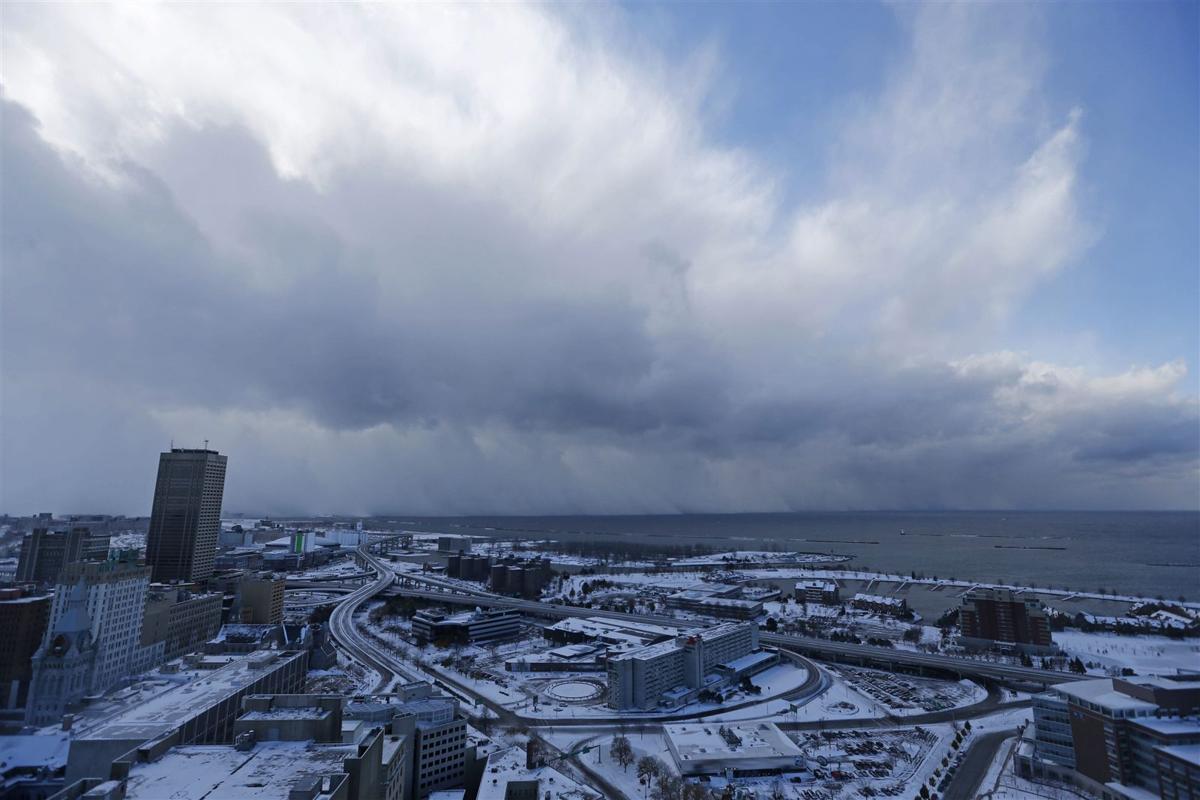 Sucking up water from Lake Erie, the lake-effect snow band moves through the southtowns, as seen from the observation deck at City Hall, Tuesday, Nov. 18, 2014. (Derek Gee/Buffalo News)

All of that snow that fell during November 2014's twin lake-effect storms amounted to about 210 billion gallons of water.

Nearly all of the moisture was sucked up from the surface of Lake Erie, transformed into clouds and dumped in the form of 7 feet of snow across the Buffalo Niagara region.

The storm lowered the lake level by 1.22 inches.

Scientists know this because of their 1½ years of research at the University at Michigan, the Cooperative Institute for Great Lakes Research, Great Lakes Environmental Research Laboratory, Environment and Climate Change Canada among others.

The trick now is better predicting colossal lake-effect storms before they develop.

A state-of-the-art sensor called a sonic anemometer may play a role in such forecasts, according to the Great Lakes researchers. They used data from two such sensors – stationed in Toledo and Long Point, Ont. – to develop a profile of the November 2014 storms. They did so by analyzing atmospheric moisture and evaporation from Lake Erie and how the heat transfer between the lake and the air fueled the the massive storm.

The storm crippled parts of the region for a week and resulted in at least 13 deaths.

The study is one of the first scientific attempts to quantify details about how the atmosphere uses heat and moisture to rob the lake of its water and turn it into snow, and also what conditions – wind, waves and temperature – most contribute to brewing up a big storm.

“These are the first times that anybody has put these kinds of sensor suites on the Great Lakes," said Christopher Spence of Environment and Climate Change Canada. “It can provide the volume of water that’s leaving the lake and going into the atmosphere."

Spence co-wrote a paper on the topic that is scheduled for publication in the American Meteorological Society's Journal of Hydrometeorology.

Experts said the data will be used to fine-tune computer forecast models.

That could help them better anticipate when dangerous lake-effect snow bands will set up, where and how intense they’ll be and how long they’ll last.

“When a couple of miles matter, the fine tuning matters a lot,” said Greg Mann, science operations officer at the National Weather Service in Detroit. “It should allow us to better characterize the event.”

Researchers picked Buffalo’s record-breaking double-storm from November 2014 because it provided the best case study for evaluating how new computer models forecast lake-effect storms and verifying how effective those models were in using pre-programmed variables to forecast storms.

“It was the largest (lake-effect snowstorm) since 1945,” said Ayumi Fujisaki-Manome, a lead researcher from the University of Michigan. “It stuck out.”

It’s exactly the type of storm forecasters want to better predict and be prepared for in the future.

Niziol said one of the biggest challenges forecasters face is predicting snowfall rates.

And, when they’re trying to pin down a storm like November 2014 with snowfall rates of 3, 4 or even 5 inches an hour, precision is key.

“A slight change in that temperature structure in the lower atmosphere could very easily double that snowfall,” Niziol said. “If that snowfall rate is double over an 8-hour period, you’re talking about 3 feet of snow.”

Arctic air is very dry, so to create snow, a storm needs to add heat.

That’s where the lakes come in.

In November 2014, a deep pool of frigid Arctic air ripened itself over the western Great Lakes, like Lake Michigan.

Then, it rushed toward Buffalo from the southwest, across Indiana and western Ohio before jumping onto Lake Erie’s 271-mile straightaway.

Along the way, it found its heat source.

The surface of the lake’s 48-degree water started to warm the air above it, destabilizing the atmospheric column.

The stark temperature difference between the water and the air increased the rate of evaporation. Winds kicked up waves and spray from the water adding to it.

“It pulls the heat from the lake to the air,” Fujisaki-Manome said. “The air warms up. It holds more moisture and begins to lift.”

The surface of the lake’s waters were literally vaporized and lifted up. That water vapor rose and rose and rose, forming clouds – a wall of clouds.

The wall of clouds grew 3 miles high and, guided by a southwest wind, the wall was driven into the heart of Western New York.

There, the clouds emptied themselves over several days in feet of snow.

Researchers are now looking into whether other dynamics – like off-shore winds – helped to pool the warmer lake waters under the massive snow band, further strengthening and fueling the storm like a hurricane might feed itself over warm-tropical waters.

They hope to learn what keeps an intense lake-effect snow band in a "steady state" and able to churn out more and more snow for days at a time.

There's hope the sonic anemometers’ ability to track heat transfer may help crack those mysteries, too.

“Sometimes, forecasting is a little bit of sleuthing,” Mann said. “Any little fingerprint can be useful.”

Computer models are already programmed to simulate the heat transfer between the lake and the air using temperature, humidity, wind direction, atmospheric pressure and surface conditions, but the sonic anemometers measure it directly.

“These computer models have to make some assumptions on that data,” Niziol said.

The data crunched by the study’s researchers is now being used to gauge how effective the models were at simulating the transfer of heat.

“This study appears to be the first to attempt to quantify that,” said Jon Hitchcock, a meteorologist at the National Weather Service in Buffalo.

Now, the focus will turn to adjusting those forecast models – “fine tuning” them, as Mann put it – to make them more precise, and forecasts more accurate.

Data from sonic anemometers is still relatively new to the Great Lakes.

The devices were first set up on a trial basis on Lake Superior in 2008. Later, other lakes got them, like on Lake Erie in 2012.

The devices are next planned to be affixed to vessels traveling the lakes under a pilot project though Environment and Climate Change Canada.

Can the sonic anemometer improve the accuracy of lake-effect forecasting?

“It should,” Spence said.

Along with higher and higher resolution 3-D pictures of the atmosphere, devices measuring the transfer of heat between the water and air is another tool that can be used to improve forecasting lake-effect snowstorms.

“From each one of these research efforts, you glean just a little more information.” Niziol said. “Small baby steps can eventually lead to a bigger step.”

When Niziol started his career at the Buffalo office of the National Weather Service about three decades ago, models didn’t even recognize the Great Lakes on the map.

“The best computer models at that time didn’t even predict a lake-effect snow band,” Niziol said.

Forecasters relied on their local knowledge to predict when a big storm loomed off-shore.

In some ways, they still do.

"Even with all the advances in model guidance and atmospheric measurements, the most important resource is still humans," Hitchcock said.

Hitchcock pointed out that technological advances are great tools, but they remain prone to error.

"Forecasters use our vast experience and pattern recognition to improve on model forecasts, and produce a more accurate forecast than any model can produce for lake-effect snow," Hitchcock said.

Residents dig out to the street on Collins Road in West Seneca on Friday November 21, 2014. (John Hickey/Buffalo News)

Sucking up water from Lake Erie, the lake-effect snow band moves through the southtowns, as seen from the observation deck at City Hall, Tuesday, Nov. 18, 2014. (Derek Gee/Buffalo News)