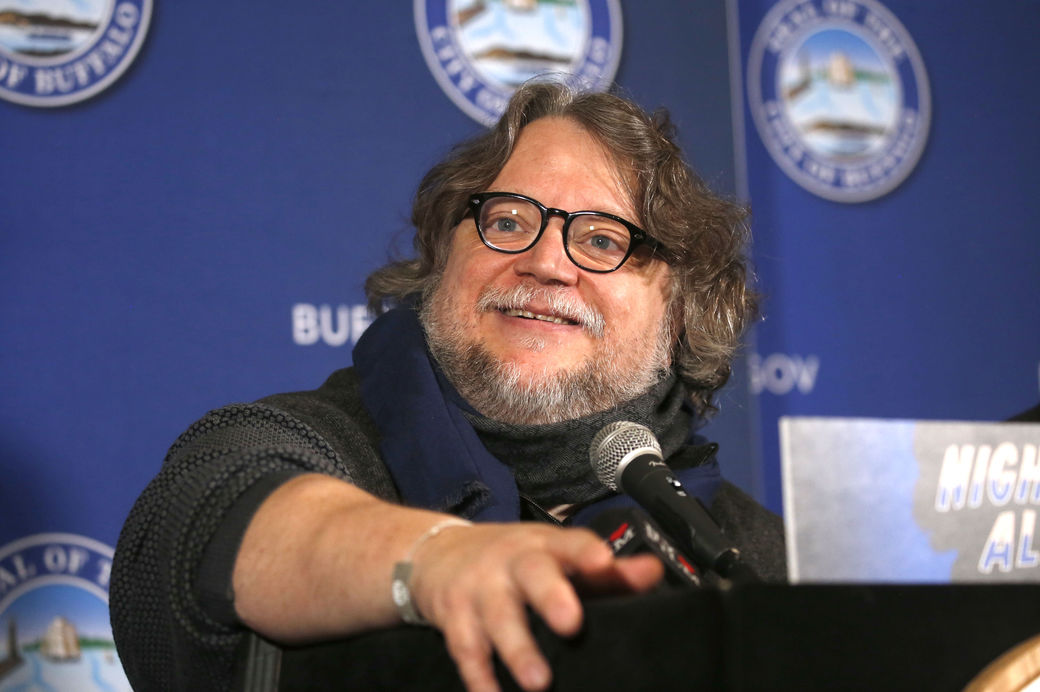 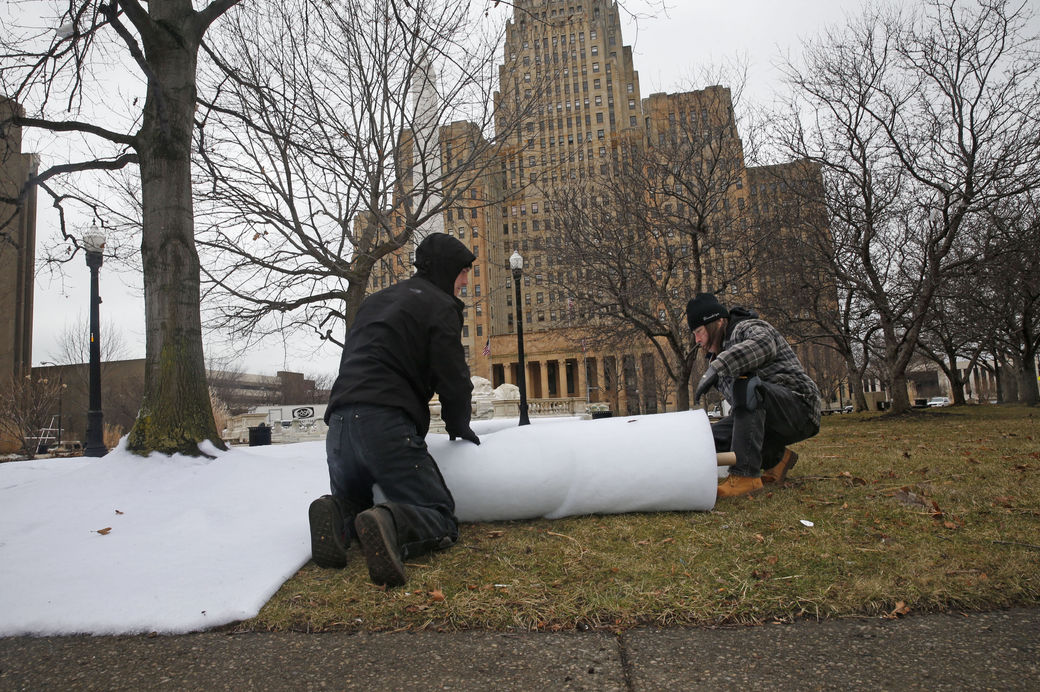 A major Hollywood director has once again come to Buffalo, lured by the architecture, the people and its growing reputation for hospitality to filmmakers.

But Guillermo del Toro never would have guessed that he would have to bring with him the one thing he thought would be waiting for him here: snow.

"It's like bringing tacos to Mexico," del Toro said during a news conference Tuesday afternoon to bring attention to the production of his film "Nightmare Alley" this week in Buffalo.

“Nightmare Alley" is a loose remake of a 1947 film noir starring Tyrone Power and Joan Blondell. The bulk of the production is filming in Toronto, but the crew is shooting in Buffalo to take advantage of the city's historic architecture needed for the film's 1940s setting, including Niagara Square and its surrounding buildings such as City Hall (built from 1929-31), Walter J. Mahoney State Office Building (1928-32) and Michael J. Dillon Memorial United States Courthouse (1935).

While many period films often are made in the same U.S. cities like New York or Los Angeles, del Toro was looking for something new and called Buffalo "absolutely amazing from an architectural point of view."

"I wanted to find a city that was really interesting to visit for an audience, that was not a city they were overtly familiar with," del Toro said Tuesday, explaining why he picked Buffalo as a site for filming.

Del Toro was welcomed to Buffalo by Mayor Byron Brown and Erie County Executive Mark Poloncarz, who said the director's presence will be noted by other filmmakers.

"This will add to our reputation as a great place to film movies," Brown said.

That reputation seems to be spreading. The film "A Quiet Place Part II," scheduled to premiere March 20, used several locations in Erie and Niagara counties. In recent years, other films shot here have included "Marshall," "Teenage Mutant Ninja Turtles: Out of the Shadows" and "Cold Brook" from actor and former Cheektowaga resident William Fichtner.

The exact scenes to be filmed here for "Nightmare Alley" are unknown, but stars Bradley Cooper and Rooney Mara are said to be involved in the Buffalo filming. The cast also includes Cate Blanchett, Ron Perlman, Richard Jenkins, Toni Collette, Willem Dafoe and David Strathairn.

Niagara Square and City Hall are expected to play prominent roles in the film. The historic traffic circle and gathering place for such popular events as Taste of Buffalo will be shut down to traffic on Thursday as it takes its place in the spotlight of "Nightmare Alley."

From 11 a.m. to 11 p.m. on Thursday, all traffic in the Niagara Square area, including NFTA buses, will be diverted when snow, vintage cars and extras in 1940s wardrobe will fill the square.

Here are the specific street closures:

Much of the activity related to the film Tuesday was happening in and around Niagara Square. It just wasn't exactly what the crew expected to be doing at this time of year.

Some of the film occurs in winter, which also was part of the appeal of being in the northeast. The special effects crew for the film last visited Buffalo in December for a scouting trip. It was a whiteout, with 4 inches of snow on the ground, which crew members thought would bode well for their schedule.

Buffalo. February. Do the math.

But a winter warmup left the grounds of Niagara Square, the location of a key scene to be shot on Thursday, snow-free on Tuesday, with green grass, clear roads and sidewalks very far from slippery.

"Never, in my wildest dreams!" was how Mike Myers of Brooklyn, owner of special effects company NYSPFX, described his belief that snow would be in short supply.

That's why special effects coordinator Geoff Hill was driving into Niagara Square with a pickup truck full of snow he found in a nearby parking lot, which he and other workers shoveled along the sidewalk across from City Hall. Other crew members pinned down a "snow blanket," a thin, layer of the fluffy material that goes into couch cushions, over grassy areas.

And perhaps the ultimate indignity: A truckload of snow is being imported from ... New York City.

Myers said the snow is brought in because of certain equipment that transforms blocks of ice into a very fine grade of snow.

When used for a scene, Myers said, "it will look, around the perimeter, like a snowplow came by."

Since that December trip, Myers has been obsessively tracking the Buffalo weather, even checking webcams.

"I would see it, and it looks great, and then in two days, it would be completely gone," he said.

For the time being, the crew has taken to searching surrounding areas for snow piles to transfer to Niagara Square, as Hill did.

He said he was driving to the train station and found a lot, then moved it all into the truck himself.

"I shoveled it. That's the Canadian way right there."

As Buffalo's Jim Kerr and Randy Krautsack pounded 6-inch spikes into the turf to hold down the "snow blanket" material on the east side of Niagara Square, they heard plenty of comments from Western New Yorkers driving by.

"That's the worst snow I've ever seen!" yelled one.

Myers knows snow is in the forecast for Thursday, but regardless, he will be ready.

"I'm taking absolutely full credit for any snow that lands on our set on Thursday," Myers said. "Real snow or fake snow, it's all us."

Del Toro will be shooting four days in Buffalo. "Nightmare Alley" is the first film he has directed since he won best director and best film for his poetic horror romance “The Shape of Water," which had a Buffalo connection: local collector Michael Meriso and his CooCooU27 supplied vintage pieces for the film including a dining room set, industrial lighting fixtures from Buffalo factories and an assortment of vintage cocktail shakers.

His previous movies include the 2015 Gothic romance "Crimson Peak" that is set "in Buffalo, N.Y." (really Kingston, Ont.) before the story moves to Victorian England; "Pan's Labyrinth," "Pacific Rim" and "Hellboy" (2004) and its sequel.

Del Toro has been in Buffalo multiple times since last summer scouting location. The director engaged with fans on Twitter, talking Buffalo food (“Had beef on weck and wings last night at 'The Place.' ”) and asking for suggestions on bookstores, indie comic shops and more for his return.

The mayor noted that del Toro has hired more than 200 local people to help in the shooting of the movie.

When asked if he would come back to make another film in Buffalo, del Toro's response was a quick: "100%."

"The great thing about it is, unprompted, I’ve always been fascinated by the city," del Toro said about Buffalo. "It is true that every day that I’m here, I fall more and more in love with it."

“A Royal Christmas Engagement” was filmed throughout Buffalo and East Aurora at such locations as WNED Studios and along Main Street in East Aurora.