The Erie Canalway Trail was more popular than ever last year, and nowhere more than in the City of Tonawanda.

A report issued Monday said that more than 300,000 visits were made to the trail in Niawanda Park, along the Niagara River just south of the canal.

That's an all-time record for any single year at any particular point on the trail, said Dylan Carey, spokesman for Parks & Trails New York, which compiled the report.

Unlike most of the 38 counting points on the 360-mile trail from Buffalo to Albany, where an estimation formula is used, Parks & Trails has an electronic counter in Niawanda Park, so the numbers are solid, Carey said.

And so were the numbers across Niagara Street from the park at two popular eateries, Old Man River and Mississippi Mudds.

To be sure, 2020 was a pandemic year, and an especially bad one for restaurants saddled with Gov. Andrew M. Cuomo's orders for shutdowns and capacity limits.

But Tony Berrafato, who owns both Tonawanda restaurants, said he could tell things went better there than at other places away from the water and the trail.

Business was down about 25% from 2019 at Old Man River and Mississippi Mudds, Berrafato said. By comparison, business fell 60% from 2019 at his Prima Pizza restaurant in downtown Buffalo.

"Once the crummy spring got through, by mid-May through the summer, the weather was pretty strong with very little rain, so that was a factor," Berrafato said. "People wanted to get outside because of the pandemic. The combination of the two I think helped us overcome the pandemic to a degree – at Mississippi Mudds for sure."

He said Old Man River was hurt because its live music, normally offered four or five nights a week, was banned, and its catering business was crippled, too.

The eateries placed tables and chairs in the park to bolster their outdoor dining offerings, Tonawanda Mayor Rick Davis said.

"The safest thing and the best thing for your mental health is to get outside walking around, biking, rollerblading," Davis said.

He estimated that 500,000 users visited Niawanda Park last year in addition to the trail users.

"So many people had such limited opportunities for other things, so they went outdoors," Carey said. "They took trips on the Canalway Trail and visited parks. You saw the same thing with State Parks, which saw a visitation record last year."

Carey said the report shows the trail is more attractive than it's ever been to bicyclists, walkers and runners.

"We were thrilled to see the results. We had so many anecdotal experiences about how busy trails were all year," Carey said. "It's a great recreational resource for the whole state."

Most of the canal trail has been completed, although there are still a couple of stretches in Amherst where the trail shares a roadway, Carey said.

"I think if you saw that continuously off-road, you'd see the use in Amherst rival the use that you have in Tonawanda," Carey said. "As soon as the weather warms up, you're going to see the trails get busy again."

"The Canal Corp. was proud to complete several trail projects in 2020, which not only closed gaps along the trail, but also enhanced the overall safety and experience for all trail users," corporation president Brian U. Stratton said in a news release.

Parks & Trails New York is a nonprofit agency that partners with the Canal Corp. to promote the trail system.

Amherst pedestrian bridge to be replaced 14 months after it closed

Crews this weekend plan to replace a pedestrian bridge running along Tonawanda Creek in north Amherst that closed 14 months ago. Town officials in August 2018 shut down the pedestrian bridge that carries the Erie Canalway Trail across Ransom Creek because an engineering consultant determined the span wasn’t safe. Starting Friday, a contractor will remove the existing bridge and

A 2.1-mile gap in the Erie Canalway Trail was closed this year with the construction of a trail along East Canal Road in Pendleton, from Tonawanda Creek to Feigle Road. The completion of the $4.5 million project will be marked with a ceremony at 1:30 p.m. Friday at the Feigle Road trailhead parking lot. The Pendleton segment of the

Few things are as synonymous with summer as a bicycle ride in the sunshine. Slow or fast, fancy or garage-sale find, a bike gives the rider permission to take in the sights and sounds that whir by unnoticed in a car. Whether you’re 5 or 55, now is as good a time as any to start enjoying the world

Biking in Buffalo is hot. Here are ways to get – and stay – rolling

Walking climbed 500% from March through May, bicycle riding ballooned by 3000%, and both activities continue at higher levels, according to the Buffalo Niagara Regional Transportation Council. 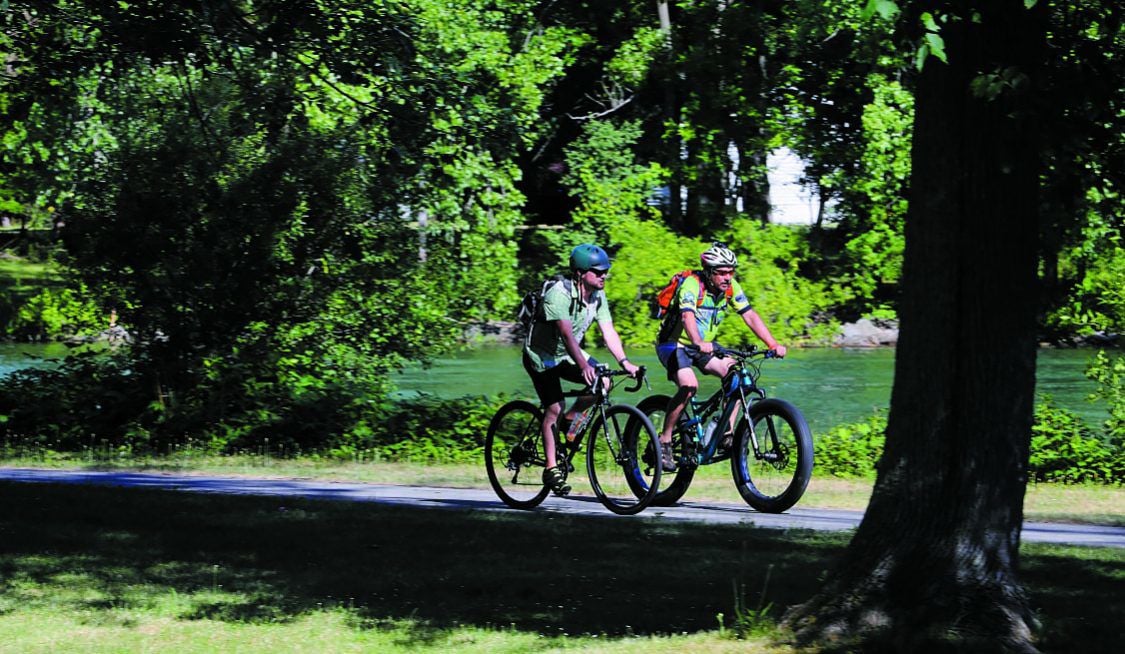 Cyclists travel along the Erie Canalway Trail, which is now nearly complete. 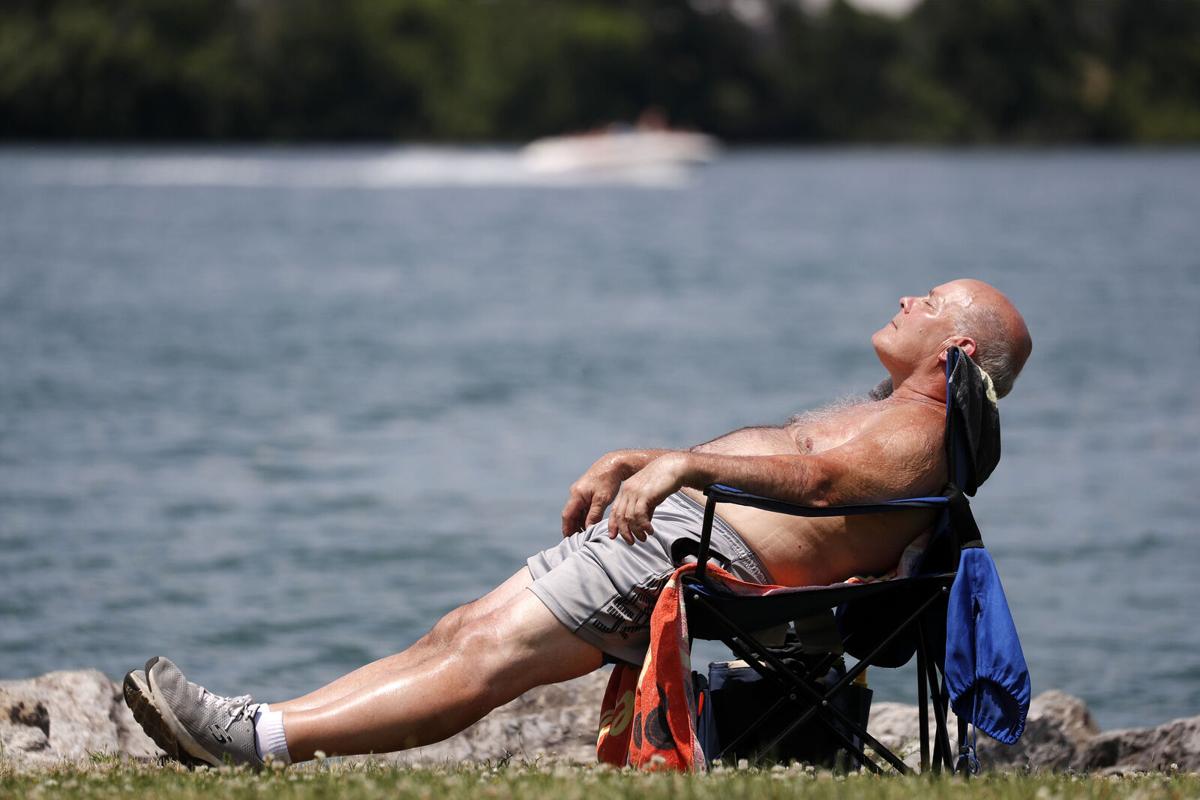 Guy Huber gets some rest next to the cool waters of the Niagara River at Niawanda Park in Tonawanda, Monday, July 6, 2020. 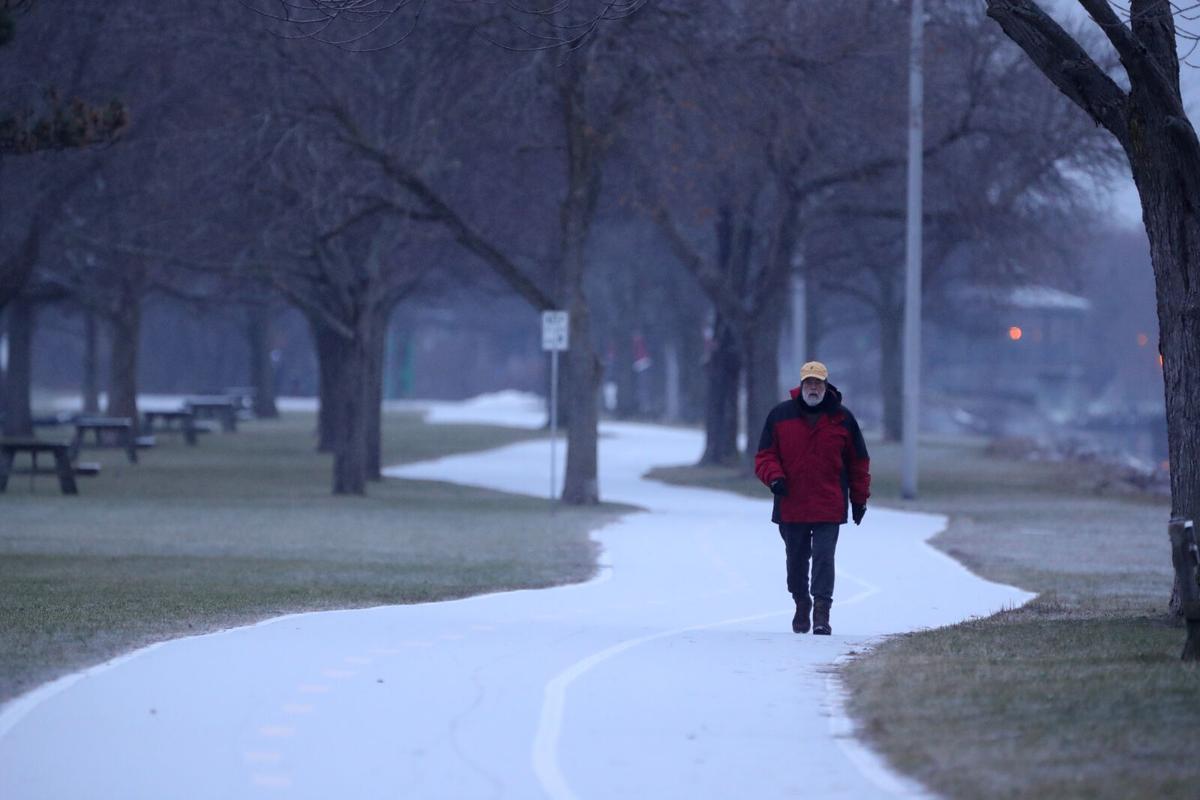 Jaff Bridenbaker of Grand Island walks on shoreline trail at Niawanda Park as a light snow falls in the City of Tonawanda, Monday, Jan. 11, 2021.