In December 2015, state parks officials sent the City of Niagara Falls more than $200,000 to erect a statue of Harriet Tubman, the Black woman credited with leading groups of escaped slaves to freedom in Canada before the Civil War via the the city's old Suspension Bridge.

But the statue has never been built, or even designed, and at the end of last year, the grant expired.

Mayor Robert M. Restaino persuaded Albany to extend the funding for another year, and the City Council is to vote Wednesday on spending $67,000 of Niagara River Greenway funds to cover the local match.

If that happens, Restaino said Friday, the city will have to hire an artist before the end of the year.

"We're trying to get this back on track so we can get the design done and go forward with getting this whole project up and running," the mayor said.

It's the second time the city has run into trouble with plans to erect a statue of a Black abolitionist leader. In 2018, the Council rejected funding for a statue of Frederick Douglass after Black residents objected to the proposed site – in front of Police Headquarters.

In December 2019, then-Mayor Paul A. Dyster asked the Council again to appropriate $280,000 in Greenway funds for the Douglass statue without specifying a site. Again, the Council said no.

Restaino said he wants both statues to be erected, but the Tubman statue will come first.

Thomas J. DeSantis, retired city senior planner, said a request for proposals for the Tubman statue was ready when he left City Hall at the end of 2020, but it has not been issued.

A Tubman statue was part of the original plan for the conversion of the old Custom House into an Amtrak station, which opened in 2016. The Niagara Falls Underground Railroad Heritage Center opened in the building in 2018.

The statue is to be erected in Harriet Tubman Plaza in front of the building, which stands where the American end of the Suspension Bridge used to be.

Dyster said for legal reasons, a Tubman statue couldn't be included as part of the Custom House reconstruction.

DeSantis said the Dyster team envisioned hiring one artist to sculpt both Tubman and Douglass, but the statues were to have different funding sources: one from the state, the other from the Greenway. But the Council wouldn't go along.

Ally Spongr, the Heritage Center's interim director, said the Tubman statue would be a valuable addition.

"This is something we've been hoping for outside of the Heritage Center, and it would be a great asset here in the North End of the city," Spongr said.

"This was conceived of as part of a trail type of experience," Dyster said.

That trail would have included a Freedom Plaza on the state park side of Whirlpool Street; the Tubman statue; and a Douglass statue at Police Headquarters a few blocks up Main Street, or at the old Congregationalist Church on Cleveland Avenue.

Restaino said he likes that site, but the church needs significant repair.

"I don't want to put what I think is a celebrated statue in front of a structure that's not getting the appropriate attention," he said.

Douglass is supposed to have given a speech challenging Christians to embrace abolitionism in that church.

However, Sara Capen, executive director of the Niagara Falls National Heritage Area, said although it's known Douglass visited Niagara Falls, no evidence that he spoke in the church has been found.

"This is a significant project that raises awareness of the remarkable history of the Underground Railroad in Niagara Falls," Capen said. "It's important for people who live in Niagara Falls, to give them a sense of pride, and also for tourism."

Talk about a Tubman statue dates back at least 15 years, when some Niagara Falls officials blew the whistle on Lewiston's plans to depict Tubman in its Freedom Crossing monument. They argued there is no evidence that Tubman ever led slaves across the Niagara River at Lewiston.

Tubman's image was deleted from the Lewiston statue, unveiled in 2009. But sculptor Susan Geissler did engrave the phrase, "Mourn the Rainbow Heart." It's an anagram for: "We honor Harriet Tubman."

Niagara Falls to seek proposals from sculptors for Tubman statue

The City of Niagara Falls will issue a request for proposals from sculptors interested in creating a statue of Harriet Tubman.

The Editorial Board: Late, as usual, but Niagara Falls gets its mind right on Tubman statue

"The failure to produce a statue to the anti-slavery hero Harriet Tubman is unfortunate and but not surprising in Niagara Falls," writes The News' Editorial Board.

A boutique hotel, multi-use buildings and a Niagara University facility are among the projects approved by the state Friday.

Where should Frederick Douglass statue be placed in Niagara Falls?

NIAGARA FALLS — Evidence that Harriet Tubman used a suspension bridge that once spanned the Niagara River has been around for 139 years. In her own words, Tubman described one of her journeys through Niagara Falls to biographer Sarah Hopkins Bradford. It was Tubman’s seventh or eighth trek from Maryland to Canada to bring fugitive slaves to freedom. As

$43 million train station gets ready to open in Niagara Falls

Workers are putting the finishing touches on long-awaited $43 million transportation hub at the base of the Whirlpool Bridge in Niagara Falls, replacing the out-of-the-way Amtrak station off Lockport

The Historical Association of Lewiston has dropped a replica of Harriet Tubman from a life-size bronze monument planned for a riverfront park after leaders in Niagara Falls objected to the use of a historical figure who may never have been in Lewiston. Diane Finkbeiner, the association’s president, said the organization has stepped away from an early clay design for

Harriet Tubman looms large in the story of the Underground Railroad, and New York Power Authority money is likely to make her even more visible in Niagara River communities. But it might not be in a way Tubman would have recognized. The state so far has snubbed a proposal to honor the most popular Underground Railroad conductor by revamping

We can imagine the eyerolls from the other side of the border. St. Catharines, Ont., is prominently featured in the new film “Harriet,” which depicts the life of Harriet Tubman and is gaining lots of Oscar buzz. When Tubman flees to St. Catharines after the Fugitive Slave Act is passed in 1850, an intertitle appears in the film that reads: 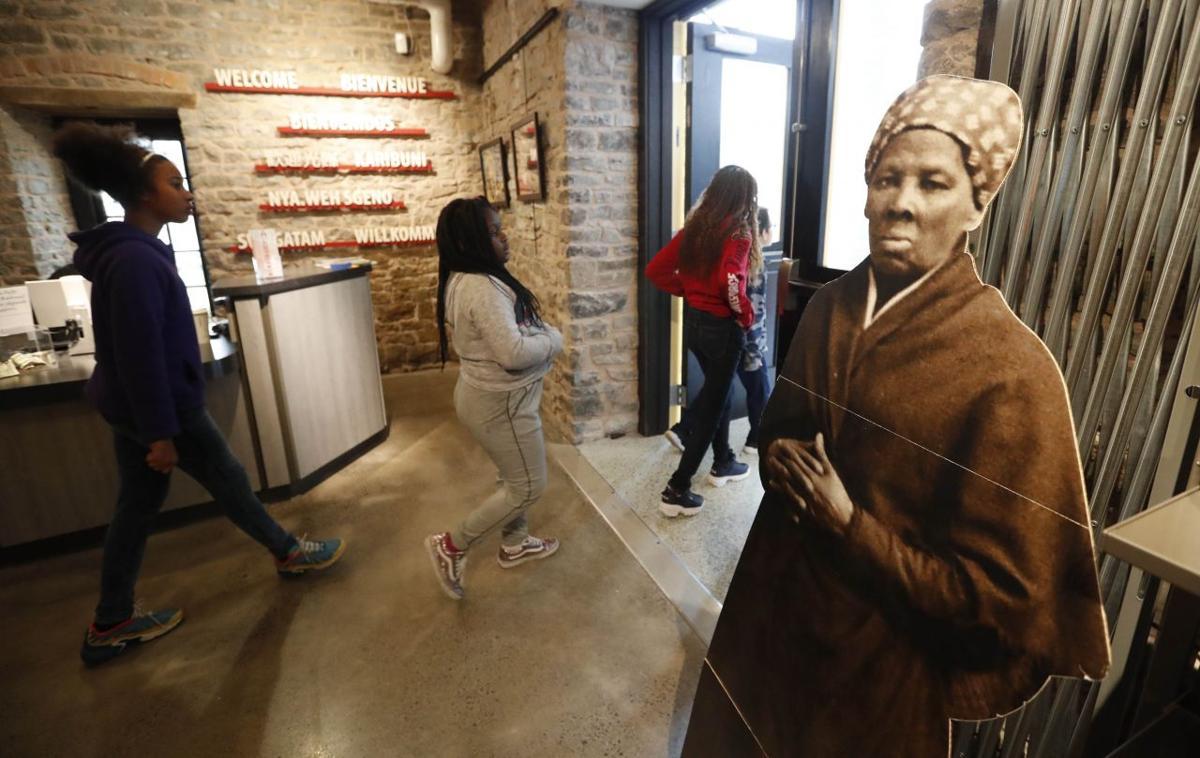 A cutout of Harriet Tubman in the Niagara Falls Underground Railroad Heritage Center. 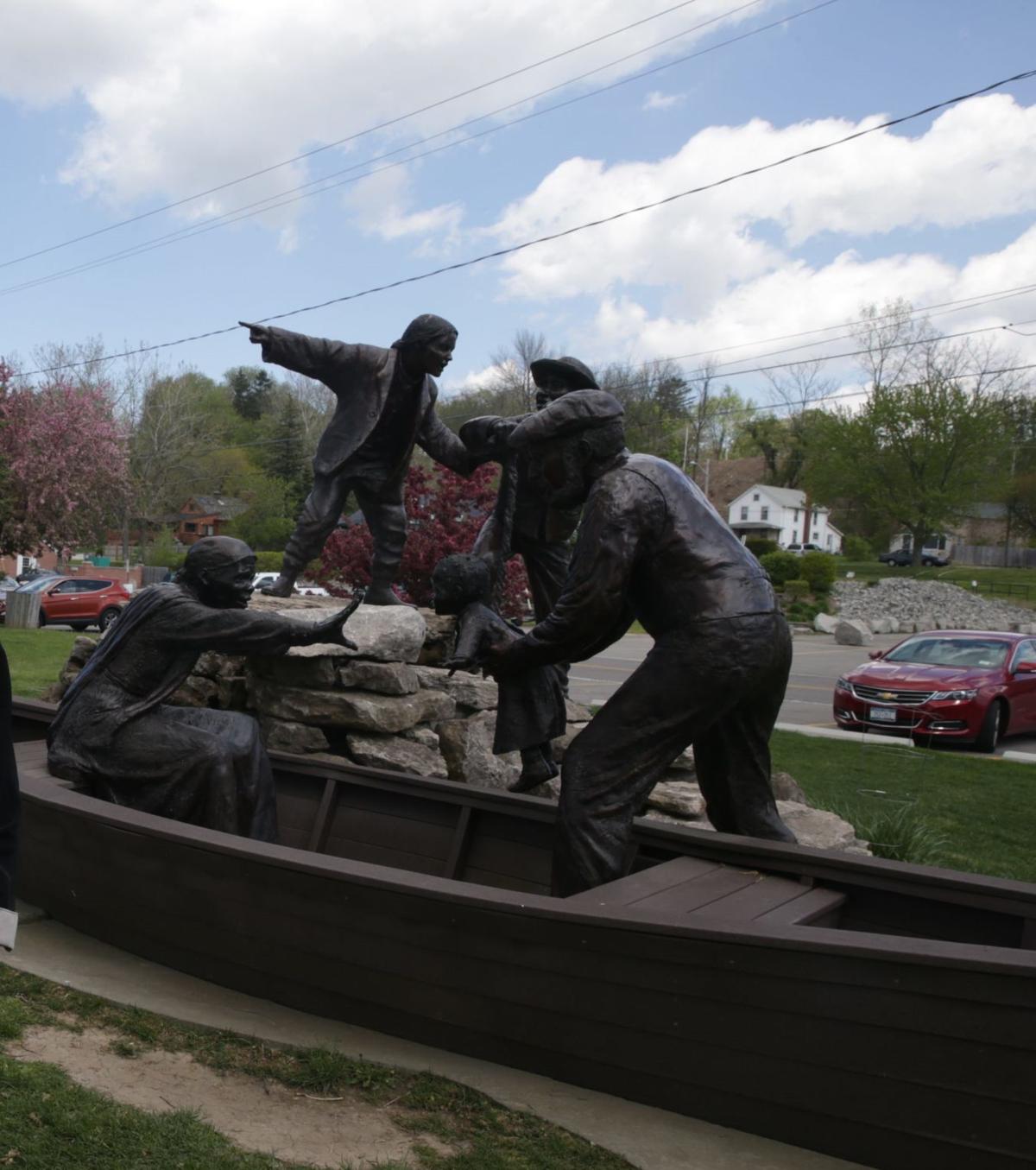 The Freedom Crossing monument is one of the highlights of the Lewiston waterfront, one of the stops on the Discover Niagara Shuttle route. The status, commemorating the Underground Railroad history of the area, stands at Center and Water streets.