A new plan would extend Metro Rail to the University at Buffalo’s North Campus and beyond via Niagara Falls Boulevard instead of Bailey Avenue. (Derek Gee/News file photo) 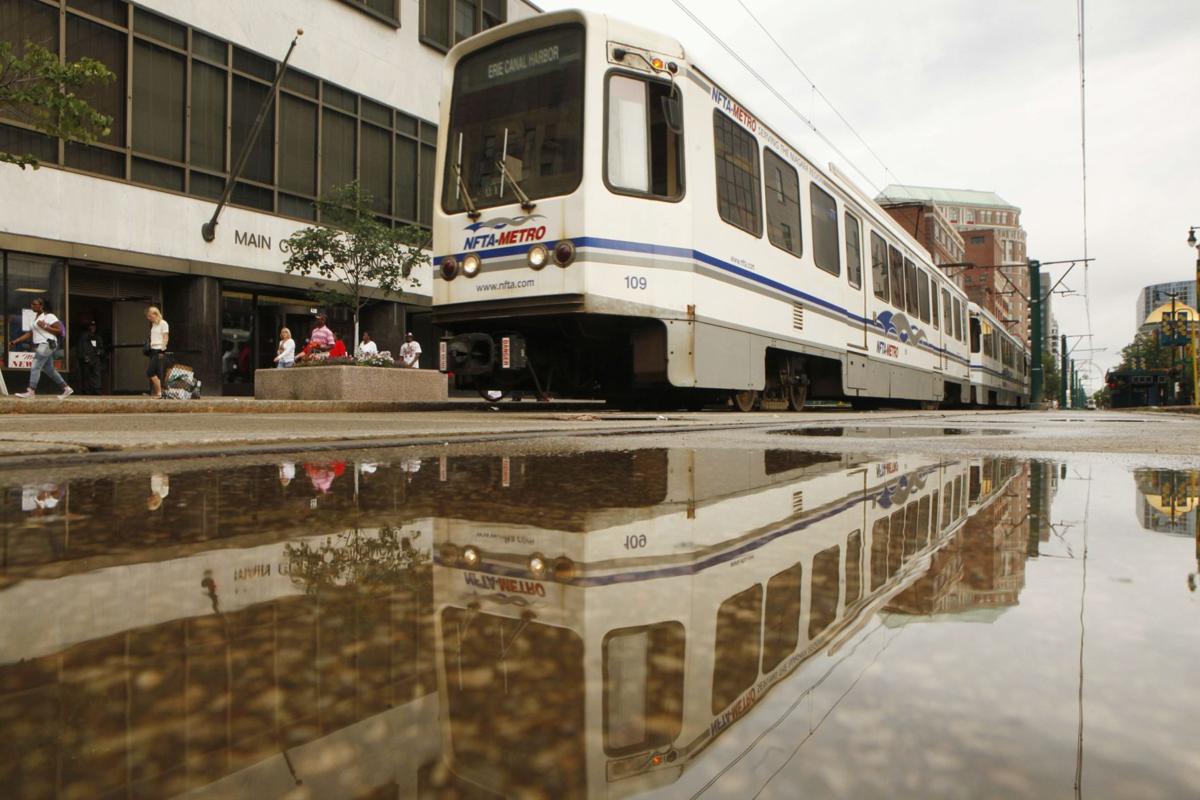 { FOR HABUDA STORY } A metro rail car heading downtown is reflected in a puddle left by overnight rain on Main Street, as much-needed precipitation returns to the area, Thursday, July 26, 2012. {Photo by Derek Gee / Buffalo News}

Tim Wode, and employee of Shea's Buffalo Theatre works on replacing some of the 5,000 bulbs on the marque on Tuesday , September 16, 2008 . . (PHOTO by Harry Scull Jr/The Buffalo News)

Transit planners have made major changes to the route of Metro Rail’s proposed extension to Amherst, hoping to significantly reduce the length of its underground section, expand economic development opportunities and save $200 million.

Niagara Frontier Transportation Authority plans now call for northbound trains to exit University Station directly to Niagara Falls Boulevard rather than running beneath Bailey Avenue as part of the approximately 7-mile extension planned to the University at Buffalo’s North Campus and beyond. And instead of coming above ground through a portal near Northtowns Plaza, new plans call for trains to travel under Kenmore Avenue to surface on Niagara Falls Boulevard just north of Kenilworth Avenue.

NFTA Executive Director Kimberley A. Minkel said the revised plans carry a price tag of about $1 billion, as opposed to $1.2 billion (in 2014 dollars), mainly because of the reduction of subway tunnel from almost 10,000 linear feet to about 3,900.

In addition, the need for a new underground station below Bailey Avenue is eliminated, as is the use of a complicated and expensive boring machine to build the longer tunnel. Now construction crews can “cut and cover” — the same method used on parts of the original Metro Rail project in the 1980s.

Minkel said the impetus for the new route stems from the towns of Amherst and Tonawanda, whose officials early on recognized the economic development projected to result from new transit options along Niagara Falls Boulevard.

“There is more opportunity for development on Niagara Falls Boulevard, and they wanted the benefits of the economic development that comes with a rail extension,” she said.

Indeed. Tonawanda Supervisor Joseph H. Emminger said Monday that officials of both towns seek the benefits of a rail project expected to double ridership of the current system and link UB’s north, south and city campuses.

“We’ve always taken the position we wanted it up on the boulevard sooner,” Emminger said. “That stretch is in the Kenilworth neighborhood, and it’s a little tired. It needs a stimulus to create some development along that strip of the boulevard."

“We’re looking for retail to go in there, and getting the light rail rapid transit up on the street quicker could cause that to happen,” he added.

Minkel said the NFTA listened to local concerns, and despite the significant underground curve required by the new design, engineers determined it would prove safe. Trains exiting and approaching the station would need to slow down anyway, she said, so they could handle the curve.

“There was a big concern since the curve is very dramatic,” she said. “Would it work? Would it be safe? What would it do to the speed of trains?”

In the end, Minkel said planners found they could accommodate the towns’ desire for new development along with UB’s priority of providing a 20-minute ride between its north and south campuses.

Rachel Maloney, project manager for the NFTA, said plans call for the extension’s surface section to travel via the median of Niagara Falls Boulevard before turning east onto Maple Road and to UB's North Campus. Studies also continue to evaluate extending beyond UB to the interchange of I-990 and Audobon Parkway, where a light maintenance and storage yard would be located.

Maloney added that the new plan will involve little need for private property.

“The goal has always been to minimize the impacts and maintain it in the public right of way as much as possible,” she said, adding that the cut and cover method envisioned for the shorter tunnel plan – which involves digging the tunnel and then covering it over, as opposing to boring through – will also result in less neighborhood disruption.

A $1 million study supporting the NFTA’s application to the Federal Transit Administration’s “New Starts” program predicted $1.7 billion in development along the entire route from downtown to Amherst, an increase in daily ridership from 20,000 to about 45,000 trips, and a $310 million increase in nearby property values that would raise tax revenues 32 percent for Buffalo and Amherst.

Maloney said those numbers could grow even more because of the route shift, which now includes Tonawanda.

The plan has survived the first round of approval in Washington and also received state funding to support the environmental studies now under way as part of the project’s newest phase.

Rep. Brian Higgins, D-Buffalo, earlier this year raised major questions about the proposal, however, preferring that the NFTA fix deteriorating facilities in the existing 6.4 mile system as well as extending service to the former Delaware, Lackawanna and Western Railroad terminal slated for new development at Metro Rail’s southern terminus.

Others have raised questions about the idea’s chances of surviving the difficult Washington approval process, especially as bigger cities apply for new projects.

But Minkel said the authority is pressing ahead with its proposal in light of positive forecasts for ridership and economic development. She said the NFTA needs to be “ready to go” with plans for Washington approval, even if current dollars are not be available.

“I’m optimistic. [Money] has been there in the past and will be in the future,” she said. “It doesn’t make sense to stop every time there appears to be changes in federal policy.”

Minkel said planners also recognize the desire of millenials and companies considering expansion to be near transit.

“So we need to advance this and go forward for when those funds become available,” she said.

Minkel said the authority hopes to complete its environmental studies in early 2020, followed by a design phase. If all funding and approvals are obtained, she harbors an “optimistic” target of late 2024 or early 2025 to start construction.

In the meantime, the authority plans a “robust” public participation process of workshops for governments, businesses, residents and other stakeholders. An open house is scheduled 5 to 7 p.m. Dec. 6 at Sweet Home Middle School. A follow-up “scoping meeting” is tentatively scheduled for late January.

The authority has also established a public participation website at www.NFTAMetroRailExpansion.com

A new plan would extend Metro Rail to the University at Buffalo’s North Campus and beyond via Niagara Falls Boulevard instead of Bailey Avenue. (Derek Gee/News file photo)

{ FOR HABUDA STORY } A metro rail car heading downtown is reflected in a puddle left by overnight rain on Main Street, as much-needed precipitation returns to the area, Thursday, July 26, 2012. {Photo by Derek Gee / Buffalo News}

Tim Wode, and employee of Shea's Buffalo Theatre works on replacing some of the 5,000 bulbs on the marque on Tuesday , September 16, 2008 . . (PHOTO by Harry Scull Jr/The Buffalo News)