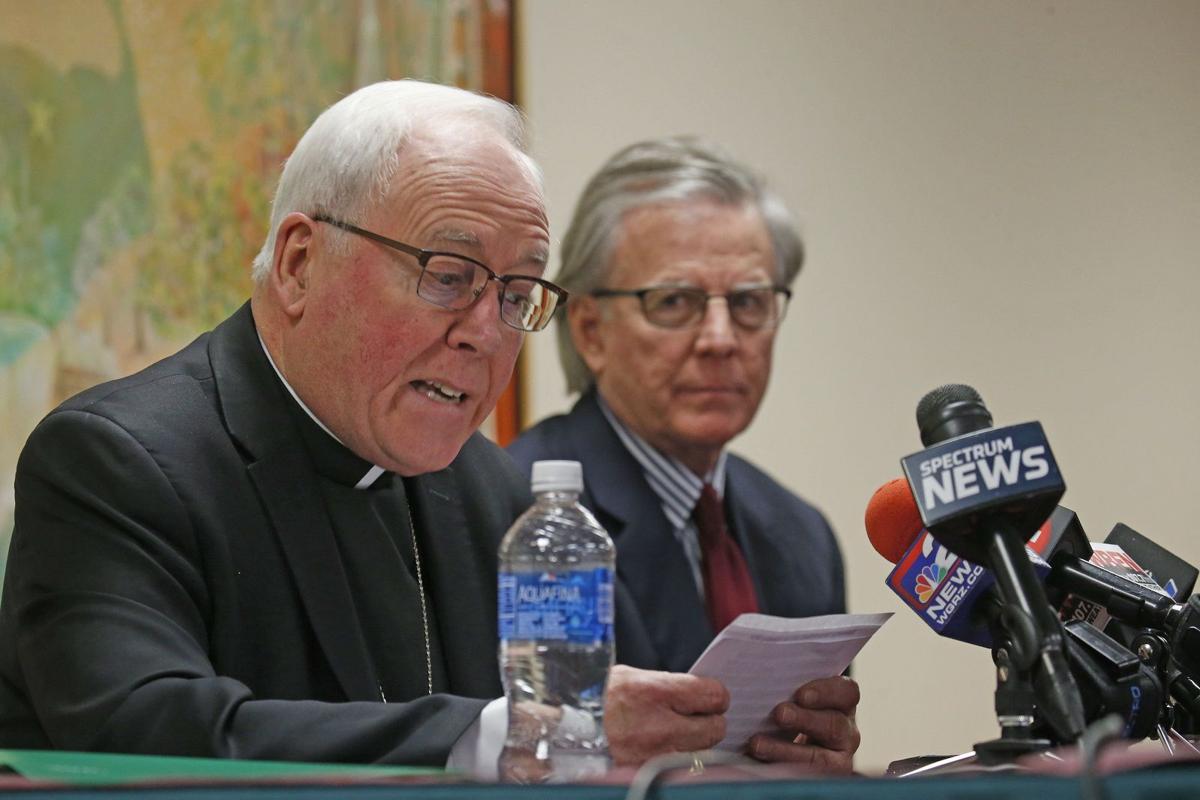 This digital image is on a Buffalo-area billboard that also urges Republican Sens. Patrick Gallivan of Elma and Chris Jacobs of Buffalo to vote for the Child Victims Act. (Photo provided by Kat Sullivan.)

The state's Catholic Conference has spent $1.8 million over six years lobbying Albany to, among other things, derail a bill to make it easier for sex abuse victims to sue.

The Democratic-led state Assembly approved the Child Victims Act last week, but its prospects for passage in the Republican-led Senate are less likely.

The act's most controversial provision would open a one-year window in which victims currently blocked by New York's statute of limitations could sue for damages linked to decades-old abuses. But the Catholic Conference says the act would force institutions to defend misconduct "about which they have no knowledge, and in which they had no role."

To head off the bill and to push other items on its agenda, the Catholic Conference has spent hundreds of thousands a year on lobbyists. For example, the conference last year paid Sheinkopf Ltd. $5,000 a month, the Greenberg Traurig firm $6,000 a month and New York City attorney Stanley K. Schlein another $6,000 a month.

The conference represents New York's Catholic bishops and is headed by the archbishop of New York City, Cardinal Timothy Dolan.

The Catholic Conference lobbies Albany on a number of prominent matters. In recent years it labored, unsuccessfully, to install a tax credit to make private school education more affordable. But with bishops in other states turning to bankruptcy to protect their dioceses from expensive awards in abuse cases, the Catholic Conference of New York became an early line of defense when the Child Victims Act was first introduced more than a decade ago.

The conference's best-financed ally has been the insurance industry, including the American Insurance Association. There's also the Boy Scouts of America, the Orthodox Jewish group Agudath Israel and the conservative Christian group New Yorkers for Constitutional Freedoms, a conference spokesman said. But those three nonprofits spend less on Albany lobbying than the Catholic Conference, according to state records.

Opposition from other quarters has faded away. The New York State School Boards Association, for example, once opposed the bill but no longer takes a position on it, said Jay Worona, the deputy executive director.

"It's certainly an issue of great concern," Catholic Conference spokesman Dennis Poust said. Catholic programs across the state would be jeopardized, he said, if the church must defend lawsuits that reach back to the 1940s, '50s or '60s – cases in which key figures cannot be found or may be dead. Further, the church could have to pay settlements or awards based on modern-day dollars, Poust said.

"The Buffalo Diocese as well as every other diocese in the state has aided victims with compensation for even time-barred cases," he said. "Yes, it's an important issue. We have seen in other states it could have catastrophic fiscal implications."

The Catholic Conference's lobbying expenses have been documented before. The New York Daily News once noted that the bishops' lobbying arm spent $2.1 million on lobbyists from 2007 through 2015, or an average of about $230,000 a year. But The Buffalo News, after tallying reports that lobbyists file with the Joint Commission on Public Ethics, found the Catholic Conference spent at a more rapid pace in recent years.

The records show the conference spent $1.81 million on lobbying from 2012 to the start of this year, or an average of $300,000 a year. So far this year, the professional lobbyists have maintained the same rate, collecting about $25,000 a month from the Catholic Conference.

Patricia Lynch and Associates began a $5,000-a-month contract with the Catholic Conference in 2010, state records show. Because Lynch had been a top aide to then-Assembly Speaker Sheldon Silver, D-Manhattan, her firm was widely viewed as well-placed to sway the Democratic-controlled Assembly. The firm's monthly fee eventually grew to $7,500.

John Aretakis of Troy, an advocate for the Child Victims Act, said in a letter to the federal prosecutor who brought corruption charges against Silver in 2015 that Lynch effectively flipped the Assembly speaker on the issue.

"From 2005 to 2010, Mr. Silver supported a statute of limitations 'windows' legislation that would let childhood sexual abuse victims sue even if the abuse was 20 or 30 years ago," Aretakis told then-U.S. Attorney Preet Bharara of Manhattan in the letter.

"Then about five years ago, the Catholic Conference was successful in getting Patricia Lynch to lobby for them. At that time, I was told by a colleague who works for Ms. Lynch that the 'windows' legislation was dead."

The bill was kept off the Assembly floor from 2009, just before Lynch signed an agreement with the Catholic Conference, through the 2016 session.

The Catholic Conference discontinued its relationship with Lynch and Associates in 2016, after Silver was convicted and prosecutors preparing for his sentencing revealed Silver and Lynch had had an affair. (Silver's conviction was thrown out in 2017, and a new trial has just begun.) The Assembly approved the Child Victims Act in 2017, but as a one-house bill.

Poust would not say why the conference no longer uses Patricia Lynch and Associates, but he said Silver didn't let the bill come to the floor because an alternative had been introduced, and his Democratic conference was split on which to support.

Researchers, advocates for abuse victims and the victims themselves say it can take years, even decades, for victims to come to terms with what happened to them as children, and speak out about it or go to court. That's why proponents of the Child Victims Act insist it contain a one-year window for victims to file lawsuits over abuses that happened long ago.

While the advocates have not poured money into lobbyists, they make campaign contributions and exert pressure in other ways. Gary Greenberg, an Albany-area investor who was abused as a child, formed the "Fighting for Children" political action committee. It spent $84,000 on select Senate races in 2016 in an effort to install a majority that would pass the bill.

Kat Sullivan of Manhattan alleges she was sexually abused and raped by a former teacher at the Emma Willard School in Troy in the 1990s. With money she received from the school, she has been buying space on digital billboards to target those obstructing the bill.

Billboard space purchased along Buffalo's I-190 attempts to pressure Republican state Sens. Patrick Gallivan of Elma and Chris Jacobs of Buffalo into voting for the measure.

Sullivan said no one has made more noise against the Child Victims Act than the Catholic Church. But she said she doubts that most people who donate to the church know some portion of their donations are used for lobbying.

"I don't know how they can write a check to a lobbyist to avoid the cleansing of the truth," she said of the bishops. "What is the meaning of repentance?" For years, church leaders failed to confront the problem of predators within their ranks, she said, and they diverted investigations that would have exposed the abusers.

The fact church leaders might face lawsuits from years ago is "no one's fault but theirs," she said.

With Cardinal Dolan saying the one-year window would be "toxic" for the church, the Catholic Conference supports a measure that drops the window but would extend the statute of limitations on sexual abuse lawsuits for another five years, until the victim is 28. The provision would apply for future victims, not those hoping to sue now but cannot because the statute of limitations ran out on them.

The bill, sponsored in the Assembly by Michael Cusick, D-Staten Island, eliminates any statute of limitations on criminal cases, adds clergy to the list of mandated reporters, and requires criminal background checks for employees and volunteers who work with children in public or nonprofit settings.

"We think that the Cusick bill is focused on prevention of abuse and punishing offenders," said Poust, the Catholic Conference spokesman. Further, the Cusick bill would apply to public and private institutions, he said.

Poust said the conference's lawyers agree that the wording Assembly Democrats use to create the one-year window is muddy and gives public schools wiggle room to avoid the one-year window. The sentences do not specify that plaintiffs need not have filed a notice of claim, a required step when suing a government entity.

Advocates of the Child Victims Act, however, deny that public schools are exempted. So does the main Assembly sponsor, Assemblywoman Linda B. Rosenthal, D-Manhattan.

"The Child Victims Act will level the playing field for all survivors of childhood sexual assault, creating a pathway for them to access justice, regardless of whether their predator was an individual or a public or private institution," she told The News in a statement.

As with some other controversial pieces of legislation, the stalemate over the Child Victims Act could continue for years more if the Senate doesn't approve the bill in this session. The beneficiaries of a stalemate would be the lawmakers who collect campaign contributions on the issue – though the Catholic Conference does not donate to political campaigns – and the lobbyists.

Said Poust: "We would very much like this issue to be resolved, and not have to lobby on this issue again."

This digital image is on a Buffalo-area billboard that also urges Republican Sens. Patrick Gallivan of Elma and Chris Jacobs of Buffalo to vote for the Child Victims Act. (Photo provided by Kat Sullivan.)