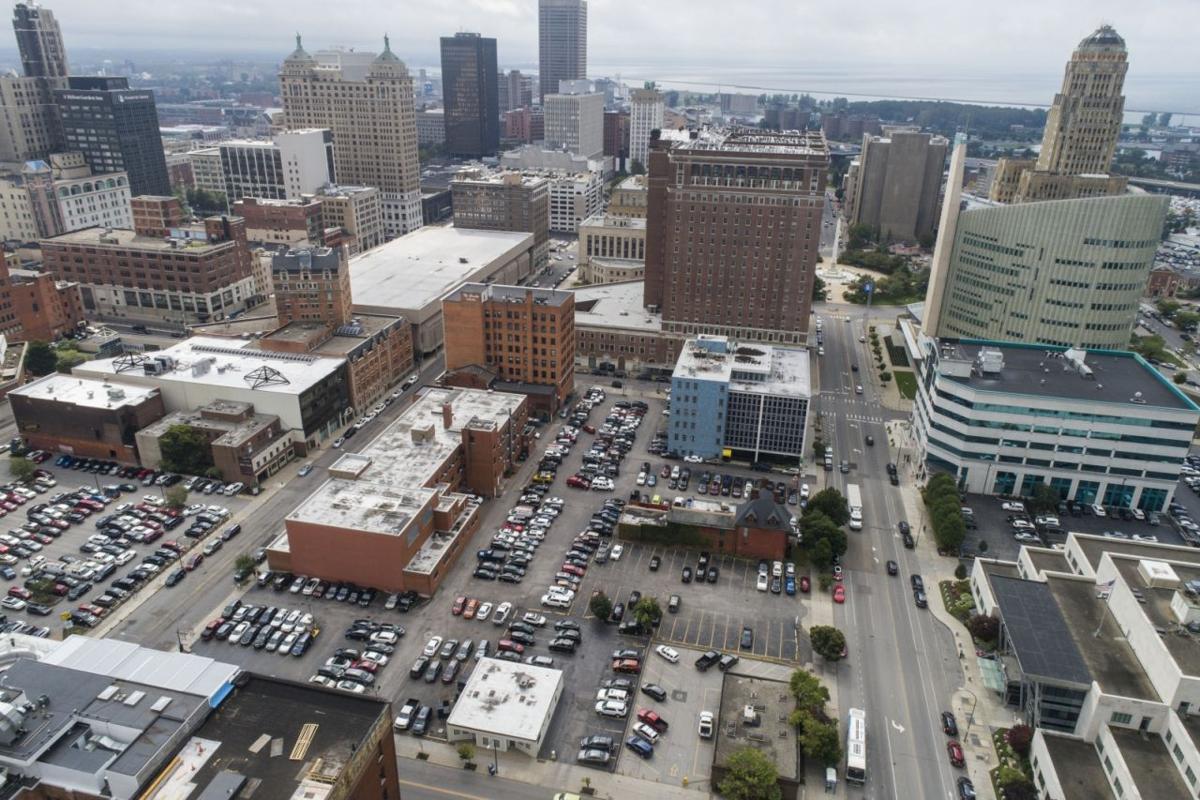 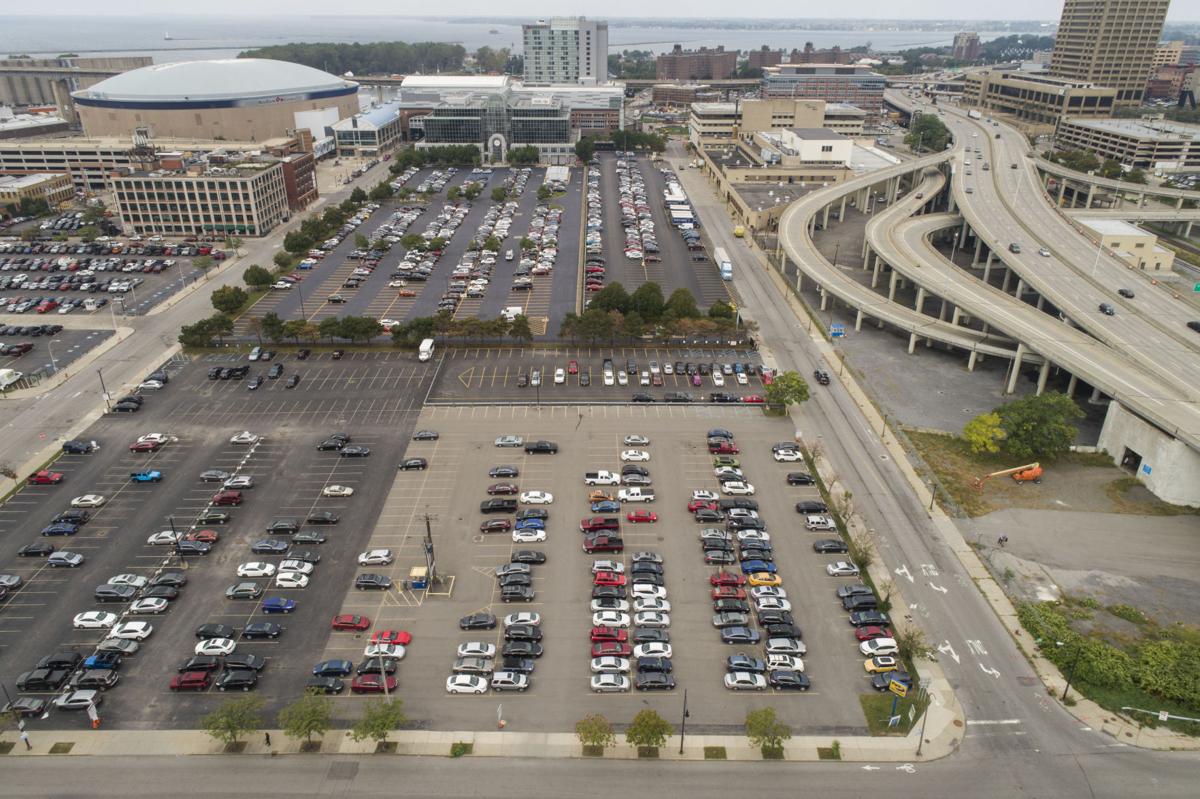 Buffalo needs a new convention center, and a location near Canalside or an expanded footprint near the existing facility are the two best places to build one, according to a study to be released today.

Option 1: Expand the Buffalo Niagara Convention Center between Franklin Street and Delaware Avenue. This option envisions renovating the existing convention center, expanding it into what is now the rear part of the Statler building across the street and taking over the entire block north of the Statler. Sky bridges would connect the parcels. The preliminary cost estimate: $350 million to $429 million.

Option 2: Build one large and contiguous convention center at the HSBC site between Washington Street and Michigan Avenue. This option calls for constructing a convention center from scratch near Canalside on land currently used as paved parking by HSBC and The Buffalo News near KeyBank Center. The preliminary cost estimate: $329 million to $368 million.

"We recommend expanding convention center function space to approximately twice the size of the existing building in a state-of-the-art development," HVS directors Thomas A. Hazinski and Catherine Sarrett wrote in the report's opening statement.

Before picking a location, the community needs to decide if it wants to stay in the convention business, Erie County Executive Mark Poloncarz said during an editorial board meeting with The Buffalo News. If it does, the community must come up with a plan because the current 40-year-old building is becoming obsolete, Poloncarz said.

"Everyone talks about the new Buffalo and the new Erie County, and you have the old Buffalo sitting in the middle of it – the convention center," Poloncarz said. "I don’t want to see our community, after it’s gone through this dramatic change, take a step back and say we’re fine with what was the top and best of the line in 1978. We’re better than that. And we've proven that over the last five to 10 years."

The HVS study took a cursory look at seven potential sites for a new Buffalo convention center, including several locations along Oak and Elm streets, the Outer Harbor, and the Adam's Mark Hotel location. County legislators refused to allocate more money for HVS to study other alternate locations in depth. But a preliminary assessment by HVS showed that no alternate location would be superior to the HSBC site in terms of size, city impact, accessibility and cost.

The shortcomings of the existing, bunker-like convention center have been long known. HVS consultants described the existing center as "functionally obsolete" and said no vertical expansion is realistic.

Poloncarz and Visit Buffalo Niagara President Patrick Kaler pointed out that the Buffalo Niagara Convention Center is the oldest convention center in the United States that has not undergone a major renovation.

"It’s the place you want to go to when the nuclear war started," Poloncarz said.

Convention centers in Pittsburgh, Cleveland, Milwaukee and Richmond are two or three times larger than Buffalo's. The state of the existing facility has resulted in the loss of about 780 conventions and meetings, despite its location near a one-of-a-kind draw in Niagara Falls, Kaler said.

"If Buffalo wants to continue the positive path that the destination is experiencing with its revitalization and new tourism infrastructure, exploring the future of the convention center is necessary," Kaler said.

But several hurdles exist to building a replacement convention center, aside from figuring out where to put one. Those hurdles include getting the community to agree that replacing the existing convention center is worth the expense to taxpayers and also persuading the state to help pay for it.

With the study's release, the county will open a 90-day window for public feedback on whether Erie County should stay in the convention business.

"I think the answer is yes, but it's a question the community needs to answer," Poloncarz said.

Each of the site options offers pros and cons.

Renovating the existing convention center and expanding it to encompass nearby blocks would keep the building in the heart of downtown, within easy walking distance of many hotels, restaurants, bars and entertainment and cultural institutions. That makes it a preferred site by event planners whom HVS surveyed. The area also has more available parking and could represent a hotel redevelopment opportunity for the Statler and potentially spur more surrounding city development.

But expanding the current convention center footprint would require connecting three parcels over city streets with sky bridges and make it more challenging to create functional space. A first-floor exhibit hall would be impossible, and the site would offer little expansion potential, according to the report.

By moving the convention center to the HSBC site near Canalside, the new center would have a larger footprint with more functional floor space and a more efficient "state-of-the-art" floor plan. It also leaves adequate room for future expansion. It would be more accessible, cheaper to build and pose the least disruption of ongoing conventions as the new facility is built.

The biggest downside, however, is the limited existing hotel, restaurant, entertainment and retail offerings. Because the site is more remote from the city center, the county would have to rely on the willingness of private developers to build new hotel, restaurant and entertainment offerings around the new facility. There's also concern that existing downtown hoteliers could be hurt by the relocation.

Prior discussions about possibly relocating the Buffalo Bills stadium near the HSBC site were not considered in the study and had no bearing on HVS's findings, Poloncarz said.

The county executive said he has no preference about where to locate a new convention center.

"If you’re looking for the silver bullet convention location, we don’t have one," he said.

Highlights of the study were shared with Howard Zemsky, commissioner of Empire State Development, the state's economic development arm. Also briefed were Mayor Byron Brown, Bills and Sabres owners Terry and Kim Pegula and key members of the state delegation in Albany. Property owners who could be affected by the two site options were not contacted.

The last serious push for a new convention center happened 20 years ago. At that time, consensus built around a new facility at the Mohawk Ramp site, just northeast of the existing building. But that effort died when the county could not attract financial aid to cover the cost.

Instead, the county has spent about $13 million in renovations over the past 15 years to keep the current convention center as competitive as possible.

Local officials say they believe they stand a better chance of gaining assistance from the state for a new facility.

Kaler, of Visit Buffalo Niagara, noted the state has committed money for new convention centers in Albany and Rochester in addition to its $1 billion commitment to expand the Jacob K. Javits Convention Center in New York City.

Poloncarz mentioned looking at other financing options, including creating a special taxing district or increasing the hotel and bed tax.

Even if the location, financing and property acquisition questions are swiftly answered, a new convention center would still be four or five years away, Poloncarz said.

But the first step requires collecting community feedback on the question of whether the city should continue to be a convention destination, Poloncarz said.

"By this time next year," he said, "we should have made a decision that yes, this is what we’re doing, and this is the direction we want to go."

The largest living thing on earth is edible and underground

The largest living thing on earth is edible and underground

Buffalo Niagara Convention Center is back in business and looking ahead