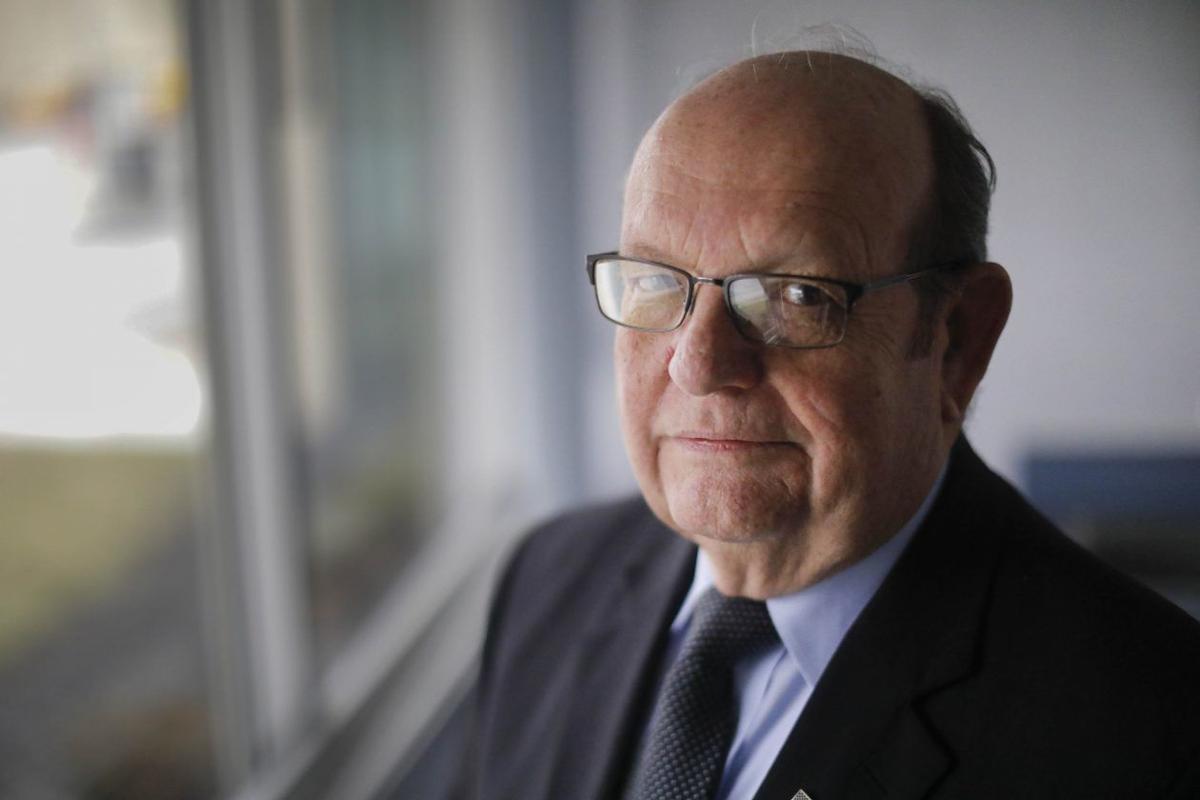 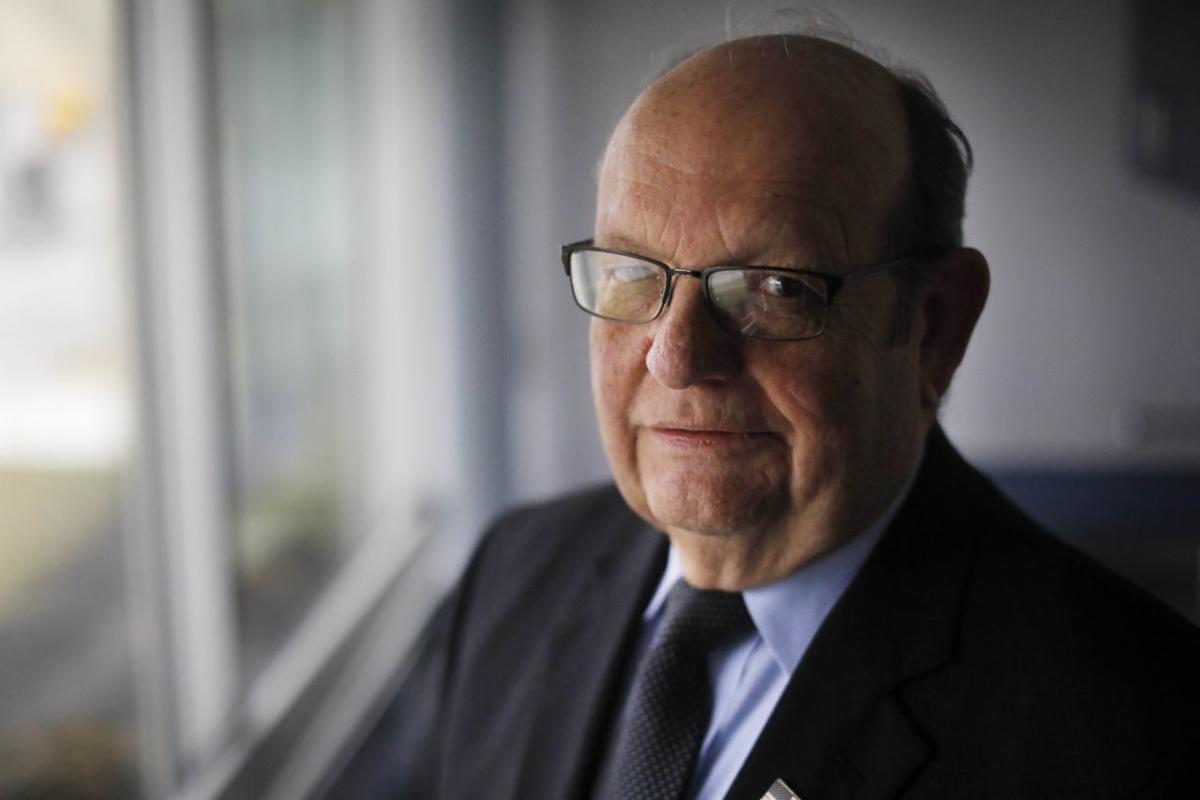 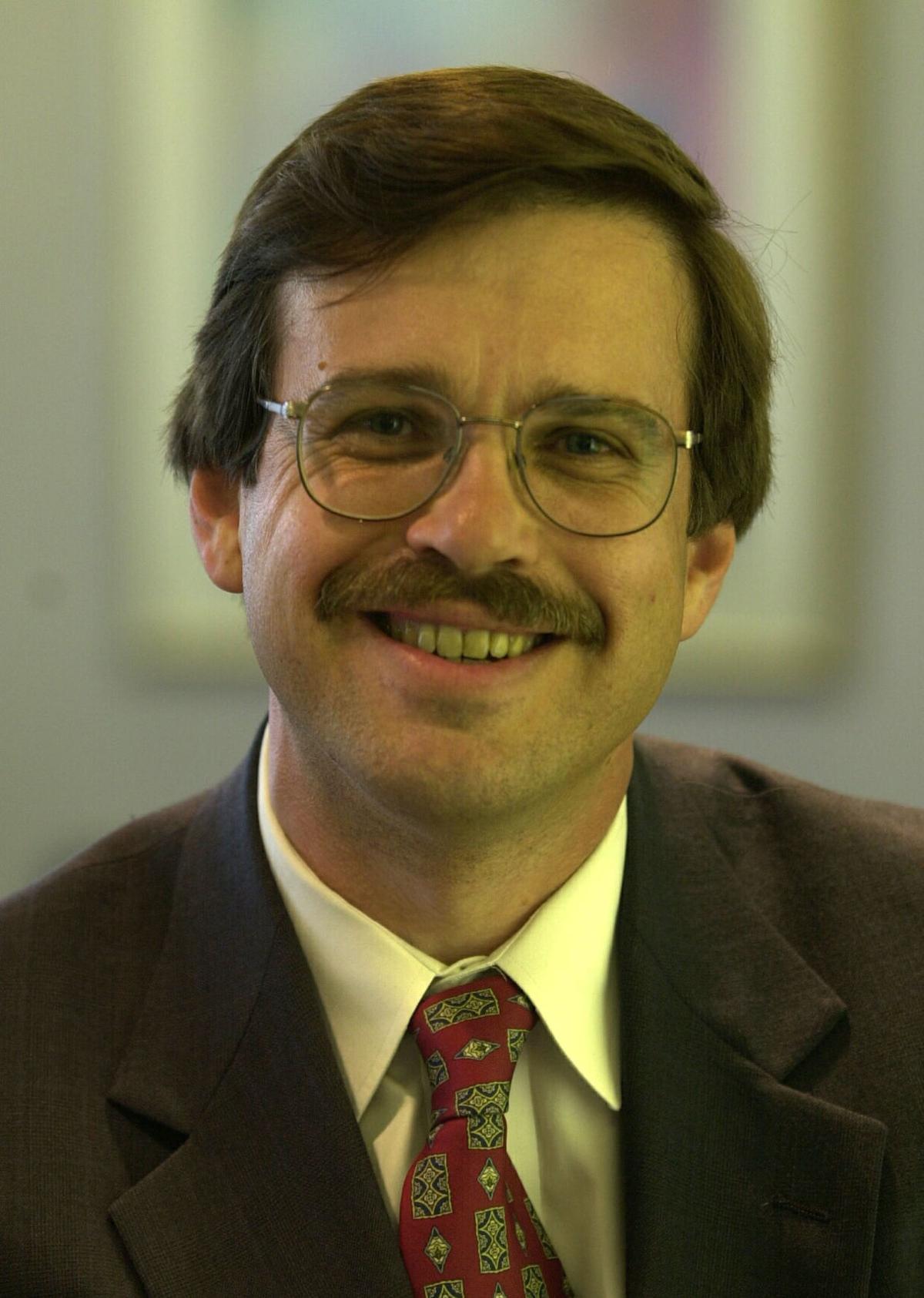 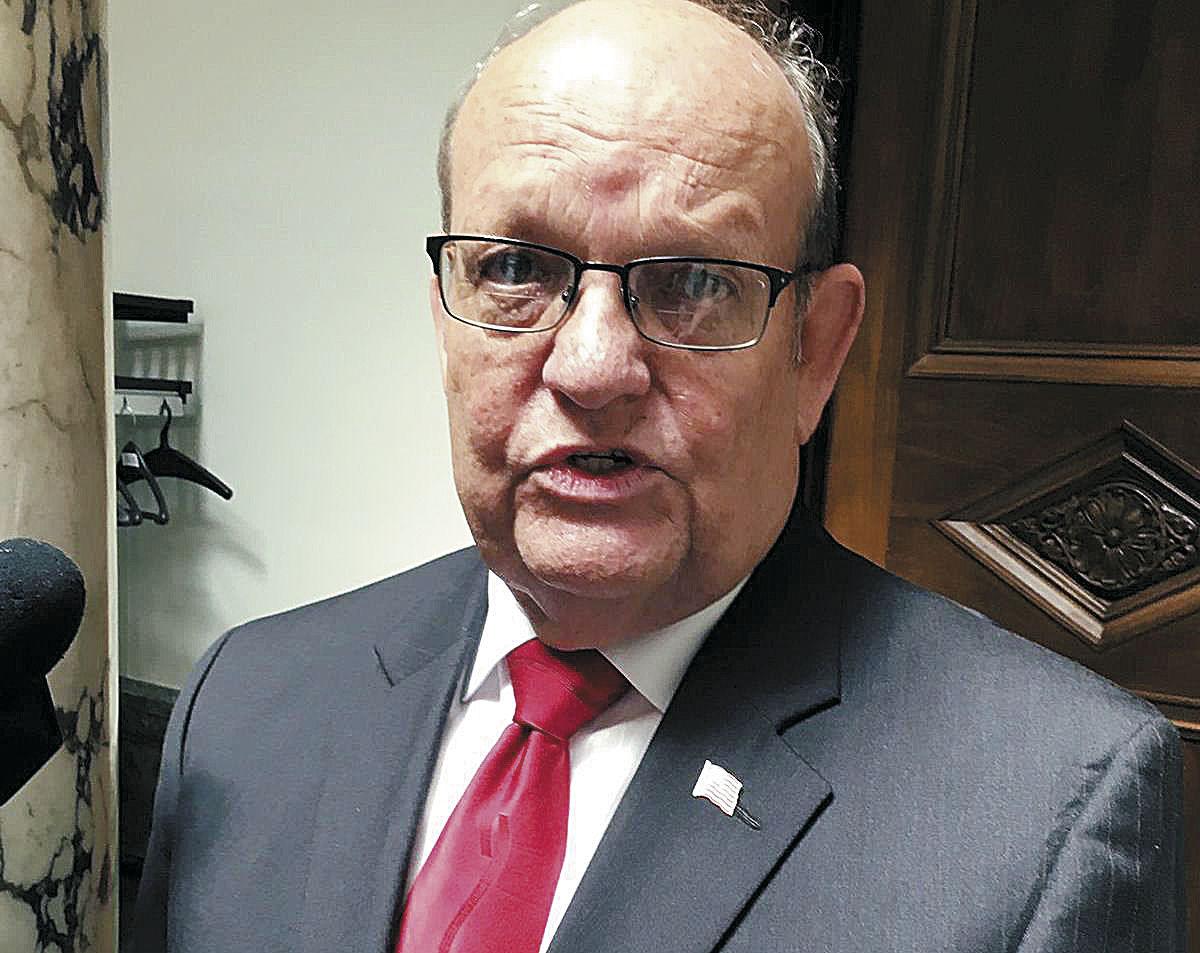 With Democrats about to reclaim the Erie County Water Authority, the Republican-controlled agency gave its executive director a golden parachute if Democrats oust him.

The Water Authority would pay Executive Director Earl L. Jann Jr. between $300,000 and $400,000 under a new contract if he is forced out this year once control of the agency flips from Republicans to Democrats.

The hiring of Jann in May had already been criticized. Jann is a retired pharmaceutical salesman and former Marilla town supervisor whose previous Water Authority experience was serving as one of its commissioners.

A longtime nest of political patronage, the Erie County Water Authority is controlled by the party that controls the Erie County Legislature. The party in power typically appoints loyalists to the board and other positions, including the executive director, a job that pays more than $150,000 a year.

Jann signed the contract despite five years ago working to oust the agency’s longtime executive director without paying the $150,000 golden parachute that contract allowed. At the time, Jann said: “We don’t believe there should be contracts for anybody in the Water Authority.”

He said his new contract – which The News obtained under the Freedom of Information Law – simply protects him if he is arbitrarily fired. It doesn’t give him a payout if he leaves of his own accord. He now says that his real objection five years ago was that contract allowed a payout even if it expired and was not renewed.

Jann’s new contract was approved by the Water Authority’s board of commissioners in a party-line vote Jan. 11, days after Democrats again became the County Legislature’s majority party, a precursor to Democratic control of the Water Authority a few months down the road.

Jann, a Republican, said it might appear as though his contract came together because a Democratic takeover loomed. But the commissioners always intended to give him an employment agreement, he said. The task was put aside for months in the face of more pressing matters.

“I would have preferred that the contract get done prior to the last election,” Jann said. “But it was just one of those things that got pushed down.”

If the goal was to make it too expensive to fire Jann, it probably worked, said County Legislator Thomas A. Loughran, a Democrat from Amherst.

“This move is more evidence of how out of control it is over there,” Loughran said. “I don’t know who is satisfied with the Water Authority, except for the political figures. Why would they insulate someone who really doesn’t have the credentials to be in that position?”

Two out of three

At many levels of government, election results propel political appointees out of office without golden parachutes. It's the rare city fire chief or U.S. attorney, for example, who has a contract ensuring years' of continued salary when forced out after the votes are counted.

Why does it happen at the Water Authority?

Dan Ward, a former Amherst town supervisor who remains active in Democratic circles, explains that members of the Water Authority's governing board are extensions of their party organizations. As such, they are expected to keep party interests in mind. The commissioners, and their parties, protect the system even when they don't control it because control will cycle back to them someday.

"Each party eats pretty well at the trough," Ward said, "the dominant party a little better."

In recent weeks, the County Legislature put out its annual call for anyone interested in becoming a Water Authority commissioner. Each year, people not tethered to a party hierarchy apply and are denied. The part-time post, which pays $22,500 a year, in recent years has gone to an operative, ally or donor acceptable to party leaders.

"The public should demand that the new commissioner have independence, integrity and the good of the ratepayers first – not the political parties," Ward said.

Deputy has a contract

Jann's three-year agreement guarantees his full salary through 2020 unless he's fired with cause.

The pact, which sets his salary at $153,600 this year, does not allow him a take-home car. While the contract grants him health insurance, Jann does not take it because, at 71, he is on Medicare. But he accepts the authority's "opt-out" payment: $11,550 this year.

While Jann has a golden parachute, so does the authority's No. 2 official, Republican Robert J. Lichtenthal Jr. He signed his three-year contract in April 2017, just before Jann took on his new title.

Lichtenthal, if terminated July 1 of this year, would be guaranteed $360,000. That's how much the contract would have paid him before expiring in April 2020, when he will be 62.

Lichtenthal, respected inside the agency for his knowledge of the finances, has worked there longer than his boss and makes more money, about $200,000 this year.

Like Jann's agreement, Lichtenthal's does not grant him a payout if it expires and the commissioners have notified him in advance they will not renew it.

At this point, Jann and Lichtenthal are the only Water Authority officials with their own employment contracts.

Both contribute to their party. The Jann household has given about $16,000 to various Republican causes in New York since he was appointed a commissioner in 2011, according to online records kept by the State Board of Elections. The Lichtenthal household has given some $7,200, the records indicate, but that total might be low. The full slate of computerized records don't go back to 1996.

Neither was the first Water Authority executive to want the job security that a hefty going-away payment provides.

When former Executive Director Robert Mendez saw the winds shift against him, he signed a new contract buffing up his golden parachute five months before the old one was to expire. When he was later ousted, the Water Authority avoided a $154,000 payout to Mendez by keeping him on the payroll for six more months and giving him health insurance for life.

Edward J. Kasprzak was the Water Authority's deputy director before Lichtenthal got the job. Kasprzak, a Republican, left of his own accord in 2007. He collected some $230,000 when he left.

The Water Authority says its executive directors should have "10 years of increasingly responsible and successful executive experience in the administration of a large-scale municipal or private water-distribution system."

The summary of desired qualifications goes on to say the executive director should have graduated "from a college or university of recognized standing with major work in hydraulic engineering or business or public administration..."

The summary ends with these 16 words: "...or any equivalent combination of experience and training sufficient to indicate ability to do the work."

Those 16 words create a loophole wide enough to accommodate whomever the party in power wants, says Loughran, the Democratic lawmaker from Amherst.

Last year, he introduced a measure that attempts to strike the phrase. It has gone nowhere. Now he intends to ask the county's personnel commissioner to examine and change the job description. But without a majority of lawmakers on his side, Loughran's proposal is in doubt.

On its website, the Water Authority tells customers Jann graduated from Canisius College with a degree in history. He had a 36-year career in pharmaceutical sales, a job which, the Water Authority notes, required that he pass microbiology and bacteriology courses, giving him an understanding of the authority's water-testing program.

He held elected positions for the town of Marilla, including town supervisor. In those elected roles, Jann established three water districts, built a community center, computerized town operations and formed a sanitation department with a recycling center, the Water Authority website says.

Jann said he has pushed along several improvements at the authority. There will be a new generation of equipment to control the flow between treatment facilities, pumping stations and tanks; there is a system to alert customers and large institutions, such as hospitals, to interruptions in service; old pipes are replaced more rapidly to limit leaks; and officials are working toward a system to move water from north to south, so the Southtowns can rely on the Van De Water treatment plant on the Niagara River should the Sturgeon Point plant on Lake Erie fail or lose its links to customers, like when a 42-inch main failed last summer.

As for Loughran, Jann said,"Quite frankly, I think he is just doing political grandstanding."

Rarely have Water Authority directors been engineers, Jann said. In fact, the title used to be "administrative director" – which would be more apt today because the organization employs people with professional credentials for engineering decisions, financial management and legal concerns, he said.

"The position of executive director does not require an engineering degree," Jann said. "But it does require some common sense, and it does require the ability to manage people. And I believe my resume demonstrates that I have that ability."