'Nature as a refuge': Final design for the Riverline is unveiled
0 comments
Share this
Support this work for $1 a month
Mark Sommer

An urban nature trail with woodlands, meadows and wetlands, in a once-industrial area minutes from downtown, was envisioned by city planners decades ago.

But the possibility of a nature refuge only gained steam when the Western New York Land Conservancy began pursuing the idea four years ago. On Monday, that idea – now fully formed as the Riverline – took a big leap forward with the release of a final concept design.

The nature sojourn would follow an abandoned DL&W railroad corridor, beginning at Moore and Miami streets, and ending 1.5 miles later on a half-bridge that extends over the Buffalo River, across from the Tesla facility at RiverBend. A half mile of side trails are also part of the design.

"We've reached a significant milestone in the development of the Riverline," said Nancy Smith, the Western New York Land Conservancy's executive director. "We look forward with great enthusiasm to working with the community and bringing to life this design, centered on the idea of nature as a refuge."

Creating an urban linear park that connects people, nature and the river appeared, for many years, out of reach. The Riverline will be part of a trend around the country to turn neglected industrial sites into accessible and often elevated destinations. Others include the High Line in New York City, Dequindre Cut in Detroit, the 606 in Chicago and the Harbor District Riverwalk in Milwaukee.

Completing the vision is still a ways away. The Riverline has a preliminary price tag of $30 million to $50 million, depending on a structural engineering analysis of existing bridges. The Land Conservatory raised $1.3 million for the work done to date, but has nothing yet for construction, said Jajean Rose-Burney, the Land Conservancy's deputy executive director. He said the organization is hopeful of receiving significant government funding later in the year.

'Inclusive and based in nature'

Steven Handel, principal of Green Shield Ecology, said there will be a "mosaic of landscapes" along the Riverline that will bring beauty and biological diversity year-round.

A path made of crushed limestone would follow existing berms, with additional bridges to maintain elevation and provide overlooks. Public plazas and low-key entryways would be integrated into the trail, with social activity along some of the bigger streets that traverse the three neighborhoods of Perry, the Valley and the Old First Ward.

The route includes gardens, such as one planned for Chicago Street, gathering spaces, and nature-based recreation, including slides at Mackinaw Street. The trail would connect to parks and kayak launches along the Buffalo River, as well as the Empire State Trail and Canalside, the Outer Harbor and Larkinville.

The design of the Riverline included extensive community outreach. Anthony Armstrong, the project manager, said the organization strived from the outset to be sensitive to the concerns of the people who live along the proposed trail.

Entrances were designed to respect the character of the neighborhoods, Armstrong said, with gateways at intersections offering high-profile public access points and neighborhood connectors providing low-key entry for those who live along the route.

The concept design was developed over the past nine months by W Architecture and Landscape Architecture of New York City, Hood Design Studios, based in Oakland, Calif., and Green Shield Ecology of Bridgewater Township, N.J.

"What we are looking to have is a project that, in the end, embodies a future that is inclusive and based in nature," said David Ostrich, W Architecture's senior associate.

The land planned for the Riverline is owned by Niagara Frontier Transportation Authority, which is supporting the project and is expected to lease the land to the Western New York Land Conservancy.

The trail will be ADA-compliant and bicycle-friendly, with a Del Cycleway planned between Louisiana and Hamburg streets.

Armstrong said the project would be phased in, as was the case with the High Line, about the same length as the proposed Riverline. The approximate one-half mile stretch from Moore to Hamburg Street – about one-third of the trail's length – would likely be constructed first once funds are secured.

"The Riverline will be a destination like none other, enjoyed by residents and visitors alike that embraces the region's unique history and environment," said Rep. Brian Higgins, a strong backer of the project who said Monday he is attempting to deliver $11.5 million in federal funds.

The trail has three main components: the Del, the Junctures and the Basswoods. Here's a look at each phase.

The Del would begin at Moore with a planned entry plaza. The route would start with a trail up the existing slope before settling into a linear trail with houses often on either side, though usually out of sight.

Many of the plants and trees there now are invasive species that will be removed.

"There is no intention of clear cutting," Armstrong said. "It's more about how to save the good stuff while taking away the invasives."

There could also be a sledding hill and snowshoeing in the winter, he said.

The first of a series of protected crossings would occur at Louisiana Street, allowing people to stay high off the ground.

The Junctures, the trail's smaller middle section, would start at Sidway Street and use a long, meandering pedestrian bridge to take people over a flat stretch of land and railroad tracks into Red Jacket Riverfront Park. Evergreen buffers and other shielding are planned to minimize sound for nearby residents.

The trail would then enter the Basswoods phase, offering a more expansive view of nature. An area across from the Concrete-Central Elevator, to be called Basswoods Cove, is planned to bring people closer to the river's edge. The trail then continues to a double bridge crossing and half-bridge overlook.

A place of respite in nature, so close to downtown, will be a surprise to some – even if the idea has kicked around for years.

"We want the Riverline to feel wild, like a place of refuge, a place where you are surrounded by the city but you're not, and lose track of that fact as you go," Armstrong said.

The Buffalo Outer Harbor Multi-Use Trails and the Lackawanna & Hamburg Shoreline Trail would get $2 million each under Rep. Brian Higgins' requests in the bill, which he released Wednesday.

The Riverline, a project seeking to transform the former DL&W rail corridor into a 1.5-mile urban nature trail along the Buffalo River, go…

People are encouraged to use cell phones and digital cameras to document examples of what The Riverline can become.

Land Conservancy gets grants for Riverline

The First Niagara Foundation in partnership with KeyBank awarded $40,000. Moog Inc. gave $75,000, which will be distributed over three years.

Early designs for the Riverline to be shown Feb. 24

The Western New York Land Conservancy wants the public to consider and offer feedback on early design concepts for the planned Riverline trail. 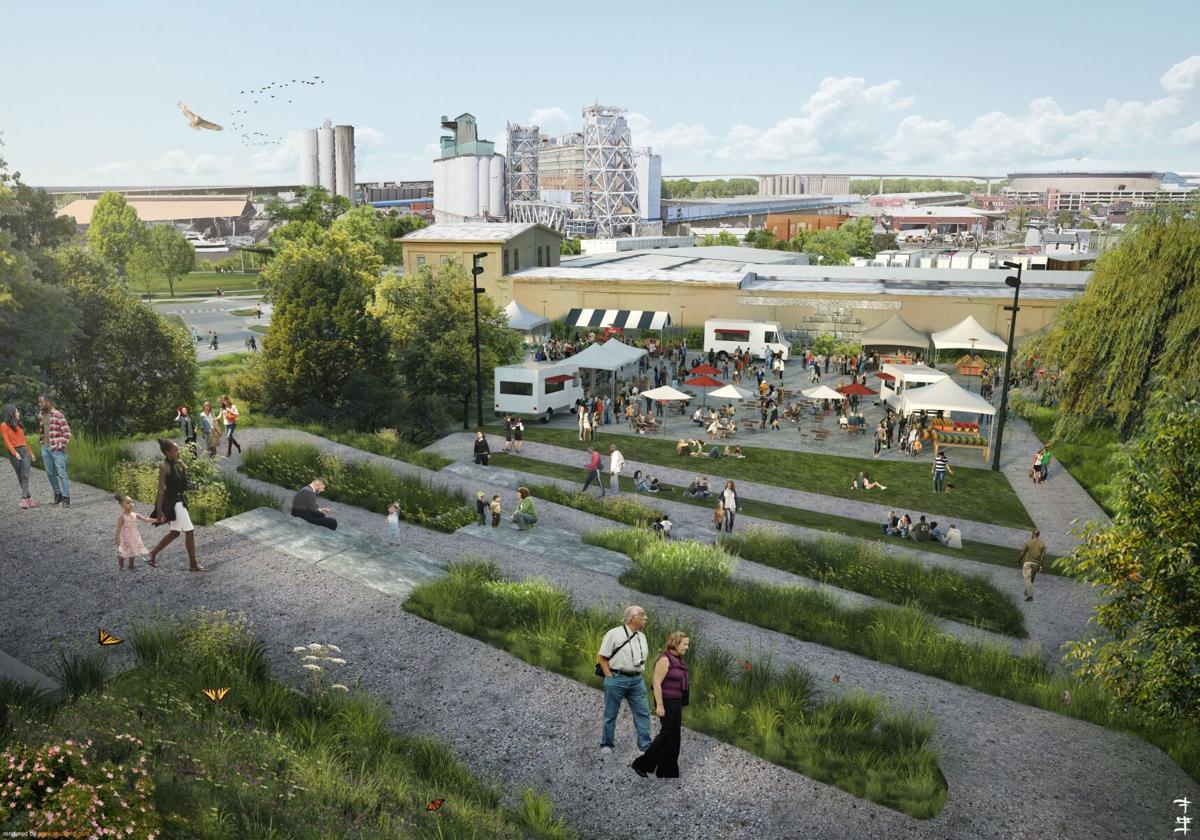 This rendering of an entry plaza is imagined at Moore and Miami streets, where the trail would begin in the Old First Ward. 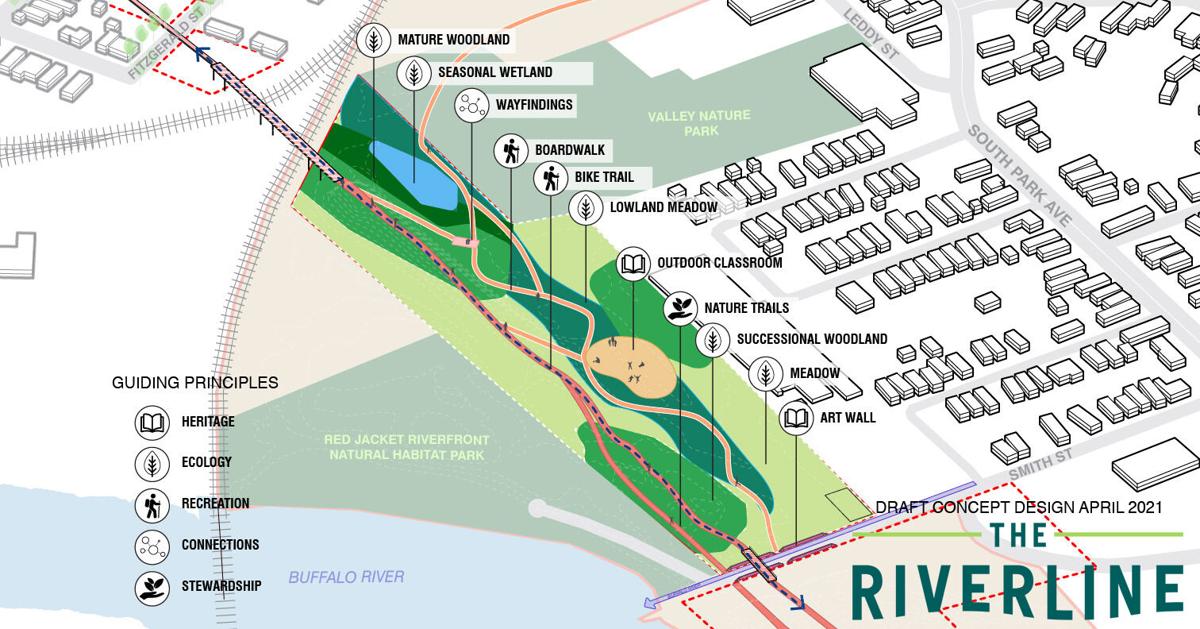 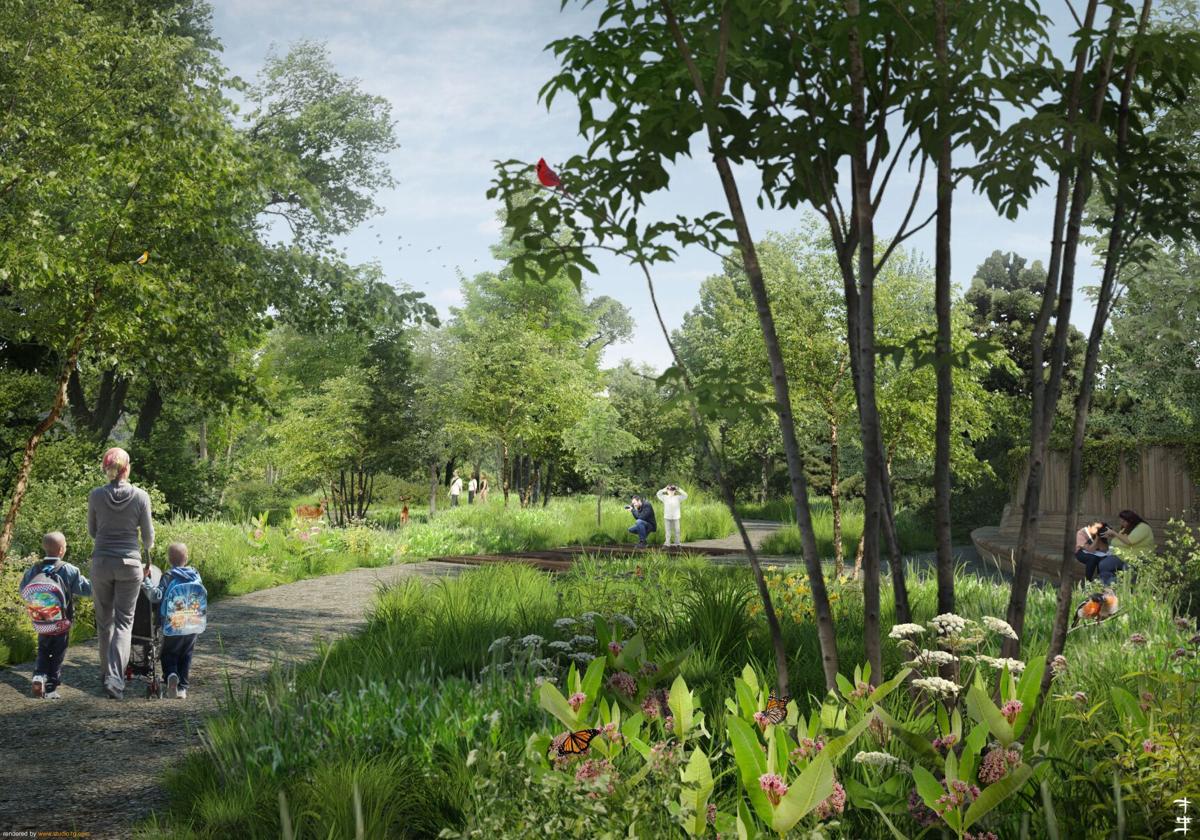 This rendering of the 1.5-mile Riverline shows the nature refuge it is conceived to be. 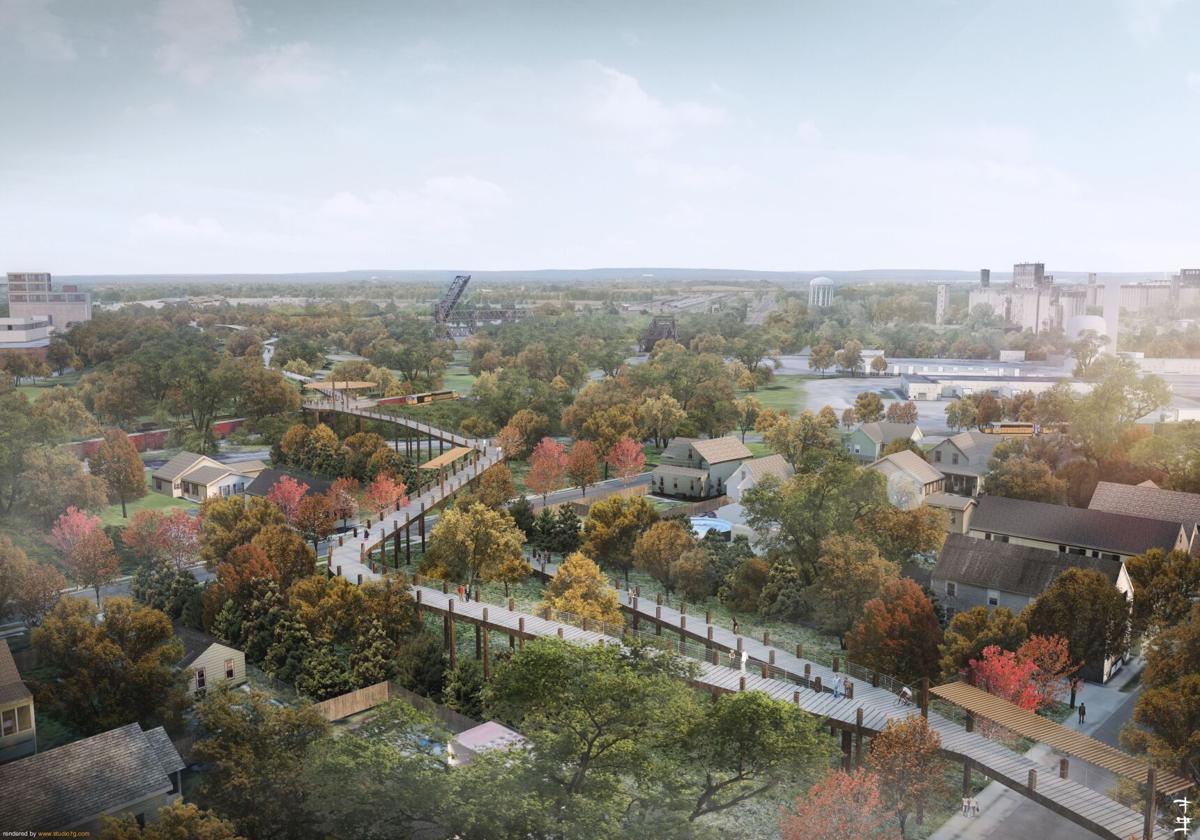 A rendering of a pedestrian bridge that connects people to the trail. 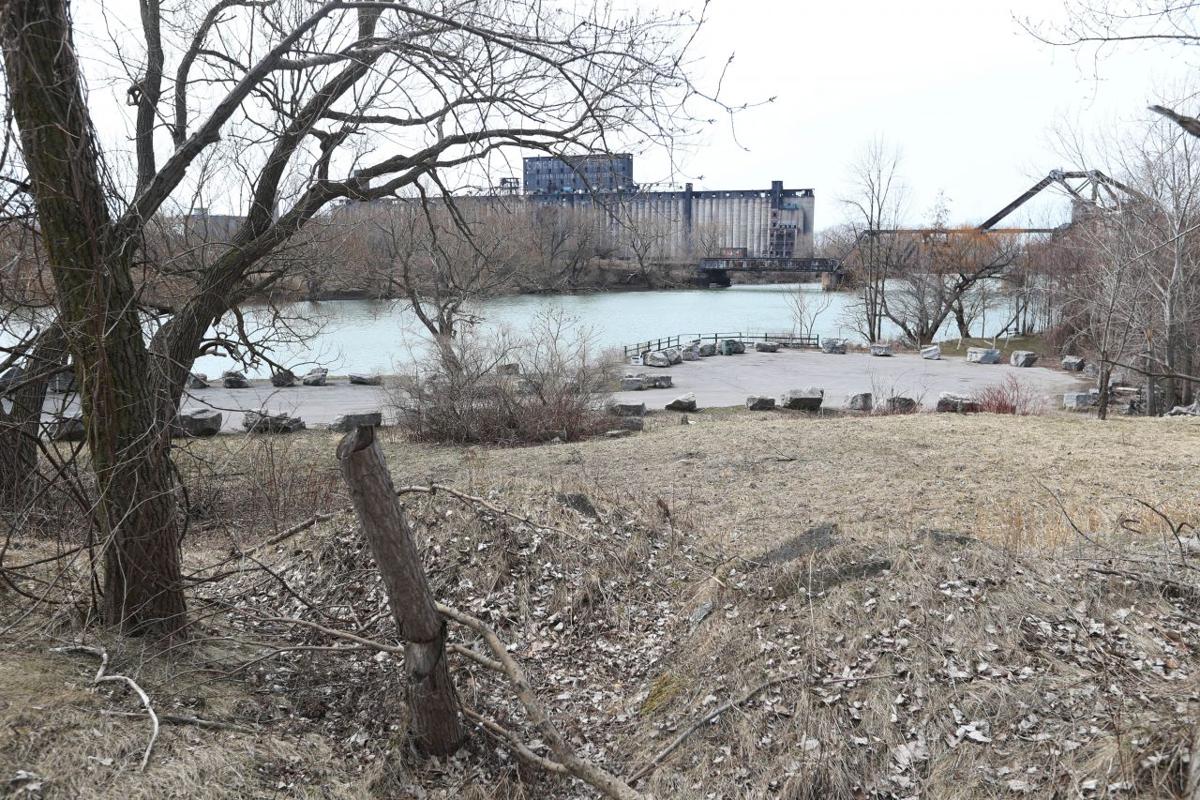 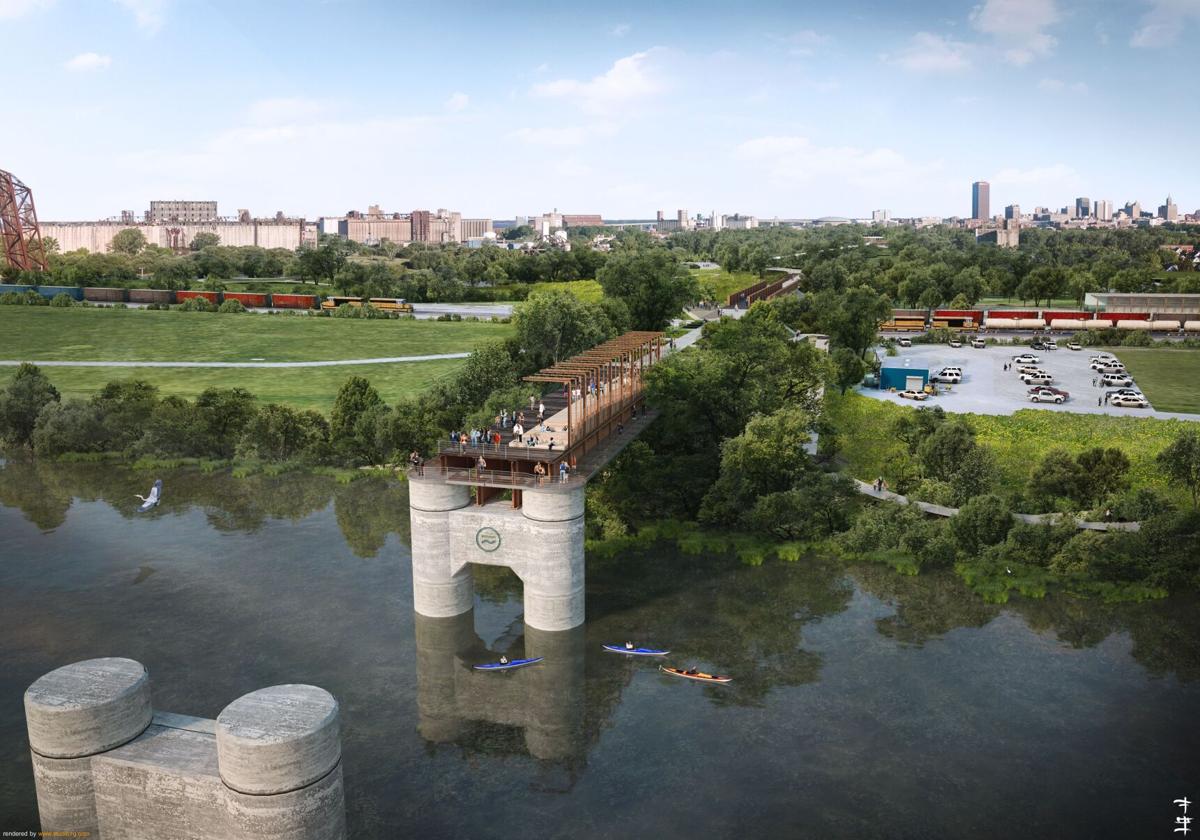 A half-bridge at the eastern end of the trail looks out onto the Tesla facility at RiverBend.