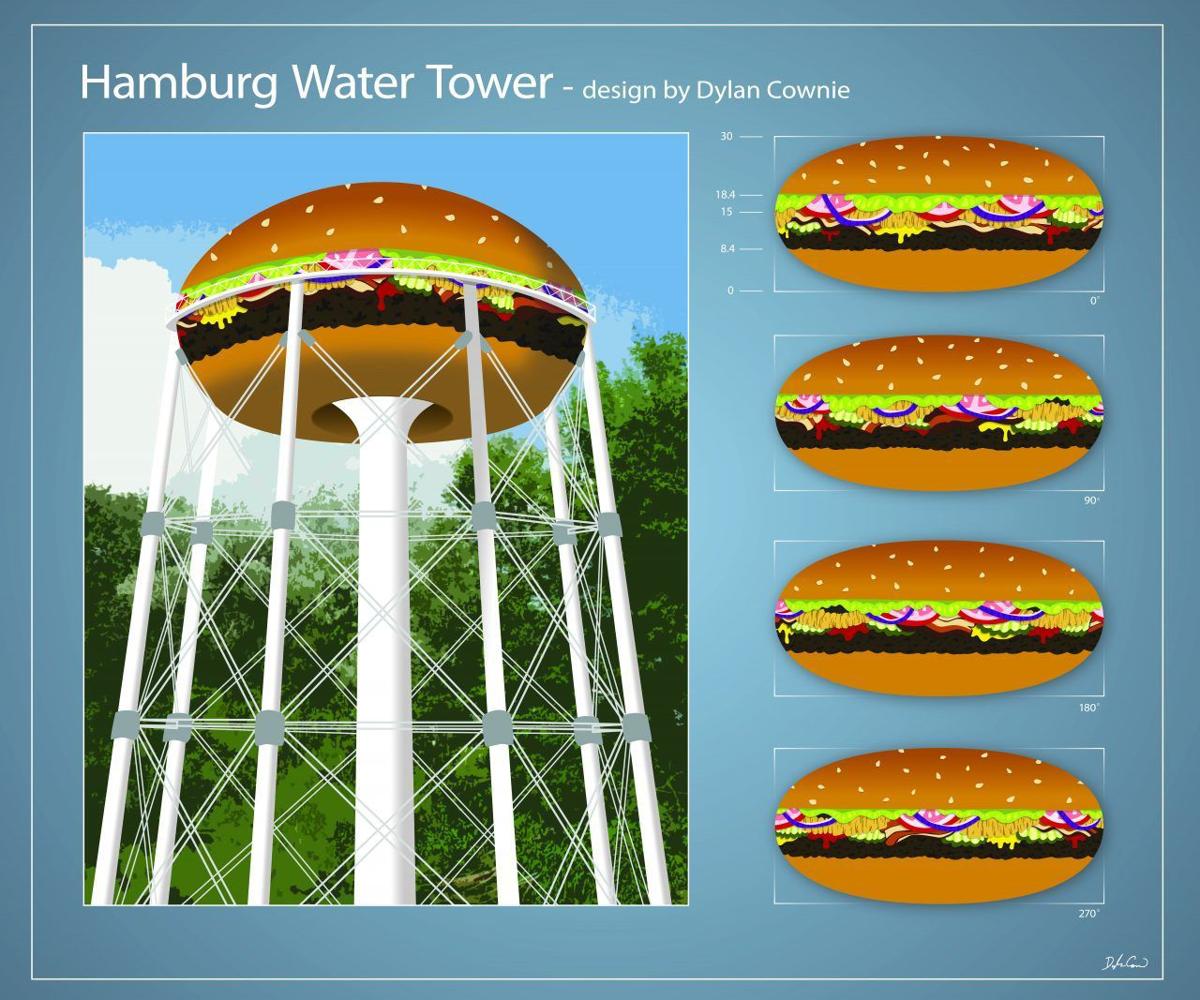 Dylan Cownie submitted this rendering for his vision of turning the Hamburg water tower into a giant hamburger. 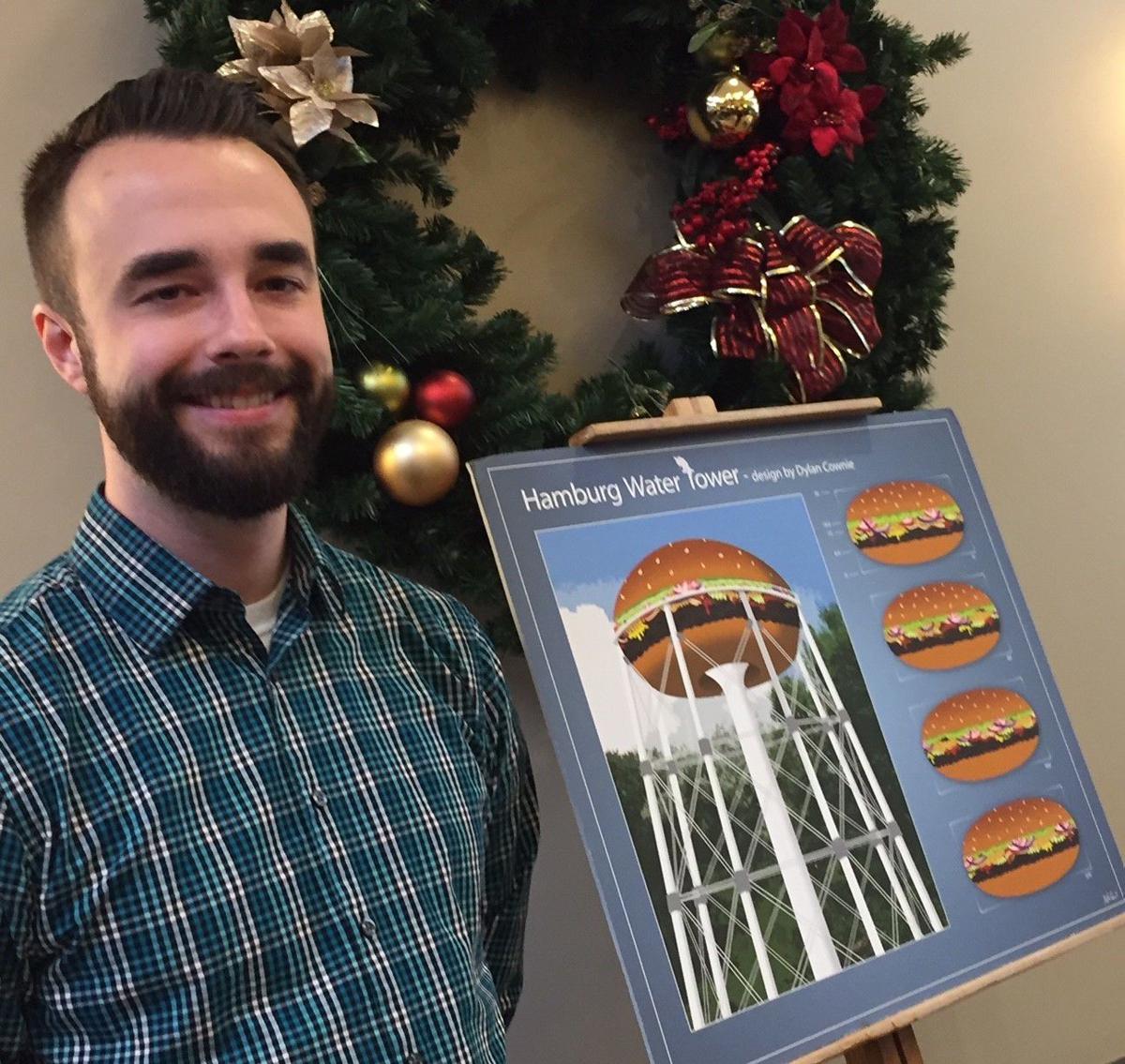 Dylan Cownie with his winning design for turning the Hamburg Water Tower into a giant hamburger. (Dan Herbeck/Buffalo News)

To some folks who live, work or run businesses in the Town of Hamburg, this is a whopper of a story.

Others might find the whole thing kind of cheesy.

The Hamburg Water Tower committee announced Saturday that graphic designer Dylan Cownie has won a competition to design artwork for the town’s water tower — a rusty, old structure that will someday wear the look of a large and tasty hamburger.

When Cownie was working on ideas, he mostly thought about two things — what people would like to see and what they like to eat.

“I thought, ‘How do we take something dull and ordinary and make it interesting for people to see?'" Cownie said after hearing the good news. “People like lots of colors, so let’s make it colorful. I also wanted to make it look like something people would like to eat, so my design is a burger with lettuce, tomato, red onion, onion ring, bacon, pickles, ketchup and mustard, all on a sesame seed bun.”

A vote was taken among Hamburg residents. Thousands of people participated, and the Town of Tonawanda resident's proposal was selected over three others, said Chris Hannotte Luly, chairwoman of the water tower organization.

“We’re excited,” Luly said. She said she hopes the water tower will someday be an “iconic” exhibit of public art that people will drive many miles to see.

Her announcement was made during “Shop Local” activities at the Staub Square shopping center in the Village of Hamburg.

Organizers believe it will take at least two years before the tower — which is located off Howard Road and seen by thousands of State Thruway travelers every day — gets painted.

“We need people to know, this is not going to be done with taxpayer dollars,” said Amanda Lee-Mamon, social media director for the water tower committee.

Organizers hope to fund the project with grants and donations, she said. Town board members gave their blessing to the project last year.

The Buffalo News asked a few shoppers and business people what they thought about the idea.

“There has been a lot of talk about this in the village. Some people say it’s a big waste of money, but I think it’s a cool idea,” said Eric Barlow, owner of Eric’s Cycle Works, a bicycle shop in the village. “It’ll be good for a laugh. There are too many bad things going on in this world. Why not have some fun?”

Town resident Kathie Mann said the project is a “good idea” that will bring attention to Hamburg.

“People are painting murals on walls these days, making things look more colorful and decorative. I like it,” said Kathie Mann.

Her daughter, Andrea, said she wasn’t against the idea, but wasn’t thrilled by it.

The two Manns were interviewed as they waited for a table at one of their favorite restaurants in the village — the Juicy Burger Bar.

Watch now: Sean Kirst: At a high and icy corner of Highmark Stadium, the weather was just fine

Watch now: Sean Kirst: At a high and icy corner of Highmark Stadium, the weather was just fine

"We are addressing the situation to ensure this does not happen again," a Williamsville Central School District statement reads.

Get sick with Omicron and your symptoms might not feel 'mild.' What you need to know

“Omicron may be less virulent, but do not confuse it with the common cold virus that has almost no potential to cause lethal disease,” said Dr. Thomas Russo, an infectious disease specialist with the University at Buffalo Jacobs School of Medicine and Biomedical Sciences.

Deadbeat debt collector grilled in court: 'Information he wanted to withhold, he withheld'

A hearing was held Tuesday to determine whether Douglas MacKinnon should be sanctioned and even incarcerated for not fully complying with a government subpoena.

What to expect in the next 36 hours: Heaviest snows past, but winds will cause blowing, drifting

Blustery is the word for Martin Luther King Day, the National Weather Service says, and driving will be severely impacted.

Questions regarding Burstein's overtime are simple: How much overtime did she get paid? And is there anything wrong with her receiving that money? But getting true answers is tricky because of the political haze hanging over the conversation.

The debate over facts and freedom and rights and restrictions that has roiled the nation since the start of the Covid-19 pandemic has come to a one-square-mile community where complaining about traffic and parking used to rate as the biggest issue.

A new stadium in the wrong location will last for decades, which is bad enough, Rod Watson says. The erosion of public confidence may last even longer.

Dylan Cownie submitted this rendering for his vision of turning the Hamburg water tower into a giant hamburger.

Dylan Cownie with his winning design for turning the Hamburg Water Tower into a giant hamburger. (Dan Herbeck/Buffalo News)