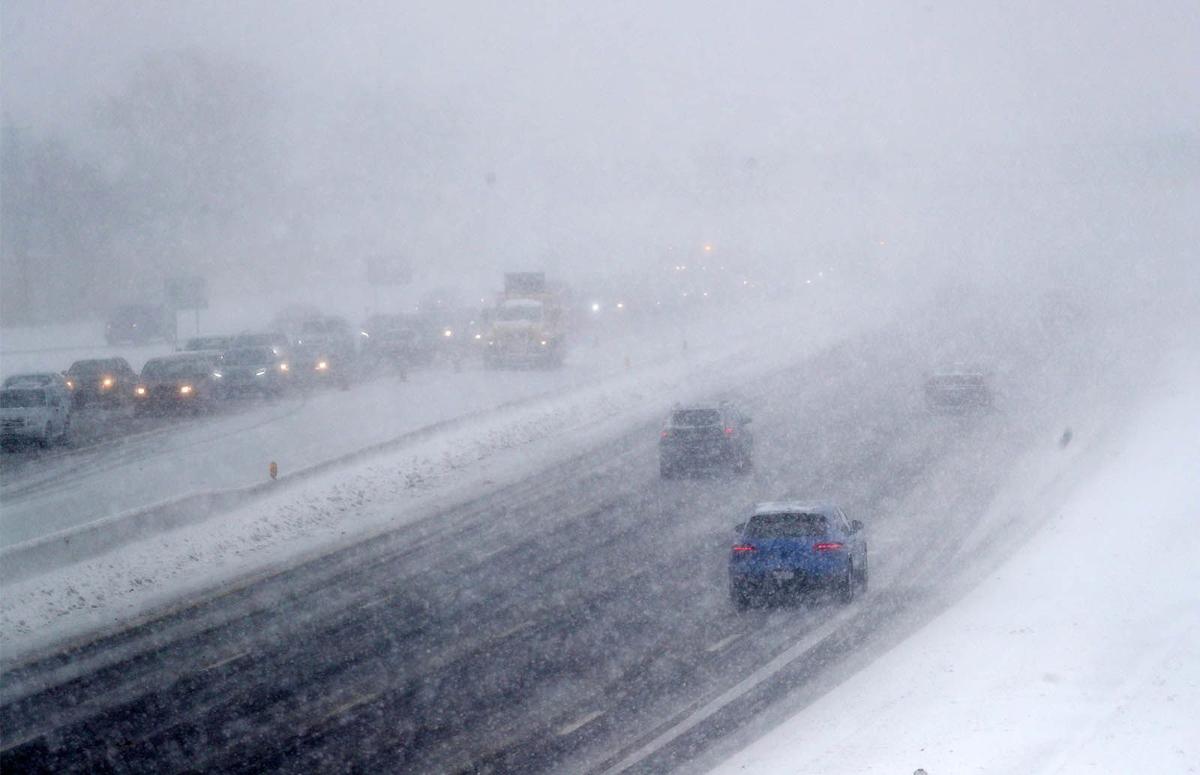 Traffic was backed up on I-90 on Jan. 2 as a result of the crash earlier in the day. (Sharon Cantillon/Buffalo News) 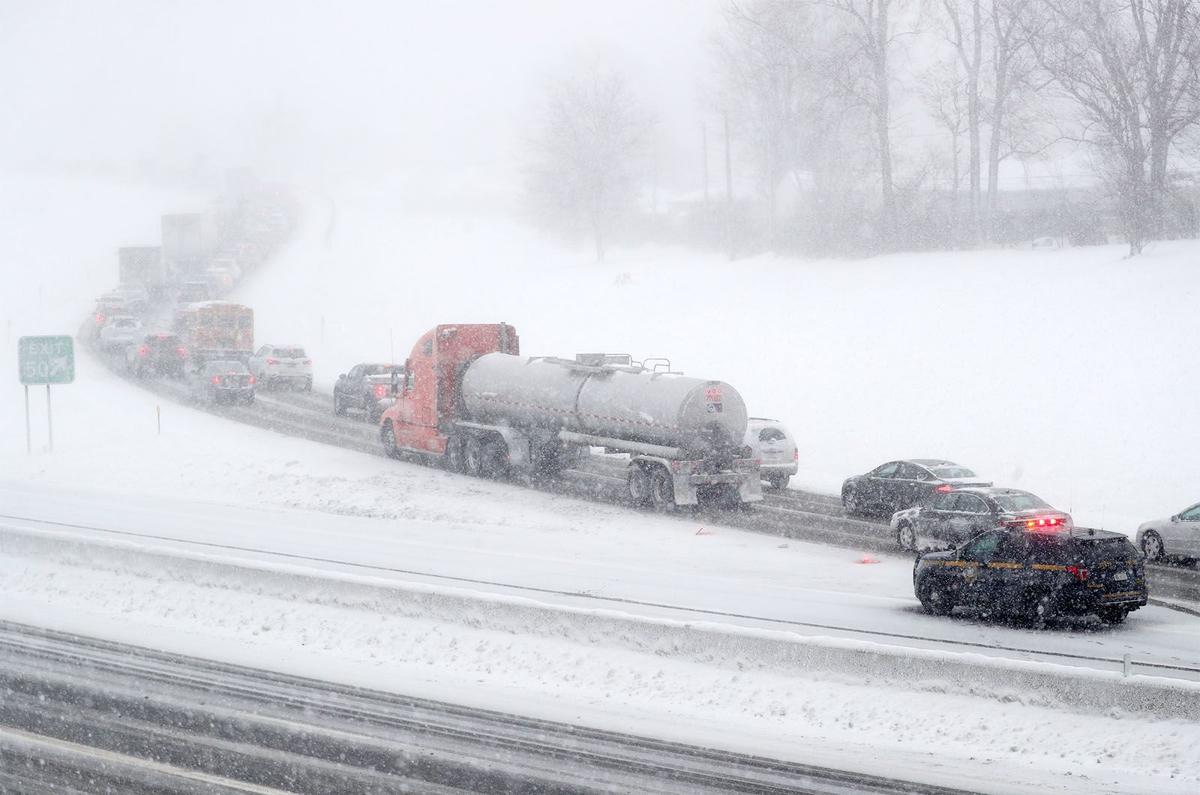 Traffic is being diverted from I-90 near the scene of the accident. (Sharon Cantillon/Buffalo News)

One person has died following a crash Tuesday that involved between 15 and 25 vehicles, according to State Police.

One other person was also seriously injured in the multivehicle pileup, said Trooper Michael P. Cassella, a public information officer with the State Police.

Several of those people involved in the accident — but who were not seriously hurt — were transported by buses to the Garden Place Hotel on Transit Road.

Among them were Kevin Gurusaran and Alexandra Burazor of New York City. The couple was returning home from a road trip to Toronto and were near the beginning of the pileup.

Gurusaran first saw the pileup in front of their vehicle. He hit the brakes, but was rear-ended by a tractor-trailer. Then other cars began crashing into their vehicle until Gurusaran headed for a ditch to avoid any more hits.

"When it was all said and done, there were miles and miles of crashed cars behind us," Gurusaran said.

"Literally, snow was coming sideways," Gurusaran said, describing the conditions. "It was clear that, all of a sudden ... there was a chain reaction going all the way down."

The couple was stranded on the I-90 for four hours before being taken to the hotel.

Lisa Grover, a resident of North Tonawanda, was still shaking nearly four hours after the accident. She also was angry because she said authorities should have shut down that section of the I-90 as the Skyway had been closed late Tuesday morning.

Grover recalled getting her ticket at the Williamsville toll barrier and then putting on her hazard lights as the weather conditions grew more blustery.

Suddenly, Grover saw two cars in a ditch and semitrailers off the road to both her left and right.

"I tried to stop. It seemed like I was going to stop, but I didn't," Grover said.

"I went into the ditch, but before that I hit a mile marker. It bounced off my windshield and went under my car," she said.

Grover had the vehicle for only two months. Two months ago, she had been rear-ended by another vehicle when she stopped to avoid hitting a dog.

As she waited to be rescued, Grover was invited to stay warm in a car with a woman from Rochester and her 5-year-old grandson.

"He was handling it better than any of us. He was just sitting there and singing songs," said Grover.

Matthew Yglesias from Columbus, Ohio, was a passenger in a vehicle that was headed for a skiing trip.

"There were no cars and, all of a sudden there was the dark outline of a truck in front of us," Yglesias said.

They swerved to avoid hitting another car and then were hit by several other vehicles in succession.

Blizzard warning in effect for parts of Erie County until 1 a.m.

Yglesias said he was jolted from the first hit and then felt the pain of his seat belt tightening. He offered praise for the rescue workers who arrived on the scene of the crash within 20 minutes.

"It was pretty scary. I got the wind knocked out me and I couldn't breathe ... It was pretty horrifying," Yglesias said.

Yglesias said he and his driving companion decided to cancel their ski trip for fear that they might have been more hit in the accident than they initially realized.

Multiple people had to be extricated from their vehicles, according to Erie County Executive Mark C. Poloncarz.

Bowmansville Volunteer Fire Chief Thomas Trzepacz and his department were the first responders on the scene. He said they extricated two critical motorists, from two separate vehicles that had been pinned in the crash.

A third critical patient was removed from the scene and later died, Trzepacz said.

Trzepacz said first responders worked in "zero visibility conditions" for three hours and had to trek about half a mile with their equipment to reach the most severe part of the nearly mile-long crash on the I-90 eastbound, until vehicles could be cleared.

He said there were "cars everywhere" in ditches and the center median and even a few cars off the road in the westbound lane.

"There were about 60 to 75 vehicles, not all involved (in the crash) but off the road," said Trzepacz. He said a dozen to 15 volunteer fire companies responded from Lancaster, Cheektowaga, Amherst and Clarence and about 60 to 70 rescue workers were working to clear the scene and help injured motorists.

"I've been dealing with crashes on the Thruway for 20 years, including critical ones, but I have never seen this many vehicles under these conditions," said Trzepacz. "We're always training for something like this and we did the best we could under the conditions."

All lanes of the eastbound mainline Thruway near Depew were closed due to the crash. The eastbound lanes on I-90 were blocked between the Depew and Pembroke exits, according to the state Thruway Authority. Eastbound traffic was being diverted at Exit 50. Westbound traffic had been reopened.

The crash, which happened east of the Williamsville tolls, means eastbound Thruway traffic coming through Cheektowaga had to be rerouted onto the I-290, according to the Niagara International Transportation Technology Coalition.

The eastbound lane was reopened to traffic at 10:30 p.m.

What to expect in the next 36 hours: Frigid temperatures, blizzard conditions

Erie County legislator 'resigns' and is reappointed to collect his pension

New York State retirement system laws prohibit employees on public payrolls from collecting their pensions while they are still on any government payroll.

Traffic was backed up on I-90 on Jan. 2 as a result of the crash earlier in the day. (Sharon Cantillon/Buffalo News)

Traffic is being diverted from I-90 near the scene of the accident. (Sharon Cantillon/Buffalo News)