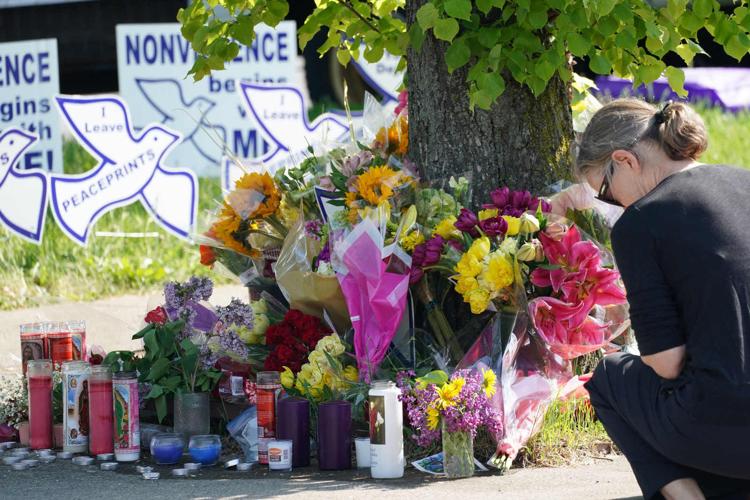 A makeshift memorial is set up Sunday outside the Tops Markets on Jefferson Avenue, following a shooting that killed 10 a day earlier. 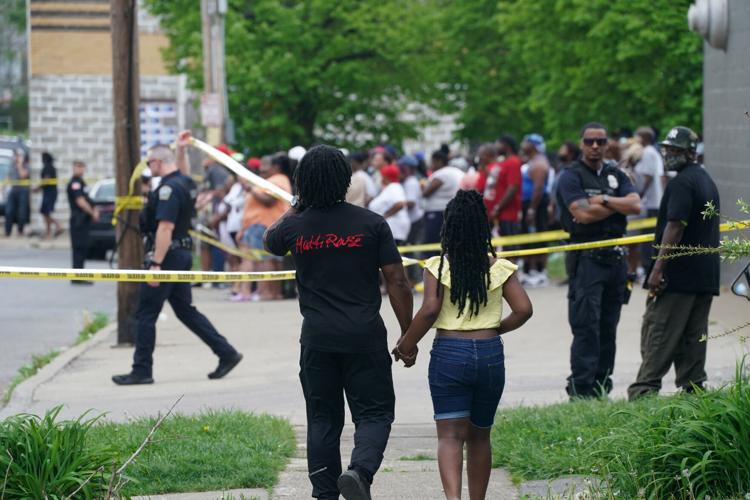 The scene outside the Tops Markets on Jefferson Avenue in Buffalo, where a shooter killed 10 on Saturday.

Support this work for $1 a month
Buffalo News Staff

Ten people were killed and three others were wounded Saturday at a Tops Markets on Jefferson Avenue in Buffalo in a racially motivated mass shooting. Here's what we know:

• The quick response of Buffalo Police may have prevented the death toll from surpassing the 10 victims, authorities said. But some in the community are questioning how the heavily armed gunman was able to peacefully surrender.

• Hundreds of people gathered in the street Sunday morning near the shooting scene for a prayer vigil that evolved into a Black Lives Matter protest and a rally against gun violence. (Video)

• A Tops employee who was in the store recounted the horrific scene. "I just keep hearing gunshots and just seeing the bodies," said the woman, who wished only to be identified by her first name, Latisha.

• Tops says that its Jefferson Avenue location will reopen. “Tops has been committed to this community and to the City of Buffalo for decades and this tragedy will not change that commitment,” a company spokesperson said.

• The News has identified five of those killed and one injured in the shooting. The dead include Aaron W. Salter, Ruth Whitfield, Katherine Massey, Roberta Drury and Heyward Patterson. The injured include Zaire Goodman.

• The Broome County neighborhood where accused shooter Payton Gendron comes from is a postcard of American small town living – but it's suddenly a focal point of the investigation into the shooting. "Stuff like this doesn't happen here," said Keri Mead, who lives a couple of blocks from the accused shooter's home.

• The FBI is asking anyone who has photos or videos related to the shooting to submit them to a newly created website for that purpose.

• Mental health counselors from an array of agencies will be available until 9 p.m. tonight at the Johnnie B. Wiley Center.

• "This is not the time to tear up our own community, because our community did not do this," True Bethel Bishop and Buffalo Common Council President Darius G. Pridgen told the congregation at his church. In a short, fiery speech at True Bethel Baptist Church on Sunday, Gov. Kathy Hochul decried the influence of racism and white supremacy on social media in the motives for the attack. "Lord, forgive the anger in my heart right now," she said. (Video)

• The Sunday morning scene outside the Tops included a makeshift memorial and elected officials.

More of what we know:

• A government official told The Buffalo News that the semi-automatic gun that Gendron used in the shooting had “the N-word” spelled out in white paint on the barrel, and also the number 14. The official said “14” refers to a 14-word statement that is popular with white supremacists.

• The gunman streamed some or all of the shooting in a live video online, authorities said. Still images and video clips purportedly showing portions of the shooting had circulated on social media in the hours after the horrific mass shooting.

• Four people were shot in the Tops parking lot, three killed and one injured, before the shooter entered the store, Buffalo Police Commissioner Joseph Gramaglia said. Inside the supermarket, several other victims were found, two sources said, and some of the deceased appeared to be hiding near cash register lines.

Ten people were killed by a gunman dressed in body armor and armed with a high-powered rifle, while three others were wounded – two of them cr…

• Four store employees that were shot included a security guard who confronted the gunman, who was protected by body armor, Gramaglia said. The security guard, who was killed, was retired Buffalo police officer Aaron Salter.

• The shooter was taken into custody and placed in a police vehicle at the scene, according to the two sources. The shooter was cloaked in body armor and had a military grade helmet on his head.

• Shonnell Harris, an operation manager at the Tops, said she heard gun shots and ran frantically through the store, falling several times before exiting out the back. She saw the shooter, whom she described as a white man wearing camouflage. "He looked like he was in the Army." Harris thought she heard 70 shots. Transmissions on police radio described a grim scene.

• A worker in the dairy-frozen department at the Tops store said he walked into the cooler to stock milk about three minutes before the shooting. The worker hid there when the shooting began and more people joined him, he said.

Coverage of this story is being provided free to all readers. Please support our journalism and the newsroom providing this coverage by subscribing to The Buffalo News.

"We are shocked and deeply saddened by this senseless act of violence and our thoughts and prayers are with the victims and their families," Tops Markets said after a shooting at its Jefferson Avenue supermarket on Saturday afternoon left 10 people dead and three wounded.

The FBI is asking anyone who has photos or videos related to the mass shooting at Tops Market on Jefferson Avenue in Buffalo Saturday to submit them to a newly created website for that purpose.

People can upload photos, videos and tips to www.FBI.gov/Buffaloshooting.

Mental health counselors from an array of agencies will be available until 9 p.m. at the Johnnie B. Wiley Center, 1100 Jefferson Ave., following the mass shooting at the Tops Market on Jefferson Avenue on Saturday.

They were just doing ordinary things on a beautiful summerlike spring day, until a man armed with a high-power rifle drove three hours to Buffalo and killed them one by one in the parking lot and then inside the store. Here are their stories.

From the accused shooter's hometown: prayers and bewilderment

Residents of Conklin said they were shocked to learn that the 18-year-old accused of "pure evil" in the racist mass killing at a Buffalo Tops supermarket is from their town.

A makeshift memorial is set up Sunday outside the Tops Markets on Jefferson Avenue, following a shooting that killed 10 a day earlier.

The scene outside the Tops Markets on Jefferson Avenue in Buffalo, where a shooter killed 10 on Saturday.