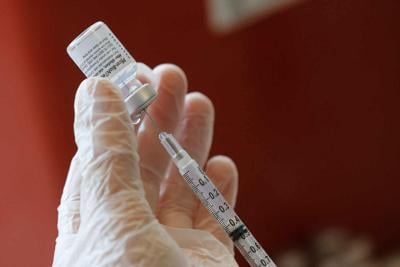 University at Buffalo officials said this week that 99% of students are fully vaccinated or within days of being so, and vaccination rates are 80% or higher on several other campuses – well above rates for the general population in Western New York and across the state.

Area colleges and universities also are insisting that everyone wear a mask inside campus buildings, regardless of their vaccination status.

Unlike last fall, when higher education officials took dramatic steps to limit the amount of people on campus, including flipping many courses to online instruction, most campuses are returning to pre-Covid capacity levels.

Austin Wolfgang, a junior from Albany, couldn’t wait to get back into a classroom again after taking all his courses online last year.

Wolfgang nearly took a break at the end of the fall 2020 semester from working toward bachelor’s degrees in criminology and political science.

“I actually was thinking about just taking a semester off until we came back in person, because I was not enjoying online classes,” he said. “In person is definitely better, and even just the feeling of being on campus – that’s a huge part of college and feeling at home at college. I think a lot of people struggled with that.”

Wolfgang said the clubs he’s involved with – Mock Trial and Tae Kwan Do – met through video teleconferencing, “but it wasn’t nearly the same.”

And he ventured onto campus only a few times, to study or for student government work.

“It was like a ghost town,” he said. “You went from having thousands of people here every day to a couple hundred.”

SUNY Chancellor Jim Malatras said pushback against the vaccine mandate has been minimal, and he hasn’t seen any data suggesting students fled SUNY colleges and universities because they did not want to be vaccinated.

“Anecdotally, there’s been a handful of cases that we’re aware of,” he said.

SUNY data suggests students dropped out last semester because they were unable to have a more robust in-person experience that vaccine availability now allows, he added.

“The more restrictive environment was keeping people from enrolling again,” he said. “We have not seen the erosion of enrollment because of the vaccine.”

The three other SUNY university centers – Stony Brook, Binghamton and Albany – also had vaccination rates of 95% or better among students.

About 400 UB students are still unvaccinated, with exemptions for religious or medical reasons. They will be tested weekly for Covid-19. The university this week de-enrolled 83 students who did not apply for a vaccine exemption or submit proof of vaccination.

By SUNY requirement, students at public colleges and universities across the state, including community colleges, have until Sept. 27 to be fully vaccinated. SUNY can’t unilaterally require vaccinations for staff and faculty and would have to negotiate a mandate with collective bargaining units. UB officials said at least 70% of all employees and staff were fully vaccinated.

At SUNY Buffalo State, 90% of residential students and 73% of commuter students so far have submitted proof of full vaccination, said President Katherine S. Conway-Turner. The college is still sorting through applications for vaccine exemptions, but Conway-Turner said, “I think we’ll land, even with exemptions, at a very high rate.”

With a few exceptions, distancing requirements have been removed, along with other restrictive precautions on such things as building access and egress and large gatherings.

Music, dance and theater performances are returning to the SUNY Fredonia campus after more than 18 months, said President Stephen H. Kolison Jr., who anticipates full compliance with the vaccine mandate by the deadline.

“I think we are probably around 70% already,” he said.

Erie Community College and Niagara County Community College were struggling to keep pace with four-year colleges, but officials at both institutions said they believed it was more an issue of students properly filing proof of vaccination with the college than it was reluctance to get a vaccine.

“Yes, I’m concerned but I think we have plenty of opportunity to get those numbers where they should be,” said Reuter. ECC begins classes on Tuesday, and many community college students tend to enroll at the last minute, he said.

At NCCC, the vaccination rate for students was 42%, said Wayne Lynch, vice president of administration. The SUNY mandate took effect Aug. 23, when the Food & Drug Administration granted final approval for the Pfizer vaccine, so the numbers of vaccinated students at NCCC should begin rising rapidly by mid-September, said Lynch.

Across the country, more than 1,000 colleges and universities are now requiring that students get vaccinated against the Covid-19 virus, according to the Chronicle of Higher Education, which tracks vaccine mandates.

No mandate at some private colleges

Some Western New York private colleges and universities have mandated Covid-19 vaccines for students and employees, while others have resisted imposing a requirement.

Hilbert College in Hamburg, which announced its vaccine requirement in June, now has 88% of the entire campus community vaccinated, including students, faculty and staff, said Christopher Siuta, the college’s director of counseling, health and wellness. That could reach 90% with a few more vaccinations, he added. The remaining 10% were exempted for medical or religious reasons, said Suida.

“Somewhere between 70% to 80% within a larger group, you’re looking at a very solid immunity against Covid,” he said. “We’re definitely above that. Most higher eds are in the 80s, low 80s, so we’re definitely ahead of that curve.”

Daemen College in Amherst didn’t require the vaccine and achieved similar results as Hilbert, with 83% of students and 87% of faculty and staff reporting that they are fully vaccinated. And those numbers are likely to increase within the next few weeks, said Greg Nayor, vice president for strategic initiatives.

Unvaccinated students face restrictions. Athletes can’t travel to away games and must wear masks during practices and get tested three times per week. Students who live on campus will be placed in special housing and cannot host guests.

Nayor said he is confident in the college’s planning and preparation to prevent Covid outbreaks on campus but acknowledged the virus remains capable of outmaneuvering even the best planning.

“There’s a piece of luck involved in this too,” he said.

Canisius College also did not mandate the vaccine, but President John J. Hurley said college officials may reconsider in the coming weeks. About 80% of 1,800 undergraduate students living on campus have provided proof of their vaccinations, said Hurley.

The number should be higher, he said.

“I’m troubled by some of the communications I’m getting from parents and students about resistance to the vaccine,” he said.

Niagara University informed students, employees and vendors in August that anyone on campus would need to be vaccinated by Oct. 1. For those doing a two-shot protocol, the deadline to get the first shot is Friday, said Niagara spokesman Thomas Burns.

The university was hosting vaccine clinics Thursday and Friday to make it easy for anyone to get a shot, Burns said.

In Clarence, many voices on mask mandate: Parents. Doctors. A man charged in Capitol riot.

Although those opposed to the mask mandate appeared to be in the majority, they were not unchallenged by other parents who supported the mandate.

It marks the first time that the state’s Hero Act will be used to combat the highly contagious virus, according to Gov. Kathy Hochul.

Students must be fully vaccinated by Jan. 18, the start of the spring semester. 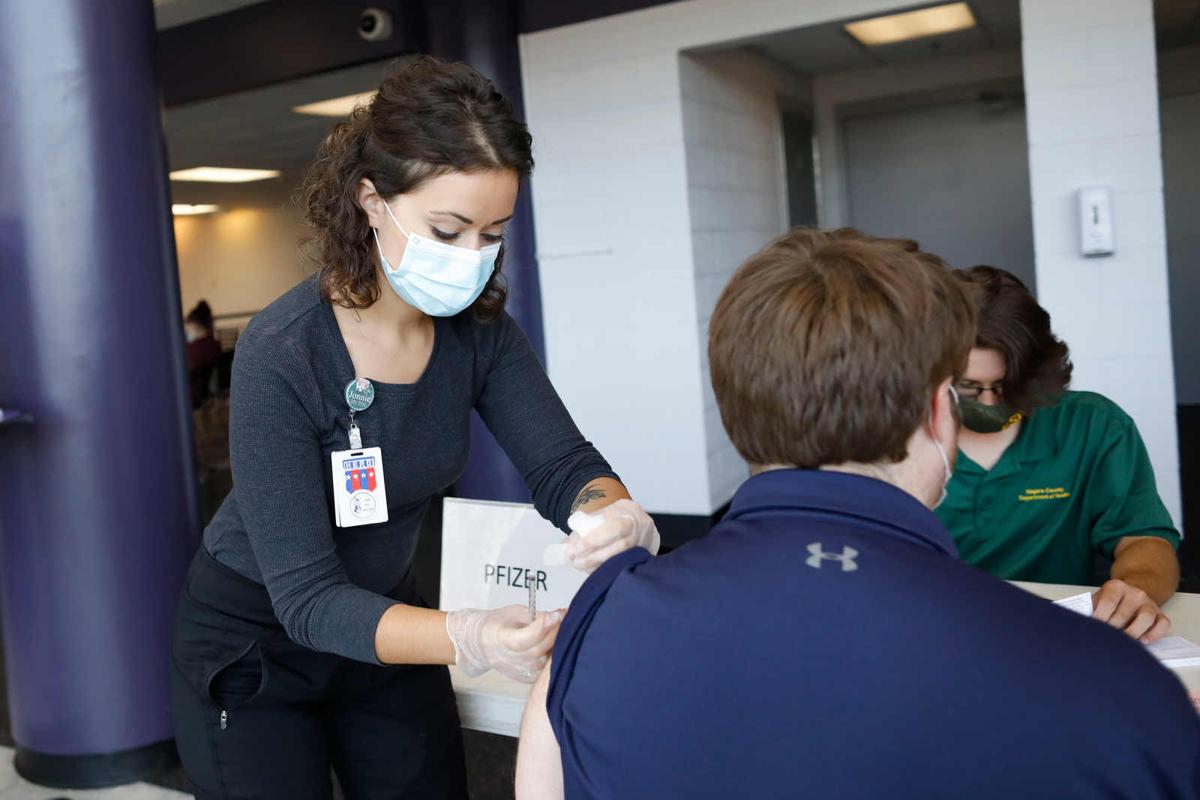 Nurse Jonnie Fabrizio administers a first dose of the Pfizer vaccine to a student during a Covid-19 vaccination clinic held by the Niagara County Department of Health at Dwyer Arena on the Niagara University campus in Lewiston. 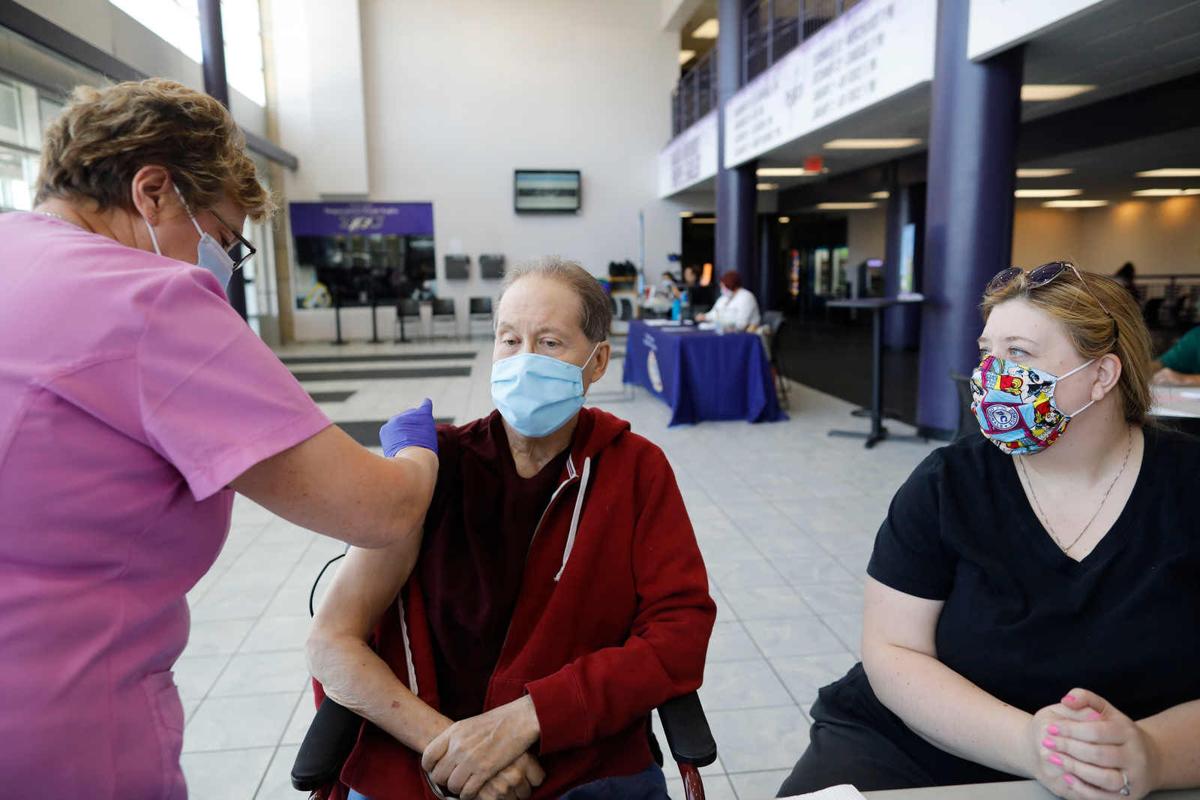 Public Health Nurse Beverly Lawler gives a third dose of the Moderna vaccine to David Lee of Lockport as Rebecca Stear looks on after getting hers during a Covid-19 vaccination clinic held by the Niagara County Department of Health at Dwyer Arena on the Niagara University campus in Lewiston. 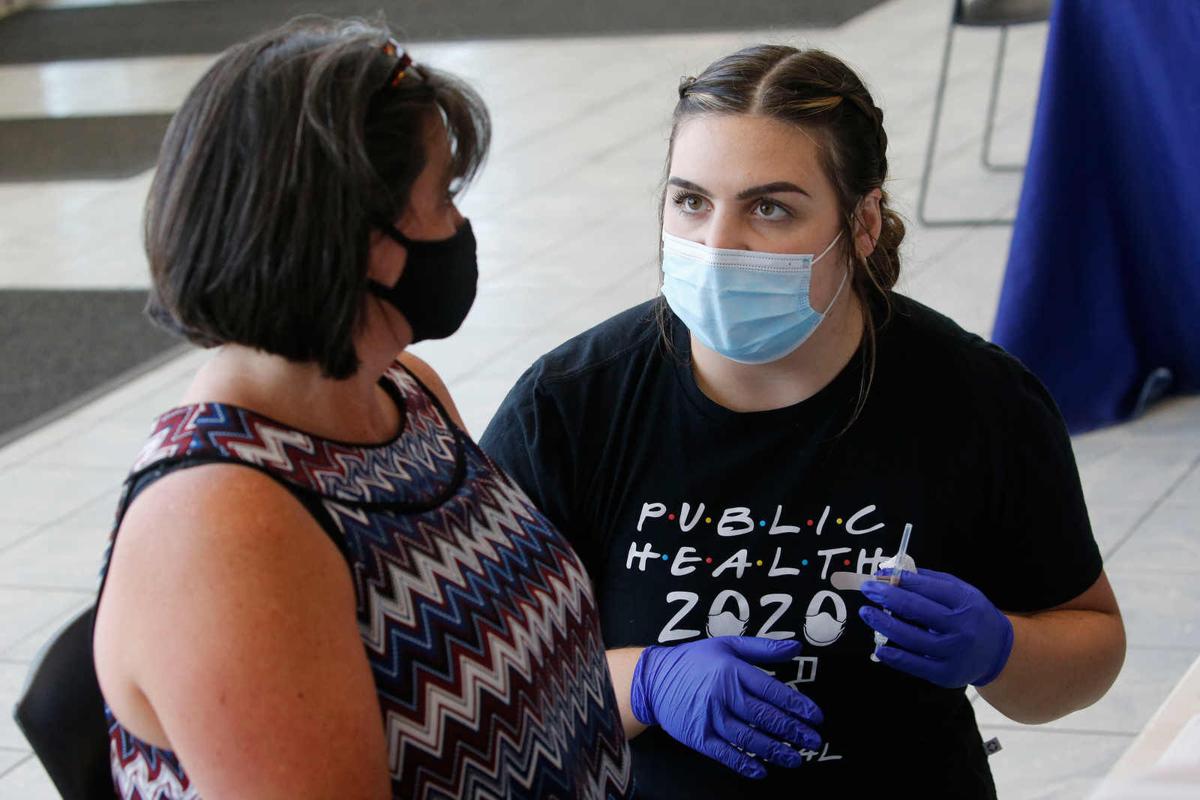 Laura Holthouse, left, who works in the nursing office at Niagara University, gets her first dose of the Pfizer vaccine from former student, registered nurse Taylor Tubinis who works as a public health nurse for Niagara County after graduating from NU in 2019. 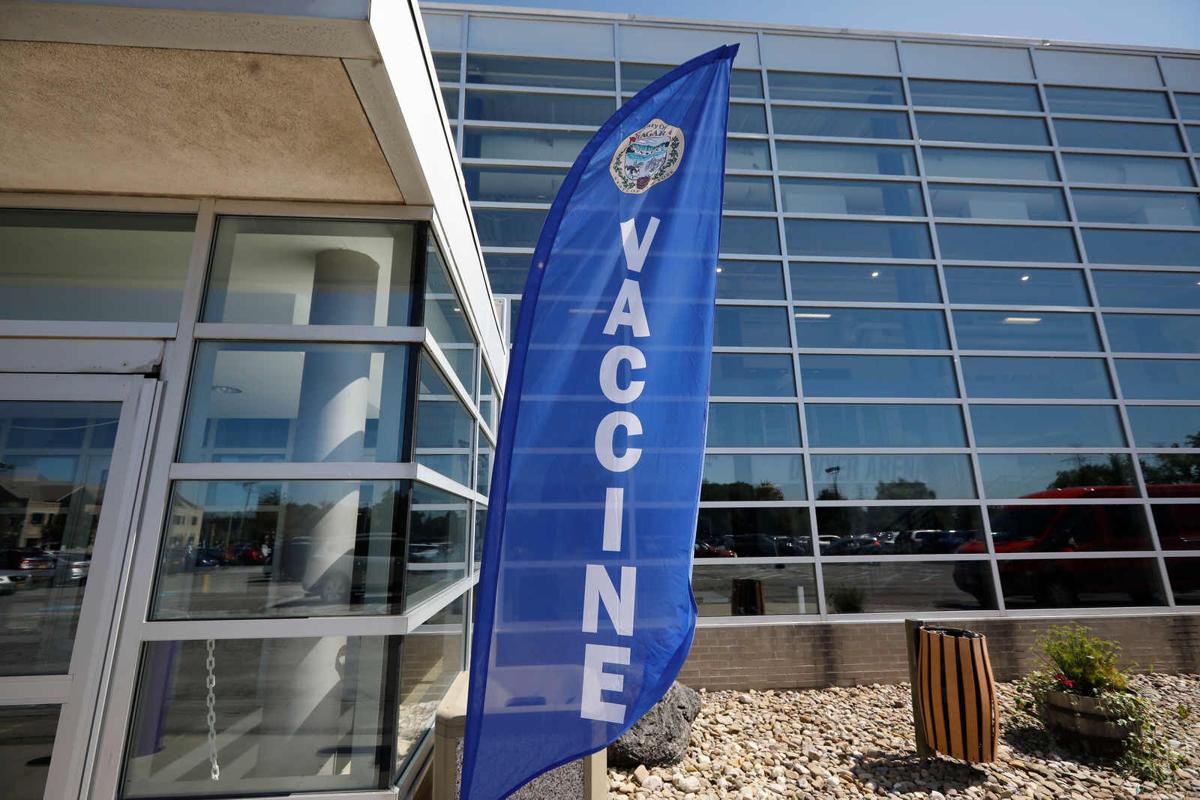 A flag advertises a Covid-19 vaccination clinic held by the Niagara County Department of Health at Dwyer Arena on the Niagara University campus in Lewiston.