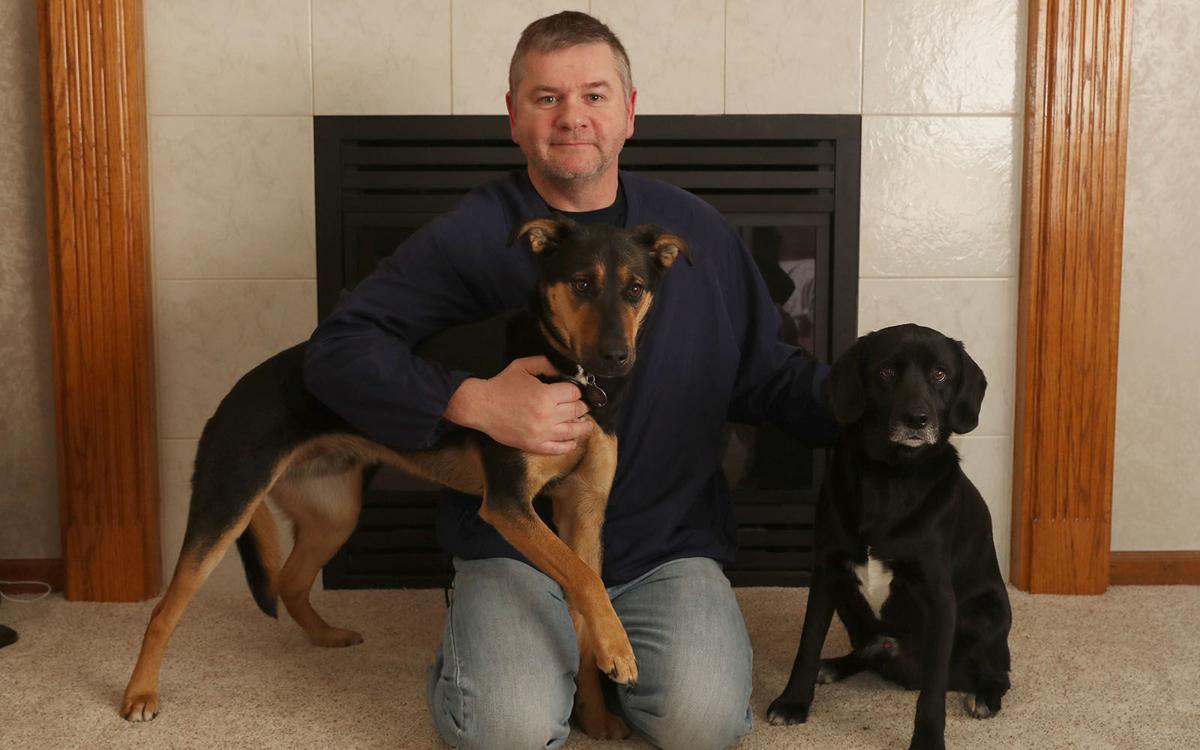 Don Chatten rescued a stranger's dog from the icy waters of the Tonawanda Creek on Thursday. He credits his two rescue dogs, Duke, left, and Milo for helping him find the dog who went missing in Ellicott Island Bark Park. (Sharon Cantillon/Buffalo News) 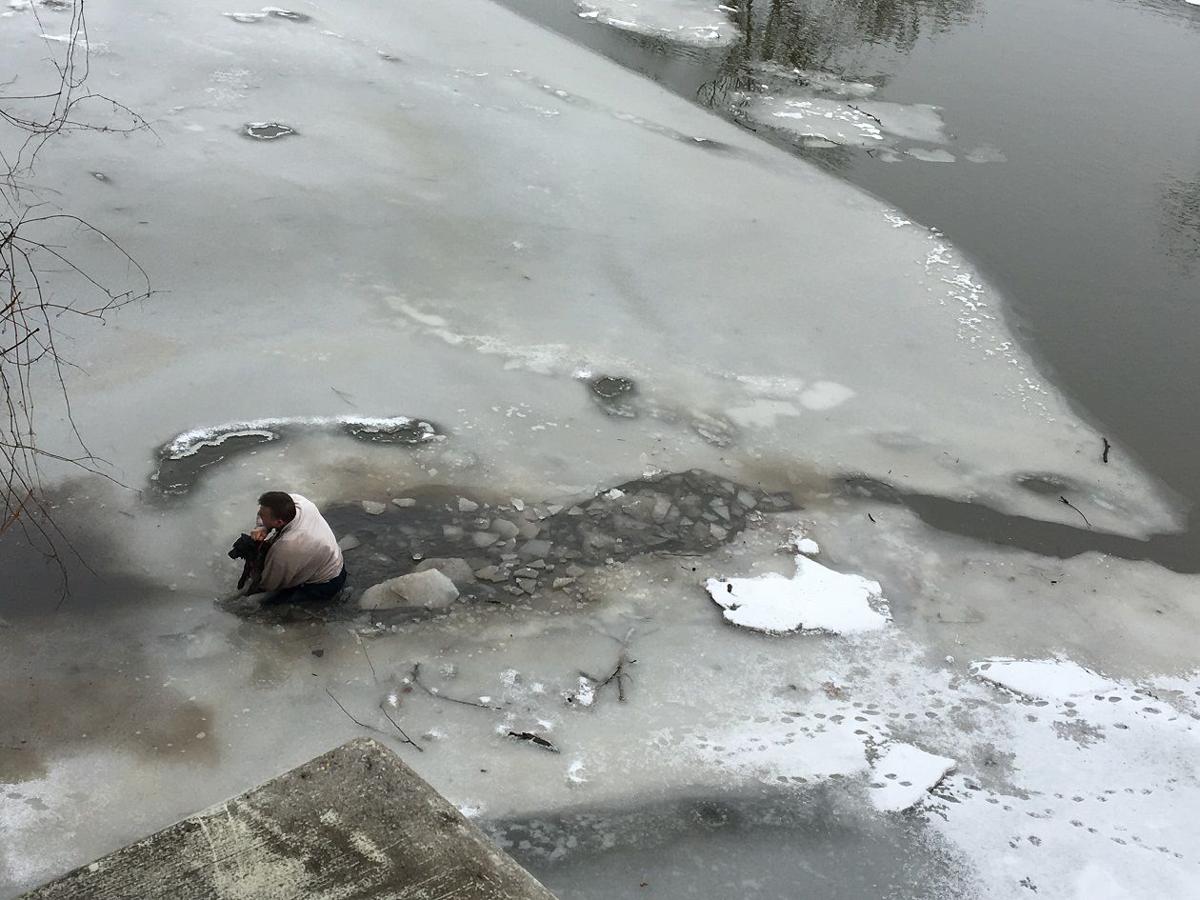 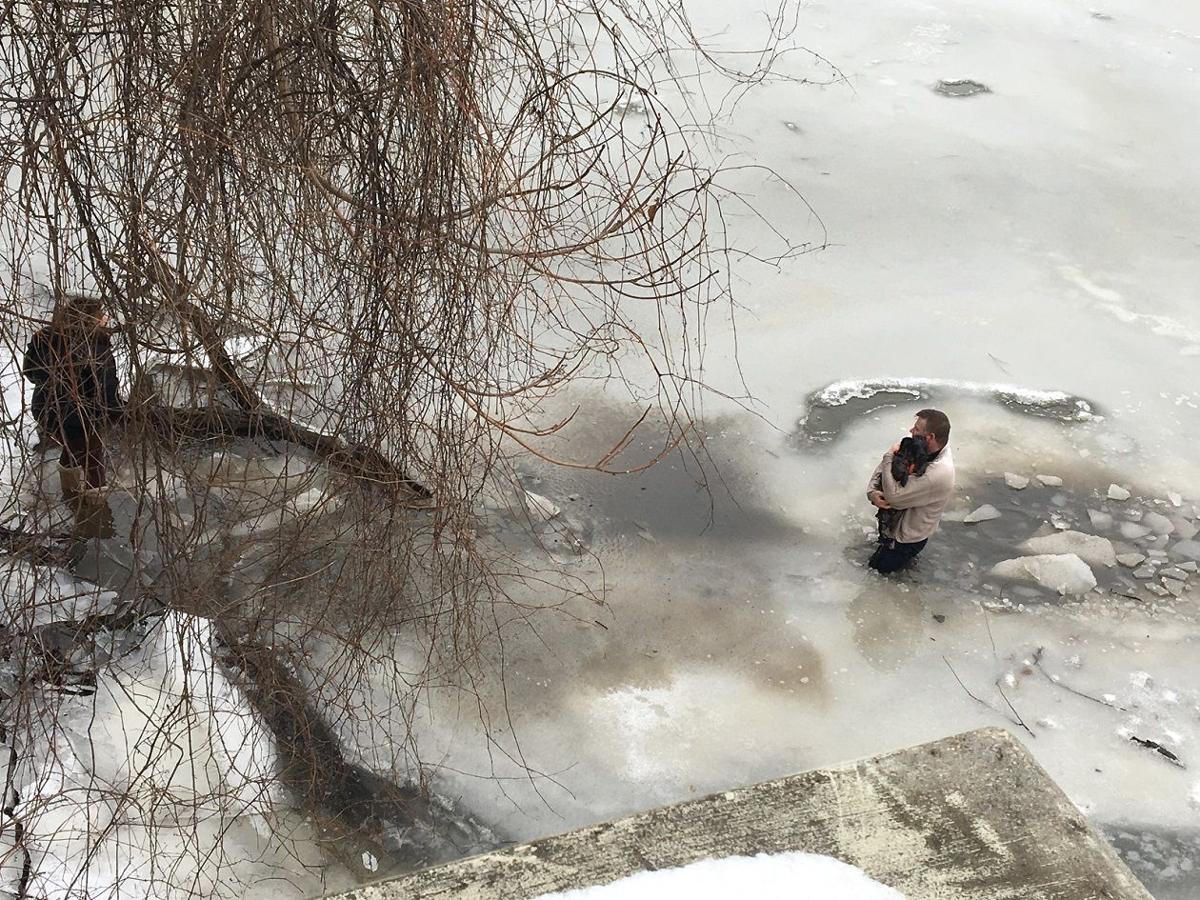 Don Chatten went into Tonawanda Creek to save a stranger's dog. (Photo courtesy of Samantha Kelly)

Don Chatten says he knew what he had to do.

A stranger's small gray terrier fell into the icy waters of Tonawanda Creek near the entrance to Ellicott Island Bark Park in the Town of Tonawanda.

Chatten, who believed the dog wouldn't survive long, walked into the frigid creek to rescue the pet.

The rescue happened around 3 p.m. Thursday.

Chatten, a Wheatfield resident who works as a truck driver for The Buffalo News, was at the park to walk his dogs. It's a spot they visit a couple of times a week. As he was getting ready to leave, a man approached him and asked if he had seen his dog. The two men split up and searched.

After about 10 minutes, Chatten hadn't spotted the dog and assumed the owner found his missing pet. Getting ready to leave the park again, Chatten's two dogs stopped near the foot of a pedestrian bridge. Chatten didn't see anything. He thought his dogs were reacting to a bird or a duck.

So they started walking, but the dogs stopped again.

That's when he heard a faint whimper.

"They pretty much told me something was down there," Chatten said of his dogs, Milo and Duke.

That's when Chatten and Balicki maneuvered down the creek bank. Chatten handed Balicki his wallet, cellphone and keys, along with his flannel shirt. Then he went into the water.

Chatten said he wasn't sure how long the dog had been in the water. By the time any emergency responders would arrive, he thought it might be too late.

Some of the ice appeared to be 6 to 8 inches thick. Chatten, who had been coming to the dog park for several years, knew the water was shallow. He said he knew he wouldn't be in that much danger if he went in the water. Chatten, who grew up in the City of Tonawanda, swam in the Niagara River as a youth. He said he used to "jump icebergs" in the river in April, when the ice boom was removed.

The risk in Tonawanda Creek would have been higher if the waterway was completely covered in ice, he said.

Chatten took the initiative, said Balicki, who was at the park with her dog, Gio.

"Not many people would jump in for someone else's dog," Balicki said. "He just saw a situation, and he just handled it."

Chatten used his forearm to break up some of the ice in order to get to the dog, who is named Jackson, Balicki said.

"I'm just glad it wasn't a Saint Bernard," he said.

After reaching the dog and hoisting it out of the icy creek, Chatten took a slightly different path back to shore, and that required breaking up more ice. It was difficult to get out of the water, he said, so Balicki came into the water and Chatten tossed the dog to her.

"Once my adrenaline was going, it wasn't too bad," Chatten said of the icy water. On his way back to shore, he started having some slight trouble breathing, he said.

Samantha Kelly of Kenmore, who was at the park with her dog, Harley, captured the rescue with her camera. She was crossing the bridge into the park when she saw Chatten already in the water.

The dog had its paws in the ice, with only its paws and head above water.

"It was hanging on for dear life," Kelly said.

Kelly watched Chatten smash his way through the ice, getting both into and out of the water.

"He was calm and confident," she said.

Chatten said he was concerned afterward about the dog's condition. He has been told the dog survived and was released from a veterinary clinic on Friday. He said he hasn't yet spoken with the dog's owner, but has been told the man asked for his contact information.

Chatten said he's not a hero. It's his dogs, who are both rescues, who deserve the credit, he said. Duke came from Puerto Rico after the recent hurricanes, while Milo came to Western New York from West Virginia.

If not for them, he said, he wouldn't have seen the dog in the water.

"I just did the grunt work," he said.

Don Chatten rescued a stranger's dog from the icy waters of the Tonawanda Creek on Thursday. He credits his two rescue dogs, Duke, left, and Milo for helping him find the dog who went missing in Ellicott Island Bark Park. (Sharon Cantillon/Buffalo News)

Don Chatten went into Tonawanda Creek to save a stranger's dog. (Photo courtesy of Samantha Kelly)