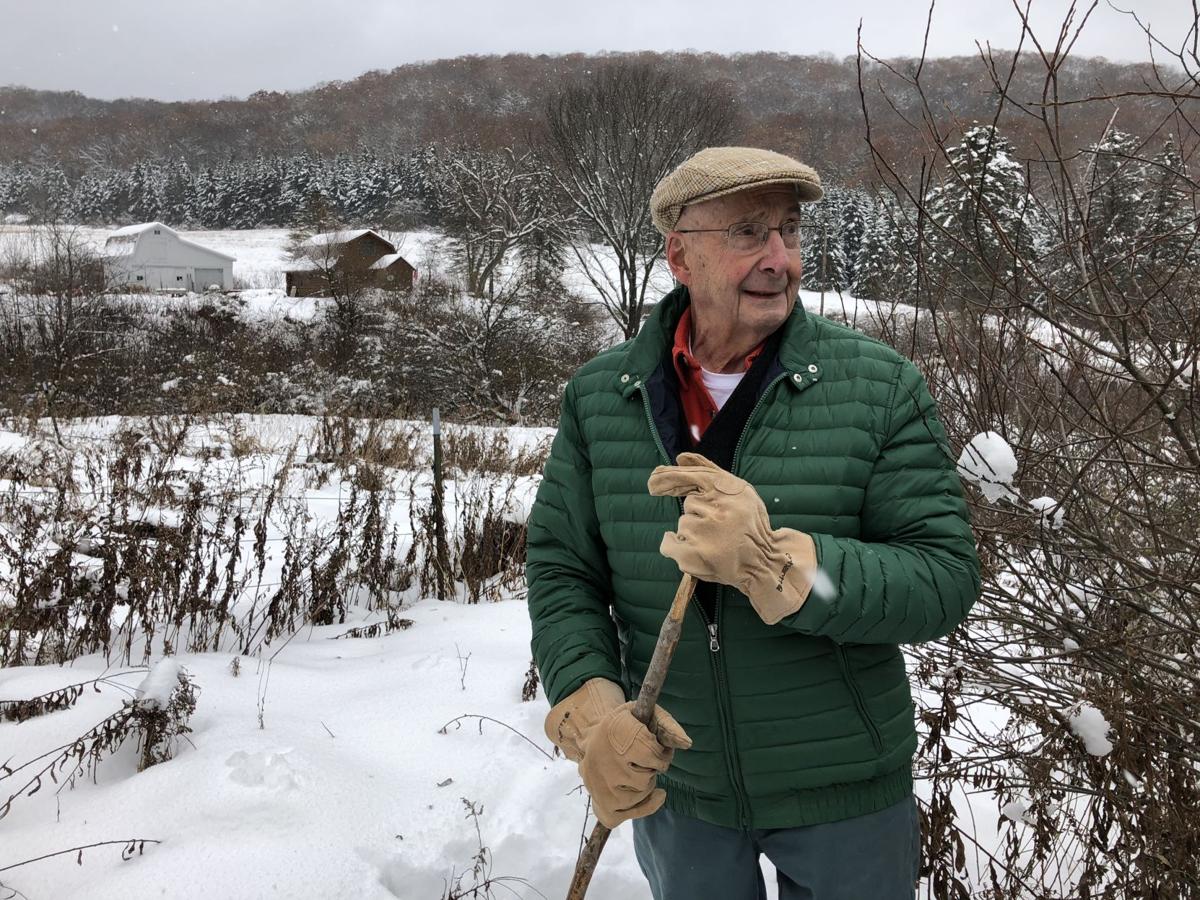 Joseph Schueckler of Cuba overlooks the trees and hills at a 200-acre property he and friends first purchased in 1963 through which National Fuel Gas Corp. seeks an easement by eminent domain to construct its proposed Northern Access Pipeline. (T.J. Pignataro/Buffalo News) 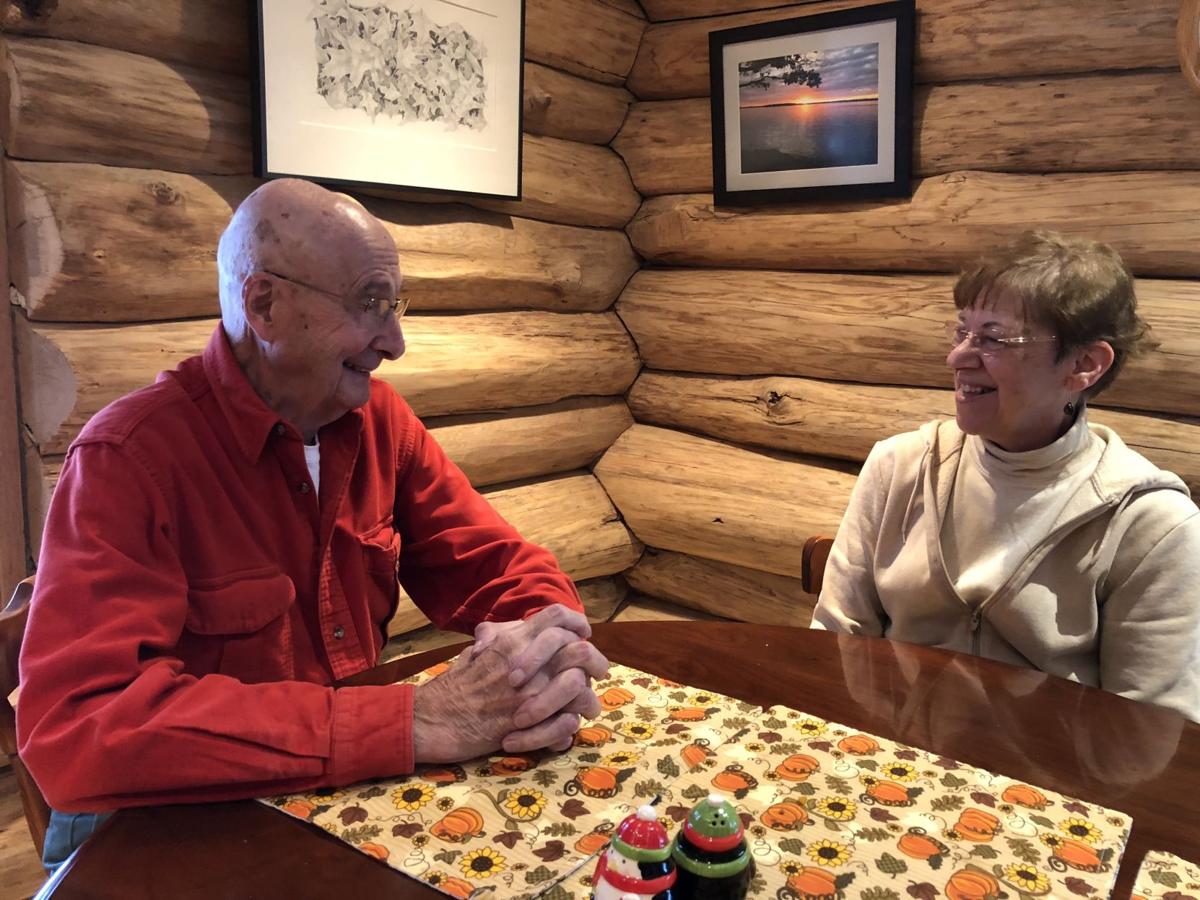 Joe and Theresa Schueckler talk about their victory at the state Appellate Division on Wednesday inside the log cabin that took Mr. Schueckler four years to build out of 120 oak trees on his 200 acre Allegany County property. (T.J. Pignataro/Buffalo News)

Joseph and Theresa Schueckler couldn’t understand how their land could be taken from them for a project that wasn’t even approved.

It was bad enough, the couple thought, to lose a portion of their Allegany County hillside forest and pasture to make way for a natural gas pipeline they philosophically opposed. But they still faced losing their land even after the state Department of Environmental Conservation denied a permit for the pipeline last year after ruling the project couldn’t be built safely.

The state's decision didn't stop National Fuel Gas from using eminent domain to obtain easements for the project from landowners who didn't want to sell.

So, the Schuecklers went to court. They lost their first round in state Supreme Court. But earlier this month they were successful in their appeal before the state appellate court in Rochester.

“This appeal ... presents a novel question of condemnation law,” Patrick H. NeMoyer, associate justice for the appellate division, wrote in the majority opinion. “Can a corporation involuntarily expropriate privately-owned land when the underlying public project cannot be lawfully constructed?”

NeMoyer wrote, “We answer that question firmly in the negative.”

The case could have ripple effects on a half-dozen or so other similar lawsuits pending by landowners against National Fuel in Erie and Cattaraugus counties.

National Fuel seeks to build a 97-mile Northern Access Pipeline connecting Pennsylvania shale gas country to an eventual hub in Ontario to help it export natural gas across the continent. The pipeline would enter New York State southeast of Olean and chart a northward track through Allegany and Cattaraugus counties, entering Erie County in Sardinia and connecting with an upgraded compression station in Porterville.

The pipeline would cut through some 190 creeks and streams.

The potential environmental effects prompted the DEC in April 2017 to deny National Fuel a water quality certification needed for the project.

“DEC’s denial was based on our determination that construction of this project would not meet state water quality standards, including its failure to avoid adverse impacts to wetlands, streams, fish and other wildlife habitat,” the DEC told The Buffalo News this week.

In its 3-2 decision, the appellate court didn’t rule on the environmental merits, only whether National Fuel’s right to an easement under eminent domain law remains in force even if its project is not.

“When the public project cannot be legally completed, any eminent domain power in connection with that project is necessarily extinguished,” the majority ruled. “To say otherwise would effectively give a condemnor the power to condemn land in the absence of a public project and that would violate the plain text of the state Constitution.”

Consequently, National Fuel has no right to force the Schuecklers "to sell something that is not for sale," the appellate court said.

The Schuecklers have invested their time and talents well over the decades.

“This is where we wanted to be. It has been my life,” Joseph Schueckler, 81, said of the land.

He and three buddies first threw in to buy some 200 acres as a getaway hunting camp in 1963.

He spent most of his career as a laboratory technician at several Buffalo hospitals. Mrs. Schueckler worked as a counselor.

They lived in Buffalo’s University District until moving to Clarksville in the 1980s.

One by one, his buddies sold their interests in the property to the Schuecklers.

Over the years, Joseph Schueckler, a master gardener and forester, has planted an estimated 8,000 trees and built his own log cabin home using some 120 of the property’s red and white oaks. He's also used the land to grow hay and raise cattle, documented dozens of tree species and spent time watching native fox, deer, porcupines, bear and other wildlife.

“It has to do with the rights of human beings,” Joseph Schueckler said. “I feel like someone’s come in here and opened up my refrigerator.”

He regards himself as a naturalist who’s kept the land pure to increase wildlife habitat and promote clean water and air.

“Cutting a path (for a pipeline) 200 feet long through a bio-diverse system?" he asked. "It’s called fracturing bio-diversity.”

The Schuecklers said they’ve been offered a lot of money to sign the contract with National Fuel.

They found bigger reasons not to.

The pipeline would carry gas obtained from deep-well hydraulic fracturing in Pennsylvania.

“The way we understand it is it pollutes the water and the air and it brings radioactive materials out of the ground,” Joseph Schueckler said.

That became part of their calculus when they turned down the offer, took National Fuel to court and then appealed to the appellate court.

“We were going along with it at the beginning. We thought if it was for the good of people, we’d go along with it,” Theresa Schueckler said. “The more we heard and the more we researched, we said, ‘Absolutely, this is not right. This shouldn’t happen.’ ”

She added: “We are all for clean water and clean air not just for us, not just for our children or grandchildren, but for future generations. We have to take care of this earth."

Even with the appellate decision, there are avenues for the pipeline to get built.

Most of them involve legal proceedings, including an appeal to the state Court of Appeals in Albany.

National Fuel told The Buffalo News it is considering its legal options. It has until Dec. 9 to appeal.

The company won a decision in August from the Federal Energy Regulatory Commission, which ruled the DEC waived its authority to deny National Fuel’s water quality certificate by not issuing a timely decision. FERC initially approved the pipeline project before the DEC denied it. The DEC seeks a rehearing with FERC on that decision.

“DEC is taking all appropriate legal action to defend our sensible decision, and will continue to strongly and forcefully defend our authority to protect the New York State’s water quality resources,” the agency told The Buffalo News this week. “DEC is also seeking to ensure that construction of this project does not begin while awaiting appeal.”

Diana Strablow of the Sierra Club Niagara Group called FERC’s steadfast support for the pipeline a threat to the state’s sovereignty on environmental issues.

“It’s outrageous,” Strablow said. “It would take away New York’s right to regulate our waterways under the Clean Water Act.”

The Schuecklers' land is one of five properties along the pipeline route that remain unresolved for National Fuel. Another is on Lia Oprea’s 183 acres in Sardinia at arguably the pipeline’s most significant water crossing: Cattaraugus Creek.

The Cattaraugus Creek watershed is marked as a single-source drinking water aquifer for a 325-square-mile area across southern Erie County and the Southern Tier.

Oprea, whose eminent domain case remains unsettled in state Supreme Court in Erie County, thought the issue went away with the DEC’s 2017 decision.

Those battling National Fuel hope the appellate court’s decision influences the other courts.

“With this case, it certainly seems likely they would rule this way in any other cases,” Strablow said.

“It is very encouraging,” Oprea added. “The one thing Joe Schueckler’s case did do is really boost the rest of us. Boost our morale.”

Joseph Schueckler of Cuba overlooks the trees and hills at a 200-acre property he and friends first purchased in 1963 through which National Fuel Gas Corp. seeks an easement by eminent domain to construct its proposed Northern Access Pipeline. (T.J. Pignataro/Buffalo News)

Joe and Theresa Schueckler talk about their victory at the state Appellate Division on Wednesday inside the log cabin that took Mr. Schueckler four years to build out of 120 oak trees on his 200 acre Allegany County property. (T.J. Pignataro/Buffalo News) 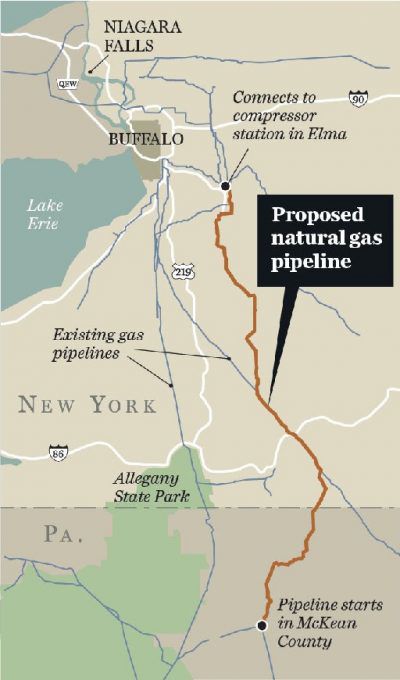