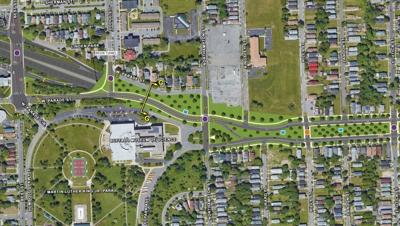 The estimated $1 billion Kensington Expressway tunnel and related roadwork would be one of the most complex projects the state Department of Transportation has ever undertaken – but the likely plan is less ambitious than Gov. Kathy Hochul has at times indicated when discussing the project.

A deck of greenspace would cover the tunneled expressway for three-fourths of a mile between Dodge and East Ferry streets. The project area would then extend south past Dodge to Best Street, according to a recent scoping session by the Department of Transportation.

The project's benefits to neighborhoods long separated by the current stretch of Route 33 "will be generational," state Transportation Commissioner Marie Therese Dominguez said in a statement.

But the project envisioned now also could foster false expectations among some, since it doesn't restore Humboldt Parkway from Delaware Park to Martin Luther King Jr. Park, often cited as a goal of the project, said Stephanie Crockatt, executive director of Buffalo Olmsted Parks Conservancy.

Two concepts among 10 the DOT has considered best meet the project's objectives, said Joe Morrissey, a Department of Transportation spokesman.

The concepts are similar: a six-lane tunnel covered with "Victorian gardens" or a "tree-lined parkway setting."

The tunnel would be placed along the portion of the highway best suited for it, Morrissey said.

"This section of expressway, locally known as the bathtub section, is depressed, which would allow for a tunnel to be constructed with minimal impacts," he said.

A federal environmental review, which began in January at Hochul's behest, is on track to be completed in early 2024, with tunnel construction expected to begin later that year.

The tree-lined parkway is more in line with Humboldt's original design, since Humboldt once boasted rows of tall elms with large canopies.

The greenspace reflects goals emphasized by Hochul, Majority Leader Crystal Peoples-Stokes and the Restore Our Community Coalition, an East Side group that has advocated for the decking proposal.

The most important need is to help the neighborhoods fractured by the highway, said Stephanie Barber Geter, chair of the coalition, who sees a "re-creation" of Humboldt Parkway rather than restoring it the way it was.

"We are reclaiming our neighborhoods in terms of easy walkability and lack of air pollution," Geter said. "We will not put Humboldt back the way Olmsted had it, because the reclaiming of these issues are higher on the list."

Henry Louis Taylor Jr., who directs the Center for Urban Studies at the University at Buffalo, believes the project as now defined doesn't go far enough.

When Hochul announced the start of the environmental review for the project in January, she talked about how the nation's highways constructed in the 1950s and '60s that had divided communities are being removed. She suggested highway removal was also on the table for Buffalo.

"We're about to begin the environmental impact study regarding the removal of the Kensington Expressway, bringing it back to its original home," Hochul said, referring to Humboldt Parkway. "This community should no longer be divided, and I'm very excited about bringing back Humboldt Parkway." 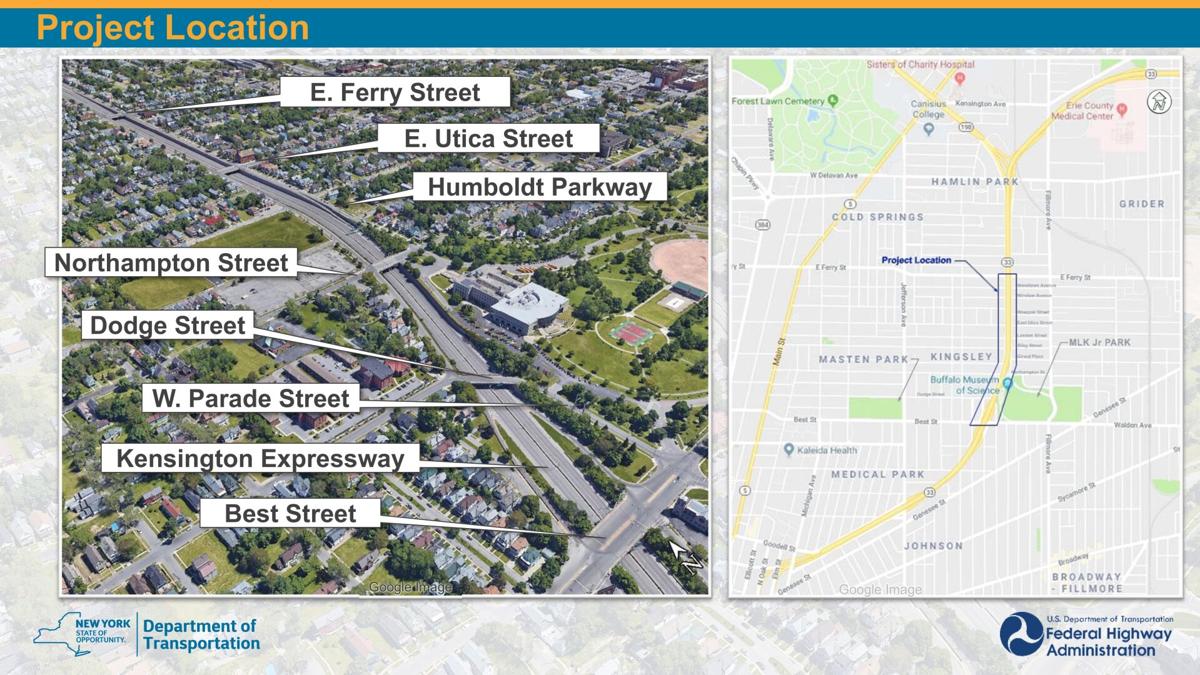 The governor in the same speech heralded the removal of Rochester's Inner Loop East, which led to new housing and other development opportunities in the city and reunited the East End neighborhood in that city.

"We did that in Rochester, on the very site where there had been a highway, not unlike the one right outside these doors," Hochul said at the Buffalo Museum of Science. "That's what gives me hope. It's been done before with great success."

But removal of the Kensington Expressway from the East Side to downtown was rejected from the outset. The Department of Transportation said doing that would not meet a project objective to "maintain the vehicular capacity of the existing transportation corridor."

The department also rejected reducing the size of the expressway to four lanes and diverting traffic to other roads. Doing so, the Transportation Department said, would lead to substantial traffic delays and increased pollution.

Dominguez said the project, when finished, "will be a transportation solution that reconnects the community while keeping traffic flowing and recognizing Olmsted's vision for East Buffalo."

Peoples-Stokes, a key proponent of the project, acknowledged the plan doesn't restore Humboldt Parkway from Delaware Park to Martin Luther King Jr. Park. But that remains the goal, she said.

"This is a phased approach, and this is the first phase of it," Peoples-Stokes said. "There are at least two more phases that we will have to go through before we get that vision that people see, and I think that's a good vision to have."

Whether future budgets will provide funding of this magnitude remains to be seen. Hochul set aside funds for the project in a five-year capital budget separate from this year's state budget.

Several options being considered for the Scajaquada Expressway corridor could help.

They call for restoring Humboldt Parkway from Delaware Park to East Delavan Avenue, where the Scajaquada (Route 198) and Kensington (Route 33) meet. That would be possible only by converting the highway to a parkway.

"Doing that would connect neighborhoods and get us closer to linking Delaware and Martin Luther King parks," said State Sen. Sean Ryan, who has been active in the planning process that is expected to wrap up this summer.

If that were to happen, it would leave the connection from East Ferry to Delevan to complete the parkway.

"Our historic mission is to see the historic assets of Olmsted return,"  Crockatt said. "But we also believe this community has suffered terribly because of this great divide, and so to see it come back in some way is definitely fulfilling part of that mission."

But Crockatt is concerned about the plan for the parkway beyond the deck's relatively short distance.

Crockatt doubts that picturesque tall trees with big canopies along Humboldt are possible on a deck. She's skeptical of the Department of Transportation's claim that tall trees could grow there as 80,000 vehicles a day travel underneath in the tunnel.

"It's possible to have trees, but there is a root system underneath the tree that almost mirrors the size of the tree," she said. "It's going to be hard to grow the tall trees that I think the community is imagining would come back for Humboldt."

Yet to be determined is what to do about air ventilation in the tunnel and the air quality in a residential area. The technology can be space-intensive: A rendering for one option shows a complex 220 feet wide with five air-ventilation structures spaced 600 feet apart.

Crockatt fears an above-ground air-ventilation system would be a visual blight.

"We would never put stacks down the center of Chapin Parkway," Crockatt said. "If they are not really bringing back Humboldt, then let's not talk about it that way.

"If you are really going to bring back the Humboldt Parkway, then you have to fill the highway in and take it back to the way it was originally," Crockatt said. "This community has suffered so much because of this horrible road that I would hate for their expectations to be doused."

Ellen Harris-Harvey, president of the Trinidad neighborhood Association, said she wishes the project would extend to Delaware Park.

"It's a good start, but how could they forget about the rest of it?" she said. "We're all being affected the same way by the pollution and the traffic, and the dangers of people getting off the ramp, especially in my neighborhood because of children playing. If we're going to do something, let's do it all the way and not just halfway."

A public comment period as part of the environmental review runs through July 29. To read the scoping report and other project documents or offer comments, go to kensingtonexpressway.dot.ny.gov.

Taylor, the Center for Urban Studies director, said he has been struck by the lack of community engagement, planning and studies for such an important project. That stands in contrast, he said, to the civic participation and studies occurring over the Scajaquada proposals.

"There should be a plan for the entire impacted area that talks specifically about what is going to be done, and that plan should be informed by engagement with people who live inside the neighborhood," Taylor said.

Dominguez, the state DOT commissioner, said the agency received good feedback from the community at its public scoping meetings, and added engagement with residents from the neighborhoods "will be robust and ongoing."

The next public hearing is scheduled in summer 2023, with a final determination expected in early 2024.

The current review process draws on studies and public outreach the department did in 2012 and 2019.

"Based on preliminary evaluation, it is not expected that significant adverse effects would result from implementation of the project," Morrissey said, explaining why the quicker, less comprehensive environmental review will be followed.

"There are so many things you could do around the city," one resident said. "This won't do anything for the City of Buffalo but put a Band-Aid over it."

"The imagery shows a moat that now exists in the neighborhood, and then shows the beauty that once was," said wheatpaste artist Max Collins, who created the mural. "I'm trying to give context to what the loss was."

The Editorial Board: Think big on Kensington's possibilities

"If this project is considered worthy of an investment that exceeds the state’s contribution toward a new Bills stadium, then why shouldn’t the city residents whom it is intended to benefit get the highest benefit possible?" writes The News' Editorial Board.

East Side office opens for Kensington project: Public feedback 'crucial to its success'

A community outreach office opened today on the East Side for the Kensington Expressway project, raising the project's public profile and giving residents more chances to offer feedback.

Earlier this year Gov. Kathy Hochul endorsed a proposal for decking the portion of Route 33 that runs through the East Side between Best and E…

'Undoing a more than 60-year inequity': Kensington Expressway project called a victory for the community

A review process leading to a plan to reconnect predominantly Black neighborhoods on the East Side and restore Humboldt Parkway by covering a portion of the Kensington Expressway will be done faster than usual, Rep. Brian Higgins said Friday.

The extraordinary flow of state dollars to the East Side is exciting and long overdue, said Monica Pellegrino Faix, executive director of the Central Terminal Restoration Corp.

The plan endorsed by the governor – which she mentioned at the State of the State address earlier this month – would deck the portion of the highway between Best and East Ferry streets, creating a tunnel for traffic.

Restoring a stretch of Humboldt Parkway with a deck over the Kensington Expressway is no longer a long shot. Now, it is a New York State priority.

State officials say the $225 million – $185 million from the state, with $41 from philanthropies and $9 million from the City of Buffalo – will follow a planned, step-by-step approach that began several years ago. Those on the giving and receiving ends point to signs the public funds will be well spent.

Don't think Buffalo can remove a highway? Rochester did.

Rochester’s removal of a hated urban highway has Buffalonians thinking: Could the Skyway or Kensington Expressway be