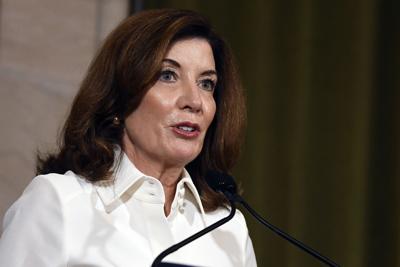 Kathy Hochul didn't just become New York's first woman governor last week. She became the most powerful female governor in the nation's history, as well as one of the most prominent women in American politics.

At least that's what people who study state politics, and the increasing role that women play in it, say – and not because of anything Hochul herself has done in her three-decade rise from the Hamburg town board to the governor's mansion. Instead, they say Hochul wields extraordinary power and influence thanks to the state's constitution and New York's outsized place in the American story.

In New York, "a lot of the executive power really is concentrated in the governor – and that's unusual in the states," said James Coleman Battista, an associate professor of political science at the University at Buffalo who studies state governments.

What's more, no state as large or as prominent as New York has had a female governor in three decades.

"Having her serve as governor sends an important signal around the world because for many people globally, when they think of the United States, they think of New York City and the Empire State," said Amanda Hunter, executive director of the Barbara Lee Family Foundation, a nonprofit that works to advance women in politics. "In our latest research project, we asked voters to picture a governor – and a majority pictured a man. So having her serve, even if for a short amount of time, in such a high-profile position helps challenge those stereotypes, and not just in New York."

It's possible that Hochul will serve only for a short time. She's likely to face a Democratic primary challenge next year based on ideology or geography or both, given that she's long been seen as a moderate Buffalo-area Democrat in a state that's dominated by liberal New York City.

But Hochul has also vowed to be a different sort of governor than her predecessor, the domineering but scandal-plagued Andrew M. Cuomo. She promises to work through collaboration rather than confrontation – and to hear scholars tell it, such governors often succeed.

Cuomo was "maybe the most powerful governor in the United States," Timothy Kneeland, a professor of history and political science at Nazareth College in Rochester, told the Albany Times-Union last year.

"The budget comes directly from the governor's office," he said. "The governor has extensive appointment powers, some of which do not need legislative approval. And, of course, the governor has the vast resources of a fairly significant bureaucracy at their disposal."

Governors in many other states are not so lucky.

"If you look at the existing research, most of it places the governor of New York on the high end in terms of the formal, institutional powers provided by the Constitution," said John Kincaid, director of the Robert B. and Helen S. Meyner Center for the Study of State and Local Government at Lafayette College in Easton, Pa.

In other states, some significant state positions – like secretary of state and agricultural commissioner – are elected, but in New York, they're gubernatorial appointments. Many states term-limit their governors, but in New York, governors can serve forever and often seemingly do, never becoming long-term lame ducks with diminished power. Twenty states allow voters to recall their governors – as California voters may well do on Sept. 14 – but New York doesn't.

And in managing the state, Hochul will have executive powers comparable to those of an official who sits not in a state capitol, but in the White House.

"New York is about as close as you're going to get to a model that similar to the federal government," said Battista, of UB.

New York's size and prominence also help mark Hochul as the most powerful woman governor in the nation's history.

Many large states – such as California, Florida, Pennsylvania and Illinois – have never had a female governor.

Only one other large state, Texas, has. There, Democrat Ann Richards served as governor from 1991 to 1995, but a 1990 academic study ranked the Texas governorship among the nation's weakest, thanks to the governor's limited power to control the budget and appointments.

Eight other states currently have female governors. The largest among them is Michigan, where, according to that study, the governor has only "moderate" power. That study ranked the New York governorship among the five most powerful in the nation.

That means Hochul, in inheriting the governorship, inherited an extraordinary opportunity.

New York's leaders "carry a lot of influence because it's so populous and it's a financial center; it's very wealthy," said Karen Kedrowski, director of the Carrie Chapman Catt Center for Women and Politics at Iowa State University. "All of those reasons would mean that the position is both powerful and it's prestigious and is also much more in the limelight."

Given Hochul's deep political connections stemming from her service in Congress, she could even make the New York governorship more powerful, said Kelly Dittmar, director of research at the Center for American Women and Politics at Rutgers University.

"On paper, she's already among some of the most powerful women, but I think even more so, that power can grow over the next few months because of the importance and influence of New York and her relationship as well with national Democratic leadership," Dittmar said.

Hochul promises to wield power differently than her predecessor.

"We will have a fresh and collaborative approach," she said in her inaugural address.

As if to prove it, she has already shared pastries with New York City Mayor Bill de Blasio, with whom Cuomo famously feuded. Hochul also stresses that she has worked closely for years with state legislators and local leaders.

While that style may be new to Albany, political scientists have seen it for years from other female leaders.

"We see it in the literature on women in legislative leadership but we also see it in business leadership and nonprofit leadership – that women take a more collegial, cooperative and collaborative style," Kedrowski said.

Such a style often leads to success, said Kincaid, the state government expert from Lafayette College.

Hochul will face challenges along the way: responding to the Covid-19 pandemic and the resulting economic havoc, passing a budget that will set her priorities and then running for re-election in 2022.

All the while, she will face a challenge that only 44 women have ever faced: proving herself as a state governor.

It's a challenge Hochul welcomes.

"I want to make sure that people know that when I'm done with my administration – and however many terms this goes – that they'll say: yes, women can lead, they can achieve greatness, they can do good for the people of their state, leave a strong legacy of accomplishment, but get it done in a way that's so different than we've seen before," Hochul said on MSNBC last week. "And that's the responsibility that is on my shoulders right now. I feel it strongly. I feel the weight of it, but I'm up to the task."

This is how love changes your brain

‘Never have we seen this crisis in April': In India, a water train to help with the heatwave

‘Never have we seen this crisis in April': In India, a water train to help with the heatwave

What You Need To Know About Monkeypox

What You Need To Know About Monkeypox