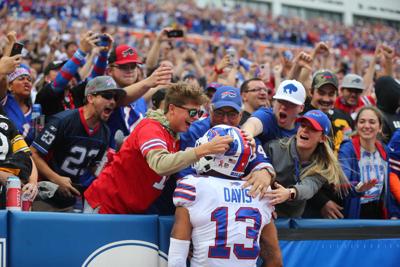 Christine Peters quit her job because it required her to work Sundays and she had to keep that day free during the Buffalo Bills season.

Paul Burdon hadn't missed a pre-pandemic Bills home game since 2002 and has seen the team play at all but three current NFL stadiums.

And Nick Manning moved across an ocean from his native England to be close enough to Buffalo to get season tickets.

But come Sunday, you won't find the trio tailgating in their usual spot in the raucous Hammer's Lot. And you won't hear them cheering on Josh Allen, Stefon Diggs and their mates from inside Highmark Stadium.

That's because Peters, Burdon and Manning all live in Ontario and still can't drive across the border into this country.

So they had to watch the season opener on TV. And they'll have to do the same for Sunday's home tilt against the Washington Football Team.

"It's heartbreaking, actually," said Peters, a season ticket holder who normally leaves her Barrie, Ont., home at 2 a.m. to drive to Orchard Park on game days. "It's like Sunday comes, and you know you have something to do that day, and it's just not happening. So your day is so empty."

Canadians were as excited as anyone to return to Highmark Stadium – especially for a season with high expectations for another deep playoff run.

It was one thing when all fans were shut out of Highmark, Canadians say. But it's like getting tackled by Star Lotulelei to see American fans back at games while they're stuck on the other side of the border – a border vaccinated Americans are now allowed to cross.

"The last couple of years have been a kick in the gut," said Burdon, a central figure at the famed Red Pinto Tailgate in Hammer's Lot who carpools with Peters.

The Biden administration most recently extended the border closure through Oct. 21. Canadian fans are selling off their tickets a game or two at a time, hoping the border will open before the Oct. 31 home contest against the Miami Dolphins.

The most desperate are researching the logistics of flying to this country and then driving to Highmark or a Bills road game.

"I will, 100%, be in the stadium at some point this year. Whatever it takes – swim across if I have to – but I will get there," said Wayne Kretz, a season ticket holder and president of the Bills Backers group in St. Catharines, Ont. "God willing, there's a playoff game? Try to keep me out."

Last regular season, because of Covid-19 restrictions, no fans were allowed into Highmark Stadium. A limited number, though no Canadians, attended the two home playoff games.

The team wouldn't disclose how many of its season ticket holders are Canadian.

A decade ago, according to the Bills, that figure was 12%. However, Bills representatives have told the office of Rep. Brian Higgins, D-Buffalo, the Canadian share has ranged from 15% to 25% in recent years.

In interviews, Canadian fans said they renewed their tickets this year because they believed the border would reopen well before the season started Sept. 12.

That hope turned to dismay in early August, when the Canadian government opened the border to nonessential American travelers but the United States didn't return the favor.

The latest, one-month extension on Aug. 21 wiped out the preseason home game and home opener for Canadian fans, whose frustration only grew with Monday's extension for an additional month. This means Canadians can't attend Sunday's game or the Houston Texans game the following week, spurring some "choice words" from Peters.

"I'm double vaxxed. I'll even take three or four boosters if you want to give them to me, if that means I can go across the border. Give me one in each arm and a butt cheek, I don't care," she said, laughing. "Just let me go to the game."

The Canadians are not casual fans by any stretch.

Burdon started going to Bills games in 1985 and is the DJ for the close-knit group of fans who tailgate with Ken "Pinto Ron" Johnson, a traveling companion on numerous Bills road trips.

This cluster includes Manning, who fell in love with the Bills at 11 or 12 when he watched them play an exhibition game in 1991 at London's Wembley Stadium. He visited Buffalo a few times, including in 2001 when he proposed to his now wife, Julia, at a game.

The Waterloo resident, who's had season tickets since 2012, said his exile from Orchard Park "was a return to what I remember of my football Sundays past, which I left England to get away from. I didn't want to be stuck at home on the couch."

Peters records every Bills game to rewatch during the season. And she sets aside Sundays in spring and summer to watch the previous season again, in order, to review what happened and prepare for the next season.

She quit her job with Canada Post before this season started because she would have had to work Sundays. She negotiated a week off in October from her new job to allow her to travel to one Bills game, at home or on the road.

Kretz holds a set of four season tickets but regularly buys extra tickets for games and organizes buses for groups of fans to head down to games from his tavern in St. Catharines, the Manhattan Bar and Grill. This year, for the Texans game, he had sold all 54 available tickets for the excursion to Orchard Park.

"I don't think anybody anticipated it was going to drag out this long," Kretz said.

Canadian season ticket holders can keep their tickets, sell the entire season back to the Bills at face value or sell two games at a time back to the Bills, in line with the extension updates from the U.S. government, the team said.

Kretz said he sold his season tickets for the home opener on StubHub, sold back nearly all of the extra tickets he bought for part of the season and "very reluctantly" returned the tickets for the group traveling by bus.

The fans say they're waiting for Oct. 21, when the U.S. could open the border.

"I'm hopeful, but I'm not holding my breath anymore," said Burdon, who's been watching games at the Keswick, Ont., home of Blake Parnham, proprietor of a backyard bar fashioned out of a 12-foot Bills helmet.

Flying from Canada to the United States is an option, though a costly one.

Fans are considering flying to another city and either traveling back to Orchard Park or watching the Bills on the road, a loophole that doesn't make sense to many of them.

"What's safer, me getting on a plane and flying to New York City with 300 other people or me and my family getting in a car and driving for two hours?" Parnham said. "And then the crazy part is I could drive back. It would be a one-way flight."

Manning joked that he's talked to some fans about tunneling under the Niagara River with spoons. "We'll all take a shift," he said.

The Canadians searched for the right words to describe how it will feel when they get to set foot on the Highmark Stadium grounds again.

Whenever that happens, even if it's not until winter, American fans are forewarned.

"It's going to feel like Week One for us, right?" said Derek Breese of Simcoe, Ont., a 17-year season ticket holder and member of the Pinto tailgating group he calls extended family. "So everybody might be a little cold, and chilly. But look out: the Canadians are coming."

Although official attendance figures have yet to be released, it seems as though Erie County's vaccination mandate had little impact on attendance at today's Buffalo Bills game.

Here's what to know about what will happen when crossing the border starting Monday.

The news that the U.S. land border will remain largely closed to Canadians came the way it often does, via Twitter rather than in a human voice – but it prompted angry and anguished cries all across the border.

So you want to go to Canada? Here's what you need to know

Canadian officials have set forth a complicated set of requirements that visitors must comply with, lest they want to have to make a U-turn on the Peace Bridge.

Ken "Pinto Ron" Johnson won't be turning himself into a drip painting canvas as he's doused with ketchup and mustard prior to the Buffalo Bills season opener this year.

The same general rules will be in place along with the same cap on attendance, roughly 6,700 people, at the playoff game versus the Baltimore Ravens.

“This is the most pumped the city has been in 25 years,” one fan said. 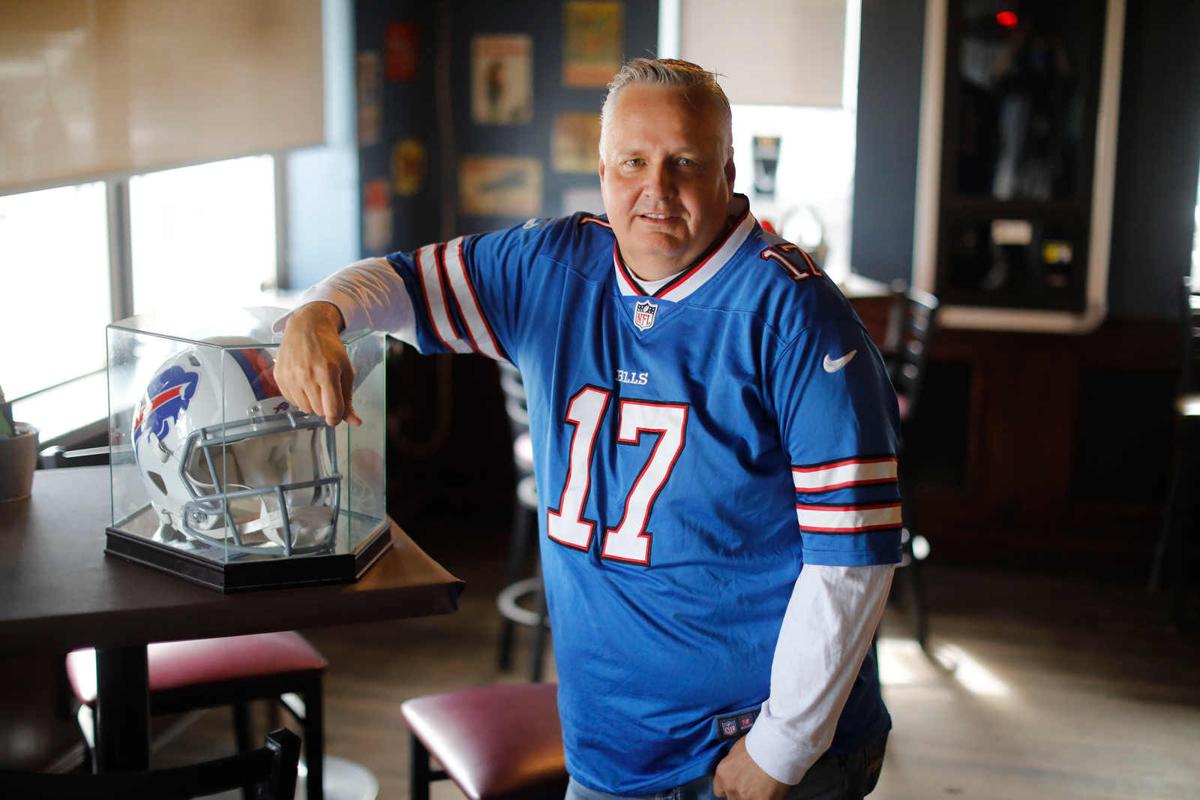 Wayne Kretz, owner of the Manhattan Bar and Grill in St. Catharines, Ont. has been a lifelong Bills fan and a season ticket holder for the last several years. Due to border restrictions on Canadian citizens entering the United States at the land border, he has been unable to attend games since the 2019-20 season. Before the pandemic, he would organize bus trips from his bar to games in Orchard Park. 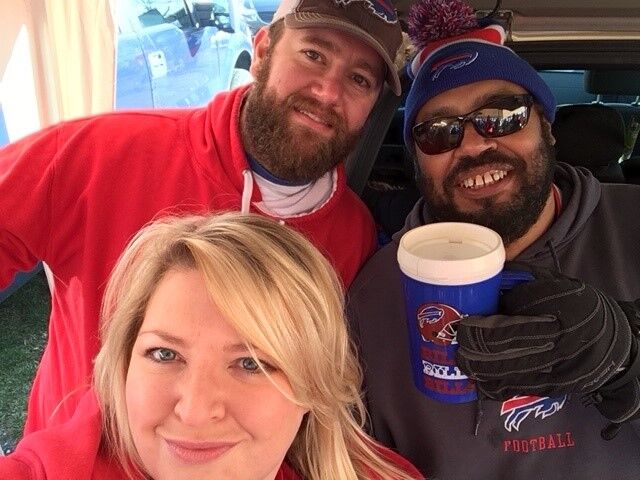 This photo shows Christine Peters and two of her close friends from Ontario, Nick Manning, in red, and Paul Burdon, back when Canadians were allowed to drive across the border for a Bills game. 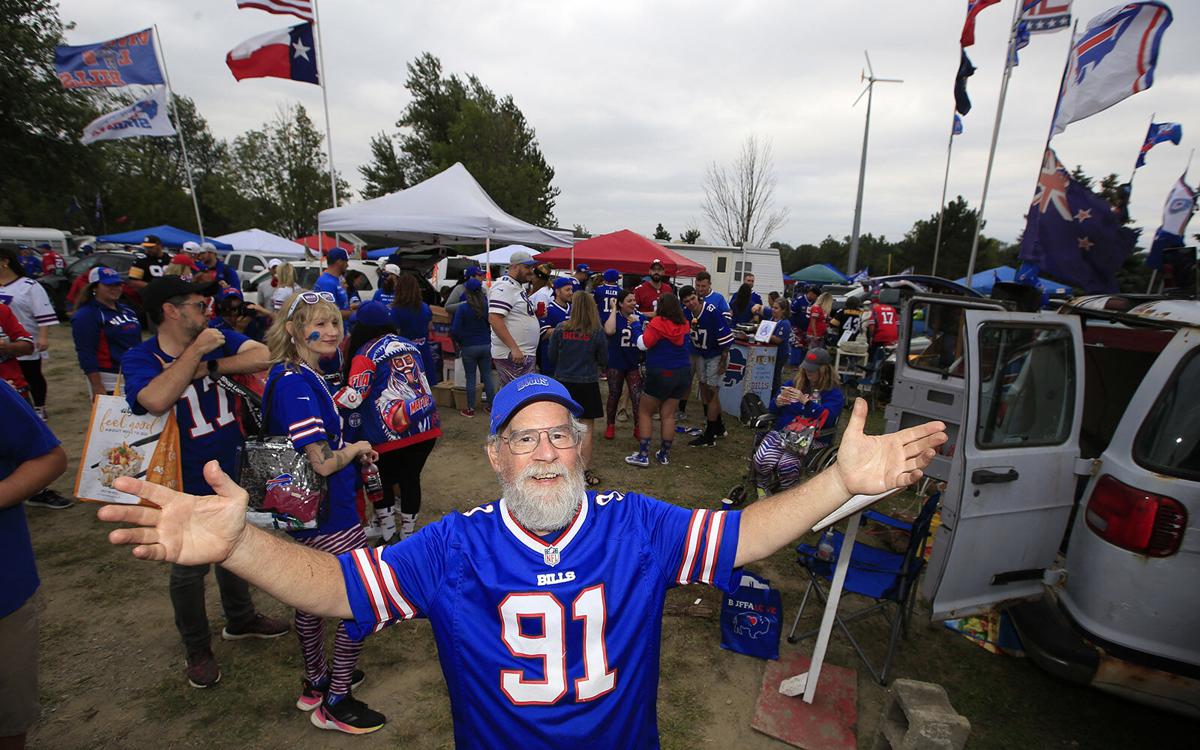 Pinto Ron at his tailgate prior to the Buffalo Bills and Pittsburgh Steelers at Highmark Stadium on Sunday, Sept. 12, 2021. 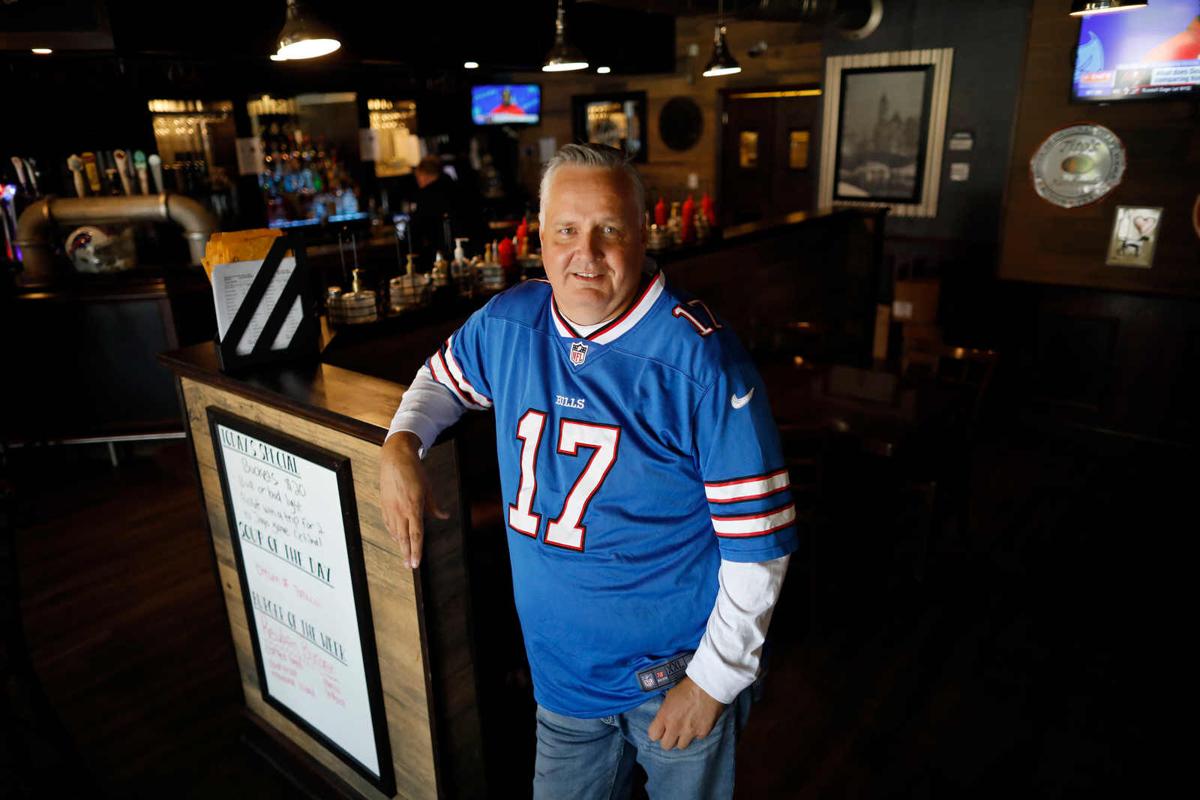 Wayne Kretz, owner of the Manhattan Bar and Grill in St. Catharines, Ont., has been a lifelong Bills fan and a season ticket holder for the last several years.