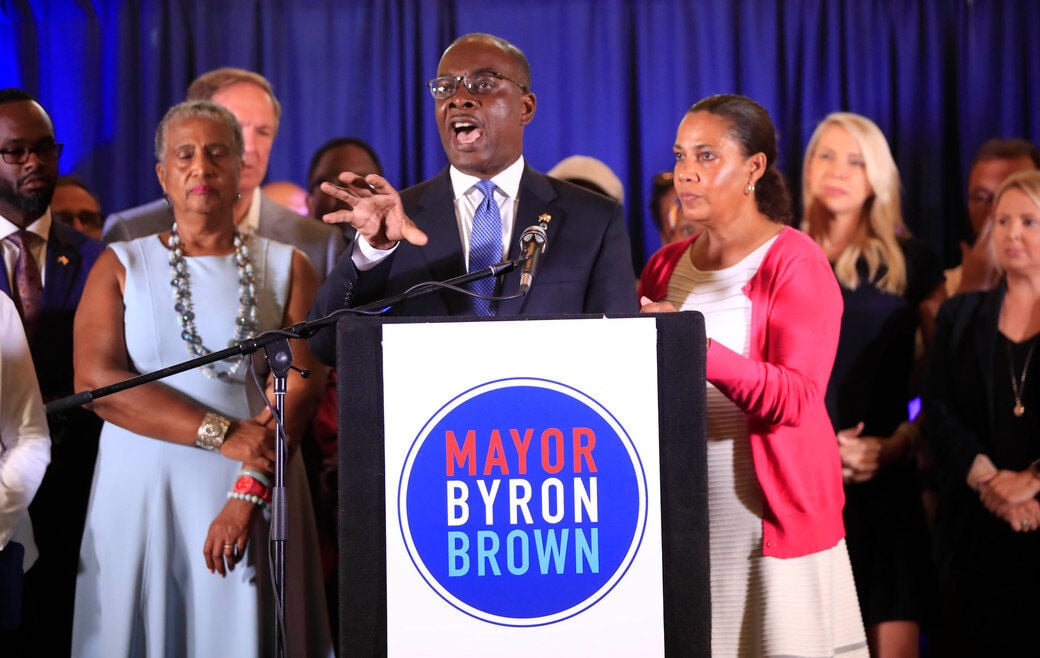 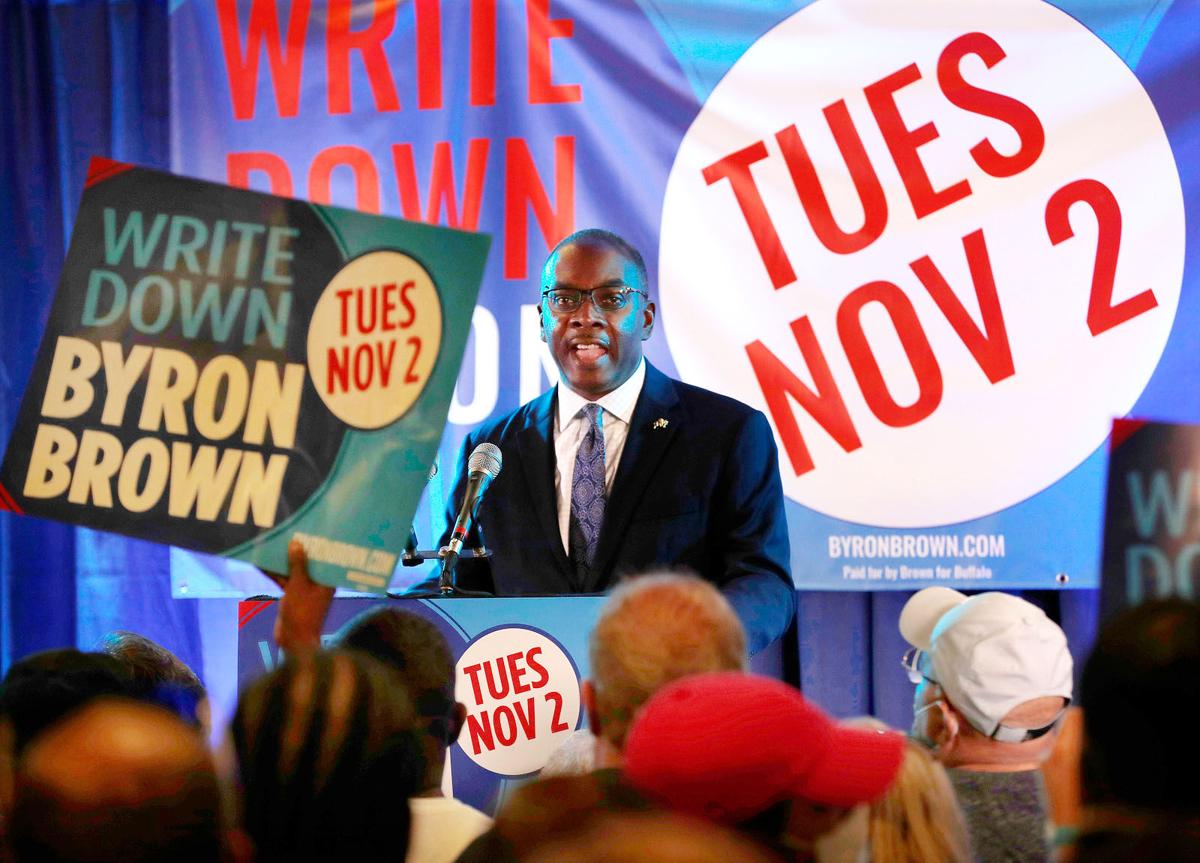 It was a crucial legal win for the mayor, coming less than a week before the state deadline to certify ballots. And it boosts his odds of holding onto the office after his loss in the Democratic primary on June 22 had put him in a position of having to mount a write-in campaign because he had not sought other ballot lines before the primary.

But the timing of the case belied anything temporary or preliminary about the ruling. Unless a federal appeals court reverses it, Sinatra's ruling is enough to keep Brown's name on the ballot.

"Granting that temporary restraining order is likely going to be the end of this matter," Jeremy C. Toth, the first assistant county attorney representing the county Board of Elections, said during the hearing.

The Brown supporters asserted an early filing deadline this year to get on the ballot as an independent candidate violated their First and 14th Amendment rights.

In a separate State Supreme Court case, Brown disputed the petition filing deadline set earlier this year by the State Legislature requiring independent nominating petitions for political office to be filed no later than 23 weeks before a general election. The state changed the date because the primary election was switched from September to June. Previously, the deadline had been no later than 11 weeks before the election.

In that case, Justice Paul Wojtaszek also ruled in favor of Brown, calling the deadline unconstitutional because it is "excessively early."

Brown, a four-term mayor who lost the Democratic mayoral primary to India B. Walton, had submitted to the county Board of Elections earlier this month more than 3,700 petition signatures in an effort to secure an independent line – called the Buffalo Party – on the Nov. 2 ballot. Last week the county Board of Elections ruled Brown’s submission was “untimely” because it was not filed by the deadline set earlier this year by the state Legislature.

"Certainly very happy about that," Brown told reporters after learning of the judge's ruling. "Very thankful to the thousands of people who circulated and signed petitions for me to be on the ballot. "

Walton called the ruling "a travesty and mockery of justice" that she expects to be overturned on appeal.

She said in a Twitter message she is confident appeals judges will "reject today’s improper ruling and appropriately rebuff Judge Sinatra for his far-right activist decision."

Walton said the hearing should never have proceeded before a judge whose brother, Buffalo real estate developer Nick Sinatra, has given thousands of dollars to Brown’s various campaigns and received millions of dollars in property tax exemptions for development projects that she said benefits developers at the expense of residents.

Walton called Sinatra "the farthest thing from an impartial judge."

At the beginning of the two-hour hearing, Sinatra said he was aware some had suggested he recuse himself from the case because his brother's political support for Brown. Nick Sinatra's individual support for the mayor included at least $7,230 to the "Brown for Buffalo" fund.

"We don't pick and choose our cases," the judge said, noting the random assignment of cases. He said he consulted recusal rules before presiding at Friday's hearing.

"There's no basis for recusal. I will apply the facts to the law as best I can," he said, adding that he intends to have his integrity intact at the end of his judicial career.

A lawyer for Walton, who the judge allowed to intervene in the case, did not ask the judge to recuse himself.

In addition to her scathing comments about Sinatra, Walton called Brown a sore loser.

"This is huge. I do believe this warrants national attention," Walton added. "We held a primary election. Mayor Brown was the endorsed Democrat, he was on the ballot in the primary and he lost. So the fact that he's able to have a second bite at the apple, it just shows that he is a true sore loser."

Walton had submitted an affidavit asking the court to deny the order putting Brown's name on the ballot.

Her lawyer, Sean Cooney, said in court papers that if the order was granted it would undermine the public's right to a fair election where the time periods under the election law are enforced equally. He cited her removal from the Working Families line on the ballot due to a similar missed timing deadline.

"If the temporary relief is granted and the name of Byron Brown appears on the ballot, he may continue on to win the general election without the public's right and confidence that the election was fairly won," Cooney said in his court papers. "This will be especially true when ultimately the constitutionality of the deadline is upheld."

New York's filing deadline for independent candidates is four weeks before the state's primary elections and almost six months before the general election.

"This means that the opportunity to run as an independent candidate is effectively cut off as of May 25, and the opportunity for voters disaffected with the major parties' nominees to coalesce around an alternative candidate is cut off as well," said Bryan Sells, an Atlanta voting rights attorney representing the Brown supporters, in his court papers. "In practical terms, this means that as of May 25, New York law effectively precludes candidacies that respond to newly emerging issues, to shifts in the positions supported by the major parties, or to major-party nominees whose views lie outside the political mainstream."

A write-in candidacy, which Brown launched after losing the Democratic primary, "is not a substitute for appearing on the ballot," Sells told Sinatra during the hearing.

"The fundamental rights of voters are at issue," he said.

Sells called Brown "a genuine candidate who could command widespread community support in the general election. But New York's early filing deadline cut off that opportunity before it began."

The Brown supporters waited nearly 14 weeks after the May 25 deadline and nearly two months after the primary to file the case.

With state deadlines to certify the ballot next week and mail military ballots on Sept. 17, the legal maneuvering, including a possible appeal, could lead to "an unreasonable and inexcusable delay" in the election board administering the election, said Toth, the county lawyer representing the Board of Elections.

"Administering an election is a very difficult and complicated matter," Toth told the judge, urging him to deny the temporary restraining order. "The process from where we are right now to where we need to be in two weeks is very difficult."

Toth contended the May 25 deadline "cannot be considered severely burdensome or even slightly burdensome."

"The legislature has to pick a date on the calendar and any date they pick is burdensome to the person who blows that deadline," Toth said in court papers.

Sinatra told the lawyers he ruled Friday so that an appeal could be filed with the Manhattan-based 2nd U.S. Circuit Court of Appeals before Thursday's deadline to certify the ballot.

"You're not early," Sinatra told Toth of the looming deadline. "But you're not late either."

The Editorial Board: Brown’s fight to appear on the ballot is a product of N.Y.’s jumbled voting laws

"The Legislature in effect created its own version of a sore loser law by moving the filing deadline for independents to well before the primary," writes The News' Editorial Board.

The Brown campaign had submitted more than 3,700 signatures on a petition to secure an independent line – called the “Buffalo Party” – for the Nov. 2 ballot.