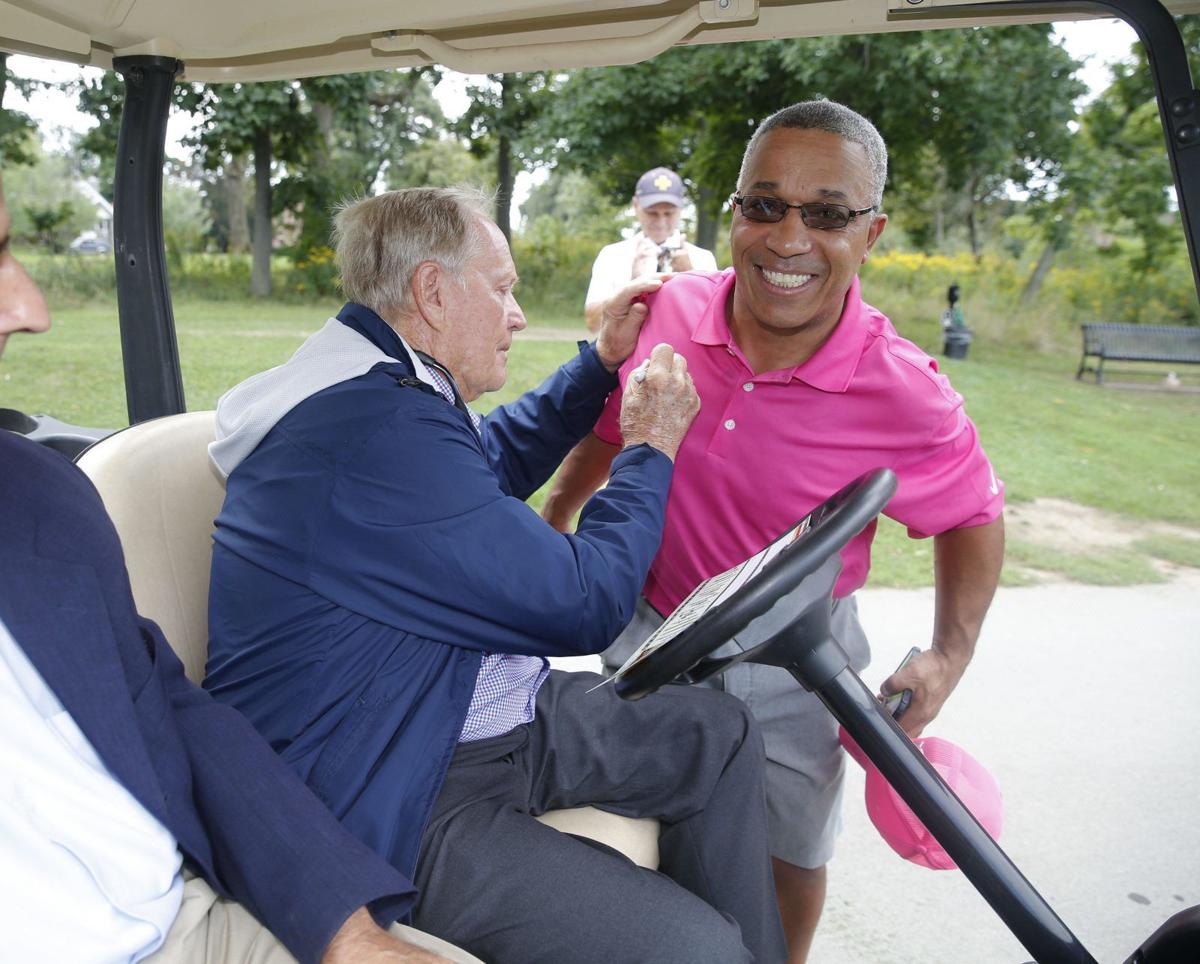 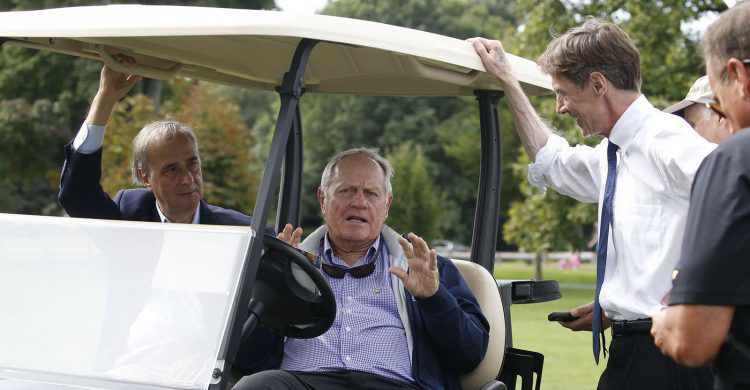 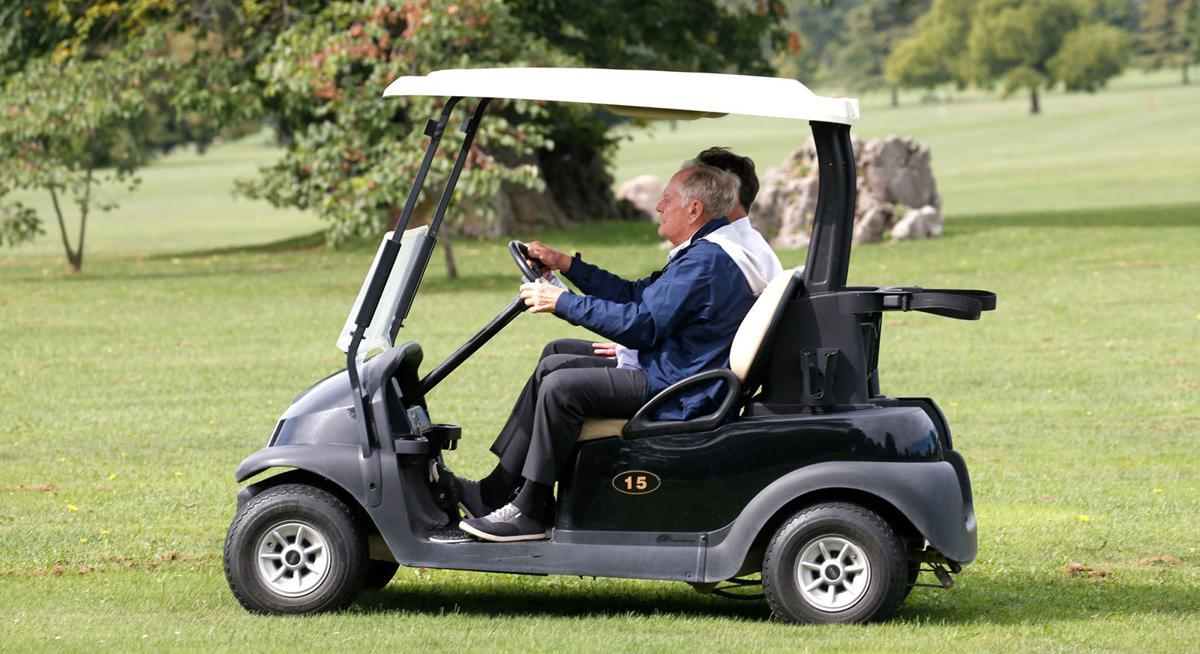 Golfers at Delaware Park were a little surprised when they saw Jack Nicklaus drive straight down the fairway. (Robert Kirkham/Buffalo News) 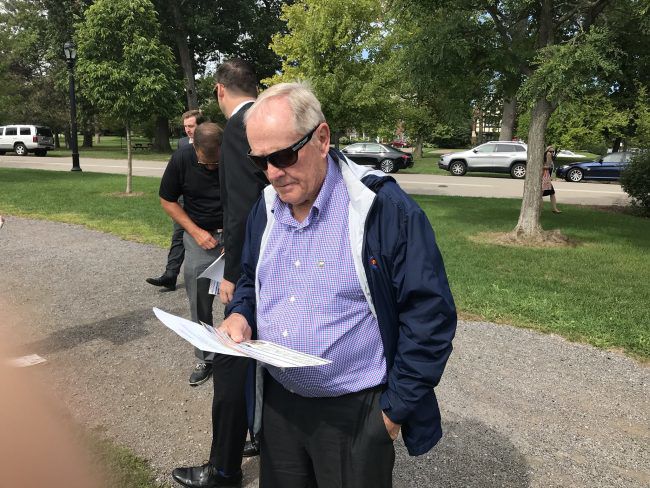 And he's willing to do it at cost.

"We've got a lot of irons in the fire, and hope to be able to create some things that work well within a budget and efficiently for the City of Buffalo and the parks system," Nicklaus said.

The question remains whether the city will let him.

The 78-year-old retired golf champion and landscape designer said he likes to get involved in community projects that make a difference, which is why he embraced a plan conceived by civic advocate Kevin Gaughan.

Restoring the arboretum has been a long-held goal of the Buffalo Olmsted Parks Conservancy.

Nicklaus said he was also drawn to the idea of creating an educational and vocational center for city youth in golf course management, including horticulture and water reclamation.

Gaughan, a local attorney, reiterated the project would be funded exclusively by private donors. The price tag includes a $12 million trust for the Buffalo Olmsted Parks Conservancy to maintain the courses and education center. Gaughan said he has commitments of nearly $4 million for the project to date.

Gaughan said a meeting with potential donors at the Buffalo Club was encouraging.

"We had such a terrific turnout that they had to put us in a larger room," he said. "I think we had virtually every CEO of every large company in our community there today. I think we're going to do fine."

Gaughan's plan has yet to receive support from the Brown administration or the Buffalo Olmsted Parks Conservancy, which the city has contracted to be the steward of Olmsted's parkland.

Michael DeGeorge, the mayor's spokesman, said the city is not in favor of eliminating the South Park golf course without public discussion or an official plan.

"I think the city has been anxiously waiting to see plans and designs, and up until this point none have come forward," DeGeorge said.

So far the conservancy  has kept Gaughan's plan at arm's-length. That stands in contrast to the enthusiasm expressed at a Monday press conference by Lucy Lawliss, co-chair of the National Association of Olmsted Parks. She expressed her support for Nicklaus' involvement and the prospect of moving the golf course from South Park to restore the arboretum.

"We are here to support what is really a one-of-a-kind project across the United States," Lawliss said.

Stephanie Crockatt, the conservancy's executive director, said many unanswered questions remain and Gaughan has not provided sufficient answers. The city's lack of support also made it "a delicate situation" for the conservancy, she said.

But Crockatt said the conservancy and Gaughan are discussing how to proceed.

"What we are considering is how we put together the right memorandum of understanding between our two nonprofits," she said.

Nicklaus began his day in Buffalo at Delaware Park. He arrived on a private plane from North Palm Beach, Fla.

He drove a golf cart around the Delaware course with Francis Kowsky, an Olmsted scholar and former SUNY Buffalo State professor.

"I like to be the driver," Nicklaus said as he got behind the wheel. "Then I know where I'm going."

Nicklaus drove the course straight down the fairway, avoiding the greens. It didn't take long before he was spotted by golfer Danny Mendez, who asked for and received an autograph from Nicklaus on his shirt.

"Amazing, amazing," Mendez said afterward. "I got chills. I met movie stars. I met wrestlers – but nobody like him. It was a once-in-a-lifetime opportunity."

Nicklaus said he thought the golf course could be improved while maintaining the pastoral setting it's known for.

"You have a nice piece of ground that is a nice park, and you're trying to play golf within it, and you're successfully doing that," he said. "I don't think you want to change that. Can we enhance that and make it better? Yes.

"The idea of having a jewel like that in the center of your city and not have it be as good as it could be is something that makes me sad and makes me want to be part of it," he said.

Nicklaus said he thought it wouldn't be too expensive to convert the land into a "relatively modern golf course," and that the work could be completed in one season, from spring to fall.

Nicklaus said he had seen only aerial photographs so far of the 107 acres of brownfield once owned by Republic Steel. Gaughan's nonprofit group purchased the land in June for $600,000 as the future site of a new South Buffalo golf course. Nicklaus said the conversion could be done in two years.

Nicklaus designed his first golf course in 1967. Nicklaus Companies, which he founded and recently stepped down from, has designed golf courses in 45 countries.

Nicklaus, who said he is "a big environmentalist-conservationist," said he would consider it an honor to meld his knowledge with Olmsted's vision.

"I like causes, and this could be a model for other Olmsted parks that are in cities, both for recreation and in education and providing jobs," he said.

He said he felt an affinity with Olmsted, and he hoped he would be asked to help with the conversion of the arboretum.

"I think we would have probably gotten along very well," he said.

Nicklaus has already built at least two golf courses on brownfields, and incorporated the industrial landscape into each. He said the South Buffalo site held a lot of promise.

"There is zero there, so we could create anything," he said.

Nicklaus also suggested the Buffalo courses could be "pilot projects" that give users the option of using different-sized balls.

"Most golf courses are designed around a golf ball, which is foolish," he said.

"The game of golf has some problems," he said. "It takes too long, it's too expensive and it's too hard. I think Buffalo could be the first place as a pilot project for this," he said.

Nicklaus expressed excitement over the educational and vocational center.

"I think it has a lot of what our country needs in a lot of directions," he said. "You can take an urban area and educate people in a vocational way that can be beneficial to them and to the community," he said.

Lawliss of the National Association of Olmsted Parks shares that view.

"There is nothing more valuable than the education component," she said. "Having retired from the National Park Service, we are not training the next generation around historic landscapes, horticultural services, the care of trees – and none of these parks survive unless you have people who know know to take care of them."

Mark Blue, president of the Buffalo branch of the NAACP, also praised the project for its potential value to city youth.

Nicklaus said his interest in the project is not about making money. The Buffalo project "was not a profit center," he said.

Nicklaus, who recorded 18 major and 73 PGA tour victories, said he is financially secure and has been involved in projects he feels make a difference in people's lives, including the opening of children's health clinics in Florida and Tanzania.

"I am beyond the business world," Nicklaus said. "I'm financially OK, but I love doing these kinds of things. That's why I'm here."

Golfers at Delaware Park were a little surprised when they saw Jack Nicklaus drive straight down the fairway. (Robert Kirkham/Buffalo News)