'It's who we are': Bills apply for trademark for 'Bills Mafia'
0 comments
Share this
Support this work for $1 a month
1 of 2 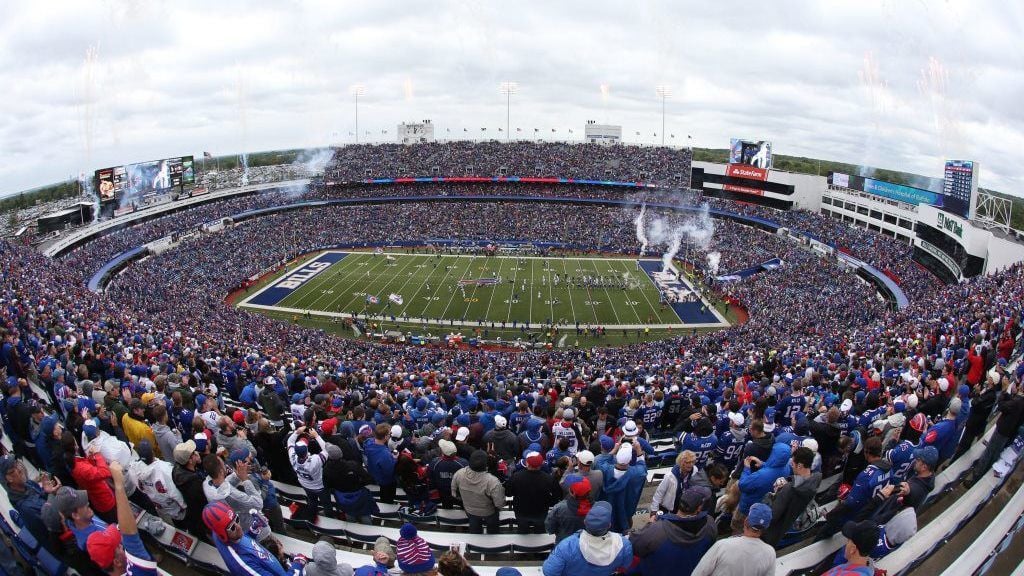 The Buffalo Bills are seeking to trademark "Bills Mafia." 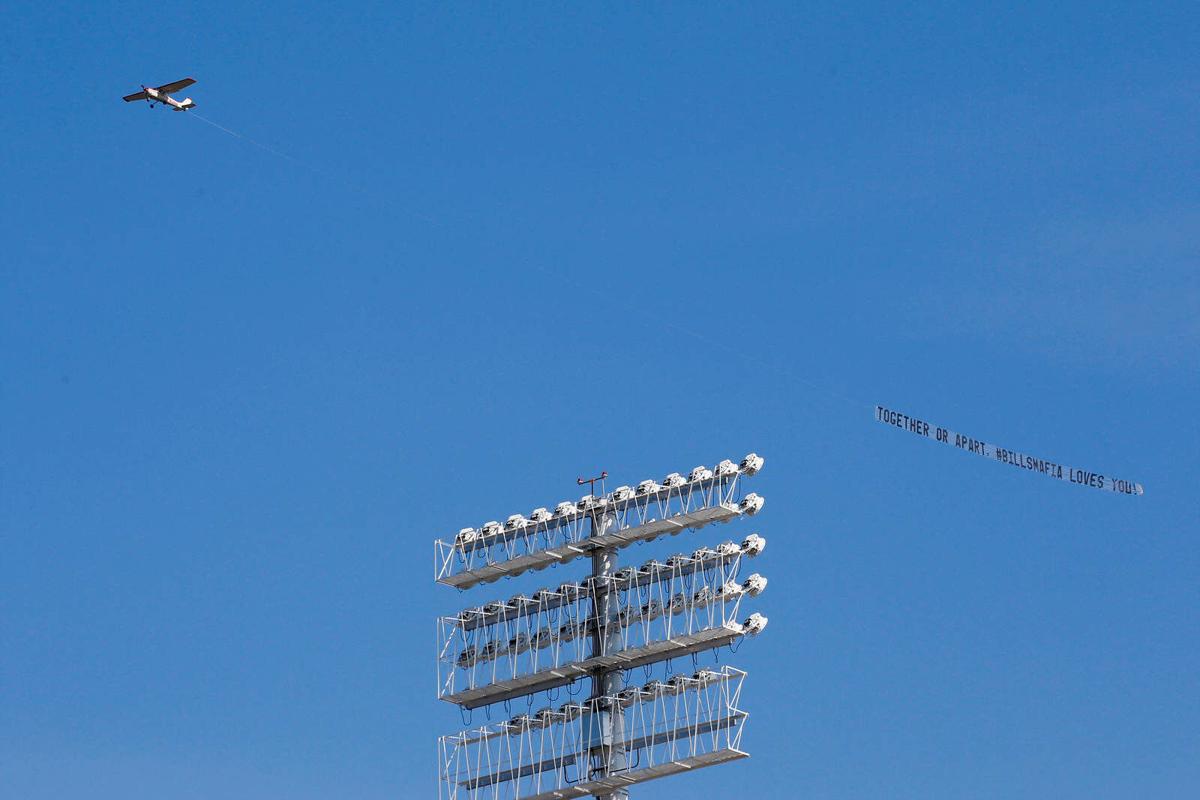 An airplane tows a banner reading "Together or apart, #BillsMafia loves you!" before the game at Bills Stadium in Orchard Park, Sunday, Sept. 27, 2020.

The Buffalo Bills are seeking to trademark “Bills Mafia” – a term that has become synonymous with its rabid fan base.

The application, which includes a logo, was filed Monday with the U.S. Patent and Trademark Office by an attorney for the Bills. The Bills trademark application says it seeks to use the Bills Mafia phrase on clothing, ranging from baseball caps and jackets to earmuffs and golf shirts, as well as on pajamas, shoes, shorts, slippers and robes, among other things.

The filing drew public attention Friday when Josh Gerben, the founder of a trademark law firm, spotted it and tweeted about it. The revelation caused a social media backlash among some fans, who accused the team of trying to control and profit from a term created and embraced by fans.

Bills Mafia is the name of an unofficial fan movement that goes back almost a decade. One of its co-founders, Del Reid, has a company called 26 Shirts, which sells a range of items featuring the word "Mafia" and the image of a buffalo – but not "Bills” or the team’s logo. The Bills Mafia nickname has caught on with sportscasters and fans, and now has an official Twitter hashtag.

Raccuia said PSE wants to build on the success of the nickname, rather than clamp down on use of it.

Raccuia praised the work Reid and his co-founders have done over the years to build up the Bills Mafia identity. He said the Bills won’t stop 26 Shirts from selling its merchandise as a result of the team’s trademark application.

“It doesn’t change what they do at all,” Raccuia said. “They have their own version of the buffalo logo with 'Mafia.' We’ve told Del we want him to be a part of this. He’s integral to how this gets developed.

“Really, (Reid is) part of our Bills family,” he said. “We’re not leaving anyone behind. We’re actually trying to bring everyone together and bring it to a higher level.”

Reid on Twitter Friday acknowledged the outpouring of support he had received from "literally hundreds" of fans. He said PSE and the Bills had reached out and were "embracing #BillsMafia and all it stands for. We're looking forward to working with them to ensure that the #BillsMafia community continues to do what it always has done: rally behind the team and support our community."

"The Buffalo Bills understand that #BillsMafia is a community of fans, not just a clever brand," Reid wrote. "Really looking forward to seeing what the future has in store."

In a follow-up interview, Reid said in his meetings with the Bills, he was adamant that Bills Mafia was "something near and dear to my heart. I often described it as another child that I have. They understand that and they agree with that."

And Reid said his work through 26 Shirts, which includes fund-raising efforts, will go on as usual. "The work that 26 Shirts does is way too important for that to change. They understand that and they think it's great what I do with 26 Shirts and the people I help," he said.

Reid took stock of how far the Bills Mafia nickname has come. "For a fan to have this term, which is an expression of love for that team that he loves - for that team to then embrace it back, it's the coolest thing ever," he said.

Reid said he knows some Bills Mafia followers are skeptical about the Bills have in mind, but said he is OK with the plans. "I wouldn't just sign off on this if it was just all about T-shirts, just all about merchandise - it's not," Reid said.

The move comes as the Bills are coping with a huge drop in revenues amid the Covid-19 pandemic, with fans not allowed to attend home games this season. The trademark application signals potential new merchandising avenues that could incorporate a “Bills Mafia” logo.

But Raccuia said the Bills are still deciding how extensively to use “Bills Mafia,” and for what purposes – commercial or otherwise. The licensing of official NFL products is handled by the National Football League.

“It may be in merchandise – I’m sure we will do some of that to launch it,” Raccuia said. “But it might not be mainstream merchandise. It might only be small, limited editions, which is what we’re leaning toward right now and probably going to do in short order.”

Raccuia was asked about online fan criticism that the Bills were essentially trying to stake legal claim to a term the team didn’t invent. “We’re really not trying to take ownership of it,” he said. “We are actually trying to legalize it, with our marks, which has never been done before. The intellectual property piece of this thing has never happened.”

Gerben, who spotted and shared the trademark filing, said he understands the legal reasons for the Bills’ filing. But he said it’s still sensitive from a public relations perspective.

It’s not uncommon for fans of a team to adopt a nickname for themselves, he said. “What’s unusual is that it gets so large that there’s a huge merchandise play behind it,” said Gerben, the founder of the Gerben Intellectual Property law firm.

Gerben said it doesn’t surprise him that Reid or the other Bills Mafia co-founders hadn’t already tried to trademark the term. "There would have been a problem in the sense that he would need to use the Buffalo Bills name as part of his trademark.” And that would infringe on the Bills’ intellectual property rights, Gerben said.

A typical trademark registration process takes about eight to 10 months to complete, he said. It will be four months before it’s reviewed by a government examiner, after which there will be a 30-day window when anyone could express opposition to the application, Gerben said.

But the Bills don’t have to wait until the process is over to start putting out “Bills Mafia” merchandise, Gerben said. “There’s plenty of companies out there that sell products without a trademark ever filed, let alone registered.”

Raccuia said the Bills will involve Reid in its plans for using “Bills Mafia.”

“Del has done an amazing job and we want him to be a part of this,” he said. “I have had multiple conversations with him and we look forward to developing this further with everybody for all these same intentions.

“I don’t think that we’ve jumped anything,” Raccuia said. “We’re really just now trying to bring it to life in a way that has to happen because the logos have to be licensed and trademarked.”

Tight end Dawson Knox was not on the practice field.

The Bills will want to force Kansas City into man-to-man coverage.

Only 8,600 fans will be allowed in Nissan Stadium for the game, but Bills fans have made sure to be in the audience.

Newest Sabre Taylor Hall to Buffalo: 'I was going to smash into a fold-up table for my intro'

Hall referenced a Bills Mafia tradition in a brief video to fans.

Wanna join the Bills' bandwagon? There's a form for that

Michael Tracy said he was not expecting his form to go viral, but just wanted to share the team’s success with fellow Bills fans.

Thanks to Josh Allen, Wyoming is becoming Bills Country

Based on geotracking of fan hashtags of more than 70,000 tweets, betonline.ag has determined that the Bills are the most popular NFL team in Wyoming.

The Buffalo Bills are seeking to trademark "Bills Mafia."

An airplane tows a banner reading "Together or apart, #BillsMafia loves you!" before the game at Bills Stadium in Orchard Park, Sunday, Sept. 27, 2020.