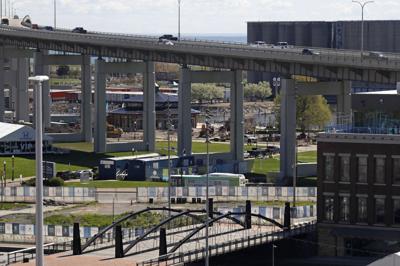 Beef tenderloin, shrimp and asparagus were on the menu, with cheesecake for dessert, when Gov. Andrew Cuomo hosted Western New York's Democratic state delegation June 1. But the culinary fare wasn't what brought the six Assembly members, two state senators and a half-dozen commissioners and staff aides to the Executive Mansion that evening.

The governor, sitting at the head of the dining table, discussed the need for the delegation to decide among themselves what their priorities were and to speak with one voice to capitalize on what is expected to be a once-in-a-generation infrastructure bill from the Biden administration, according to seven legislators who attended.

By the time dinner was over, it became clear to the delegation and the governor that a new pecking order had taken hold, with a project to transform a section of the Kensington Expressway and another to change the Scajaquada Expressway rising in popularity, while plans to dismantle the Skyway were in free fall. Six days later, Rep. Brian Higgins and State Sen. Tim Kennedy announced their withdrawal of support for the Skyway project, although Higgins told The News on Saturday that the meeting at the governor's residence had no impact on the decision or its timing.

Cuomo over the past two years had backed Higgins' and Kennedy's calls for the highway bridge's removal, sponsoring a design contest and then fast-tracking a costly study to look at alternatives.

"I think the governor was taken aback and surprised that there were other opinions at the table," Assemblyman William Conrad said.

"I think it's fair to say the governor was surprised to hear almost all of us taking a contrary position," Assemblywoman Karen McMahon said. "Maybe hearing it all at once was a little bit more impactful."

Cuomo began the conversation by saying he thought Western New York had a rare opportunity to benefit from federal infrastructure dollars, but that it was unlikely there would be enough funding to address all three projects, so the delegation needed to prioritize, several members said.

Assembly Majority Leader Crystal Peoples-Stokes was among those who promoted the decking of a portion of the Kensington Expressway to recreate the Frederick Law Olmsted-designed Humboldt Parkway and stitch back neighborhoods that were severed when the highway was constructed.

The conversation touched on a March letter to U.S. Transportation Secretary Pete Buttigieg signed by the six Assembly members. The correspondence urged the federal agency not to fund the Skyway and to instead support the Kensington project and the return of streetcars.

State Sen. Sean Ryan and other lawmakers discussed converting the elevated Scajaquada Expressway into a parkway, or possibly removing some or all of the highway. Assemblyman Pat Burke advocated for the return of streetcars to Buffalo streets.

Conrad said his main concern was getting funds for long-overdue water and sewer projects in his district.

Kennedy, who had to leave the meeting early, was the only one of the eight legislators to speak in support of the Skyway. Before the South Buffalo lawmaker left, according to several legislators, he argued vehemently for the Skyway's removal, hitting the table with his right hand for emphasis and becoming combative with Burke and Ryan.

Assemblyman Jonathan Rivera said Kennedy's defense of the Skyway project – long associated with Higgins until Kennedy, who chairs the Senate's Transportation Committee, also got on board – was understandable.

"As a region, we were convinced the Skyway was the biggest limitation for my entire childhood," Rivera said. "If he believed it, a lot of Buffalonians believed it."

"It seemed to be that the public really wasn't on board with taking down the Skyway after so much money had been put into it, and it just seemed problematic, so we expressed that," McMahon said.

"The 33 was the biggest part of the conversation, with the governor taking it in," Burke said of the Kensington Expressway.

"I would say it wasn't settled business, but that was No. 1, and you could interchange the 198 or streetcars as No. 2," Burke said.

Peoples-Stokes said the "delegation felt the 33 and the Scajaquada were more of a priority than the Skyway."

Rivera felt the elevated support of the Kensington and Scajaquada projects left an impression on the governor.

"What he wanted to know he found out," Rivera said.

The governor indicated he wouldn't back away publicly from the Skyway, but would focus going forward on the projects the lawmakers and their constituents preferred, McMahon said.

"Cuomo started doing political calculus and his next moves in real time," Burke said. "He's much more skilled at that than I had realized, in terms of his political sense."

Rich Azzopardi, senior advisor to the governor, declined to comment on the specifics of the meeting.

“We keep private conversations private, but there is no doubt that the Western New York delegation is top notch and we always value any time we can get together to discuss how to best move the region forward,” he said Sunday.

Wallace said the meeting was invaluable and reinforced the need for the delegation to speak with one voice.

"It was a good opportunity to have a conversation, collectively, about what we consider to be the priorities for our region," Wallace said. "We all got to hear one another's perspectives, and the governor wanted to hear from us, which I appreciated."

"He advised us to prioritize projects, get community input and come together as a team to try to get as much federal money as we can for Buffalo," Ryan said.

Ryan said the diminished importance of the Skyway project that came out of the meeting will make it easier for the delegation to reach a consensus.

Higgins told The News that the delegation's meeting with the governor had no effect on his and Kennedy's Skyway decision.

"No, it had nothing to do with it," Higgins said.

He continued to cast blame on the Cuomo administration's Department of Transportation.

"It had to do with the 18 months of direct talks with the governor's secretary of transportation, of which we had three different individuals, all with the same title," Higgins said. "It was very evident that the DOT was not moving on the issues that were presented to them, and that they were receptive to 18 months ago."

Higgins and Kennedy's announced pullback from the Skyway project came hours before the Hamburg Town Board passed an unanimous resolution opposing the Skyway's removal.

With redistricting in sight, which could realign boundaries of Congressional districts, Higgins could end up representing Hamburg and Orchard Park.

"No," the congressman said, before continuing his criticism of the State DOT.

Several calls to Kennedy for comment were not returned.

White House: FBI involved in getting kidnapped missionaries 'to safety'

Your brain's 'fingerprint' can be identified in just 100 seconds

Your brain's 'fingerprint' can be identified in just 100 seconds

Bring back streetcars to Buffalo? Some lawmakers say yes

The way federal infrastructure dollars will be disbursed could help those seeking to bring streetcars to Western New York.