Buffalo’s growth in the 2020 census surprised demographers, geographers and other close observers of the region’s recent history. But it did not surprise Atiqur Rahman, a 60-year-old businessman in the Broadway Fillmore neighborhood and a longtime advocate for Buffalo’s Bangladeshi community.

Rahman, who moved to Buffalo from the Bronx more than a dozen years ago, has helped at least 50 new Bangladeshi businesses open in the area and watched the crowds swell at his local mosque. Between 2010 and 2020, the new census figures show, Broadway Fillmore added more than 3,100 people – marking a sharp reversal from decades of decline and ranking it among the fastest-growing areas in Buffalo.

“The community here is growing every single day,” Rahman said. “People are moving in and it is getting better and better – the change is visible. You can see it.”

Broadway Fillmore is not unique in its changed fortunes, either: Citywide, the neighborhoods that historically suffered most from white flight and disinvestment are often the ones now recording the sharpest growth. In addition to Broadway Fillmore, large swaths of Masten Park and Delavan Grider added thousands of people since 2010. Riverside also ranks among the city’s fastest-growing areas, as do a string of neighborhoods along the city’s eastern border with Cheektowaga.

Much of that growth originated in the city’s Asian community, which increased by 12,800 people to just over 21,100 in 2020. Residents identifying as Hispanic, which refers to people from Spanish-speaking backgrounds, and those from or with ancestry in Latin America, also grew by more than 8,000 people in the past 10 years.

The dynamics behind these changes are not always clear, particularly in distressed neighborhoods: Have people moved there because they saw opportunity – as Rahman says he did – or because few other places were accessible?

There are other limits to these census figures, cautioned Abigail Cooke, a geographer at the University at Buffalo who studies migration. Among other issues, they don’t capture microtrends that took place within the decade, and they can paint in overly broad strokes when it comes to topics like racial and ethnic identification. And while it’s tempting to view population growth as an unequivocal sign of progress, particularly in a region that has seen so little of it, the reality in some neighborhoods may prove more complicated.

“This is a new story playing out against the broader, long-term pattern of white flight and white disinvestment,” said Cooke. “It doesn’t change the broader racial dynamic of disinvestment, or the kind of political attention that different neighborhoods in the city get – but the Bangladeshi community and the Burmese community, among others, have made a real difference in a handful of Buffalo neighborhoods.”

'To start from zero'

Nowhere is that difference more visible than in Broadway Fillmore, whose decadeslong population slide left nearly 2,000 homes vacant by 2010. Attracted by cheap home prices – some in the low four figures – several ethnic communities began to buy on streets like Loepere and Sobieski in the late aughts, Rahman said.

In addition to Bangladeshis, who frequently move to Buffalo after initially settling in New York, Broadway Fillmore has seen a sharp uptick in residents of Burmese and Somalian descent. The neighborhood is still majority-Black, with 6,200 Black residents.

Homeowners like Rahman – who saw Buffalo as a place “to start from zero,” he said – have purchased, rehabbed and rented dozens of aging homes, almost single-handedly rebooting a depressed housing market.

“There's so much energy and so many positive things happening that I really think we're essentially at the tipping point,” Karnath said. “We're at the point where we are starting to see significant investment – sometimes in plain sight, and sometimes bubbling beneath the surface.”

For its analysis of 2020 census data, The Buffalo News grouped the city’s 91 census tracts – each typically containing about 4,000 residents – according to how many people each added since 2010. The News then isolated the trends and patterns in the high-growth, medium-growth and low-growth or shrinking tracts.

On average, every type of neighborhood lost non-Hispanic white residents since 2010, and the lowest-growth neighborhoods lost non-Hispanic Black residents, as well. (While race and Hispanic origin are not mutually exclusive, The News' analysis focused on non-overlapping categories to avoid double-counting some people.)

Medium- and low-growth neighborhoods also have fewer children now than they did in 2010.

But residents who identified as Hispanic, non-Hispanic Asian and multiracial increased across the board. In particular, tracts that saw high growth in their Asian populations also saw high growth overall.

These are broad categorizations. Cooke points out that many people don’t identify with the boxes the Census Bureau asks them to fit into, and some decline in the white population may relate to changes in how people identify their race on census forms. Counts of relatively small communities, such as Native Americans, are inherently less reliable at smaller geographic levels. The 2020 census identified 1,359 Native American and indigenous residents in the city overall.

Without more detailed racial and ethnic data – which the Census Bureau will release at a future date – it’s also difficult to draw conclusions about the factors driving Buffalo's growth. Other available data, such as Buffalo Public Schools records and the Census Bureau’s annual population estimates, suggest that many of these new Buffalonians are immigrants, refugees or their children. More than 10,500 refugees resettled in Buffalo between 2010 and 2018, the latest year for available data, according to New American Economy, an immigration research and advocacy organization.

Between 4,000 and 5,000 Puerto Ricans also relocated to Buffalo after Hurricane Maria, community leaders have estimated, though those figures are less reliable. And the city has attracted newcomers from elsewhere in the United States, as well – a phenomenon perhaps best seen in the heart of the downtown Central Business District, which added a string of high-end rental apartments and some 550 new residents, even after a sharp decline in the Holding Center population.

“Immigration is certainly a major part of” Buffalo’s recent growth, said Robert Adelman, a sociologist at the University at Buffalo. “But there are still so many unknowns, and we don’t have quite enough data yet to figure out the roles of all these different factors.”

What is clear, Adelman said, is that much of the city’s growth has taken place on the East Side, often in areas with high poverty rates and low housing values. In Kensington-Bailey, for instance, the narrow residential strip between Bailey Avenue and Eggert Road added 1,200 people since 2010. According to the real estate site Zillow, a typical single-family home there cost less than $82,000 at the time of the census.

“I think it has to do with affordability – this is one of the areas of the city that still has a ton of density and relatively affordable home prices,” said Darren Cotton, a longtime resident of nearby University Heights and the president of the Tool Library, a nonprofit organization that seeks to help low- and middle-income residents repair their homes. “I think it’s increasingly a popular destination for people buying their first houses.”

The availability of cheap land and housing in many growing neighborhoods springs from a long legacy of disinvestment. A 2017 evaluation of Buffalo’s housing market, prepared by the national consulting firm czb and commissioned by city government, categorized swaths of several of the city’s fastest-growing neighborhoods as moderately to severely “distressed.”

From an economic standpoint, Broadway Fillmore is one of the worst neighborhoods in the city, said Jason Knight, a geographer at SUNY Buffalo State who studies the evolution of urban areas: The city demolished nearly 600 homes in the neighborhood between the 2010 and 2020 census, and Broadway Fillmore still suffers high rates of poverty, foreclosure and abandonment.

By comparison, wealthier neighborhoods that never suffered serious disinvestment or vacancy – and saw relatively little growth in the 2020 census – likely had fewer open units for newcomers to fill, and at much higher prices. Parts of Parkside, Elmwood-Bidwell and South Buffalo actually lost residents.

“I’m really interested in looking at future data to see if it supports what we’ve felt and observed – which is that people are being displaced into communities outside the West Side, like Black Rock, Riverside and Broadway Fillmore,” said Clarke Gocker, the director of policy and strategy at the left-leaning neighborhood advocacy group PUSH Buffalo.

In Broadway Fillmore, homes have grown less attainable for many would-be buyers, said Rahman. Bangladeshi investors have begun expanding their searches to areas like Lovejoy, University Heights and MLK Park, which may be further from cultural amenities like grocery stores and mosques.

At the same time, advocates for the Bangladeshi community have repeatedly asked for a greater police presence in Broadway Fillmore, as well as sidewalk and roadway improvements.

“The general people, they just want to be able to walk nicely, without all the debris and everything in the street,” Rahman said. “They want things like streetlights. Cleaning up rodent issues. We have to improve these things.”

For Knight, the Buffalo State geographer, requests like these are clear calls to action: The city needs to direct more financial and strategic resources to distressed neighborhoods, he said, particularly as more people flock to them. He argues that some recent city policies – such as an aggressive demolition program that did not return many vacant lots back to use, and a foreclosure auction that sold some homes to international investors – helped create the blight that made Broadway Fillmore “affordable” to begin with.

With this growth, however, the neighborhood might have another chance – particularly if city policy empowers both the new and longtime residents now invested there, Knight said.

“It’s chasing the American dream, right?” he said. “Come to Buffalo, where property prices are so depressed. And you can be the first. You can be my great-grandparents, who came to the East Side as immigrants with nothing in their pockets, and create better opportunities for successive generations.”

Watch now: Influx of newcomers brings 'so much energy' to Buffalo neighborhoods others once fled

The Editorial Board: True to its nature, the city prepares to welcome evacuees from Afghanistan

Immigration is a primary engine of growth and, if any city understands its value – and knows enough to ignore the often racist fears of critics – it’s this one.

The region’s gains – driven entirely by residents of color, many likely refugees and immigrants – appeared to vindicate local political leaders who have championed immigration as a means for reversing the area’s long-term shrinkage. 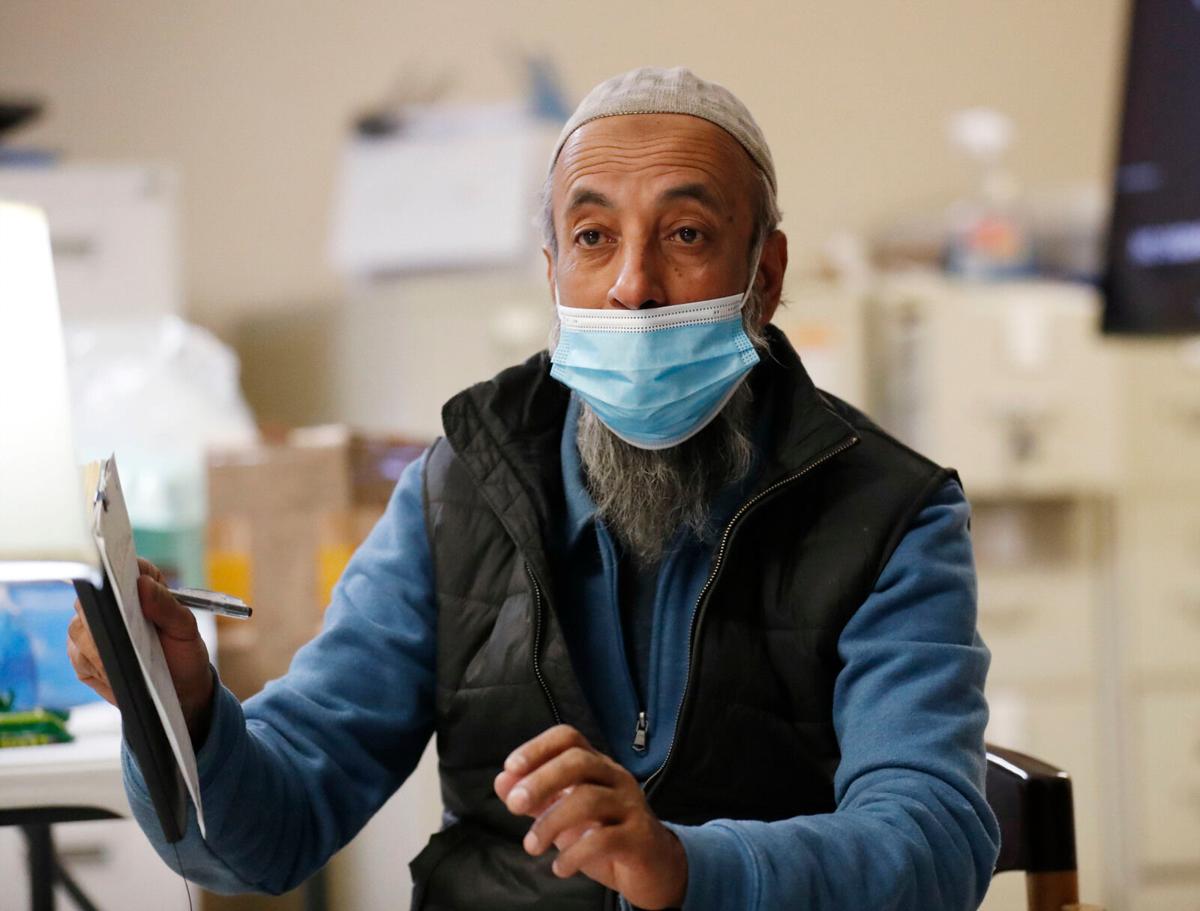 Atiqur Rahman said of Broadway Fillmore residents: "The general people, they just want to be able to walk nicely, without all the debris and everything in the street." 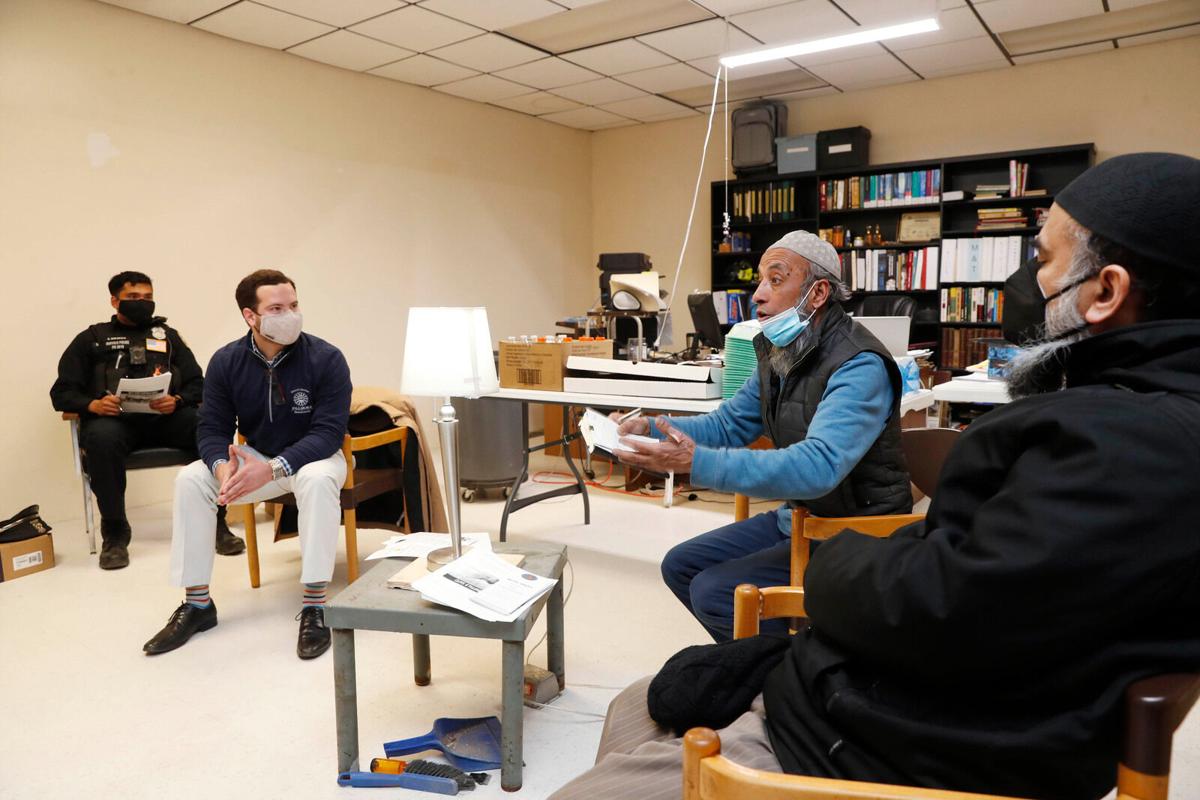 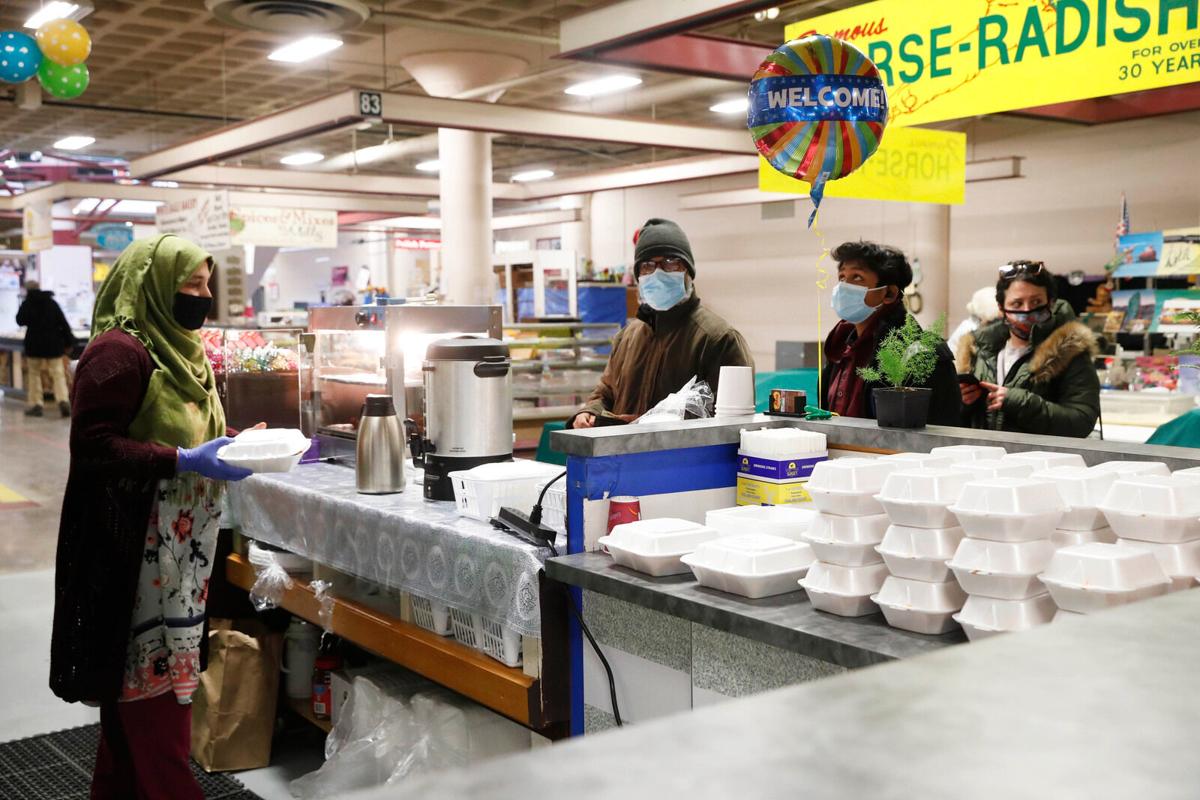 Apa's Kitchen serves customer on its opening day at the Broadway Market, Friday, Feb. 5, 2021. The Bangladeshi-Indian restaurant is owned by sisters. The Bengali word for sister is apa. Luthfun Naher serves customers. 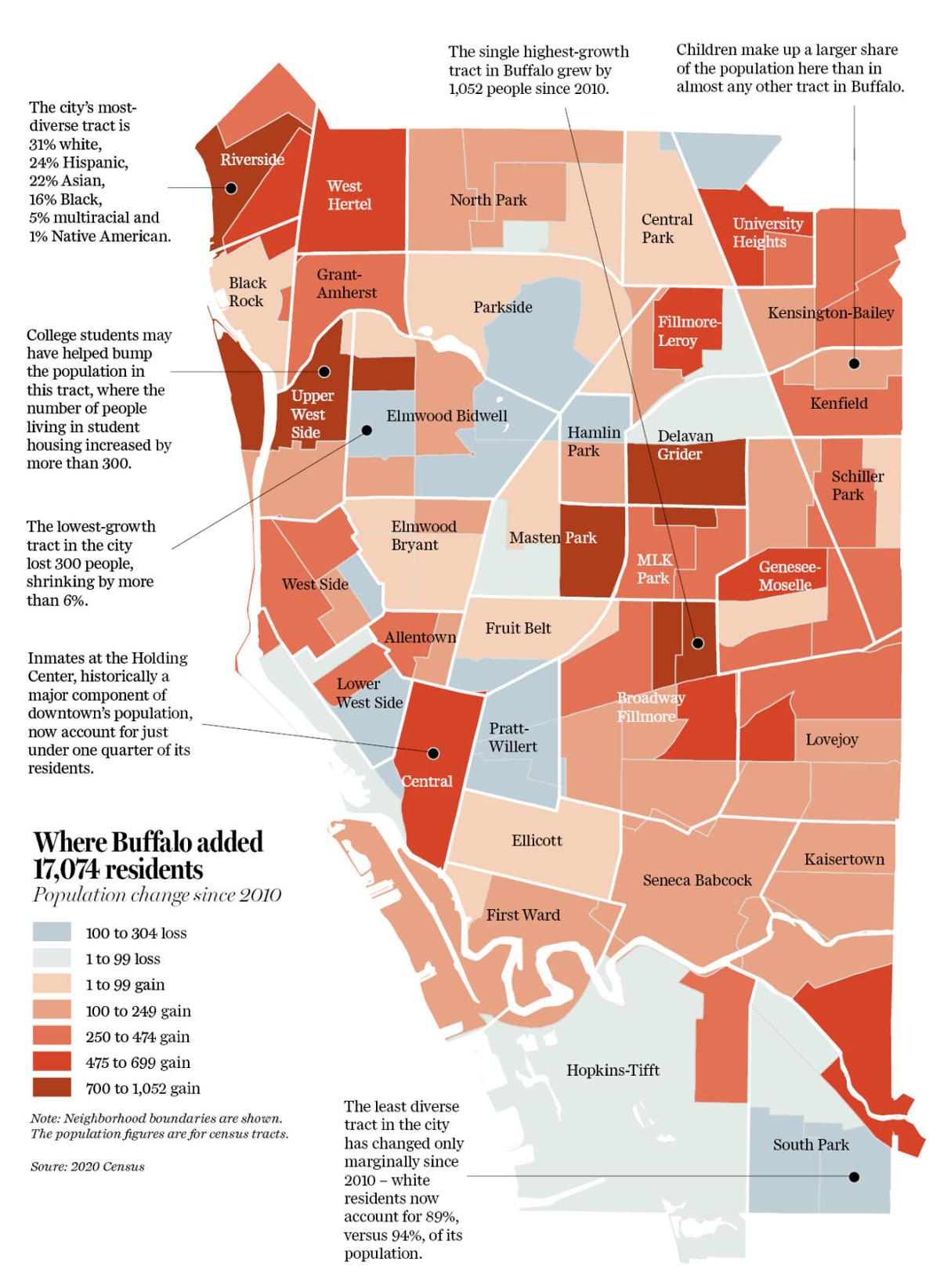