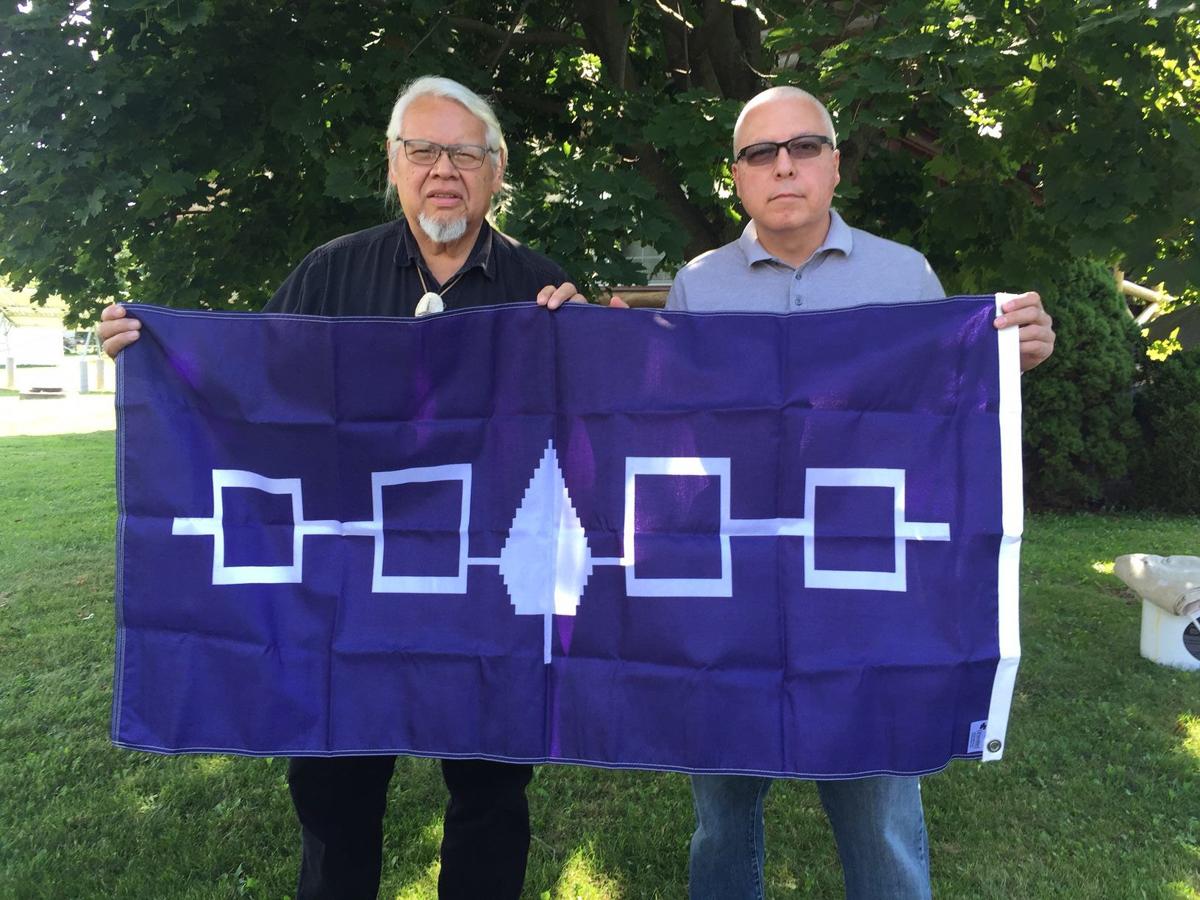 Rick Hill and Tim Johnson with the flag of the Six Nations: Hill, a Tuscorara, and Johnson, a Mohawk, were deeply involved with the genesis of what's become an iconic symbol of the Haudenosaunee, or Iroquois Confederacy. (Image courtesy Tim Johnson) 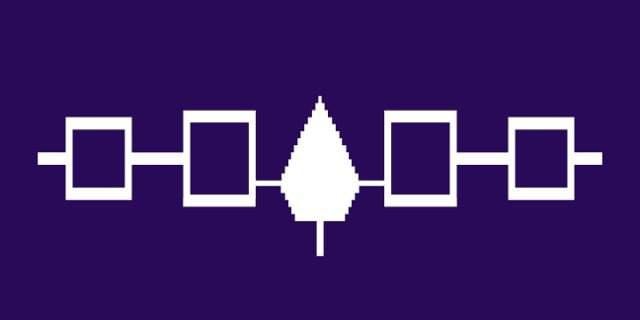 The flag of the Haudenosaunee, or Iroquois Confederacy, as created by Harold and Tim Johnson: BAsed on the Hiawatha belt, five nations, centered on a tree of peace. (Image courtesy of Tim Johnson) 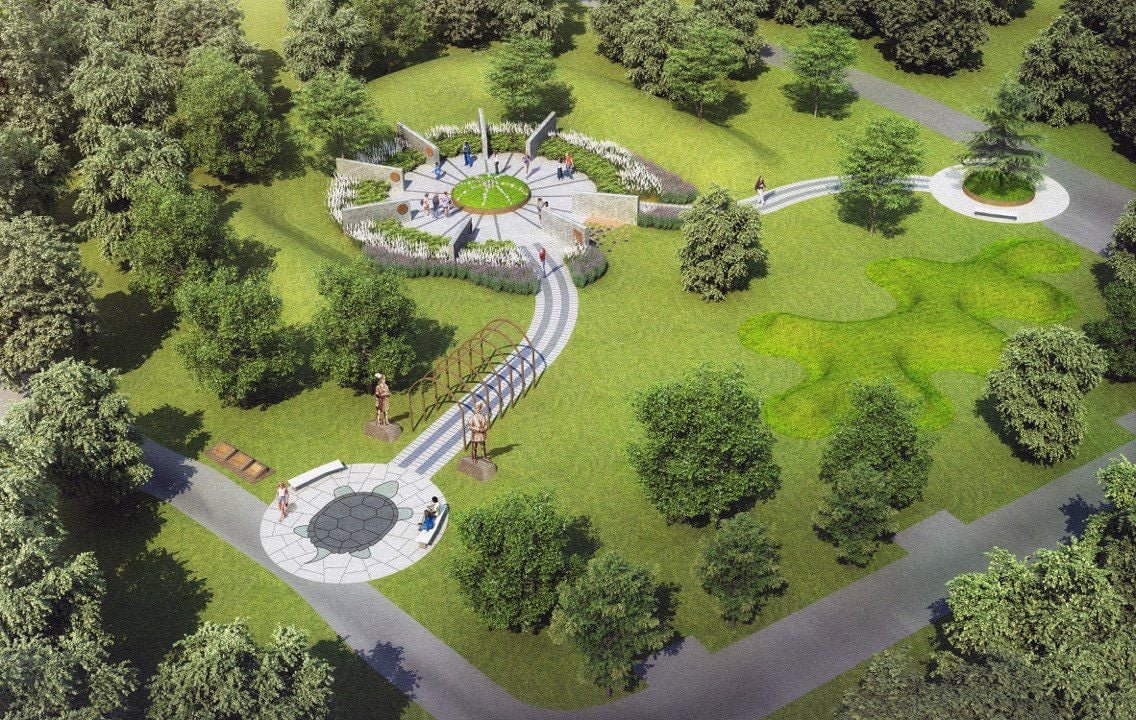 The landscape of nations: Schematic of new memorial at Niagara-on-the-Lake to native military role in the War of 1812, creation of modern Canada. (Image courtesy of Tim Johnson) 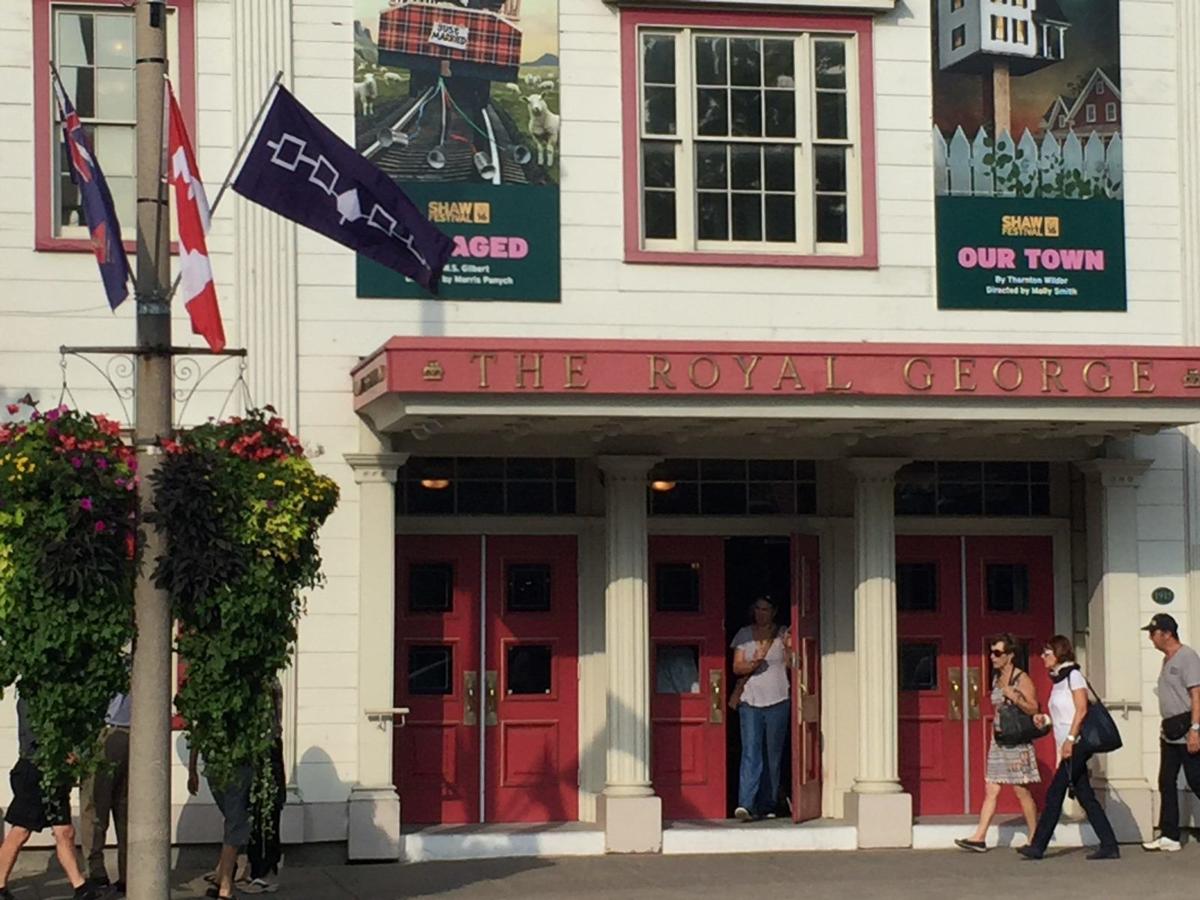 The flag of the Six Nations flies this week on Queen Street, in Niagara-on-the-Lake. (Image courtesy Tim Johnson)

Tim Johnson had a flash of pained boyhood memory as he watched the national debate over whether to stand for the flag, during the national anthem. Johnson is a Mohawk, a member of the Six Nations, raised in North Tonawanda. He remembers, as a child in public schools, standing for the Pledge of Allegiance and feeling concern about the absence of native history from what he was being taught.

He never lost that passion for exploring the full story. He would grow up to become an associate director for museum programs at the Smithsonian National Museum of the American Indian. As a young man, he was intimately involved in creating a statement of native identity whose earliest designs began in Buffalo, a symbol that is now embraced throughout the Haudenosaunee - often called the Iroquois Confederacy.

In the 1980s, Johnson did much of the design work on what is now the flag of the Six Nations. His father, Harold Johnson, ran a T-shirt shop in Niagara Falls. One day they heard from Rick Hill, a Tuscarora artist, writer and educator involved with the Iroquois Nationals lacrosse team, consisting of players from many native territories in the U.S. and Canada. The team symbolized the independent status of the Iroquois, and it needed a flag for ceremonies during a scheduled competition in Australia.

Hill brought that challenge to the Johnsons, father and son.

Almost three decades later, the result has turned into an iconic symbol. The flag is a cultural bridge that transcends longtime philosophical differences within the Six Nations, such as systems of government or the propriety of casino gambling. At the time, Hill drew a pen and ink concept for the flag, built around the vision of Oren Lyons, an Onondaga Nation faithkeeper:

The flag is based on the Hiawatha belt, an ancient wampum now held by the Onondagas. The material is purple, the color of the Iroquois, a shade derived from the mollusk shells used in creating the wampum. It portrays the story told by that belt, how five original nations - Mohawk, Oneida, Onondaga, Cayuga and Seneca - were brought together around a tree of peace.

“I worked at it when I was at the University of Buffalo,” Johnson said. As a student, he was involved in publishing a newsletter of native reflections and news, and he had equipment he could use in the design. He remembers studying photos of the original belt and then attempting, in painstaking fashion, to duplicate the precise dimensions.

It worked, beyond even the greatest hopes of Hill and Johnson. Tim's father, a longtime chemical worker who died nine years ago, turned the design into a flag. The Grand Council of the confederacy saw it as a symbol of the Six Nations. The flag would eventually go with the Iroquois Nationals lacrosse team to Australia, and it was soon embraced by an entire people.

Sid Hill, who is Tadadaho – or spiritual leader – of the traditional Six Nations, said the flag also filled a void. He remembers when many native people, angry about broken treaties and difficult conditions, would choose the same statement made now by professional football player Colin Kaepernick and a growing number of African-American athletes: They would decline to stand for the national anthem, and the American flag.

“It never really sat right with us, with all the history,” said Sid Hill, no relation to Rick. “A lot of people would sit, and they were trying to get across a message: Things aren’t so great.”

Yet a year ago, when the international indoor lacrosse championships were played at Onondaga, thousands of native visitors stood for the American flag and the American national anthem.

They offered that respect, Hill said, because they could also stand for a flag of their own.

In an event of particular meaning to Tim Johnson, the flag of the Six Nations went up this week throughout Niagara-on-the-Lake, in Ontario. Sunday, the Niagara Regional Native Centre will host an annual "Powwow" in that community. Among the priorities: Honoring native adoptees who were forcibly removed as children from their homes and culture.

On Oct. 2, the following Sunday, Johnson will serve as co-chair for the unveiling of "The Landscape of Nations," a  Queenston Heights memorial designed by native artist Raymond Skye and landscape architect Tom Ridout, of Toronto. It honors the role played by the Six Nations in the War of 1812, and the military events that helped to shape modern Canada.

"The memorial is at the highest point of the escarpment on the Heights," said Johnson, 57, who emphasized the hard work done by many toward the project. "It's absolutely beautiful."

The ceremony will also commemorate 19th century reconciliation within the Six Nations. Johnson - now retired from the Smithsonian - said the American revolution and the War of 1812 caused bitter estrangement within the Iroquois, many of whom settled in Canada because of their alliance with the British.

The ancient tree of peace, centerpiece of the flag, symbolized communion within the original confederacy. A tree of peace has also been planted at the Queenston memorial, Johnson said, a means of recalling how the people of the Six Nations gathered nearby, after the War of 1812, to begin healing their own wounds.

This week's decision to raise the Six Nations flag was made by Pat Darte, lord mayor of Niagara-on-the-Lake. Darte said the flag is a striking way of honoring the upcoming events, but he also had a deeper motivation.

Over the years, he's grown close to many men and women of the Iroquois. "It's been an extreme eye-opener," he said. Darte was stunned to learn, in harsh detail, about the longtime policy of removing native children from their homes in both the U.S. and Canada, an attempt to "break" those boys and girls of their language and traditions.

In a political era of angry, unforgiving division, when understanding can seem impossibly far away, Darte saw raising the flag of the Six Nations as one quiet point of reconciliation.

"I personally feel that (native people) have been wronged so  badly in past centuries that this is way overdue," Darte said. "This is our way of saying: Face up to it."

Sean Kirst is a contributing columnist for The Buffalo News. Leave a comment below or email him at seanpeterkirst@gmail.com.

Tuscarora artist and Onondaga faithkeeper see hope for the future as Italian-Americans in Buffalo take the initiative to have Columbus statue removed from  park.

Rick Hill and Tim Johnson with the flag of the Six Nations: Hill, a Tuscorara, and Johnson, a Mohawk, were deeply involved with the genesis of what's become an iconic symbol of the Haudenosaunee, or Iroquois Confederacy. (Image courtesy Tim Johnson)

The flag of the Haudenosaunee, or Iroquois Confederacy, as created by Harold and Tim Johnson: BAsed on the Hiawatha belt, five nations, centered on a tree of peace. (Image courtesy of Tim Johnson)

The landscape of nations: Schematic of new memorial at Niagara-on-the-Lake to native military role in the War of 1812, creation of modern Canada. (Image courtesy of Tim Johnson)

The flag of the Six Nations flies this week on Queen Street, in Niagara-on-the-Lake. (Image courtesy Tim Johnson)