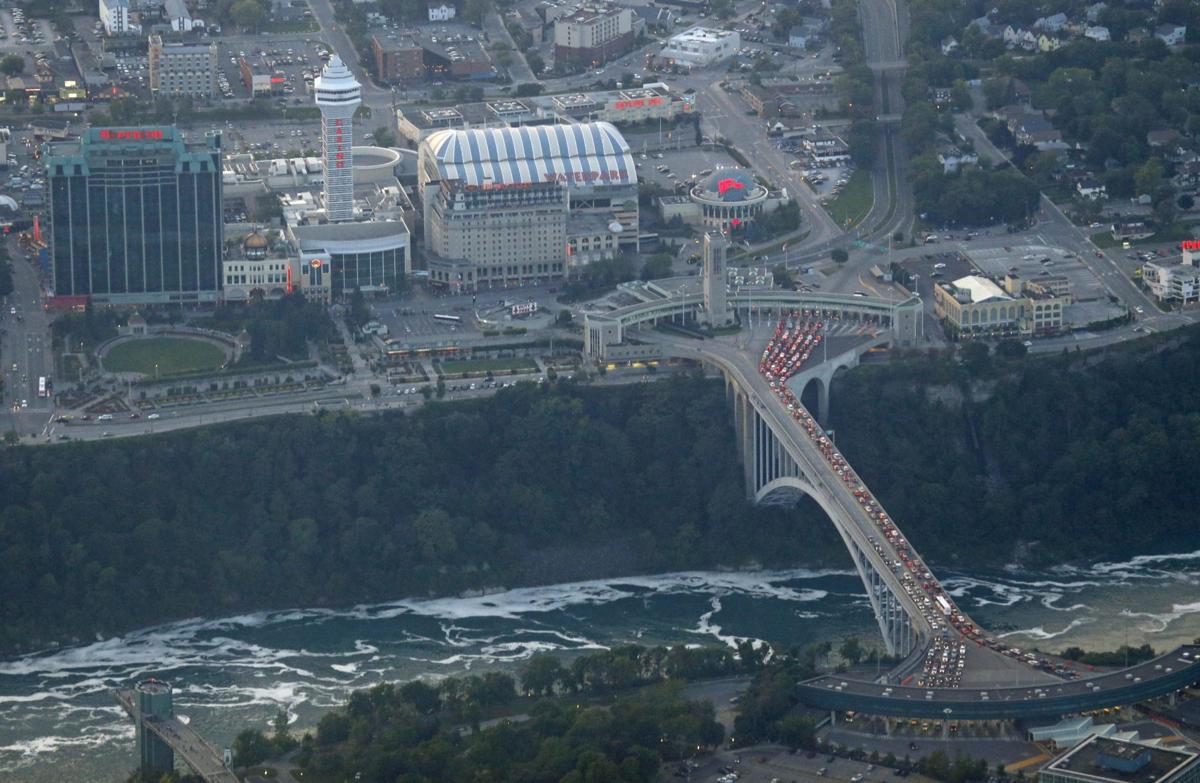 Niagara Falls, Ont., is booming with attractions and "is a much greater draw from a tourism perspective," says William Frye, associate professor of hospitality and tourism management at Niagara University. (Derek Gee/Buffalo News file photo) 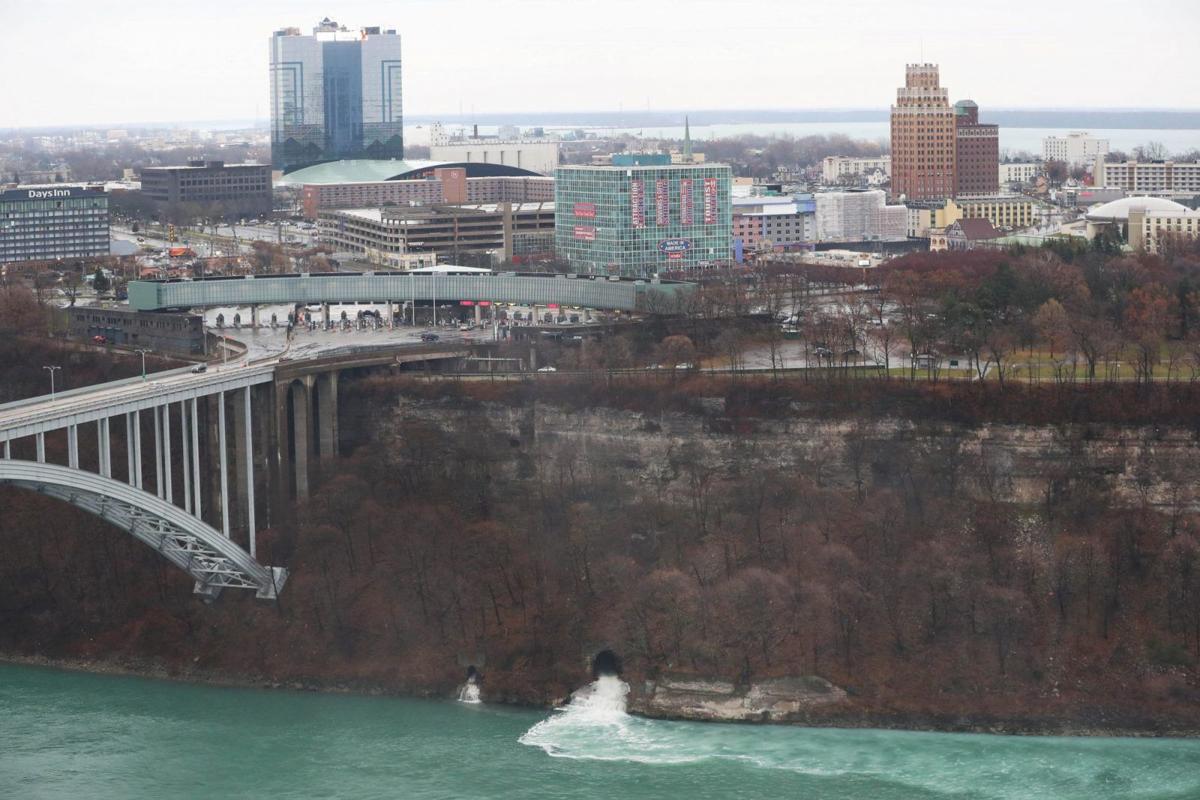 This November 2017 view of Niagara Falls shows treated sewage pouring into the Niagara River Gorge from a tunnel above the waterline. 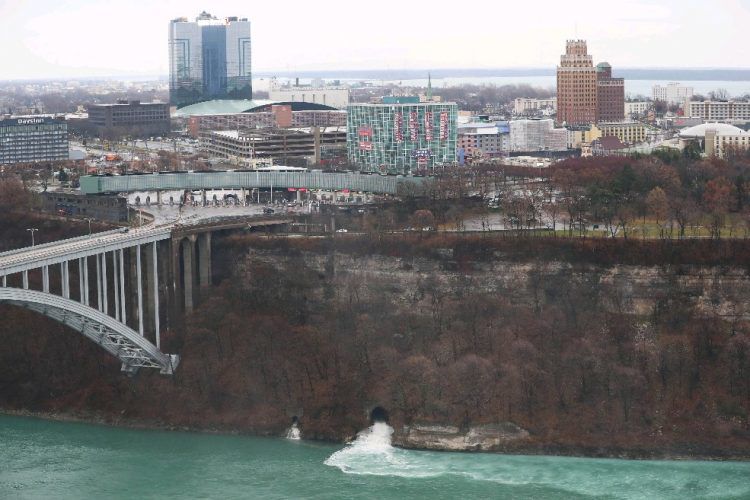 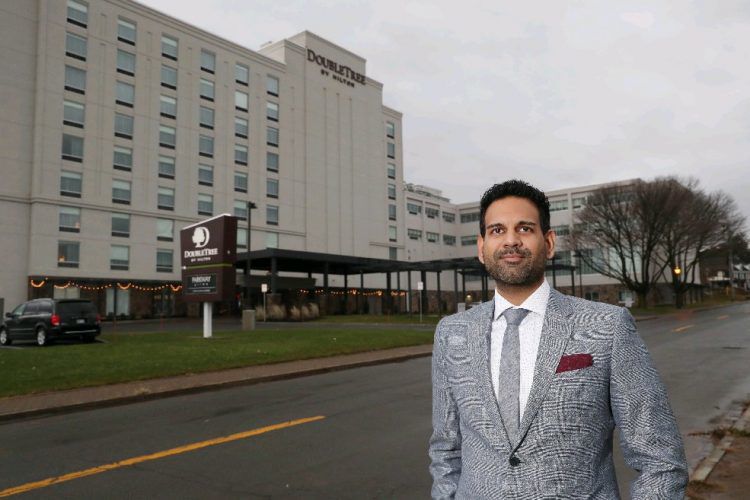 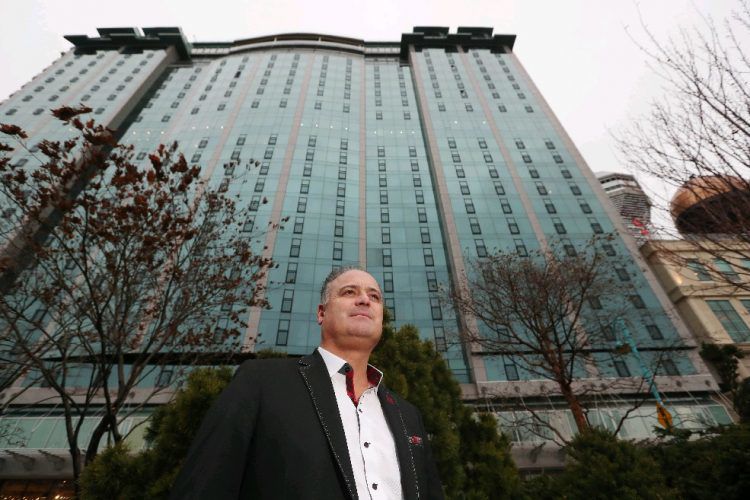 Michael DiCienzo and Faisal Merani each own hotels on the U.S. and Canadian sides of Niagara Falls.

Both Canadian businessmen also navigated approval processes for development projects in Niagara Falls, N.Y. That is where DiCienzo wants to build an indoor water park and Merani built a 191-room hotel that opened in January.

The two competitors disagree, with the role of government incentives on this side of the border coloring their opinions, even as state officials envision an end to an era of state hotel aid.

DiCienzo points to outsiders who help choose which projects get state financial incentives on the American side. Merani, meanwhile, cites the lack of any incentives in Canada, where they are forbidden by law, which gave the U.S. side an edge for his recent hotel project.

"Basically, it's free enterprise," DiCienzo said of Niagara Falls, Ont. "They let the locals who know the market develop the market and operate in the market."

And the other side?

"In Niagara Falls, N.Y., particularly with the state, they prefer to bring outside people in who don't necessarily know the market, and you have a political environment where they're trying to know what's right for the tourism industry," he said.

DiCienzo owns six hotels in Niagara Falls, Ont., and he plans to build three more there costing hundreds of millions of dollars. But in Niagara Falls, N.Y., where he also owns two hotels, DiCienzo has been stymied trying to build a $20 million indoor water park behind his Sheraton at the Falls on Third Street.

He's received state aid before, but he can't get a $2 million state grant he said he needs for the water park because the state is backing Wonder Falls, another developer's water park proposal, to be located a block from DiCienzo's site.

Merani, though, sees the benefits of the U.S. approach.

He used $2.75 million in incentives from New York State toward his $37 million DoubleTree by Hilton.

In recent years, with help from state and local incentives, downtown Niagara Falls, N.Y., has seen a hotel building boom.

There are 15 hotels, with a total of 2,807 rooms, between Niagara Falls State Park and the Niagara Scenic Parkway traffic circle, according to a new consultant's report obtained by The Buffalo News.

There are 12 hotels with nearly 5,000 rooms in the Fallsview District on the Canadian side.

Of course, developers consider more than incentives when deciding where to build, taking into account market conditions and costs.

Experts agree the Canadians have advantages — more attractions and a better view of the Falls — that outweigh any state aid package.

"It's a question of whether incentives can overcome fundamentals," said Isaac Ehrlich, professor of economics at the University at Buffalo. "Incentives always matter, but they matter on the margins."

"It's not always about grants and tax rebates or tax forgiveness or free money. The enterprise still has to be financially sustaining," said William Frye, associate professor of hospitality and tourism management at Niagara University. "Developers are smart people. They do their work-ups. Clearly Niagara Falls, Ont., is a much greater draw from a tourism perspective."

But more hotels are coming on the American side.

The Hamister Group's 128-room Hyatt Place hotel will open next year. The state paid the Buffalo company $3.85 million toward that $35 million project.

In July, Empire State Development chose a Syracuse developer, Ed Riley, to restore the vacant Hotel Niagara by 2019. The state bought it for $4.4 million and gave it to Riley's company for $1. The $42 million, 130-room restoration plan includes a $3.5 million grant and historic preservation tax credits.

Eight other Niagara Falls, N.Y., hotels have received a total of $9.25 million in state incentives for construction or expansion in the last decade.

One recipient was DiCienzo. The state's USA Niagara Development Corp. gave him $625,000 to add two restaurants to the Sheraton, and he is talking to USA Niagara about $1.5 million for renovation of the Days Inn in Niagara Falls.

Niagara Falls, Ont., had its hotel building boom in the 1990s and early 2000s after Casino Niagara opened. The biggest of all was the 56-story Hilton, Canada's tallest hotel tower.

DiCienzo, whose family business serves as Casino Niagara's landlord, doesn't see a need for more hotels on the U.S. side.

"In Niagara Falls, Canada, there really haven't been any rooms added in the past 10 years, so their supply (growth) is zero, but their demand is up considerably," DiCienzo said. "There you have more people wanting to fill those rooms, while here you have too many rooms and not enough people to fill them."

But DiCienzo's competitor, Merani, said he doesn't see room for growth on the Canadian side.

DiCienzo disagrees, saying there's plenty of activity on the Canadian side that should lead to more hotel demand.

"We have two casinos there, we have three water parks there, there's a 5,000-seat theater being built there that opens in the summer of 2019, and a huge convention center that just opened in the last six or seven years," DiCienzo said.

"I feel like we have a process that has been working," said Christopher J. Schoepflin, president and CEO of USA Niagara. "We've seen a strong uptick in private-sector investment on our side over the last number of years, and we're doing our best to continue doing that."

He pointed to the hotel boom and also to the state's investments in park improvements. That includes plans for the state to hire a developer to build new outdoor amenities. It also includes the planned removal of part of the Niagara Scenic Parkway, making the Niagara River Gorge more easily accessible to visitors by 2020.

"Just like any portfolio, you have to have a diversified approach," Schoepflin said.

If that approach results in longer stays by tourists, it will show the Niagara Falls, N.Y., hotel market is not oversaturated, Schoepflin said.

"There's some room to grow," he said. "I think there's some opportunity in the foreseeable future, but those things are never fully guaranteed and they're never irreversible, so you have to keep working on investment and attracting capital, both public and private, and that's what we continue to do."

The contrast with the Canadian side is "a really difficult comparison to make. The two cities are in different stages of development," Schoepflin said.

"Our neighbors in Canada, they've gotten a lot of public infrastructure over the last multiple decades and what they're focused on now is really relieving regulatory burdens," Schoepflin said. "On the U.S. side, we're implementing a vision, but with that vision we're investing hard capital dollars into both infrastructure and development projects. We have an obligation and a duty to try to achieve both the proper stewardship of those public dollars and to do it with speed. That's an inherent and healthy tension in that, and we're always trying to strike the right balance."

Although a park lodge was part of this year's state request for proposals, Schoepflin said the era of state hotel aid may end soon.

"As we start to work on this next phase, the extending-stay component, we'll say, 'Look, there's a lot of infrastructure connection to the waterfront, there's over 1,000 or 1,500 really solid hotel rooms, there's two or three major stay-extenders, so let's see where the private sector takes that market from there,' " Schoepflin said. "That's a year-by-year basis that requires a lot of detailed analysis, but I do see a point where, like many other markets, at some point you get to a baseline where the private sector can take it from there."

In the last decade, Niagara Falls, Ont., has approved many more hotels than have been built.

"There are 27 hotels that have been approved through the planning process in Niagara Falls (Ont.), and I think one has gone ahead," said Wayne Thomson, the former mayor, current City Council member and chairman of the city's tourism agency.

"Some of them get approved to add value to their property," Mayor Jim Diodati said. "We've had an awful lot of foreign investment over the last few years."

"When we're not building anything, we're going out to get approvals," said DiCienzo, who before his latest project had received approvals for five other Niagara Falls, Ont., hotels he hasn't built.

"Some projects are short-term, some are medium-term and some are long-term," DiCienzo said.

In Niagara Falls, Ont., government help takes the form of standing back.

It didn't take long for DiCienzo to win approval in late October for his $600 million three-hotel plan, totaling 1,811 rooms near the Skylon Tower.

"The staff had been working on it for a couple of months, but things move fairly quickly over here," Thomson said.

Not only are incentives to hotel developers illegal in Ontario, but developers must pay a fee to the local government, pegged to the size of the project.

DiCienzo's three-hotel plan would require him to pay about $4 million.

Diodati said the fee usually is directed toward infrastructure and other major projects. But the Niagara regional government is considering tripling the development fee, a proposal Diodati opposes.

"It would be nice if they could come back with a freeze in the development fee for a period of time to stimulate the development of the previously approved hotels," DiCienzo said.

On the American side, DiCienzo announced the $20 million plan for the Niagara Daredevil Waterpark in May.

The state rejected DiCienzo's bid for Wonder Falls, and he tried for months to find out why.

"I think a lot of the cold shoulder we're getting has to do with that," DiCienzo said. "We waited five months for that meeting and it lasted 20 minutes. They wouldn't answer our questions. Every time we asked a question, they told us to file a FOIL (Freedom of Information Law request)."

"We're very calculating in our decisions, and $2 million, compared to what's been offered out there to other people coming in from outside the marketplace, is not a lot of money," DiCienzo said. "Their position is that we're going to build this water park with or without their help."

"I'm not sure the city needs two water parks, but at some point the state should be throwing their weight behind the one that can get done," Merani commented. He wouldn't say whether Uniland or DiCienzo should be that developer.

Penguins mail their Christmas letters to Santa at UK zoo

Penguins mail their Christmas letters to Santa at UK zoo

Niagara Falls, Ont., is booming with attractions and "is a much greater draw from a tourism perspective," says William Frye, associate professor of hospitality and tourism management at Niagara University. (Derek Gee/Buffalo News file photo)

This November 2017 view of Niagara Falls shows treated sewage pouring into the Niagara River Gorge from a tunnel above the waterline.