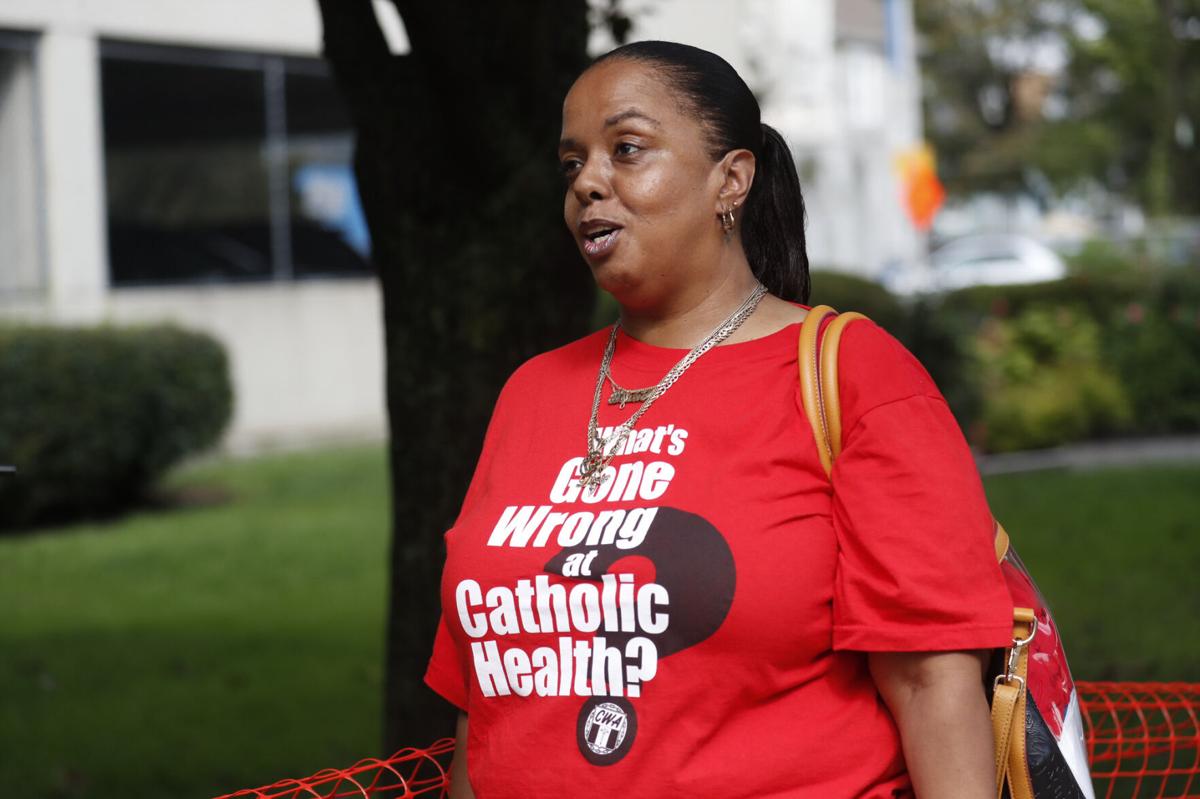 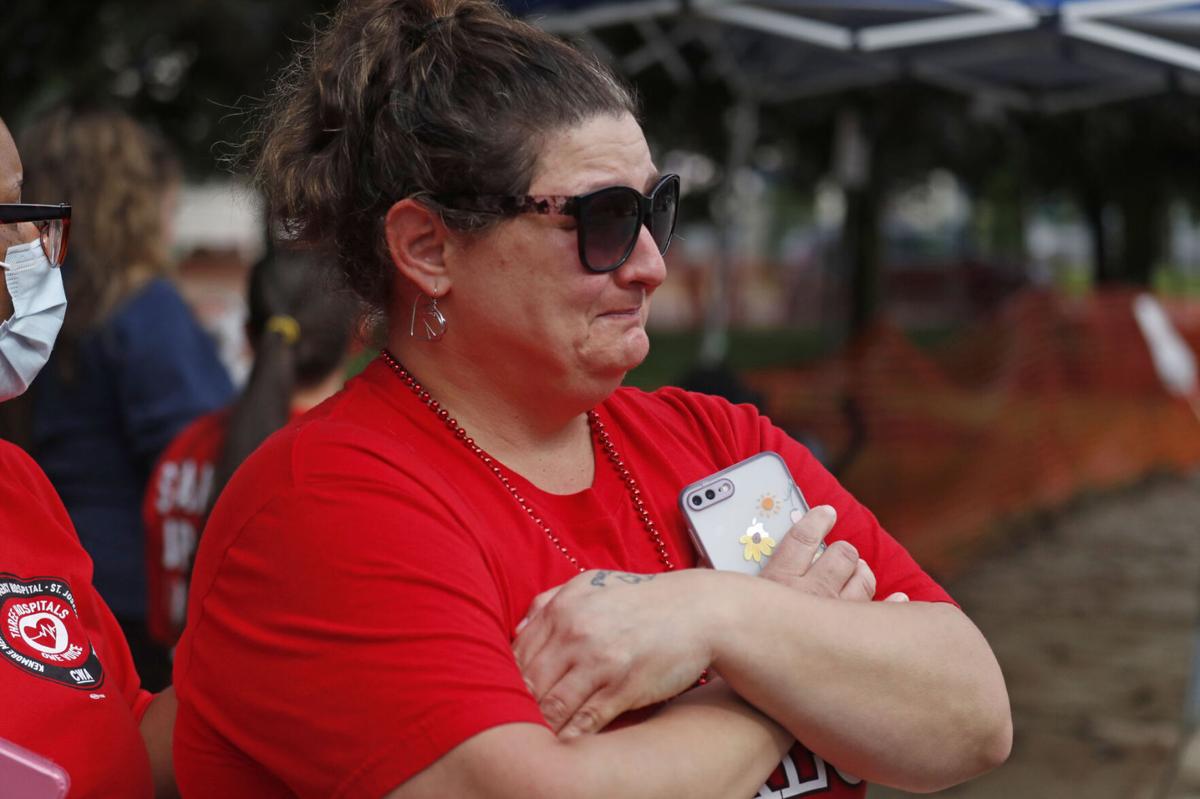 Jamie Kaye, of Depew, a hospitality worker, near the main entrance of Mercy Hospital Monday on Abbott Road in South Buffalo.

Diane Peach has worked in environmental services at Mercy Hospital in South Buffalo for 3½ years, part of the team that keeps the hospital clean – a responsibility that can involve cleaning up blood and other bodily fluids.

That job has become even more difficult in recent months, with rising wages in other industries luring many of her co-workers to chase higher pay elsewhere.

That has put more burden on Peach and other environmental services workers, creating a staffing squeeze at the hospital that her union is seeking to alleviate via ongoing negotiations with Catholic Health System.

It's put workers like Peach at the forefront of the contract talks, with the union pushing for higher wages for its lowest-paid members and also increased staffing. Catholic Health said its most recent proposal could allow some of those workers to see first-year raises of more than 8%.

It also comes at a time when the competition for low-wage workers has intensified as employers struggle to find entry-level and part-time employees, giving those workers more employment options to consider.

One way to retain workers, Peach believes, is to raise their wages. Peach said she makes less than $14 an hour.

For comparison, workers at Buffalo-area McDonald's and Tim Hortons locations start at $15 an hour. The minimum wage across upstate New York is $12.50 an hour, and it will be rising to $13.20 an hour at the end of this year.

“I do a good job," said the 50-year-old South Buffalo resident. "But then when I get my paycheck, I can barely pay or I have just enough to pay the bill, and then nothing left for me. That’s sad. I feel like we shouldn’t have to live like that or think like that, when you’re working in an environment like this.”

The strike at Mercy Hospital, in its fifth day Tuesday, involves many employees like Peach. The environmental services and dietary department workers, for instance, are some of the lowest-paid employees at the facility but serve as an essential cog in the wheel who help keep Mercy Hospital running. One registered nurse on the picket line early Friday morning called them "the backbone" of the hospital.

The Communications Workers of America Local 1133, which represents about 2,500 workers at Mercy Hospital, Kenmore Mercy Hospital and Sisters of Charity, St. Joseph Campus, said the hire rate for dietary aides and environmental services workers is $13.45 an hour, with a maximum pay of $17 an hour.

That pay range has made those positions susceptible to wage pressure from other industries, especially since housekeepers and food service employees at the hospital have skills that easily transfer to alternative fields.

Catholic Health spokeswoman JoAnn Cavanaugh declined to comment for this story, citing a "need to stay focused on negotiations."

But in previous comments to The Buffalo News, Cavanaugh said Catholic Health is actively recruiting to fill jobs but has faced some of the same challenges as other employers around the country struggling to hire in a tight labor market. The health system is working with recruiters locally, statewide and nationwide, and conducting virtual and in-person interviews of candidates, she said.

"Introducing staffing ratios to the contract during a national labor shortage, as the union is proposing, will not create a competitive advantage for Catholic Health hospitals, nor will it help recruit and retain nurses and other health care workers," Cavanaugh said.

In an offer to the union before the strike started Friday, Catholic Health proposed that service, technical and clerical employees see an average wage increase of 8.4% in the first year of a contract, followed by 2% raises in the second and third years and 2.75% in the fourth. In terms of staffing, Catholic Health has proposed investing $20 million and also hiring 258 full-time-equivalent positions.

But there is more to consider than wages. Health care service positions are more likely to be full time and come with benefits, something that can be difficult to find in fast-food settings, noted Julie Anna Golebiewski, a Canisius College economist.

Some of the staffing shortfalls also could be explained as yet another piece of the pandemic ripple effect.

For example, Golebiewski said, many health care providers early in the pandemic laid off some of the lower-wage service employees while the moneymaking elective procedures were temporarily suspended, pinching hospital finances.

When that occurred, it's possible some of those health care workers found jobs in other industries that paid a higher hourly wage, especially during a pandemic that led to hazard pay in grocery stores and other settings.

"When they went to those industries, it's not clear to me that they went back to health care when the economy reopened," Golebiewski said.

In fact, she said, there were 5,800 fewer jobs in the Buffalo metro area's health and social assistance industry this July as compared to July 2019. In contrast, the region's accommodation and food industry – one of the hardest-hit sectors during the pandemic – is just 1,800 jobs behind its July 2019 level.

Boosting pay would certainly help retain staff, something environmental services worker Kimberly Hayward would welcome. With the short staffing before the strike, the 51-year-old West Seneca resident said there was more to clean than could be done in an eight-hour shift.

"It’s the lower-paid ones that’s doing the work to keep these patients in a safe and clean environment. If we had higher wages, it would be easier to keep people," said Hayward, who has worked at Mercy Hospital for three years and makes just over $15 an hour.

Jamie Kaye has seen that play out up close.

A nine-year Mercy Hospital employee, Kaye works in the gift shop at the hospital and is part of the dietary department. With the staffing situation, she has been pulled in to help pass trays and feed the hospital's patients.

"A lot of people leave because the pay is not strong enough, and they go to other departments within the hospital or even leave because it’s a lot," said Kaye, who makes just under $16 an hour. "And then with the short staffing, it wears everybody down. ”

While she's thought about leaving for a higher wage elsewhere, Kaye, a 44-year-old Depew resident, said she enjoys her job and feels like she's part of team that works together to take care of patients.

She just wishes it paid better.

"I think the wages should be better," Kaye said. "I mean, you could go anywhere and make $17 an hour. This is Catholic Health. We do good things here."

A beauty salon becomes a refuge for women in Kabul

A beauty salon becomes a refuge for women in Kabul

Toddler takes her first steps thanks to prosthetic legs

Toddler takes her first steps thanks to prosthetic legs

Catholic Health, union return to the table: 'Staffing is really our core issue'

What's the economic cost of Mercy Hospital strike? Both sides feel the pain

Jamie Kaye, of Depew, a hospitality worker, near the main entrance of Mercy Hospital Monday on Abbott Road in South Buffalo.