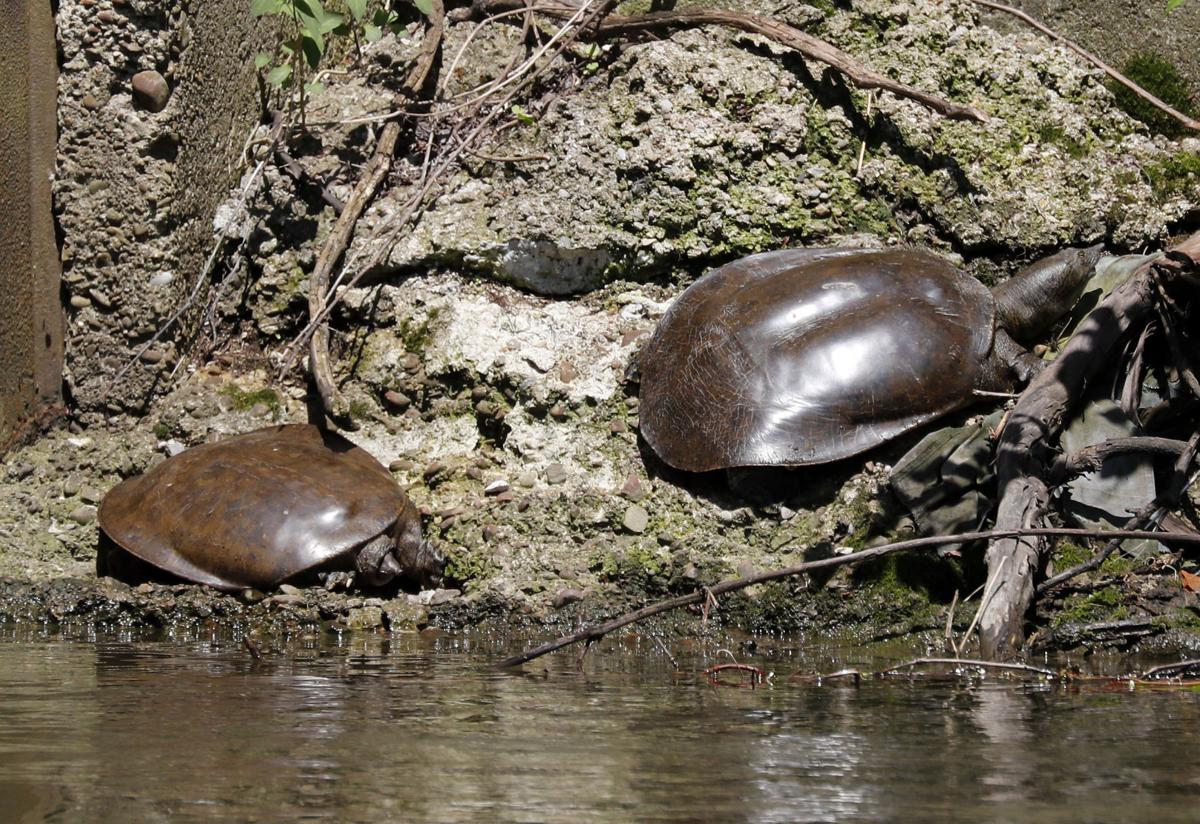 Spiny softshell turtles bask in the sun this spring along the Chadakoin River in Jamestown. (Mark Mulville/Buffalo News) 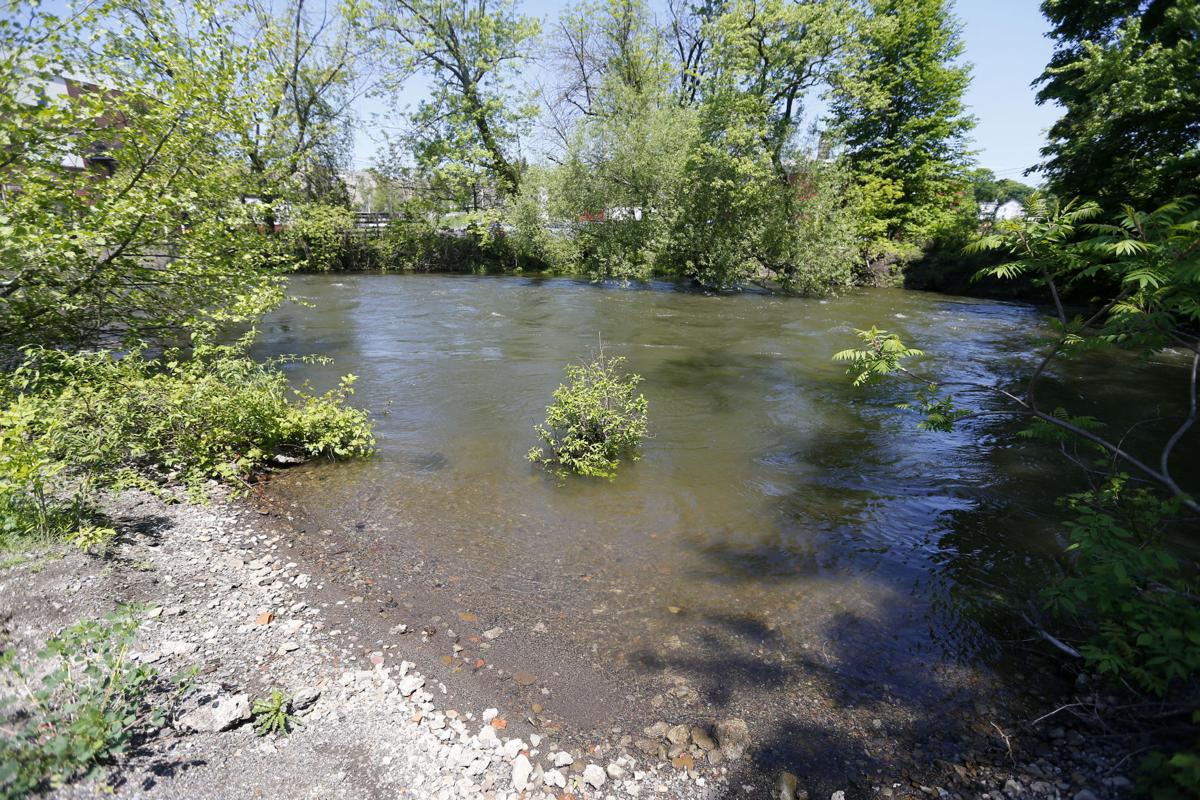 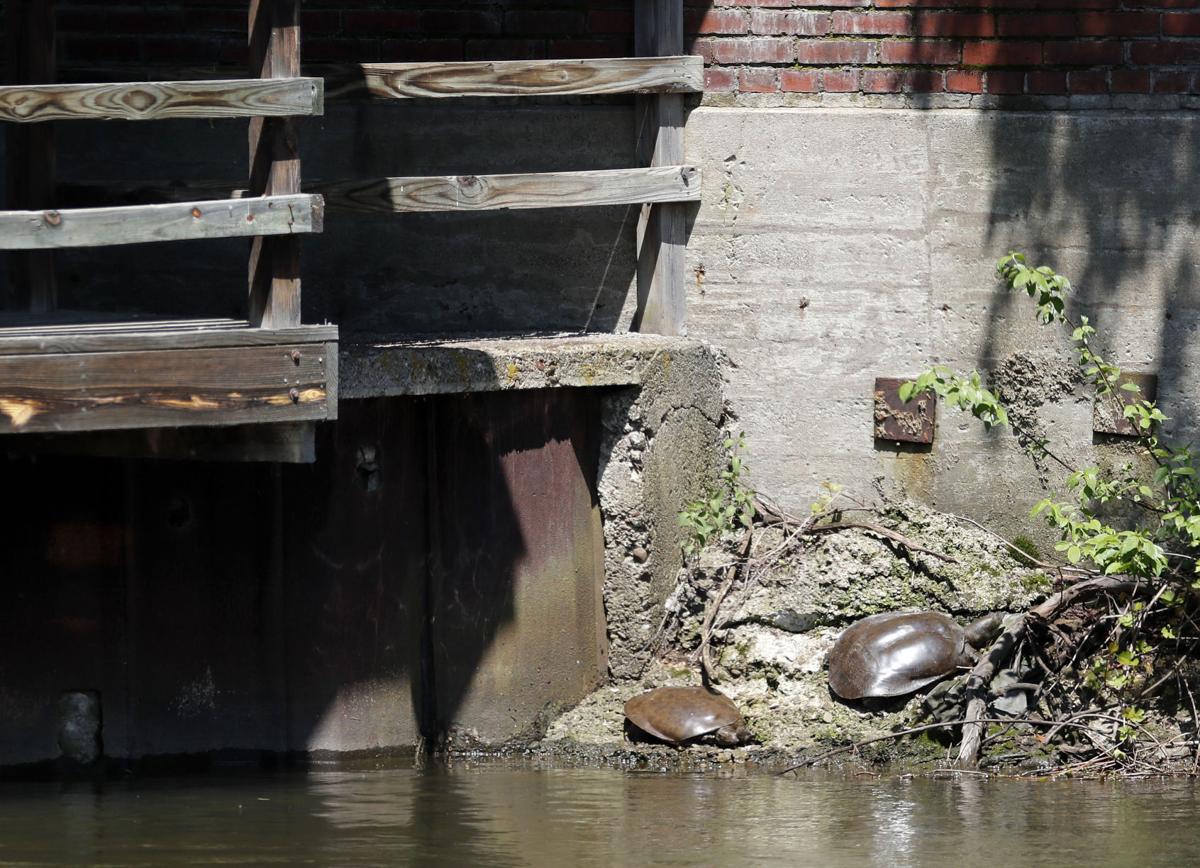 Spiny shell turtles bask in the sun along the Chadakoin river in Jamestown Thursday, May 24, 2018. (Mark Mulville/Buffalo News) 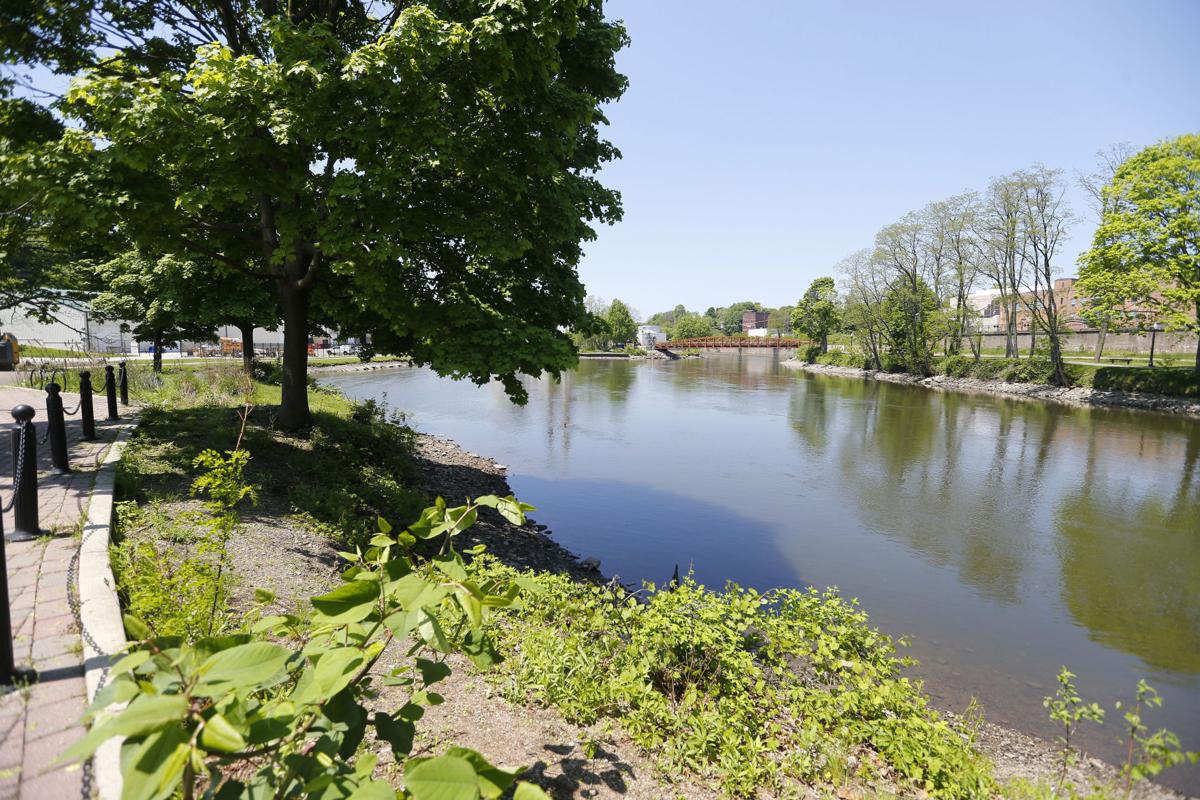 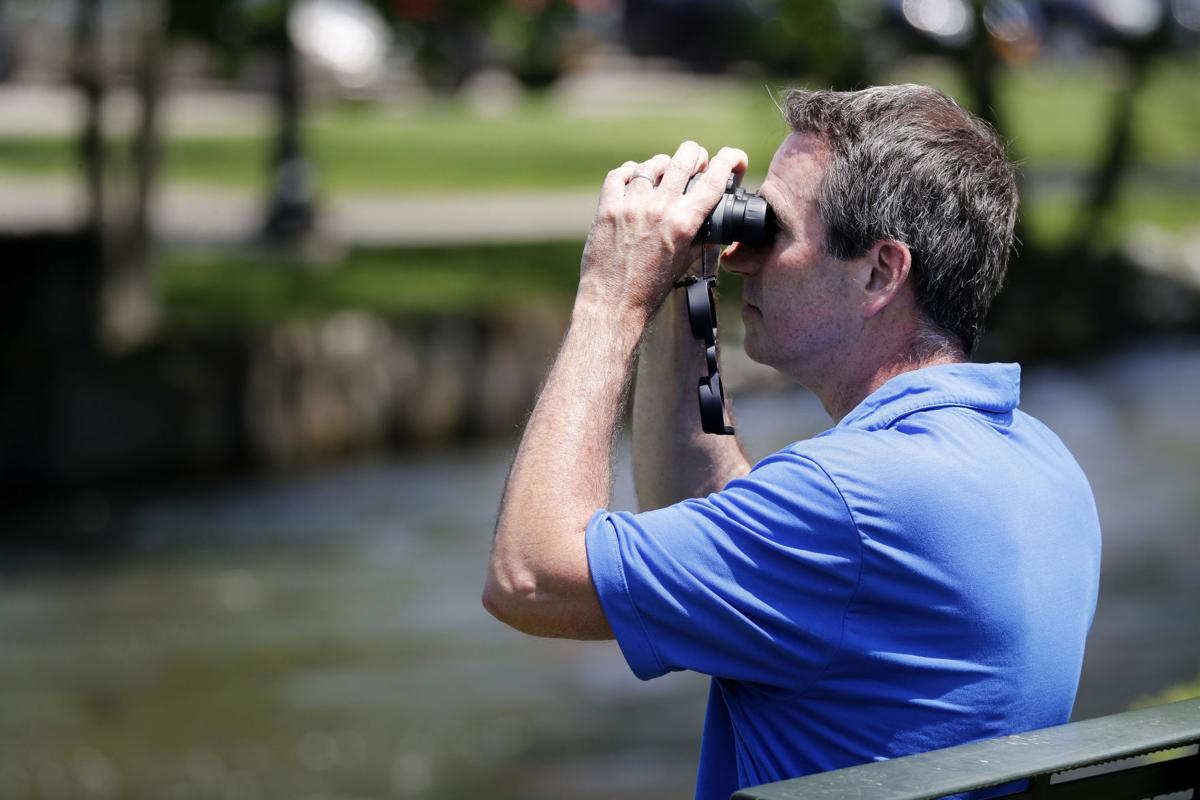 JAMESTOWN – When the shadows behind the sprawling brick-facade of the Riverside Business Center give way to sunshine, spiny softshell turtles find their basking place along a ledge near the Chadakoin River.

They probably had been doing it for decades without much fanfare, until Twan Leenders came to town.

Leenders, a native of the Netherlands, is the herpetologist who came to Jamestown from Connecticut six years ago to lead the Roger Tory Peterson Institute of Natural History.

“When someone showed me the turtles, my jaw just dropped,” said Leenders, the institute’s president. “These were not just turtles; these were turtles that were not supposed to be in New York State at all.”

On July 7, Jamestown will open a pair of new recreational Riverwalk trails along the Chadakoin.

The city – after consultations with Leenders and the institute – adjusted its construction specifications to aid its rare resident turtles. More rocks were added to projects along the Greater Jamestown Riverwalk. “Turtle ladders” – stones that help turtles get from the water up onto the river bank – were also installed.

“It’s pretty cool from a layman’s standpoint – you see a turtle the size of a big frying pan,” said Jeff Lehman, the city’s public works director. “We’re making an effort to promote them.”

The next phase of the ongoing Riverwalk project will be off of the eastern side of Panzarella Island Park near the city’s power plant. It’s expected to include backfilling a portion of a man-made cove to create an emergent wetland along the river with native plants.

Incorporating the turtles – and the environment – into the city’s recreation and development plans along the Chadakoin could be critical to their future survival.

“They make really good mascots for this type of stuff,” Leenders said.

The institute confirmed that spiny softshell turtles successfully breed between an upper dam near Washington Street and another one downstream near Buffalo Street.

“It’s starting to look like this entire population of turtles lives within this little area," Leenders said "This is sort of the hot spot for us.”

Downtown Jamestown doesn't look like it would fit the part of a prime turtle habitat. The Chadakoin’s channelized river corridor through downtown Jamestown limits suitable nesting substrate for the turtles.

Spots where female turtles lay their eggs – like behind the St. Susan Center soup kitchen on Water Street – have historically been predated by egg-snatching raccoons.

“It's like complete carnage,” Leenders said of recent years’ clutches in that spot. “Most of them don't make it.”

Even so, the turtles – which can live upward of 60 years – have found ways to adapt to their urban setting.

It's where they hibernate in the river, mate and breed.

In New York State, the spiny softshell turtle is listed as a species “of special concern." The state Department of Environmental Conservation considers those species as ones that “warrant attention and consideration” without reaching endangered or threatened thresholds, based upon current data.

The most recent DEC maps confirm there were 20 reported occurrences of the spiny softshell turtle species statewide between 1990 and 2007.

Maps show that four reports occurred in southeastern Chautauqua County. Others were in southern Cattaraugus County, the Finger Lakes, along Lake Ontario and a pair of scattered reports from the mouth of Cattaraugus Creek and the Albany area along the Hudson River.

Leenders said, from a scientific perspective, not a lot is known about Jamestown's spiny softshell turtle population. It's why the institute has expanded its attempts to observe the turtles and their behavior.

The institute invited interns from nearby SUNY Jamestown Community College and the SUNY College of Environmental Science and Forestry to help in its early research and, over the course of the last three years, has involved high school and college "youth ambassadors" as part of its Project Wild America initiative.

The students use the Chadakoin as an outdoor laboratory to help the institute gain a baseline understanding for the spiny softshell turtle populations in the river.

"We can learn something from this population," Leenders said. “The key things are to get a good understanding what we have here.”

Why should it matter?

“Even if you don’t care about the turtles, these things tell you about the water quality in your backyard,” Leenders said.

Leenders said it's why the Chadakoin's source waters – Chautauqua Lake – shouldn't be choked with pesticides or agricultural phosphorus that leads to harmful algal blooms and reduced oxygen in the water. Spiny softshell turtles can only live and thrive in areas where the water is clean and highly oxygenated.

Estimates are there could be 100 to 200 adult spiny softshell turtles living between the dams in Jamestown.

"We were stunned and thrilled to see (them) thriving in a truly urban environment," said Dale A. Weiler, a renowned wildlife sculptor from North Carolina who's donating his work to help fund Project Wild America at the institute. "We were equally impressed with how the local population was doing their part to make the turtles' environment as safe and accommodating as possible."

The spiny softshell turtle is one of five known turtle species to occupy that area.

Others include the snapping turtle, common musk turtle, painted turtle and the invasive red-eared slider, which has established populations in Jamestown.

Once some of the initial scientific research is done about the spiny softshell turtle population, their behavior and their habitat needs, the institute can make further recommendations as to how conservation efforts should proceed.

Like the turtles themselves, Leenders said the institute will take a slow and steady approach.

“Whenever you’re talking about things with turtles, everything takes decades," Leenders said. “Everything we do now will have a trickle-down effect that we won’t see until 30 or 40 years down the road.”

"Nothing happens quickly in a turtle's life span," Leenders said.

Spiny softshell turtles bask in the sun this spring along the Chadakoin River in Jamestown. (Mark Mulville/Buffalo News)

Spiny shell turtles bask in the sun along the Chadakoin river in Jamestown Thursday, May 24, 2018. (Mark Mulville/Buffalo News)