In Buffalo Bills' stadium talks, one branch of state government is left out
0 comments
Share this 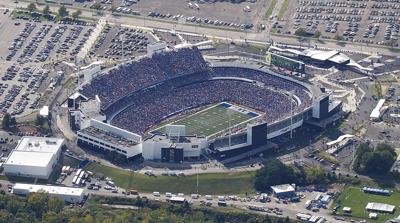 ALBANY – The New York State Legislature decides hundreds of billions of dollars in spending, from how much school districts receive to which roads and bridges are repaired.

So what role will it have in deciding whether to build a stadium for the Buffalo Bills?

That’s uncertain, largely because no one yet knows the ways taxpayers might help fund the $1.4 billion project – if a deal is made.

What is certain is that state lawmakers don’t have a seat at the negotiating table, now made up of representatives from the Hochul administration, the Erie County executive and the team.

For some state legislators, that is understandable.

“We’ve never had 150 members discussing a contract,’’ said Assembly Majority Leader Crystal Peoples-Stokes, a Buffalo Democrat. “But I can see 150 members having a discussion on a state contribution, because that’s obviously a budget thing.’’

Other lawmakers, though, want a more direct role in the talks, and they would like it now.

“A generational decision like this shouldn’t be made in the dark," said Assemblyman Pat Burke, a Buffalo Democrat whose district includes the team’s present and proposed future home in Orchard Park. "There needs to be greater transparency, and elected state representatives of the people most impacted by this decision ought to have a seat at the table.’’

Peoples-Stokes, one of the most powerful lawmakers in Albany, believes lawmakers will play a role when discussing how much will be asked of state taxpayers to help finance a new stadium.

Like other lawmakers, she says a flow of information to lawmakers is important during the discussions.

Who plays what roles

State taxpayers will end up paying the largest share of any government financing of a new stadium.

The Hochul administration said the state is still in the fact-finding stage of the process. A private firm is conducting a study to assess different options for the stadium.

“Gov. Hochul is committed to a collaborative approach to protect taxpayers and ensure the longevity of the Buffalo Bills in Western New York, and legislators will continue to be involved and consulted on the process, especially since any deal would require approval of funding,’’ said Matt Janiszewski, a spokesman for Hochul.

In that deal, the Erie County Legislature had to approve – which it did unanimously in early 2013 – the renovation and lease deal for a stadium that is county-owned.

On the state’s behalf, the deal was approved by the state’s Empire State Development, the main economic development agency for the executive branch, as well as a special authority created to handle the stadium work.

But the state Legislature's role was an important one: approving $60.5 million for the first year of the state’s financial contribution to the deal, including $53.9 million in a one-time payment to support stadium renovations, according to Freeman Klopott, a state Budget Division spokesman.

Indeed, it is a role that has continued each spring when a new state budget is adopted, and buried deep within the annual fiscal documents are line item payments for the first nine years of the lease signed in 2013. Year after year, the line items – which says the money is going to keep “professional football in Western New York” – is approved with little or no debate by lawmakers.

Besides the upfront money paid in 2013, the state is responsible for $19.2 million for capital improvements and $39.1 million for operating aid in total over the span of the contract's first nine years. It has done so via annual state budget allotments.

Public funds in the deal

Assemblywoman Monica Wallace, a Lancaster Democrat, echoed other lawmakers who said she supports spending some level of state money to keep the team in Buffalo.

As for the role of state lawmakers, Wallace said: “It’s our job to direct state resources to address the needs of our community and our region. Our role is to make sure taxpayer money is being spent responsibly, which means we absolutely should participate in the discussions and weigh in on how much money is appropriate and how that money should be spent.”

Given the stakes, as well as the potential size of what will be asked of state and county taxpayers, some lawmakers say the Western New York delegation, at the very least, should have a voice in the deal before the ink dries on any potential agreement.

But a seat at the negotiating table?

“Yes, certainly before a final agreement is reached, and especially if state support is a component of a proposed agreement, we ought to have opportunities to lend voices to the expressed concerns and desires of our constituents,’’ said Assemblyman Bill Conrad, a Town of Tonawanda Democrat.

“The Bills are a Buffalo treasure, and none us wants to see the team move elsewhere," Conrad said. "But a new football stadium can’t be built solely on the backs of our taxpaying citizens. We need private investment, and we need solid data that reflect the Bills’ economic impact and value here locally. The benefits of a new stadium to Buffalonians and New Yorkers are quantifiable – and the public’s financial contribution has to be proportionate to that benefit,’’ the lawmaker added.

The ongoing secrecy of the negotiations has drawn a response from the Erie County Legislature, which last month passed a nonbinding resolution calling on the Poloncarz administration to provide a regular flow of information about the discussions.

There is no formula for how pro sports stadium and arena deals get green-lighted. Decades of such deal-making nationwide depict varied routes.

Some have taken the form of directly involving voters. One such ballot initiative, in 2016, was put to voters in San Diego, who were asked by the NFL Chargers to support a plan, which included raising the local hotel occupancy tax, to bring a new stadium to the city’s downtown. Voters defeated the ballot question. The team now plays in Los Angeles.

Two decades earlier, the Maryland governor and state lawmakers wrangled over plans for two new NFL stadiums – one for the Washington Football Team and the other for the Baltimore Ravens. In the end, the deal was approved by state lawmakers in 1996, according to various media reports at the time, but only after then-Maryland Gov. Parris Glendening agreed to mollify anti-stadium views by some state lawmakers by providing tens of millions of dollars in specially earmarked state funding for schools in legislators’ districts.

The National Sports Institute at Marquette University’s School of Law has reported there were 50 referendum measures that made it onto ballots in states and cities between 1990 to 2017 involving a wide assortment of financing arrangements for pro sports stadiums and arenas. Thirteen were defeated.

No one has discussed, at this point, any kind of a referendum being a part of a new stadium effort for the Buffalo Bills.

There are many ways the public could help support a new stadium, from land deals and property tax abatements to direct cash and borrowing initiatives.

One state entity that could come into play is the Public Authorities Control Board, called the PACB, which requires 11 statewide public authorities to get its approval for any project-related financing. The board, composed presently of three state lawmakers and chaired by Gov. Kathy Hochul’s budget director Robert Mujica, regularly approves grants and loans by Empire State Development, which is the state agency playing a key role in the Bills’ stadium discussions.

One PACB member, Assemblyman Joseph Giglio of Gowanda, said it depends on where the resources are to be derived whether the board considers some components of a Buffalo Bills’ new stadium financing arrangement. Giglio has a voice during the PACB proceedings, but as a member of the minority Republican Party, does not get to vote.

But before any potential vote by the Legislature or the PACB, Giglio believes there should be a direct role for lawmakers in the stadium discussions.

Giglio dismissed concerns that permitting lawmakers into the stadium talks would get unwieldy or lead to leaks out of the secret talks. He said designees of the two houses could be appointed to keep the representation small.

Assemblyman Jonathan Rivera, a Buffalo Democrat, said the region has an “irrevocable emotional attachment” to the Bills. “As state lawmakers and local leaders, our responsibility is to our constituents, and we provide input where applicable in that regard. Ultimately, New York State and Erie County will lead these negotiations, and I trust that Gov. Hochul and County Executive Poloncarz will deliver the best deal for all New Yorkers,’’ he said.

But Giglio said: “I don’t think it’s a trust factor. You have to have all partners involved,’’ he said, to ensure surprises and bumps don’t emerge after the secret talks end with, the sides hope, a final stadium deal.

State Sen. Sean Ryan, a Buffalo Democrat who represents Orchard Park, said lawmakers must have their voices heard throughout the negotiating process if taxpayer funds are used. But, he said, he doesn’t expect to be involved in any of the day-to-day negotiations.

“Each party has a representative at the negotiating table and when all is said and done, we will weigh in on whether the terms are acceptable,’’ he said of the Legislature’s role.

Another Buffalo Democrat, Sen. Tim Kennedy, has confidence in the Hochul administration leading the negotiations for the state.

“We know we have a great voice,’’ he said of Hochul. Kennedy said she “understands the role of the Bills’ impact on our state and region.’’

In the end, depending on the financing sources, lawmakers expect any Bills’ stadium subsidies will be contained in the state budget – possibly as early as next spring’s budget.

“Our main role is to make sure we represent our constituents, and overwhelmingly our constituents are saying ‘do what it takes to keep the Buffalo Bills in Buffalo,’ ’’ the senator added.

Legislators unanimously adopted a resolution Thursday that would allow for a 30-day public comment period prior to a vote on a stadium lease agreement.

The county executive said lease negotiations would be hurt if county legislators or state lawmakers were given information about the status of bargaining over the stadium.

How do Buffalo Niagara's small-market realities impact negotiations over the Bills stadium?

Economic efficiency is likely to be a theme no matter what happens with a new facility, even as the Hochul administration keeps open the possibility of a downtown location or the option of a renovated Highmark Stadium.