Virus update: Fauci agrees 'right on the spot' to serve Biden; Thanksgiving travel numbers are in

In Buffalo, a Ketchum medalist sees her dreams in written words
0 comments
Share this
Support this work for $1 a month
1 of 3 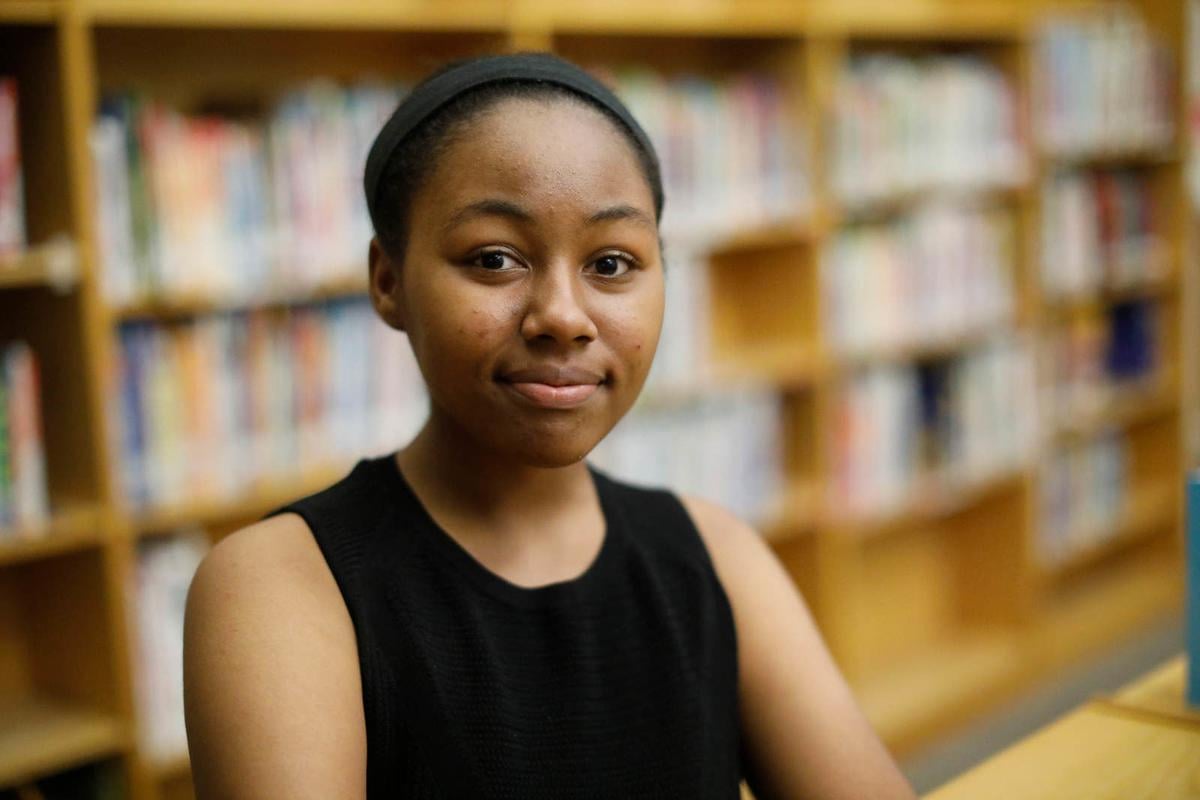 Krystal Brumfield in the library at Harvey Austin School, where academic achievement made her recipient of the Jesse Ketchum gold medal for 2019, symbolic of being the top student among all eighth graders in Buffalo. She is now in ninth grade at City Honors. (Derek Gee/Buffalo News) 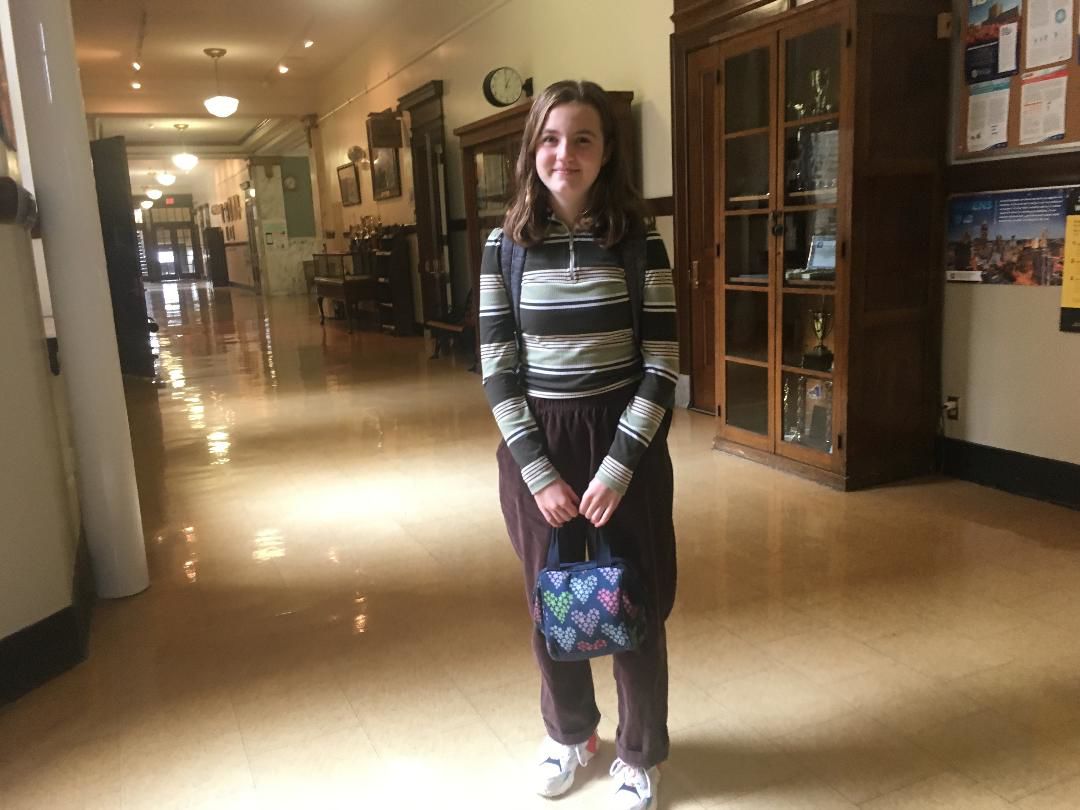 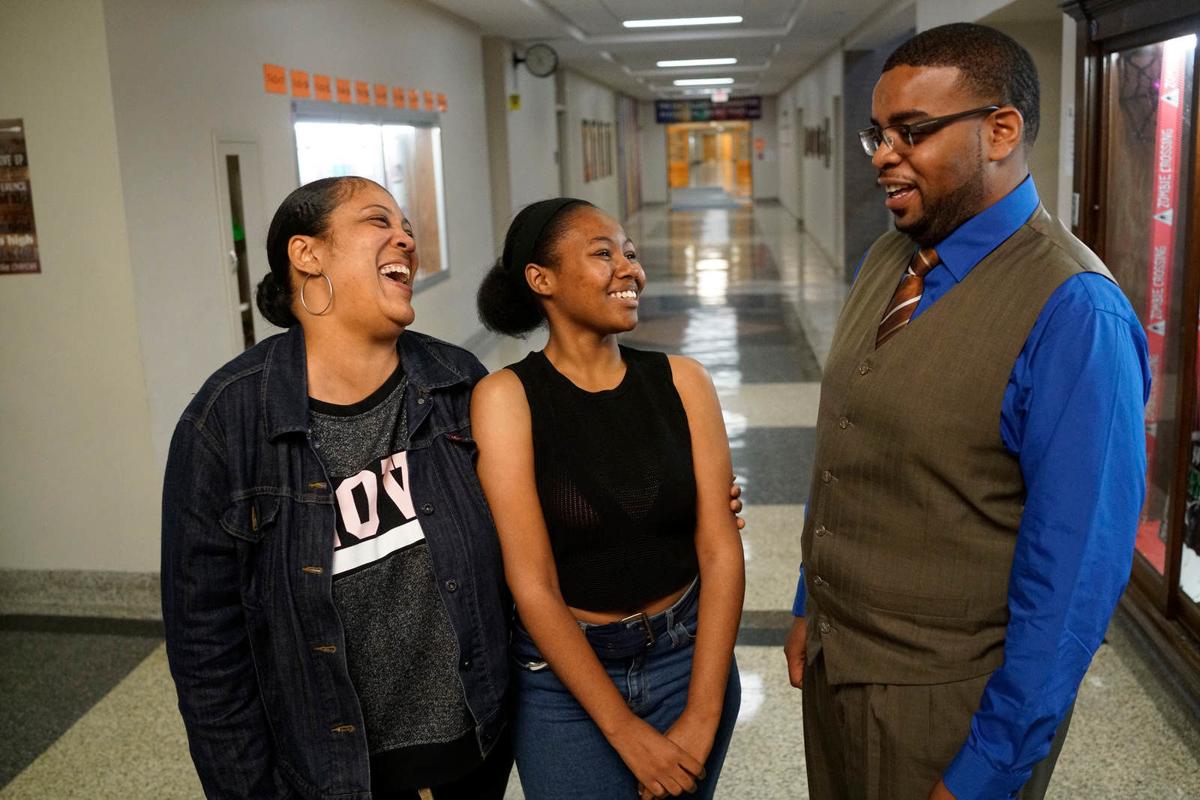 Krystal Blumfield, 14, at Harvey Austin School, where she became the top student in the district, Thursday, Oct. 17, 2019. She is now in ninth grade at City Honors. She chats with her mother, Novella Howard, left, and Harvey Austin Principal Demario Strickland. (Derek Gee/Buffalo News)

Julie Curtin, an English teacher in the Buffalo city schools, said it quickly became clear that Krystal Brumfield was among the most talented young writers she had ever met.

Yet Curtin guarantees that Brumfield is only going to improve, because the teenager already understands that fine writers often learn through the most direct of passions.

They read. Brumfield, at 14, is always hungry for a book. The rhythm of great authors stays with her, like music. From the moment Brumfield sat down in Curtin's class a few years ago at the Harvey Austin School in Buffalo, the junior high student would lock into a book. She put it away when the time came to do her work. Once finished, immediately, the book came out again.

“The way she can put words together is just beautiful," said Curtin, who now teaches at the International Preparatory School at Grover Cleveland. "In 20 years of teaching – in public, private and charter schools – she’s the best of the best when it comes to work ethic and talent and her willingness to help other students."

Curtin was not surprised, then, to learn what will happen at 6:30 p.m. Tuesday at West Hertel Academy, when Brumfield – a freshman this autumn at City Honors – accepts an academic award of unique meaning to Buffalo, part of a scholastic tradition that began in 1873.

Thirty-five teenagers will receive the Jesse Ketchum Medal, honoring the finest students at every school from the previous year's eighth grade. The ceremony is the long running result of a fund that memorializes Ketchum, a 19th century humanitarian and early champion of Buffalo public education.

In a crowning annual moment, the district spotlights the top two eighth-grade achievers in the entire city. Brumfield earned this year's gold medal with a 99.58 scholastic average, while Evelyn Gardner of City Honors – the two young women are now classmates – will receive the silver, at 99.50.

The event has particular resonance at Harvey Austin, one of dozens of public schools throughout New York whose academic struggles put them under state receivership. Demario Strickland, in his fourth year as principal of the school on Sycamore Street, said the state found “demonstrable improvement” at Harvey Austin for the past two years.

To Strickland, Brumfield is a living statement on the potential of those students, and a reminder of how many come to school prepared to learn. With such high grades, Strickland said, Brumfield could have transferred to another school before her eighth-grade graduation. Instead, during an interview Thursday, she said she had no wish to be anywhere else.

“Most of my friends were here, I had a good relationship with my teachers and I just felt I should be here,” she said of Harvey Austin.

Twenty years ago, Strickland was the winner of a Ketchum Medal as valedictorian at Community School No. 53. But he said there was a major difference between his experience and Brumfield's. Strickland recalls being relentlessly taunted for the way he embraced schoolwork, a reality that made those years a painful time.

He and Amanda Kulinski, a school counselor, say something in Brumfield’s aura, in her bearing, was powerful enough to ward off such cruelty, even amid times of noise and distractions. Kulinski said Brumfield, who was a class officer and ambassador at Harvey Austin, has a presence and quiet confidence that generates respect, lifting other children who are drawn toward academics.

The medal presentation will include a few new elements, according to Fatima Morrell, an associate superintendent and president of the Jesse Ketchum Memorial Fund. She said Bill Greco, a Ketchum recipient more than 50 years ago, now serves as historian for the event.  Not long ago, archivists at the Buffalo History Museum told Greco they found the original sheet music for "Friendships Offering," a song written in 1851 in Jesse Ketchum’s honor.

Greco, a retired researcher from the Roswell Park Comprehensive Cancer Center, said the song has probably not been heard publicly in Buffalo since at least 1867, when Ketchum died. A chorus from the Buffalo Academy of Visual and Performing Arts will sing it Tuesday, and there will be a ballet performance by student dancers.

The event will also include a salute to Thomas Rizzo, recipient in the 1930s of two Ketchum Medals. He later served in World War II, then returned to become both an accomplished jazz musician and an attorney still practicing law, at 94.

Morrell said generations of high-achieving medalists, such as Rizzo, underline the driving purpose of the ceremony. In a city whose children bring together wildly varied life stories, recipients of the Ketchum medals – not quite 13,000 since the tradition began – blend together as one communal exclamation point.

“What it says is that it doesn’t matter where you come from,” Morrell said.

For Buffalo schools pioneer, a message in an unmarked grave

This year's top winners describe different academic passions. Gardner, the silver medalist, has an affinity for math, while writing does not come as easily to her. Given the choice, she would rather make a spoken presentation than expressing herself with words on paper.

Her dreams revolve around mathematics and science. She wonders about moving toward medical research or a related field in which she could make a lasting impact. Gardner, who runs cross-country and also plays softball and basketball, said she was unaware of the deep heritage of the Ketchum Medal until she learned of it last spring at an assembly.

“It’s really cool,” she said, “that something like this has been happening for so long, with so many different people receiving the medal.”

As for Brumfield, the youngest of six children, the past two months were all about transition. At Harvey Austin, her father, Earl Howard, drove her to school each morning. To reach City Honors she rides a bus each day, and she is quietly sorting out a new routine at a new school.

It is in class and with her books, as always, where she finds her comfort. Brumfield, who reads widely and voraciously, is finishing "The Alchemist" and says "Little Women" will be next. Her mother, Novella Howard, a cashier at an AMVETS thrift store, fills the teen's bookshelf with bestsellers she comes upon at work, such as “Becoming,” Michelle Obama’s autobiography.

Often, when it is getting late at night, Novella goes through a ritual familiar to every parent with a kid who loves to read. She will see a light burning in her youngest daughter's room, and she will call out that it is time to sleep and to let the reading go until the morning.

Brumfield, once the lights go off, cannot shut down her thoughts. She speaks of her concern about such issues as climate change, and she worries about people trapped in desperate situations without hope or a way out. She dreams of someday becoming a journalist, behind the faith that her words might help to shape a change.

Even sleep, for a young writer, is an opportunity.

She drops the book, closes her eyes and lets the words become her music.

Krystal Brumfield in the library at Harvey Austin School, where academic achievement made her recipient of the Jesse Ketchum gold medal for 2019, symbolic of being the top student among all eighth graders in Buffalo. She is now in ninth grade at City Honors. (Derek Gee/Buffalo News)

Krystal Blumfield, 14, at Harvey Austin School, where she became the top student in the district, Thursday, Oct. 17, 2019. She is now in ninth grade at City Honors. She chats with her mother, Novella Howard, left, and Harvey Austin Principal Demario Strickland. (Derek Gee/Buffalo News)