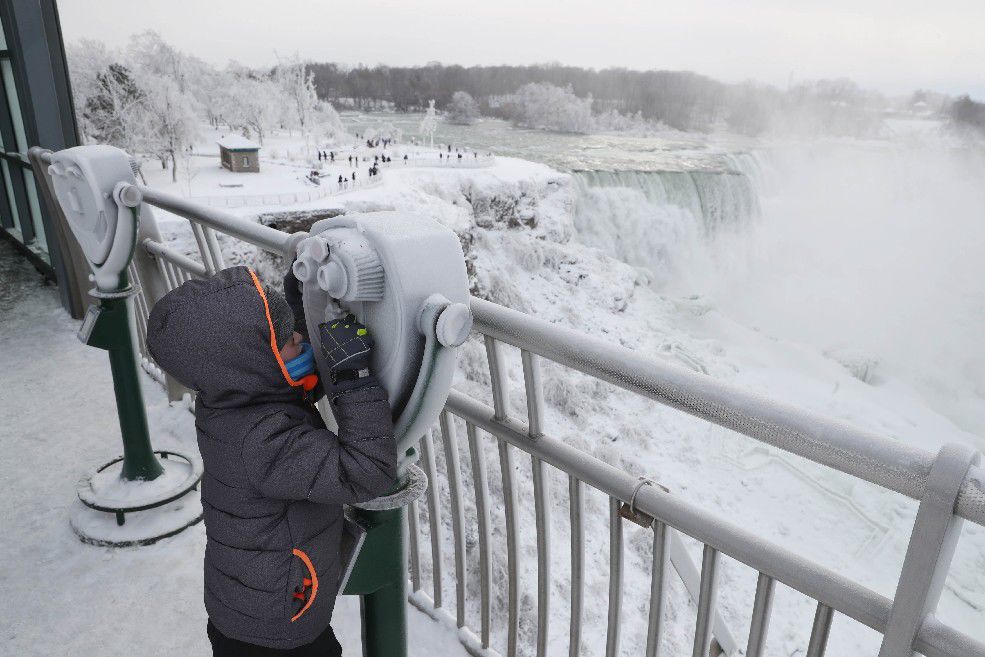 Niagara Falls made international news earlier this month when ice crusted over the cataracts because of the extreme cold, giving it a "frozen appearance." (Sharon Cantillon/Buffalo News) 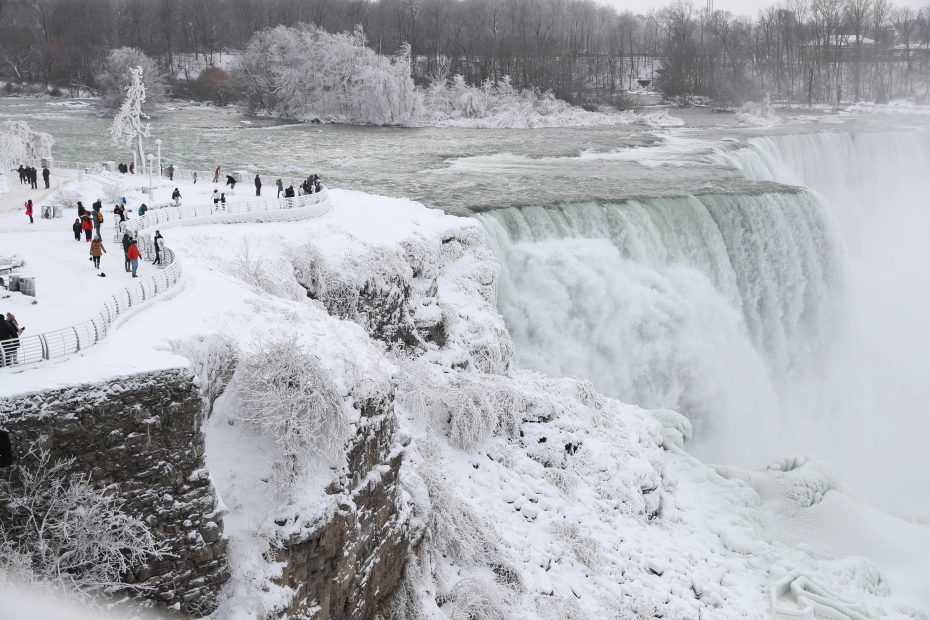 On Saturday, bracingly cold weather in the teens attracted hardy visitors, many with cameras and smart phones in hand, who were marveling at the frosted tree branches, tree trunks swaddled in ice and the swift-moving current as it dropped over the American Falls in a shroud of mist.

"It's so beautiful," said Zieong Zhang, who drove for seven hours from Jersey City, N.J. with his friend, Qichen Sun of Guangzhou, China, to see the falls. Having done so, they were getting ready to drive back.

"I came here in the summertime four years ago," Zhang said. "It was good, but it wasn't like this. This is just outstanding, with all the snow, and the trees coated like sugar."

Sun also relished the sights: "I'm not an English speaker, and I can't use a lot of words to describe this, but it's really amazing."

The frigid weather has meant pictures of a "frozen Niagara Falls" – though the river and cataract are unaffected – are appearing around the world, including in media outlets in England and India. It is the mist from the plunging water that freezes as it lands on the surrounding rocks, railings and everything else.

Temperatures are expected to stay in the teens or single digits at the falls for the next week, according to meteorologist Jon Hitchcock of the National Weather Service.

"The falls are amazing," said Ivan Martinez of Hyattsville, Va., after posing for a group picture with his parents and six brothers and sisters.

"We came here when we were kids in the summer or spring, but it wasn't the same," he said. "It's a whole totally different view now. I can't wait to see it later with the lights."

A.J. and April Maloney – Buffalo transplants living north of Pittsburgh with their children Sarah, 10, and Jack, 8 – drove out on a whim.

"We saw all the frozen stuff on the news last night, and we wanted to bring the kids up to see it," April Maloney said. "It looks great."

Oto Laco, of Honduras, said Niagara Falls "was a beautiful place, it's cool," while visiting with friend Destiny Figueroa of Newark, N.J.

"It is my first time here, and it is breathtaking, let me tell you," Rodriguez said. "The falls and the trees covered in snow are magnificent.

"It is way better than I thought, and I had high expectations," he said.

Inez Rodriguez, Daniel's niece from Queens, was also taken by the view. "I would have loved to have been here in summer, but this is amazing," she said.

Tina Palmer of Niagara Falls brought her niece and two nephews, all living in Tennessee, to see the falls, which because of its popularity and beauty is mistakenly believed by many to be one of the "Seven Wonders of the World."

Archie Palmer had seen the falls in warm weather, but that, he said, was a very different experience. "I never saw it like this before. It's awesome," he said.

"It's crazy cold out here," declared Kennedy Watkins, even though his jacket and sweatshirt were zipped low, leaving his T-shirt visible.

"I love this," Tina Palmer said. "You cannot miss the trees – it's a winter wonderland."

Scenes like that brought Chad and Jenn Howe and 8-year-old daughter Kaity out into the cold from Medina.

"We're all nuts!," Jenn Howe said. "It's absolutely beautiful, and I came out here even though I hate the cold. Pictures don't do it justice."

The driver, whose name was not provided, was issued a traffic summons for failure to exercise due care in the crash that happened shortly after 8 p.m. Aug. 29.

A veteran EMT missed a paperwork deadline. The state is forcing him to retake beginner training

“All the missed time from family and sleepless nights responding to EMS calls apparently means nothing to the New York State Department of Health," Ryan O’Connor told The Buffalo News.

Niagara Falls made international news earlier this month when ice crusted over the cataracts because of the extreme cold, giving it a "frozen appearance." (Sharon Cantillon/Buffalo News)