When the ride-share giant Uber sold its bike unit in May, the company was left with a difficult problem: tens of thousands of unwanted electronic bikes, worth many millions of dollars.

Uber initially planned to scrap the red bikes, which operated under the brand name Jump. But following international condemnation from bike advocates, a portion are instead coming to Western New York via Shared Mobility Inc., a national transportation nonprofit based in Buffalo.

The organization has received 3,000 e-bikes from Uber, it plans to announce Sunday, roughly half of which are already awaiting deployment in an East Side warehouse. Shared Mobility plans to use many of those bikes to build out what it calls "transportation libraries": free, community-led hubs that loan out bikes, e-bikes and scooters, essentially expanding the reach of public transit.

Such programs have been proposed in Chicago and other cities, but this would be the "first of its kind at this size," said Michael Galligano, Shared Mobility’s CEO.

"We believe that access to affordable, healthy and environmentally friendly transportation is a human right," Galligano said. " ... This is a huge opportunity to help a lot of people."

While details on the proposed program are sparse, there’s little question that some residents in the region could use additional transportation. Twenty-eight percent of City of Buffalo households have no car, according to the most recent census estimates, and regional planners and transit advocates have long indicated an interest in expanding the area's transit options.

In one 2017 report, researchers with the Partnership for the Public Good, a left-leaning think tank affiliated with Cornell University, concluded that infrequent bus routes in parts of the East and West sides made it more difficult for residents of those areas to access the region’s employment centers. Since then, a growing number of city residents have taken jobs in the suburbs, where public transit runs less frequently, economic geographer Russell Weaver wrote last December.

By Russell Weaver According to the most recent data released by the U.S. Census Bureau’s employment statistics program, there were 117,669 private-sector jobs in the City of Buffalo in 2017, up from 116,318 in 2010 (plus 1.2% over seven years). Despite this growth, the number of Buffalo’s private-sector jobs held by its own residents fell by more than 5%,

Even when passengers do have a quick route to work, they often face long walks to or from bus and metro stops – an issue known in the industry as the "first and last mile problem."

Bikeshare programs, like the Reddy Bikeshare program Shared Mobility already operates, provide some potential fixes to those problems. So too, in theory, do ride-sharing services, such as Uber and Lyft.

But as Shared Mobility envisions them, the new libraries will improve on both these models by providing free access to over $1 million worth of pedal-assist e-bikes, which are easier to power up hills and over long distances.

That could help commuters who work nights or weekends, when buses run less frequently, or who commute to more remote locations, said Lisa Kenney, an adviser on the Greater Buffalo Niagara Regional Transportation Council who is familiar with the proposed project. It's timely now, she added, as many workers return to offices, stores and other job sites amid the Covid-19 pandemic.

"People still need to get to work – essential workers in particular are often reliant on public transit," she said. "And right now, some people might not be comfortable taking it."

Shared Mobility said it aims to place 1,000 free "micromobility units" across Western New York, including 500 to 600 of the 3,000 e-bikes donated by Uber. The remaining 2,500 bikes will go to the organization’s programs in other areas.

The organization is seeking funding from local governments, transit agencies and foundations to cover the proposed program’s operations, Galligano said. The exact locations and administration of the hubs will also be determined in partnership with local block clubs, social service agencies and other community organizations.

“There are many questions still as to how this will actually work,” Galligano said, “but starting from the beginning, our aim is to launch the library as a community-controlled, community-led initiative.”

"Our goal is to better serve disadvantaged communities in Western New York," he later added.

The proposal comes at a time of rapid change in public transit and transportation. New York State only just legalized e-bikes and scooters in April, following months of lobbying from companies like Uber. Buffalo is still developing regulations for the new vehicles. Shared Mobility will conduct demonstrations and gather public feedback to help policymakers understand these new transportation options, said Galligano.

In February, the City of Buffalo and the Congress for the New Urbanism, a national planning group, also proposed the pilot of a "micromobility corridor" on Washington Street, which would add protected bike lanes, new bus loading zones and other features designed to diversify downtown’s transit options.

Brendan Mehaffy, the executive director of Buffalo's Office of Strategic Planning, said his department is currently finalizing that proposal and plans to release it within the "next couple of weeks." His office was also recently briefed on Shared Mobility's proposed libraries.

"Shared Mobility deserves credit for its pursuit of the e-bike library and in many of its mobility endeavors," said Mehaffy, noting the organization's focus on making cities more equitable.

Despite a Covid-19-related dearth in tourism this year, Reddy Bikeshare – which already had 74 rental stations in Buffalo and Niagara Falls – has seen a 114% increase in ridership.

The Editorial Board: As Western New York makes bicycling safer, it helps to attract younger residents

It should be clear: Making the roads safer for bicyclists makes it safe for everyone, improves quality of life and attracts young people to the area.

City leaders are hopeful Buffalo will be able to chart a more successful course in planning for the future of transportation – one that will include fewer cars, less parking and various modes of transportation in their

Will those convenient, yet controversial, electric motorized scooter sharing services, which are exploding across some areas of the country, be coming to New York by next

You’ve probably seen them, those red bikes around Buffalo. They are locked up in neat rows with bright yellow locks. They are Reddy Bikes, sponsored by Independent Health and ready to roll, thanks to a local system called Reddy Bikeshare. They called to me. “But you have a bike!” my friends said. True. Over the years, though, I’ve had bikes stolen. 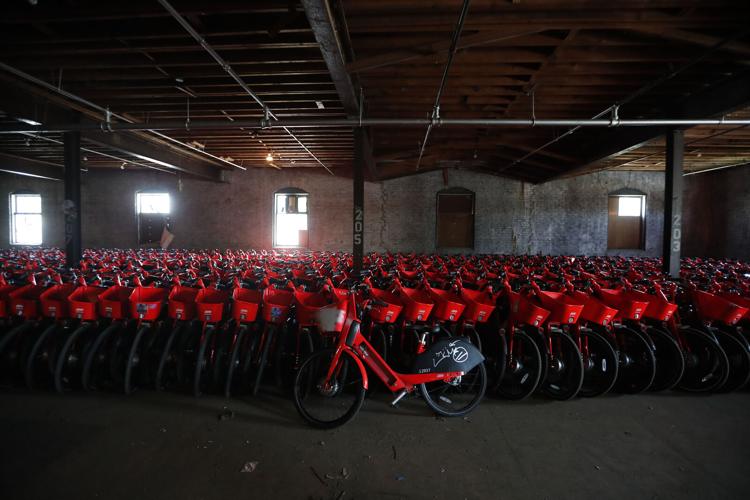 Shared Mobility Inc. e-bikes that are stored in a warehouse in Buffalo, Friday, July 17, 2020. 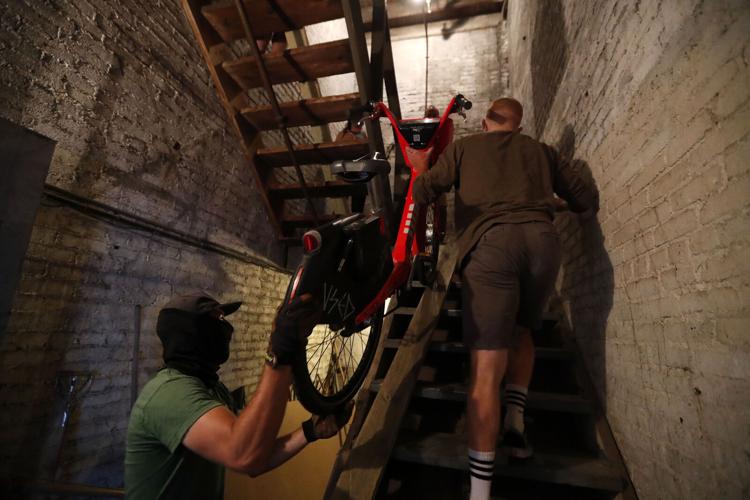 Anders Gunnersen, left, and Nate Schultz, right, and others from Shared Mobility Inc. unload a tractor-trailer of e-bikes that will be stored in a warehouse in Buffalo on Friday, July 17, 2020.