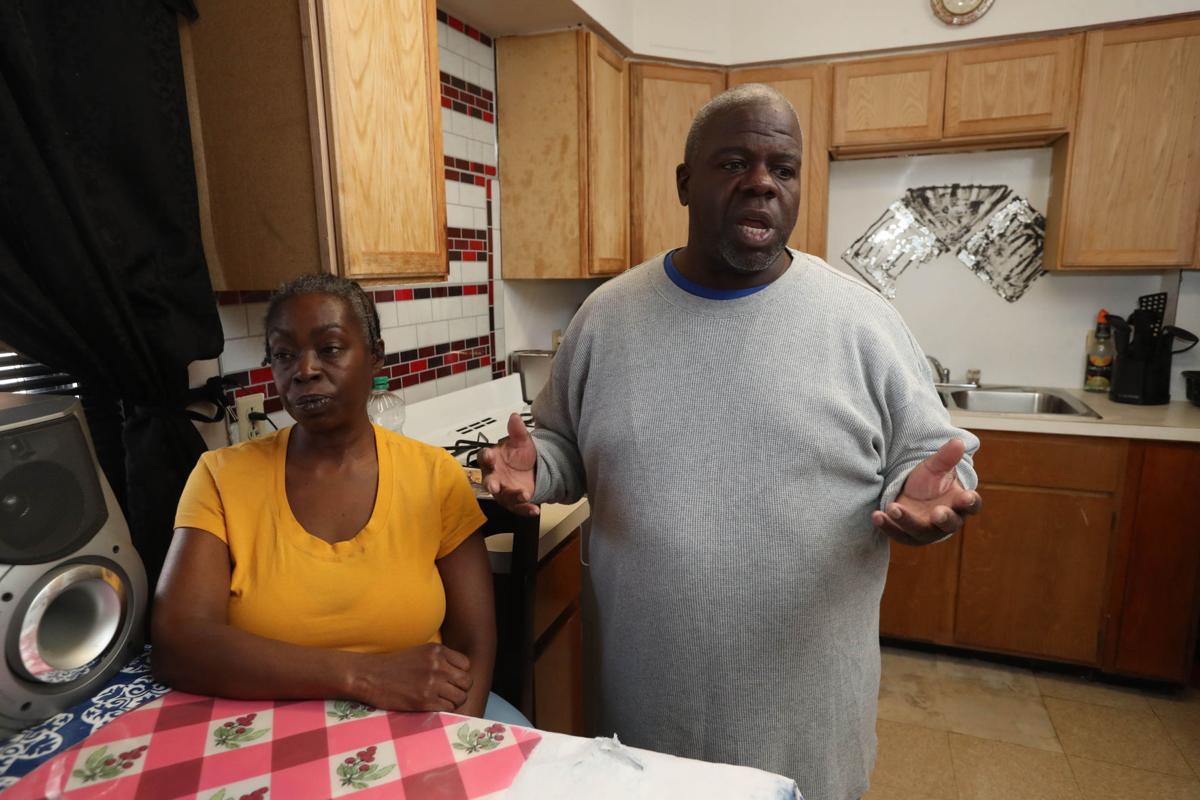 Buffalo Municipal Housing Authority tenants Jacqueline and Gregory Taylor show some of the problems in their Shaffer Village apartment that have not been fixed by the BMHA on Friday, March 1, 2019. (Sharon Cantillon/Buffalo News) 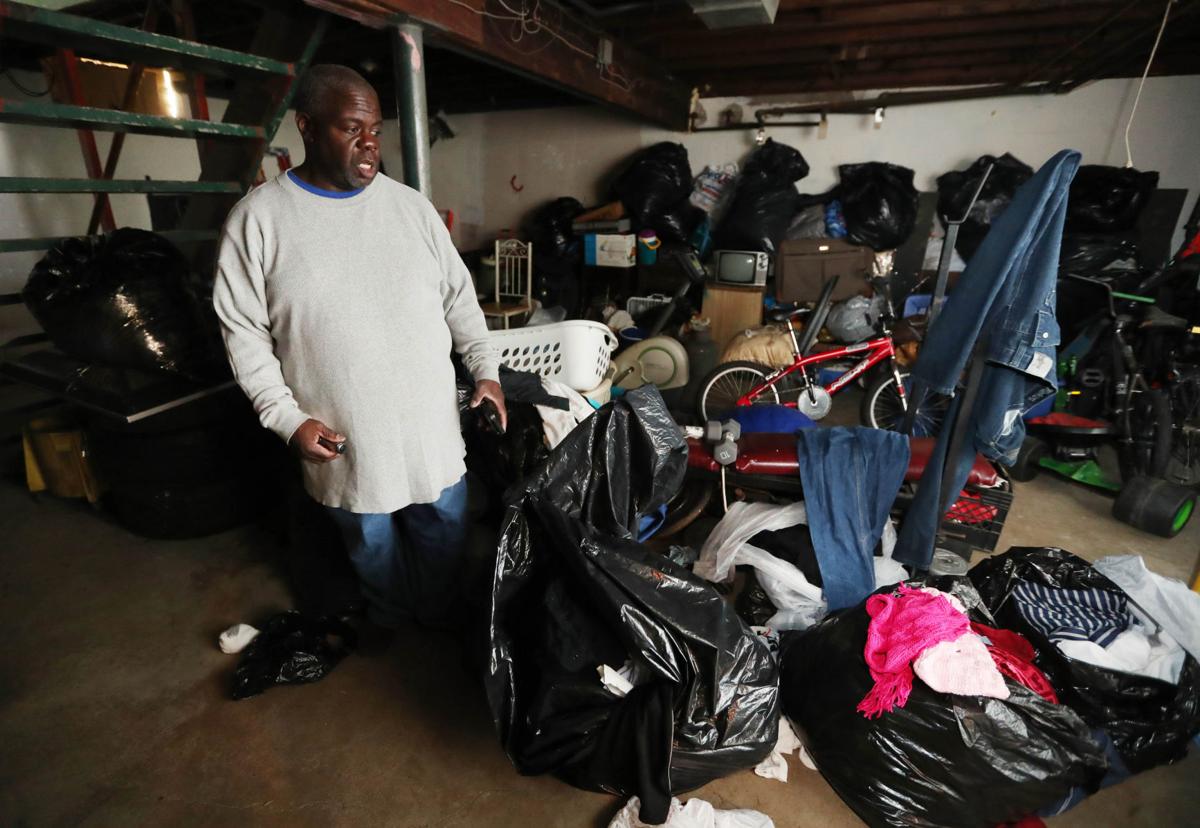 Buffalo Municiapal Housing Authority tenant Gregory Taylor shows clothes, a flat screen TV and other items in his Schaeffer Village basement that he has to throw out because he said the basement floods about twice a month. When other tenants get their drains clogged, the sewer backs up into their basement and no one from the BMHA comes to clean it up, he said. (Sharon Cantillon/Buffalo News)

The Buffalo Municipal Housing Authority ranks among the worst public housing agencies in the nation, according to a new federal assessment.

The BMHA failed its most recent U.S. Department of Housing and Urban Development review with an overall score of 55, according to HUD documents.

As a result, the agency is now listed as "troubled," HUD's lowest assessment category.

The troubled ranking – held by less than 3 percent of 1,800 housing authorities HUD scored during a one-year period – means BMHA will face new requirements, and introduces the possibility of HUD appointing a receiver to run the housing authority if measurable improvements aren't made within two years.

The poor assessment reflects a steady deterioration of the agency's apartment buildings, its yearslong failure to rent all of its units despite a waiting list and its recent reliance on reserve funds to balance its budget, according to the HUD reports and BMHA officials.

Gillian Brown, who was named BMHA executive director in October, said he's optimistic Buffalo's public housing agency will successfully work itself out of the bottom ranking, and will do so well within the time frame outlined by HUD.

"This is not as heavy a lift as it sounds," Brown said. "It requires focus on what needs to be done."

The BMHA has already begun taking steps to upgrade its buildings and increase occupancy, which will also improve the agency's finances, Brown said.

"What this amounts to is a failure of planning," Brown said of some of the BMHA's problems. "We need better planning."

This latest HUD assessment, while completed at the end of 2018 and released in February, is based on the authority's performance in the fiscal year that ended in June 2017, when Dawn Sanders-Garrett was BMHA's executive director.

The 2015 and 2016 scores placed the BMHA in HUD's "substandard" agency category. By dropping below a score of 60, Buffalo is now considered "troubled."

The performance review is the latest in a string of bad news involving BMHA over the past year.

The Buffalo News last year published a series of stories about questionable purchasing practices at the financially strapped housing authority, including:

HUD followed up with a scathing audit confirming The Buffalo News reports, and requiring the BMHA reform its purchasing practices.

Years of putting off maintenance have caught up with the agency, according to Brown, who said he's working to address the problems by restructuring the housing authority's maintenance operation, hiring more workers and using capital funds and public-private financing to upgrade the agency's aging buildings.

The BMHA recently repaired, and will soon replace, elevators at the 10-story LB Johnson Apartments off Humboldt Parkway, where residents had complained that one of their two elevators wasn't working at all, and the other worked sporadically. Some work has been done to fix pitted roads at the Kenfield/Langfield development, and more is planned, Brown said. An exterior maintenance project is currently ongoing at the Stuyvesant Homes, where bricks last month fell from a section of the Elmwood Avenue building.

The BMHA is also planning a substantial overhaul at Shaffer Village off Ontario Street, and is preparing for an overall physical assessment of the agency's 26 developments as the first step in applying for a capital spending loan program that the BMHA hadn't previously taken advantage of, Brown said.

Sitting Friday in their Shaffer Village apartment, Jacqueline and Gregory Taylor talked about the frequent flooding in their basement, sewer backups, inadequate electrical wiring and absence of a hot-water hookup for their washing machine.

The couple agreed their development would benefit from a major overhaul, but warned the BMHA must do a better job maintaining its properties.

The BMHA executive director also discussed his plans to increase the agency's occupancy rate, which it has struggled with for years.

HUD expects housing authorities to have at least 95 percent of their apartments full at all times. BMHA's occupancy – excluding the more than 400 vacant and shuttered apartments at the Commodore Perry complex and A.D. Price Courts – is at 92 percent. That represent 250 apartments that are available, but not rented at any given time.

Including the shuttered Commodore Perry and A.D. Price apartments in the calculations brings the BMHA's vacancy rate down to 82 percent. Brown said he'll be petitioning HUD to remove those properties from the calculations because the units there are not livable and cannot be rented.

The BMHA has a waiting list, Brown said, but the agency has failed to efficiently get new tenants certified to move in after vacated apartments are cleaned up and repaired.

A series of steps is planned for coming weeks to rectify that, he said.

The vacant units are a financial problem for the BMHA.

"Every vacancy ready to be rented is leaving money on the table," Brown said.

Full occupancy at the BMHA – excluding the shuttered Perry and A.D. Price Courts units – would generate an additional $2 million annually in rents and federal subsidies, The News calculated.

Brown noted that the BMHA's current budget anticipated the agency relying on some of its reserves in the first half of this fiscal year, but as of now, that has not been necessary.

The use of reserves was one of the items cited in the HUD performance report.

"There is no doubt that the excitement of the air show brought a new energy and introduced more people to our wonderful waterfront," Erie Canal Harbor Development Corporation Chairman Robert Gioia said.

Erie County Executive Mark Poloncarz announced Sunday that people will no longer need to be vaccinated to attend Buffalo Bills games or other events in the stadium.

Buffalo Municipal Housing Authority tenants Jacqueline and Gregory Taylor show some of the problems in their Shaffer Village apartment that have not been fixed by the BMHA on Friday, March 1, 2019. (Sharon Cantillon/Buffalo News)

Buffalo Municiapal Housing Authority tenant Gregory Taylor shows clothes, a flat screen TV and other items in his Schaeffer Village basement that he has to throw out because he said the basement floods about twice a month. When other tenants get their drains clogged, the sewer backs up into their basement and no one from the BMHA comes to clean it up, he said. (Sharon Cantillon/Buffalo News)