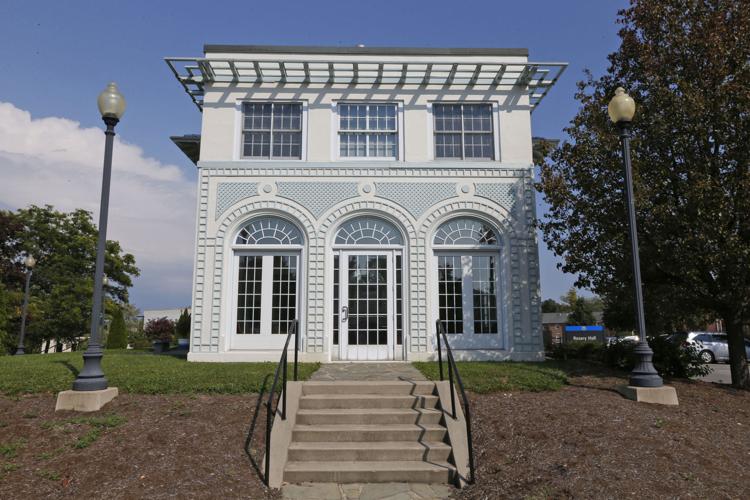 A fine example of Italian Renaissance revival, Rosary Hall on the Daemen College campus in Amherst has been designated as a local landmark by the Town of Amherst Historic Preservation Commission. (Robert Kirkham/Buffalo News) 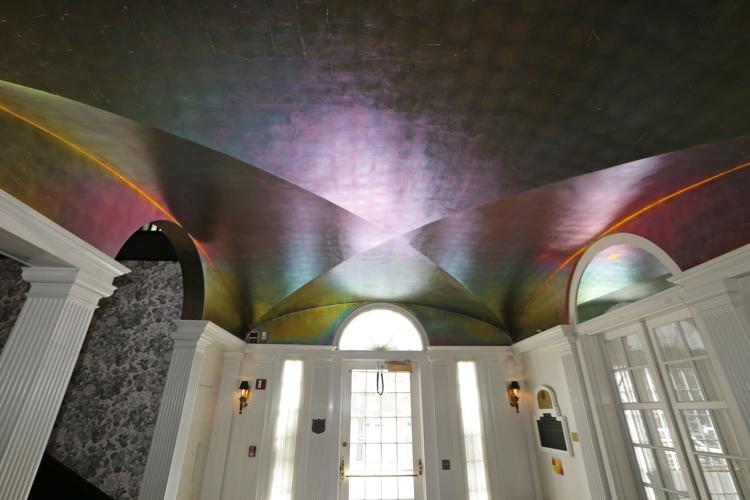 The gold leaf ceiling takes on every color in the spectrum as it gleams and reflects depending on where you're situated in the main lobby of Rosary Hall on the Daemen College campus. (Robert Kirkham/Buffalo News)

Support this work for $1 a month
By Joseph Popiolkowski

Daemen College's roots can be traced back to one building.

The Rosary Hall mansion on the private college's Main Street campus in Amherst was purchased in 1948 by the Sisters of St. Francis and became the Rosary Hill College for women, now Daemen.

"Everything went on there," said Michael Brogan, Daemen's vice president for academic affairs and dean of the college. "That was the college. When people who were on the campus reflect, they think of that building."

George Waite and his wife were the owners when the sisters approached them about selling, according to a history provided by the college. But Waite's asking price of $135,000 was out of their price range and negotiations stalled.

The sisters had a state charter for their new college by August 1947 but no site or building from which to operate. Meanwhile, Waite decided to add $27,000 to his price, to include furnishings, and the sisters ruled it out. Then, suddenly in December, George Waite died.

Today the building stands as an example of the Italian Renaissance style and is noted for its gold leaf ceiling in the main entrance, black Italian marble flooring and French doors and windows throughout.

"The building has great light," said Brogan. "When you walk through the doors certainly the ceiling catches the light so it draws your eyes to it."

The marble was quarried locally and fossils can been seen embedded in the surface, said President Gary A. Olson.

"That building has become, for many of us, a symbol of the high academic quality that Daemen has become known for," he said. "I see it as more than just a building but as a symbol."

Built about 1912 as a residence for insurance man Herbert Crouch, it was designed by George Cary, a prominent Buffalo architect, who also designed the Buffalo History Museum, the Pierce-Arrow administration building, Buffalo General Hospital, and several buildings on the University at Buffalo’s South Campus.

Formerly known as Alswych Hall and the Crouch-Waite Mansion, it was the main property on the 29 acres that encompassed 4380 Main St. Surrounded by orchards and vineyards, the mansion included an adjoining garage and penthouse, known today as Serra Hall.

Every inch of the building was used when the first 44 students enrolled at Rosary Hill. The upper floors were offices and art studios. The basement housed the cafeteria. The parlor became the library and the sunroom held periodicals.

As students and faculty outgrew the building, Rosary Hall became a residence for the sisters. Then, by the late 1970s when Brogan was a student, it was used primarily for storage.

"Everyone would always wonder, 'Why isn't this building utilized?' " he remembered. "It had such striking features and design but no one had ever been in there."

Twenty years ago the mansion underwent a $1.8 million restoration led by Daemen's fourth president, Martin J. Anisman, and retired vice president for business affairs Robert Beiswanger, that returned it to its 1940s glory.

"Since that renovation it's really taken on the role of being the focal point of the campus," said Brogan. "To me, what strikes you is the warmth the building provides and its historical roots."

The sunroom, or solarium, is Olson's favorite room, good for holding meetings.

And his favorite feature of the sunroom is the hand-carved marble fireplace.

"You can't find anybody who can make a hand-carved marble fireplace nowadays," he said.

In 2014 Rosary Hall was named a local landmark by the town Historic Preservation Commission. Today it houses the college's admissions offices and the college external relations staff on the campus of nearly 3,000 students and 600 employees. Most important events are held there.

Every December, college officials host a holiday fundraiser in Rosary Hall for about 80 people, all that will comfortably fit.

"The guests will always comment on how beautiful that building is and how comfortable, warm and inviting it is," said Brogan. "It really is a nice feeling."

It did hurt, and still does, and it hurt more than the losses from the past. Here’s five reasons why.

The chilly relationship between Byron Brown and Mark Poloncarz gets frostier

Questions linger about how the city and county can work better together to improve emergency response, and save lives, when Brown and Poloncarz don't engage in serious policy discussions at a high level.'

Workers allege that Postal Service managers on Dec. 23 ignored warnings about the ferocious nature of the storm before finally allowing them to stop mail deliveries. They also allege management ordered them to vacate the Williamsville Postal Station and drive home in dangerous conditions.

Revealed in the 56-year-old reports on the murder of Monsignor Francis J. O'Connor were shocking secrets – a priest and a diocese journalist had been suspects – and a cache of other never-before released details.

The lighter side of The News: WGRZ's Scott Levin takes the cake; Buffalo Place waiting on weather

This week's Off Main Street features a funny moment on WGRZ about king cakes and an item about how the weather has caused woes for Buffalo Place.

There's no ice on Lake Erie: Does that mean we'll get more lake-effect snow?

The lawsuit concerns the tribe’s longstanding claims that a 1954 land deal permitting the Thruway to cut through part of its Cattaraugus Reservation was illegal.

James R. Metcalfe II, the director of the Western New York National Cemetery in Pembroke, has filed a civil suit, accusing the VA and its leaders of discrimination and retaliation that stripped away many of his responsibilities.

A fine example of Italian Renaissance revival, Rosary Hall on the Daemen College campus in Amherst has been designated as a local landmark by the Town of Amherst Historic Preservation Commission. (Robert Kirkham/Buffalo News)

The gold leaf ceiling takes on every color in the spectrum as it gleams and reflects depending on where you're situated in the main lobby of Rosary Hall on the Daemen College campus. (Robert Kirkham/Buffalo News)