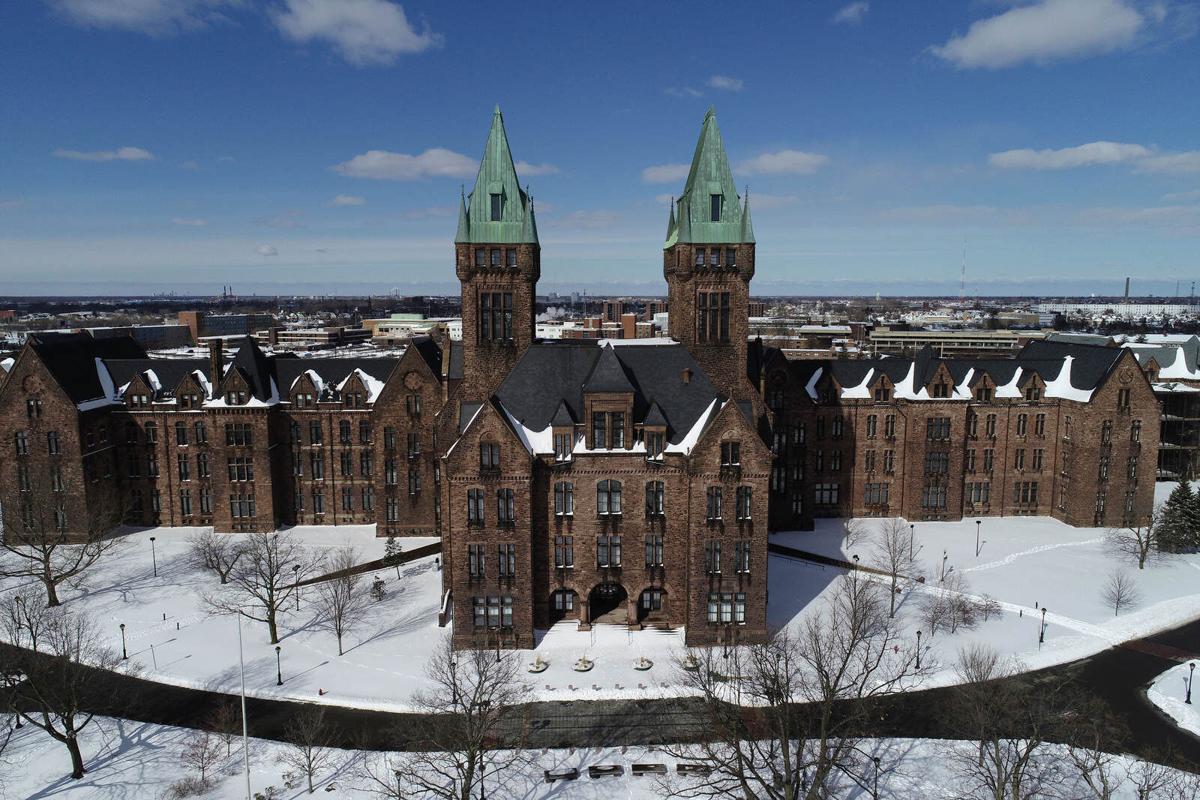 The iconic towers of the Richardson Olmsted Campus, where Hotel Henry Urban Resort Conference Center recently announced it was closing. Couples who had booked weddings there say they've been told their deposits won't be returned. 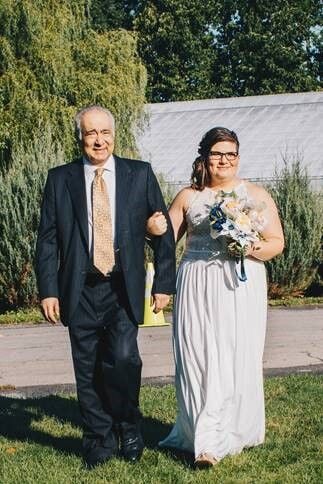 Saied Behzadi escorts his daughter, Kimberly, down the aisle at a private wedding ceremony held before his death from pancreatic cancer in January. Kimberly Behzadi and her husband, Dan O'Reilly, are among scores of couples whose weddings or receptions booked at the Hotel Henry are canceled with the venue's closing. The couple said they are out $12,000 paid to the hotel, much provided by her late father. 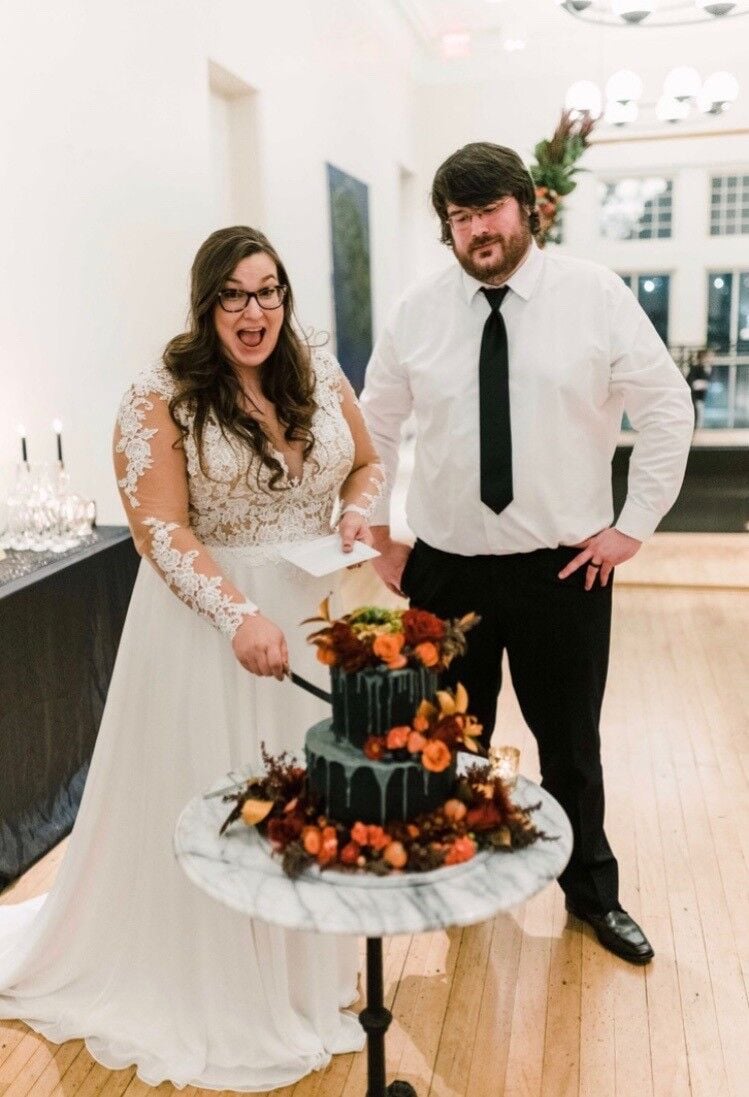 Gabi DiBella and her husband, Kyle Little, at a small reception held at the Hotel Henry in October. They planned to hold a larger reception in October 2021 that now is canceled with the hotel's closing. The couple also believes they have lost $2,875 paid to the hotel but awaits official word Sunday.

Last June, Kimberly Behzadi and Dan O’Reilly moved their planned wedding at the Hotel Henry Urban Resort Conference Center from September 2020 to August of this year. One month later, the couple made their third installment toward the cost of the event, bringing the total paid to $12,000.

They didn't hear anything more from Hotel Henry until Tuesday, when an email informed them the venue was shutting its doors for good. In a terse phone conversation, a woman speaking for the hotel told them their money – much of it provided by Behzadi's father, Saied, before he died in January from pancreatic cancer – was gone.

Not just the initial $2,000 down payment – everything they’d paid was classified as a “deposit,” lost for good.

“It was like getting kicked in the gut,” Kimberly Behzadi told The Buffalo News.

Hotel Henry's abrupt closing, a situation the owners blamed on the pandemic's economic fallout, has left in the lurch Behzadi and O'Reilly and scores of other couples planning weddings later this year or in 2022. In interviews, they say the hotel's management has provided little concrete information beyond revealing in phone calls they won't have their deposits and other payments returned to them.

It's not clear what their legal options are if they want to challenge the hotel's decision on the deposits. So couples are now scrambling to find new venues for their wedding receptions, reschedule with photographers and other vendors and wondering whether they can move forward without the thousands of dollars lost to Hotel Henry.

"This news feels like we got a bomb dropped on us," said Emily Ricotta, who is struggling to rebook her wedding and has paid $5,750 to Hotel Henry that won't be returned.

Hotel Henry opened in April 2017, the first business on the historic Richardson Olmsted Campus on Forest Avenue since the state provided an initial $76.5 million to revive the abandoned, colossal-sized 19th-century asylum and National Historic Landmark.

Much of that money went into stabilizing and renovating the three buildings occupied by the hotel that are centered around the signature red sandstone towers on the property.

Co-owner Dennis Murphy of INNVest Lodging previously told The News that 2020 was shaping up to be the hotel's best year of business. Then the Covid-19 pandemic hit, dealing a devastating blow to the hospitality and related industries.

Hotel Henry received $666,237 in federal Paycheck Protection Program loans last year, allowing the business to retain 132 jobs, records show. But Murphy by October was warning the pandemic may prompt the venue to close at least temporarily.

And, in another sign of trouble, five current or former employees recently sued Hotel Henry and its owners, alleging management kept hundreds of thousands of dollars in wages, tips and commissions that should have gone to workers.

Murphy did not immediately respond to a message Saturday seeking comment. An email sent by Hotel Henry management to couples with scheduled weddings blamed the closing entirely on pandemic-related business losses.

Ricotta and her fiancé, Steve Phillips, had booked Hotel Henry in October 2019 for a wedding planned for June 6, 2020. Around the time last year the state imposed widescale restrictions on events and other activities, they decided to rebook for June 12 of this year, said Ricotta. They paid a $2,000 deposit and $3,750 installment to Hotel Henry.

But then Ricotta read the Buffalo News articles about Hotel Henry's financial struggles and the employee lawsuit and began to worry about their planned wedding. Then, in January, an email seeking reassurance received an auto-reply that Hotel Henry was on "winter recess" until Feb. 15 and unable to respond until then.

The next day, she saw a news report on the closing and, five minutes later, received an email with the official announcement.

Ricotta, who lost her job last year and married Phillips in a small ceremony to be able to go onto his health insurance, said another co-owner, Diana Principe, briefly talked to her Saturday and said the money won't be returned because the funds are "depleted."

"All of the Covid couples have gone through so much this year," she said. "For someone to essentially rob you of thousands of dollars and rob you of what you imagine your special day to be is just so devastating."

Syrie Roman, the Social Maven event and wedding planner, said she had an inkling something wasn't right at Hotel Henry as early as last summer because it became "next to impossible" to get anyone there to respond to phone calls and emails.

In October, clients who live in New York City tried to mail a signed contract and $2,000 deposit for a planned June 18, 2022, wedding and reception to Hotel Henry and received the envelope marked return to sender at the end of November.

"We feel they knew back in October that this was their likely fate, and let us book and led us to believe we had a venue secured," said Jason MacLean, who was planning to marry his fiancé, Ryan Latulipe, at Hotel Henry next year, adding, "Thankfully we were lucky and did not lose any money."

The email sent by Hotel Henry asks recipients to schedule a time when a hotel representative can discuss "your event, your deposit and possible options," according to a copy provided to The News.

Gabi DiBella, a lawyer in Syracuse, originally booked Hotel Henry in February 2020 for an Oct. 31, 2020, Halloween-themed wedding. With concerns about Covid-19, she and Kyle Little got married at a church and had a small reception at Hotel Henry that date and made plans to hold a larger reception one year later.

The couple paid a $1,000 initial deposit and $1,875 more last April, for a total of $2,875 now held by Hotel Henry. DiBella, a Buffalo area native, has a call with the hotel scheduled for Sunday when she expects to hear the money won't be returned.

"I don't know what they did with the money," DiBella said, adding, "It's absolutely not fair."

DiBella said she believes the hotel will hang its argument on the "force majeure" clause in their contract, claiming the closing was driven by factors out of the hands of its operators, a position she rejects.

EVL Events owner Sam Nelson, who is working on DiBella's wedding, said another one of her clients did receive communication from Hotel Henry asking for an address where a deposit refund can be mailed.

Theo Wheeler, one of the owners of Buffalo Wedding Magazine and related properties in Rochester and Syracuse, said wedding deposits are, generally speaking, non-refundable but couples need to look at the specific language in their contracts.

It's not clear whether the state Attorney General's Office will intervene, as it did after the closing of Hearthstone Manor in 2014, obtaining $45,000 in full deposit refunds paid for through the proceeds of the sale of the Depew property. A spokeswoman declined comment on Saturday, but urged Hotel Henry clients to file a complaint with the office.

Wheeler said he knows this is a stressful situation, but he believes there are enough wedding venues in Buffalo to accommodate the Hotel Henry couples.

The pain is magnified for Kimberly Behzadi, who held a private wedding ceremony that allowed her dying father to walk her down the aisle while he still could.

One of her father's last acts was to help pay for the planned larger event at Hotel Henry, which has $12,000 of their money.

“To be told it’s gone, not even five weeks after he passed, feels like someone took the money from my dad's grave, put it in a garbage can and lit it on fire. It really hits a whole other level, because we're still grieving,” she said. “It's very fresh.”

The developer said he'll do this for the couples regardless of whether he takes over operations of the hotel on the Richardson Olmsted Campus site.

71 customers to receive total of $45,000 for deposits on wedding receptions, other

Hearthstone is set to close March 7 after 48

The iconic towers of the Richardson Olmsted Campus, where Hotel Henry Urban Resort Conference Center recently announced it was closing. Couples who had booked weddings there say they've been told their deposits won't be returned.

Saied Behzadi escorts his daughter, Kimberly, down the aisle at a private wedding ceremony held before his death from pancreatic cancer in January. Kimberly Behzadi and her husband, Dan O'Reilly, are among scores of couples whose weddings or receptions booked at the Hotel Henry are canceled with the venue's closing. The couple said they are out $12,000 paid to the hotel, much provided by her late father.

Gabi DiBella and her husband, Kyle Little, at a small reception held at the Hotel Henry in October. They planned to hold a larger reception in October 2021 that now is canceled with the hotel's closing. The couple also believes they have lost $2,875 paid to the hotel but awaits official word Sunday.